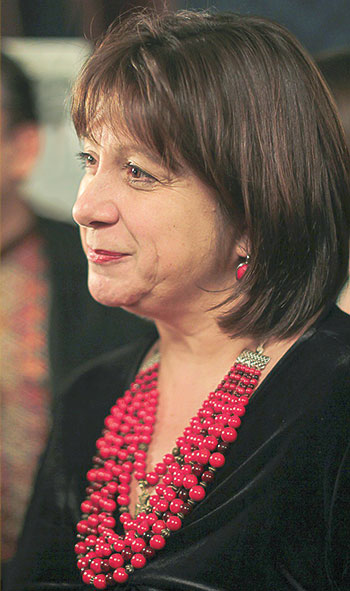 KYIV – Ukraine’s Minister of Finance Natalie Jaresko on March 22 released a statement declaring her readiness to assemble a team of technocrats for a government that “is able to work in the interest of the whole country, all its citizens, not some political or business groups.”

The statement came in the wake of reports that Ms. Jaresko was among the top candidates for prime minister to replace the embattled Arseniy Yatsenyuk.

Following is the text of Ms. Jaresko’s statement, translated from the original Ukrainian by the Ukraine Crisis Media Center.

There comes a time when politics needs to be great, so that the whole country comes together to address fundamental issues for its future. Ukraine has chosen its strategic path. I believe that the Revolution of Dignity was a Rubicon for the Ukrainian people. People believed in their strength to change the system in favor of ordinary people and decent human values of respect and freedom. The path from revolution to actually producing concrete results for Ukrainians’ European future is long and complex.

Today a serious political crisis stands in the way of the country’s progress. A few weeks ago, the President of Ukraine Petro Poroshenko and Prime Minister Arseniy Yatsenyuk suggested I start a dialogue to formulate a plan to decisively overcome the current crisis. In recent weeks, there have been many different rumors and speculation, so I decided to share my thoughts on the matter.

In Ukraine, it is time to “depoliticize” economic processes and concentrate the best talents and resources to solve the unprecedented challenges facing the country. For this purpose, the Ukrainian government should focus on two key issues: restoring public confidence and economic growth. Giant strides, not baby steps, are needed.

In my opinion, only a technocratic government can address these challenges. The new team must “belong” to nobody other than the people of Ukraine. New leaders should have no political past or, indeed, have no desire for any political future. The team must not be subject to the domination of the oligarchs or any politicians’ “friends.” I am ready to assemble such a team that right now is able to work in the interest of the whole country, all its citizens, not some political or business groups.

In my understanding, a technocratic government is a government formed on the basis of five fundamental principles:

1. Members of the government should be devoted exclusively to serving the people of Ukraine; not themselves or their party, or vested interests. The main criterion for team members is an impeccable reputation.

2. Members of the government must be completely intolerant of corruption and political interference in the work of executive authorities.

3. Members of the government should be concerned neither about participation in the next elections, nor about their own political careers. Their sole purpose shall be to create prosperity in Ukraine. Populism is the worst enemy in this regard.

4. They all should believe that Ukraine can be successful only through democratic and economic freedoms, in particular, through the implementation of the EU-Ukraine Association Agreement and IMF program.

5. Members of the government should be experienced crisis managers and have experience in successful reforms and organizational management.

For the government of technocrats to work, it must have the support of at least 226 votes in Parliament with the aim to implement the EU Association Agreement and IMF program, or an additional coalition agreement that would ensure conducting all reforms under these international obligations. Our Central and Eastern European partners have already lived through the hard but effective path of reforming their economies. This path helped create decent living standards for their citizens. This is the path Ukraine needs to follow, instead of allowing ineffective discussions to replace real reforms.

The more successful we will be, the more people’s confidence will be repaired and the greater support we will receive from our international partners, without whom it is impossible to conduct fundamental structural reforms. Today the world is looking at Ukraine with some disbelief, questioning our ability to fight the disease of corruption and to create a healthy foundation for a decent future for millions of Ukrainians. Each day of honest government is an opportunity to prove that the national interest is more important than political pressure or business connections. This is an opportunity to begin the process of restoring people’s confidence in government.

We are working toward a common goal. Every citizen has the right to be served by responsible government, be subject to fair rule of law and conduct clean business without undue pressure from state authorities. Each of us has a personal responsibility for laying the foundation of a strong Ukrainian economy despite the war. Only in collaboration with civil society and responsible independent media can we achieve the changes that will enable us to build a decent future for all our citizens.

Nothing should distract us from this goal. The government should focus on implementing the maximum number of reforms to modernize the Ukrainian economy. Ukrainians have sacrificed too much for a better future. We have to save the country now. That is why right now, without delay, we must restore citizens’ confidence and ensure economic growth.

I have never sought a high position of political power and have no plans or desire to make a political career in the future. My only desire is to conduct reforms in Ukraine that will ensure economic growth, the development of a democratic society and promote the welfare of every Ukrainian.