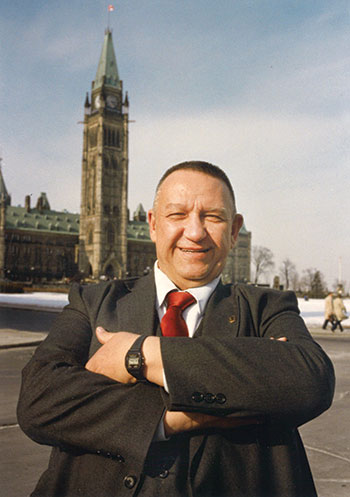 John B. Gregorovich in 1996 in front of the Canadian Parliament in Ottawa.

OTTAWA – The Ukrainian Canadian community is mourning the loss of a community leader who inspired others to follow in his footsteps, regardless of the odds, to serve the Ukrainian Canadian people. John B. Gregorovich, known to many as “JB,” lived a life of commitment, leadership and perseverance in the face of discrimination, injustice and deceit. His life was dedicated to serving and supporting Canada’s Ukrainian community. Mr. Gregorovich died on September 26 at the age of 89.

“It is with deep sadness that I extend condolences to the family and friends of John B. Gregorovich,” said UCC National President Paul Grod. “He was a man of exceptional courage, integrity and acumen. John was stalwart, intense, passionate in his commitment, yet also good-humored, encouraging and supportive of the next generation of activists. Canada and our Ukrainian Canadian community has truly lost an important leader.”

Mr. Gregorovich was the son of the founder of the Ukrainian National Federation, and a lawyer by profession. In 1984 he accepted the challenging task of standing as chairman of the Ukrainian Canadian Congress’ Civil Liberties Commission (CLC), the group organized to represent the Ukrainian Canadian community before the Commission of Inquiry on War Criminals headed by the late Justice Jules Deschênes. He competently steered that group through a trying period of several years during which time the community found itself targeted by those who alleged that Nazi war criminals and collaborators were being hidden in their midst. Under Mr. Gregorovich’s direction the CLC successfully put forth the Ukrainian Canadian community’s position, namely that any war criminal found in Canada should be brought to trial in a Canadian criminal court of law. That remedy was eventually adopted by the government of Canada and announced in the final report of the Deschênes Commission.

Mr. Gregorovich later founded the Ukrainian Canadian Civil Liberties Association, which together with the UCC and the Ukrainian Canadian Foundation of Taras Shevchenko, would spearhead the campaign for acknowledgement and redress. In 2008 this resulted in the government of Canada establishing the Canadian First World War Internment Recognition Fund, a $10 million endowment that continues to support educational and commemorative projects recalling Canada’s first national internment operations.

A veteran of the Canadian Army, Mr. Gregorovich also served as the last president of Branch 360, the Konowal Branch of the Royal Canadian Legion, which placed plaques across Canada honoring Cpl. Filip Konowal, the only Ukrainian Canadian awarded the Victoria Cross, the British Empire’s highest military distinction, for his valor in August 1917 at the Battle of Hill 70, near Lens, France. In 1985 Mr. Gregorovich led the group that also placed a plaque in London to remember the sacrifices of the Ukrainian Canadian women and men who served voluntarily in the Canadian armed forces during World War II – whose efforts during and after that conflict played a significant role in saving Ukrainian displaced persons and political refugees from forcible repatriation to the Soviet Union.

Funeral services for Mr. Gregorovich were on September 30 at All Saints of Ukraine Chapel in Oakville, Ontario; burial was at Woodland Cemetery in Hamilton.