English (Dima Yaroshenko) and Julia (Polina Snisarenko) on a train in a scene from “Julia Blue.”

It seemed like yesterday that a little girl with blonde pig tails came over to our home in Parma, Ohio, to play with my daughter Larissa and her little brother Marko. They were a creative little bunch who played out their make-believe stories in our wooded backyard. But there was a difference in how the little blonde girl played with my children. Not only did she participate in their play, but she would tell them how to play, what to do and how the story should proceed. When we bought our first video recorder, the play acting turned to “film-making,” and thus her first movie attempts were made. That little girl was Roksolana Toporowych, affectionately known as “Roxy.” 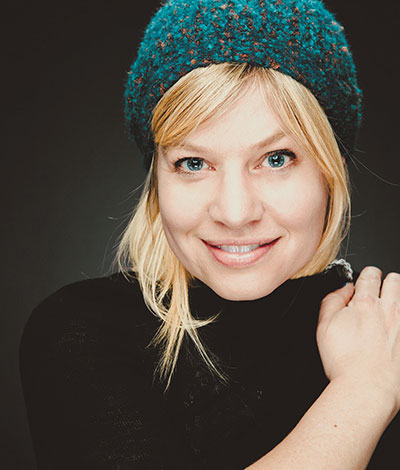 At the encouragement of her mother, Olenka Toporowych, Roxy enrolled and was accepted at New York University’s prestigious Tisch School of the Arts, where she received her degree in film and television. Her first film at NYU, “The Immigrants,” was a short film, with my son and daughter in lead roles. To this day we laugh at the comic drama of two young wide-eyed Ukrainian immigrants arriving in New York City for the first time. Even the music in the background is perfect, reinforcing the expressions of wonder in their young faces.

Upon graduating from the Tisch School of the Arts in 1998, Ms. Toporowych began working in film and TV production as well as at the prestigious Sundance and Tribeca film festivals. Some of her roles included set decoration on projects such as “Captain America,” “The Other Guys,” “Winter Soldier,” “A Most Violent Year” and “Saturday Night Live,” and as assistant set decorator on “Marvel’s The Punisher” and on “Luke Cage.” She has also worked on documentary film projects such as Hulu’s “Batman and Bill” and HBO’s feature “Believer.” Other projects have included the Oscar-nominated film “In the Bedroom” and David Duchovny’s film “House of D,” where Ms. Toporowych landed a small part in the film. Most recently, she worked on Steven Spielberg’s “West Side Story,” which is set to premiere in December.

While gaining experience, Ms. Toporo­wych’s dream of directing her own film was ever present. Growing up Ukrainian and active in her community, her ethnic experiences left an indelible mark on her passion and character. Ms. Toporowych attended Ukrainian school, was a member of Plast Ukrainian Scouting Organization and danced with Kashtan, Cleveland’s Ukrainian folk dance ensemble.

Her love of dance led her to the idea of creating a documentary on Ukrainian folk dance in America. After meeting and interviewing prima-ballerina Roma Pryma Bohachevska, the artistic director and choreographer of New York City’s Ukrainian dance ensemble Syzokryli, the filming of Ms. Toporowych’s new documentary began. After 250 hours of filming, the 70-minute documentary, “Folk,” was born; it premiered in 2011.

Maidan and the war

From 2012 to 2014, Ms. Toporowych was the program director of the American Independent Film Festival in Kyiv, sponsored by the U.S. Embassy. She attended the festival in Kyiv in December 2013, and subsequently witnessed the revolution known as “the Maidan” and the toppling of the Lenin statue by the demonstrators. She absorbed the energy that pulsated in the streets as people demonstrated against their corrupt president and government.

During this time, Ms. Toporowych was introduced to Sashko Roshchyn, a cinematographer and graduate of the Kyiv National University of Cinema. Their conversation immediately turned to film. The Ukraine film scene was active, feeding on the ongoing Maidan revolution. Meeting Mr. Roshchyn was the beginning of an amazing friendship and collaboration for the next two years.

The months that followed were devasting for Ukraine. The frontline protesters were attacked and killed, Russia annexed Crimea, and Vladimir Putin’s forces invaded the Donbas region in eastern Ukraine. Ukraine was at war.

Ms. Toporowych returned to Kyiv for a second time in September 2014 after winning a Fulbright scholarship in June of that year. For over a year in Kyiv, she witnessed the ravages of war in her ancestral homeland.

In Ms. Toporowych’s own words: “… this wasn’t just happening in a far-off land, I didn’t just read about it online, this war was happening right around me – just a train ride from Kyiv to the heart of the front-line. Every day I experienced a visual assault – soldiers returning home, volunteers collecting goods, refugees looking for shelter.”

Six months into her stay, Ms. Toporowych became intrigued by growing volunteerism in Ukraine, especially in support of returning wounded soldiers. The trauma they had suffered would leave physical as well as mental scars, both conditions in desperate need of treatment. At this point, Ms. Toporowych realized she too must contribute to Ukraine and her people. She knew she could best accomplish this by telling a compelling story through film that would ultimately take the form of a love story in a time of war. ‘Julia Blue’ was my love letter to Ukraine,” Ms. Toporowych says.

Ms. Toporowych shared her story ideas for “Julia Blue” with her new cinematographer friend, Mr. Roshchyn, and met with Ukrainian soldiers whose insight provided authenticity to her story. She was granted permission to visit the actual Main Military Hospital in Kyiv. “Julia Blue” was written in three months, and the first draft of the script was completed six weeks later.

By mid-June of 2015, a second draft of “Julia Blue” was completed. At that point, New York producer Nilou Safinya joined the team. Back home in the U.S., Luba Keske from Los Angeles joined as the associate producer and helped promote the film among Ukrainian communities. In September, Ms. Safinya flew to Kyiv to start production on “Julia Blue,” one year after Ms. Toporowych first landed in Kyiv. 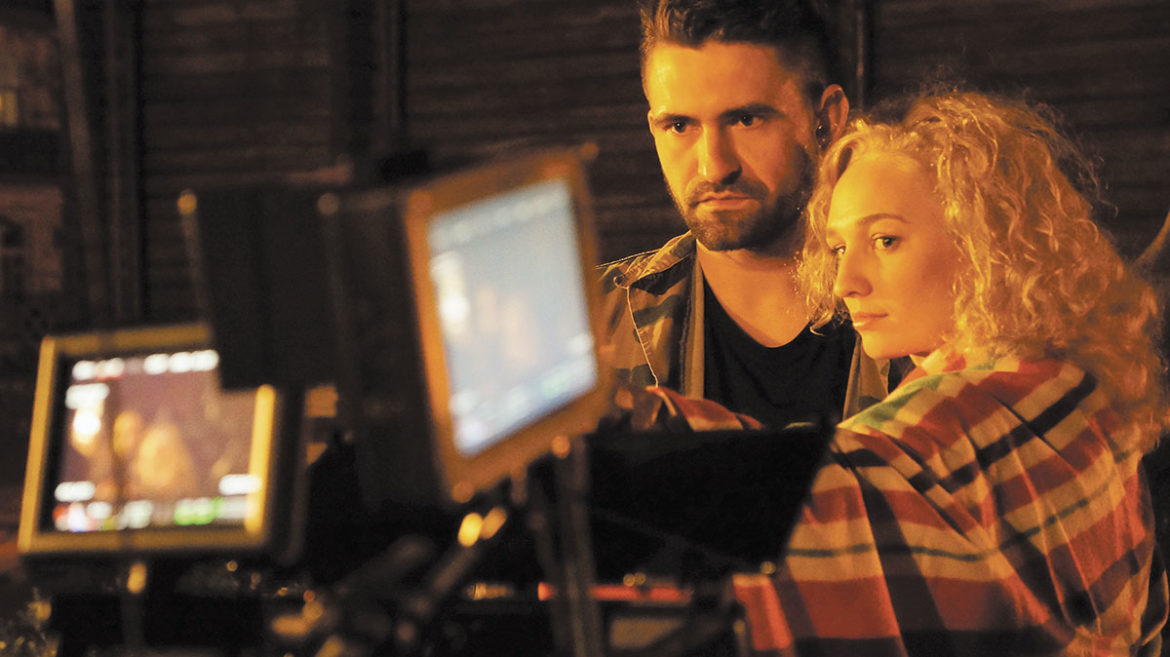 Dima Yaroshenko and Polina Snisarenko, the stars of “Julia Blue.”

The shoot began on September 15, 2015, and was completed six weeks later. A crew of 35 was employed with Mr. Roshchyn as the cinematographer. Ten days of shooting were done on the streets of Kyiv, after which the company moved to the idyllic village of Pidhorodtsi at the base of the Carpathian Mountains, employing dozens of villagers as extras. Working in Ukraine as an American director with U.S. production skills proved to be quite challenging as Ms. Toporowych attempted to integrate the different styles and skills in movie-making of a very different culture.

Ms. Toporowych explains that the recurrent theme of “Julia Blue” is the plight of Ukraine’s youth striving to find their identities while their country is at war. The characters of Julia and English represent opposite sides of what is happening in their country. Julia is from western Ukraine and a student of photojournalism. She is inspired by the protests and revolution in Kyiv and believes that by studying abroad and obtaining a higher education, she can help her country. English is a Russian-speaking Ukrainian from the east. He is wounded in the war. He believes in staying and physically fighting for his country.

Julia is “light,” a spirited young student planning her future, and English is “dark,” a warrior wounded both physically and psychologically. This distinction reflects reality, as many Ukrainians from both sides of Ukraine are fighting this war but share the same Ukrainian identity. English arrives in Julia’s life unexpectedly when she’s wrestling with her own uncertainties and making decisions about her future. Her path suddenly becomes more complicated. The ongoing presence of the war is felt throughout the film. More importantly, the film captures how young people are forced to live and endure war as they mature, struggling with changes associated with conflict, revolution, love and the pursuit of their ambitions. 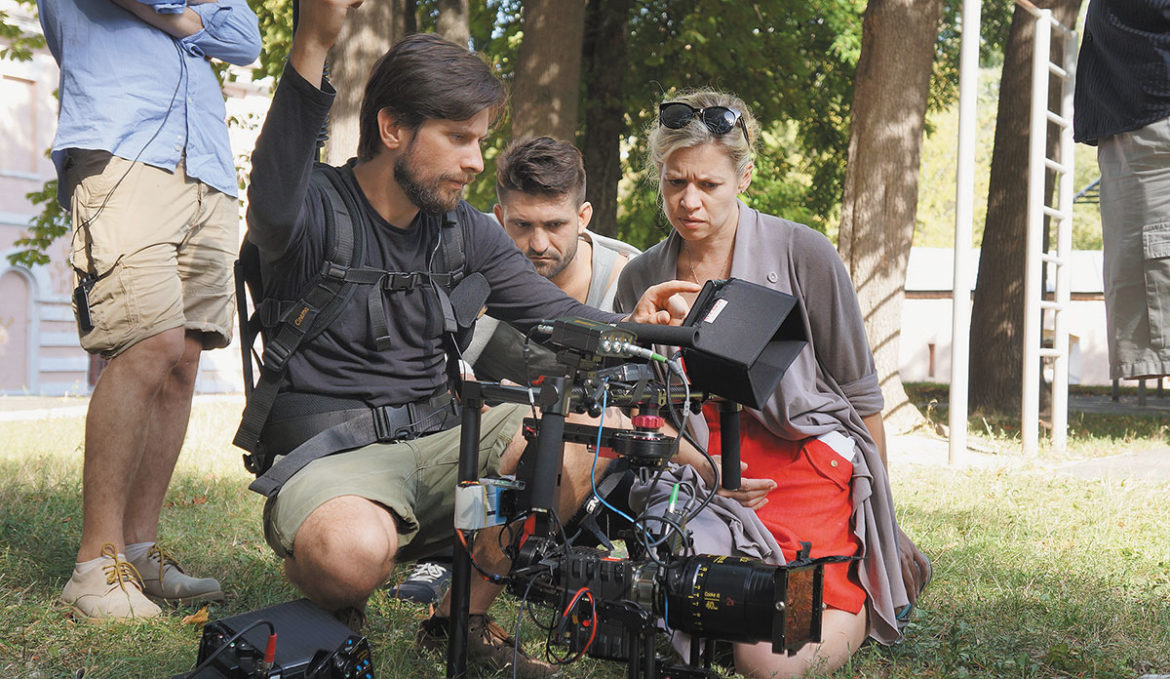 After the script of “Julia Blue” was written, every scene had to be translated to English, since it was primarily shot in the Ukrainian language. Ms. Toporowych solicited the help of Ali Kinsella from Columbia University for the arduous task of subtitling the entire film. She also chose Ben Kim, with whom she worked with at the Tribeca Film Festival, as her editor. The entire score of “Julia Blue” was composed by Alex Brown Church, with “Julia Blue” being his first film.

In May 2016, “Julia Blue,” was selected as part of the prestigious Independent Filmmaker Project (IFP) Lab. The IFP lab fosters the development, production and promotion of thousands of international projects in film, media and beyond. Every year, only 10 narrative feature films and their teams from across the U.S. are selected to become IFP Lab Fellows. To qualify, the film must be in post-production and directed by a first-time feature filmmaker. In September, a scene from “Julia Blue,” together with the nine other winners, was presented at Brooklyn Bridge Park on a 40-foot screen with the Brooklyn Bridge and Manhattan as the backdrop.

As an alumna of IFP’s Lab, Ms. Toporo­wych qualified for the Calvin Klein Spotlight on Women Filmmakers “Live the Dream Grant for Emerging Female Director.” IFP and Calvin Klein nominated the young filmmaker for the award. On November 28, 2016, at the Gotham Awards ceremony in New York City, Ms. Toporowych was honored for “Julia Blue” and won the $25,000 grant, which was presented to her by actress Margot Robbie.

After completion, “Julia Blue” was ready to hit the film festival circuit, where it won numerous awards. At the Woodstock Film Festival, Ms. Toporowych won her first Best Director award.

Film critic Thelma Adams had the following to say: “First, we award a prize for Best Director to a promising new voice in cinema. The sophistication of her craft in every way is remarkable for a first film. Her film humanizes a world-historical event by dwelling not on the movers and shakers of history, but rather on how world events invade and shape the life of one remarkable young woman, while bringing awareness to the war in Ukraine.” 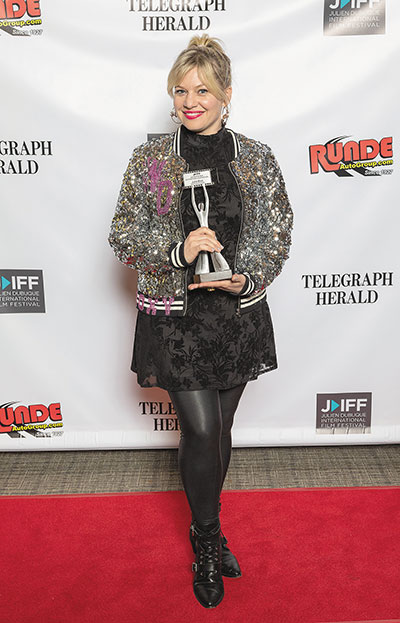 Spanning six years from her initial meeting with Mr. Roshchyn, Ms. Toporowych’s vision of how she could help her ancestral country came to fruition. She gave to Ukraine, as she did to us, her special gift of “Julia Blue.”

On March 8 of this year, the official trailer for “Julia Blue” was released and is available on YouTube or at the film’s website: https://juliabluethemovie.com. As of May 4, “Julia Blue” is streaming on Amazon Prime Video. To help support the film for other distribution outlets and other countries, please consider purchasing a copy and spreading the word.