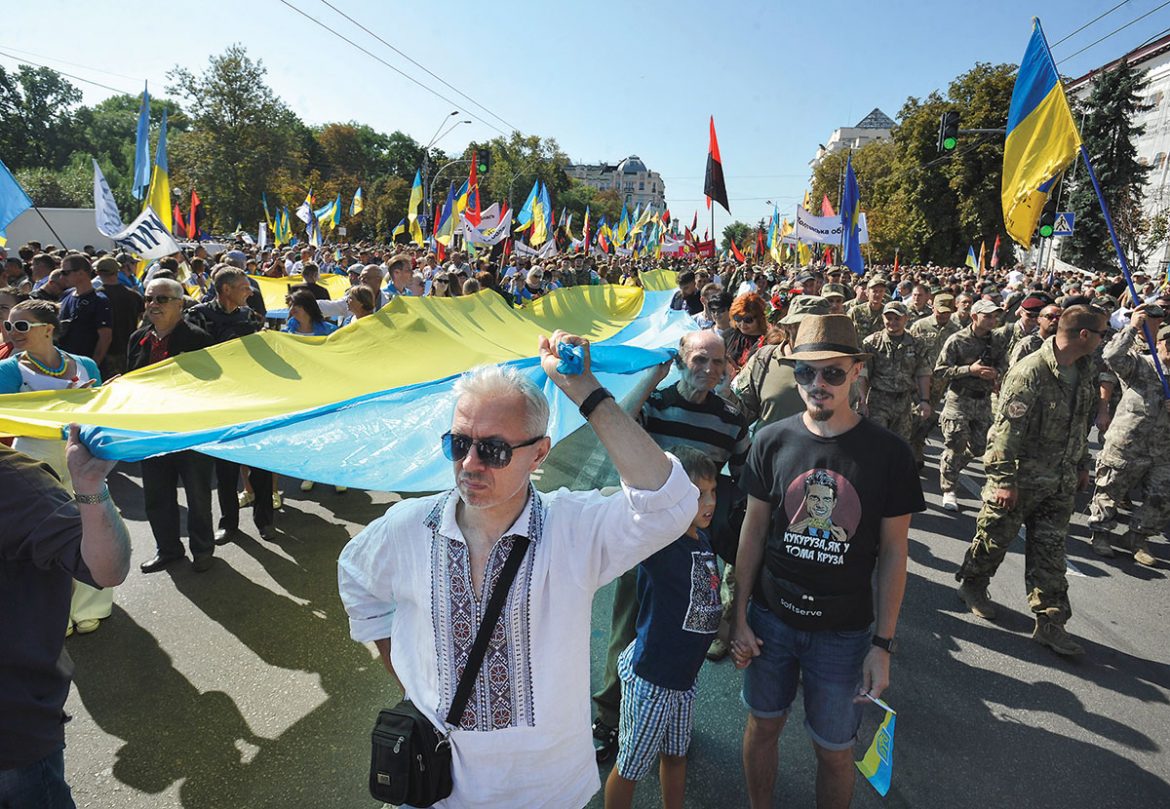 A long blue-and-yellow banner is paraded during the March of the Defenders of Ukraine.

KYIV – On August 24 Ukraine celebrated the 28th Independence Day anniversary and although festivities were held all around the country, attention was focused on the capital to see how the country’s new president, Volodymyr Zelenskyy, would impose his new style on proceedings, and what the reaction would be.

There were indeed plenty of surprises and innovations in what turned out to be a colorful yet poignant symbiosis of the new and the old.  And the occasion was not without controversy, or wonder, either.

On July 9, shortly after winning the presidential election, Mr. Zelenskyy declared: “Usually, on August 24, on Independence Day, we have a military parade. It’s pompous and definitely not cheap. It seems to me that this year, instead of holding a parade, it is better to give this money to our heroes….” He explained that instead of holding a costly parade, the state would allocate 300 million hrv (nearly $12 million) for bonuses to military servicemen,” and propose a surprise new form of celebration.

The president’s decision immediately generated controversy. His political opponents accused him of disrespecting the military and war veterans and undermining national pride. They insisted that they would go ahead and organize a march of veterans, their family members and supporters.

A compromise was worked out. On July 30, the Head of the President’s Office Andriy Bohdan announced that the traditional parade would be replaced by a March of Dignity. A separate procession, to be called the March of the Defenders of Ukraine, would also be held by Ukrainian war veterans. Later, as the details of the celebrations were finalized, it was made clear that participants could carry patriotic banners and other symbols, but should refrain from displaying purely political ones.

The official spectacle was arranged by famous music video director Alan Badoyev and stage director Olena Kolyadenko. It was broadcast live around the country and looked and sounded very different from what has been seen before. The latest filming and video techniques, including with the help of drones, were employed.

The imaginative scenario interwove the obligatory official elements with unexpected new components. Some of Ukraine’s best-known stars and cultural icons were featured against the background of the official proceedings and Kyiv’s iconic landmarks, and in the presence of representatives of the armed forces, officialdom and the diplomatic corps.

“We refused the idea of costly massive decorations and special constructions on Maidan, placing the accent on real people – their actions, stories and fates, which all the country should know of,” Ms. Kolyadenko explained.

The ceremony began on the famed Institutska street where the president and his wife, in the presence of scores of children clad in white, paid tribute to the Heavenly Hundred, the heroes of the Maidan who were shot down by snipers at that site in the last stages of the Revolution of Dignity, in February 2014.

“We must remember our heroes, those who gave their lives for the better future of our country. Our children are the symbol of our future. And this is why they will be important characters in the ceremony,” Mr. Badoyev told the media on the eve of the anniversary.

The president greeted the representatives of the armed forces on the Maidan, delivered his speech to the nation from there, and proceeded to award medals for bravery and distinguished service. The music and entertainment adapted to the occasion was provided by a host of well-known artists, cultural figures and ensembles, including the famed Veryovka choir, Ukraine’s leading composer Myroslav Skoryk, the electro-folk music band Onuka, singer Tina Carol, and even a rapper.

While all this was going, Mr Zelenskyy himself looked visibly moved and sang the national anthem along with those around him with evident pride and evoking a strong sense of occasion. His predecessor, Mr. Poroshenko, was conspicuously absent.

In his first Independence Day address, President Zelenskyy reflected on Ukraine’s epic state-building journey in the 10th century A.D. and called on fellow Ukrainians “not to quarrel over the past, but to unite for the future.” His speech was powerful, emotive, patriotic and human all at the same time.

He placed the emphasis on unity and inclusiveness at a time of war and major domestic challenges facing the country. This was one of the hallmarks of his speech, as was the pitch towards the younger generations.

“Today” he declared, “an entire generation, born in independent Ukraine, has already formed. For them, this is a normal state of affairs. It can’t be different for them.” He concluded: “That’s wonderful. Because this generation is our mental foothold. Foothold for freedom, democracy and development. They think differently, they think in a modern way, which means that Ukraine will only move forward.”

The president stressed that: “Independence did not appear by magic. The active struggle for it began over 100 years ago,” he said alluding to the declaration of independence made by the Ukrainian Central Rada on January 22, 1918.

One of the authors of Ukraine’s declaration of independence 28 years ago, writer and parliamentary deputy Volodymyr Yavorivsky, explained to the Ukrainian Weekly that he and his colleagues initially wanted to emphasize that they were “renewing” not inaugurating Ukraine’s independence. But fierce resistance from deputies belonging to the Communist Party opposed this, resulting in the compromise formulation.

President Zelenskyy went on to note that the struggle “lasted in times of the Soviet Union,” and referred to “Mykola Rudenko, Vasyl Stus, Petro Grigorenko, Vyacheslav Chornovil, Levko Lukianenko, participants of the Revolution on Granite.” Despite the hurdles, independence was inevitable, he argued, “because, as Levko Lukianenko said, the desire for independence is embedded in our genetic code.”

Mr Zelenskyy stressed again the need for unity. “Fellow Ukrainians! We are different. But we are united,” he continued. “We must be united, because only then are we strong.”  And here he inserted his main message: “We should understand that we have to count only on ourselves. Not to quarrel over the past, but to unite for the future. Ukrainian-speaking and Russian-speaking, regardless of age, gender, religion – we must be one people. Not on posters, not on slogans, but here. In everyone’s heart. We must move forward, build the country together, do the impossible together.”

President Zelenskyy addressed the concerns raised by his critics and sought to placate them.  He announced that August 29 would henceforth be observed as a Remembrance Day of Ukraine’s Defenders. “Today, families of deceased servicemen and members of volunteer units have come here. In order to commemorate those fallen, I have signed a decree establishing Remembrance Day of Ukraine’s Defenders who died in the struggle for the independence, sovereignty and territorial integrity of Ukraine,” he elaborated.

The “unofficial” march though the center of Kyiv of the Defenders of Ukraine followed the official celebrations. Thousands of war veterans, relatives of the fallen, and their friends, sympathizers, clergy and chaplains from various regions of the country proudly moved as planned from the Taras Shevchenko University through the capital’s main streets via the Khreshchatyk to the Maidan.  Many of them carried blue and yellow and military flags, portraits of fallen heroes, and banners identifying their places of origin.

The event was very impressive and moving in its own right, well organized, and passed off peacefully. In fact, it harmoniously complemented the official part of the celebrations.

Consequently, pride, hope, doubts, innovation, tradition and contention were all in evidence during this year’s Independence Day celebrations in Kyiv. But in the final analysis, the various events, both official and unofficial, all played their part in making it a memorable day in which the sense of unity and common purpose ultimately overcame political differences carried over from the recent bitter presidential and parliamentary elections.