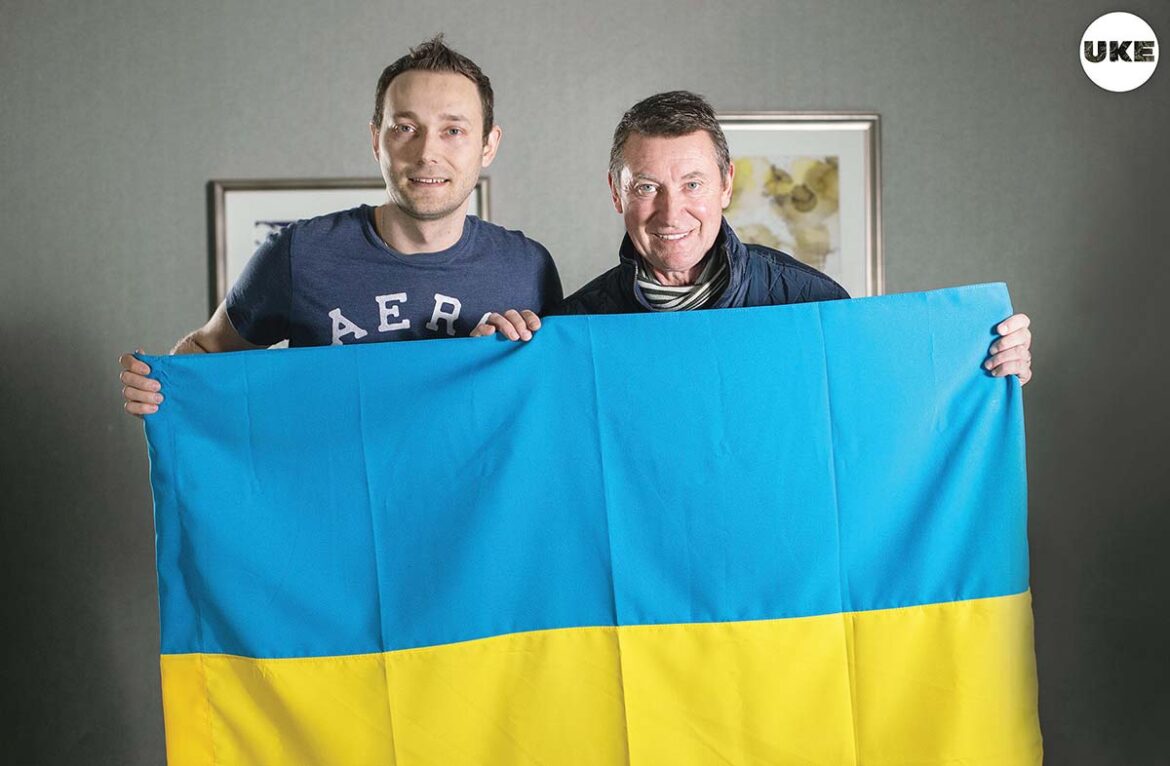 “Uke” director and producer Volodymyr Mula (left) holds a Ukrainian flag together with hockey legend Wayne Gretzky, also known as the Great One, because he is still considered by many to be the best hockey player to have ever played the sport.

CHICAGO – A groundbreaking documentary film has been completed that chronicles the contribution that professional hockey players of Ukrainian heritage in North America made toward the development of the sport and the National Hockey League’s (NHL) nearly 103-year-old existence. 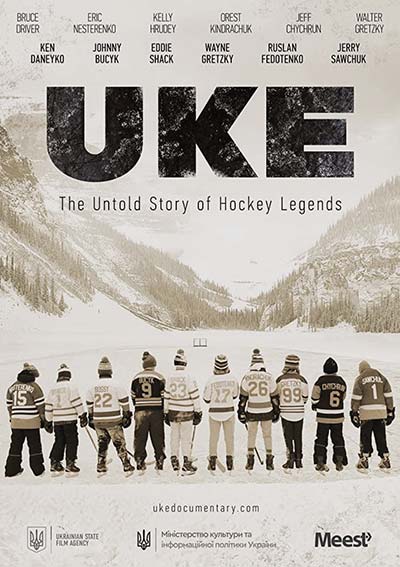 The cover of “Uke,” a documentary about Ukrainians players in the National Hockey League and their contribution to the sport’s and league’s development in North America by Kyiv-based director and producer Viktor Mula.

Its director and producer, Volodymyr Mula in Kyiv, spent more than two and a half years on the project interviewing such legends as four-time Stanley Cup winner Wayne Gretzky (Edmonton Oilers, 1984, 1985, 1987, 1988), Eric Nesterenko (Chicago Blackhawks), who won the league’s top honor in 1961 and two-time cup winner Ruslan Fedotenko (Tampa Bay Lightning and Pittsburgh Penguins) in 2004 and 2009, respectively.

While conducting research during production, the 30-year-old director discovered that more than 50 players of Ukrainian extraction won the Stanley Cup, the first one being Jack Leswick with the Blackhawks in 1934.

Titled “Uke,” a moniker that Canadians gave to Ukrainian immigrants, calling them “Ukie” as well, the 90-minute film has a budget of $225,000, more than three-quarters of which was provided by the Ukrainian government and $10,000 of which was donated by Ukrainian communities in North America. (To view the trailer, go to https://www.youtube.com/watch?v=7xTg8NS4nkA.)

“My goal was to show the contribution the Ukrainian players made to the development of hockey in North America since the ‘Original Six’ teams established the NHL [in 1917],” Mr. Mula told The Ukrainian Weekly. “I want audiences to hear from the protagonists what it means to win a Stanley Cup… and the fact they’re Ukrainians – nobody in the world knows about it.”

Another goal was to demonstrate to the players that the Ukrainian “traditions of 100 years ago when their grandparents or parents arrived in North America are not lost and still have significance,” he said.

Most of these Stanley Cup winners were born in Canada or Ukraine. Only Joe Motzko, who won the cup with the Anaheim Ducks in 2007, was born in the U.S. However, about a dozen of them moved to the U.S. after retiring from the sport. 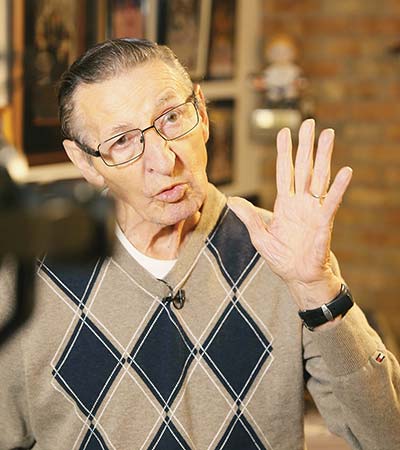 Known as the patriarch of Canada’s most famous hockey family, Walter Gretzky, speaks on camera, including about how he taught his son Wayne to play the sport.

According to the director, Gretzky spoke about his Ukrainian roots and about how the game of hockey evolved during his illustrious 21-season career. His finesse and exceptional speed revolutionized the game and he felt bad about breaking Gordie Howe’s points record (1,850) because he was his childhood hero. He added that Howe told Gretzky it was an honor that he was the one to have broken his long-standing record. Gretzky broke it on March 23, 1994, playing for the Los Angeles Kings.

Mr. Mula also interviewed Gretzky’s father, Walter Gretzky, who spoke about learning Ukrainian first while growing up because his mother was from the current-day Ternopil region and his father was an ethnic Ukrainian having lived near modern-day Brest in Belarus.

“I learned Ukrainian first because my mother didn’t know how to speak English until later when the kids grew up. So Ukraine is the motherland of our family,” Walter Gretzky says in the documentary.

“They called my dad ‘Uke’ all the time. That just stuck on him and everywhere he went it was ‘Ukie,’ ‘Uke’ because of his Ukrainian heritage,” says Jerry Sawchuk whose father, Terry Sawchuk, won the Stanley in 1952, 1954 and 1955 with the Detroit Red Wings, and in 1967 while playing for the Toronto Maple Leafs.

He has submitted the film to the jury of the Toronto International Film Festival for its premiere and expects to receive a response in August for an eventual screening the following month. The festival’s organizers still haven’t finalized the parameters of how movies will be shown in terms of theater capacity while offering online screenings during an ongoing coronavirus pandemic.

A response to The Weekly by the NHL acknowledged that the budding director – “Uke” is his third documentary – licensed footage from the league for use in the film.

Its completion and anticipated premiere also coincide with the NHL’s plans to reopen the season amid the pandemic with two hub cities, Toronto and Edmonton, hosting three games a day.

The National Hockey League Players’ Association (NHLPA) and NHL announced on July 6 that they reached a tentative agreement to start formal training camps on July 13 and start a qualifying round of play by August 1. 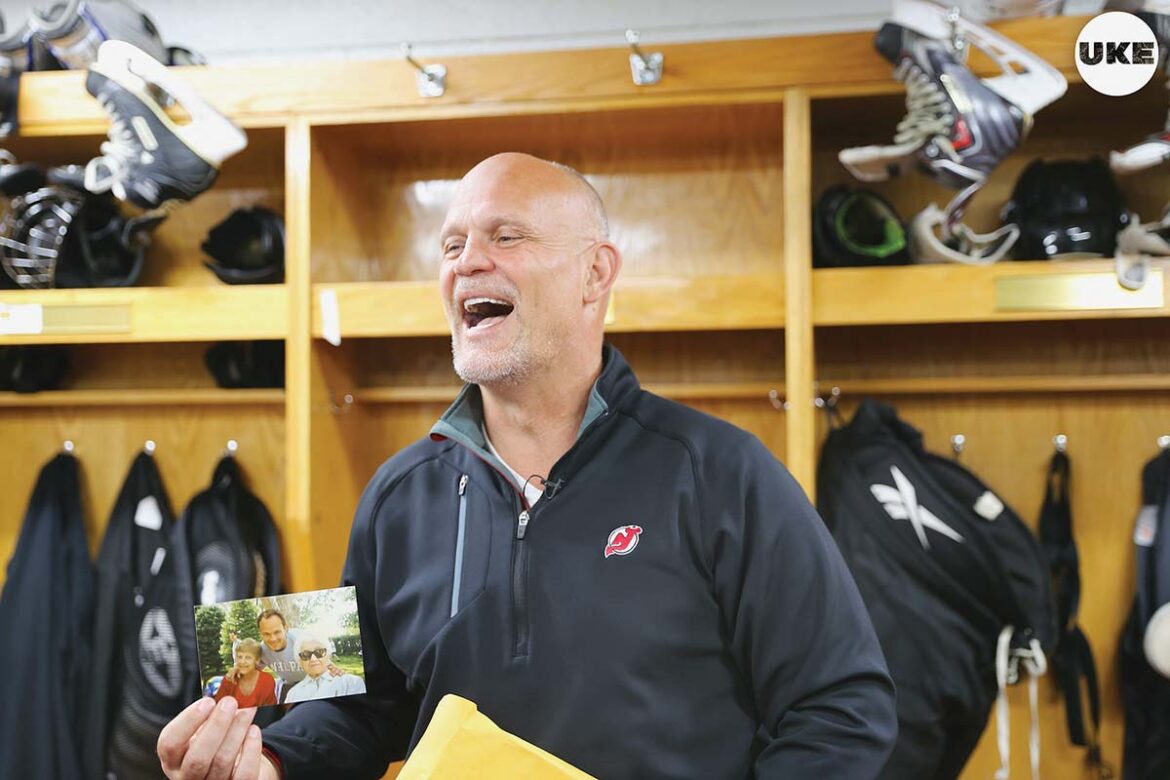 Ken Daneyko, who won three Stanley Cups while playing all 20 of his professional seasons with the New Jersey Devils, laughs in a hockey dressing room in a behind-the-scenes snapshot.

Mr. Mula’s Teleprostir Studio hopes to distribute the film in Ukraine starting in autumn depending on what guidelines are in place amid the pandemic, which has killed nearly 546,000 people worldwide, according to John Hopkins University in Maryland. 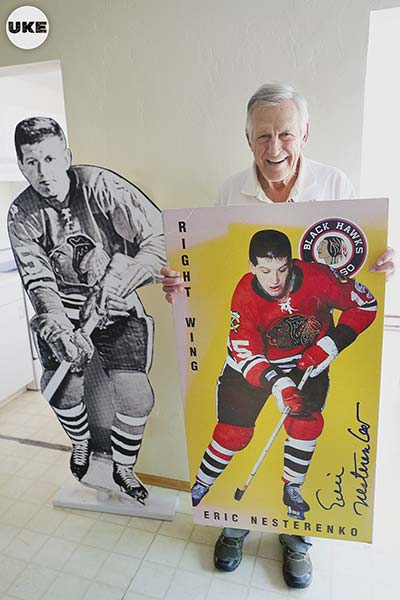 Ukrainian Canadian Eric Nesterenko proudly holds a placard from his playing days with the Chicago Blackhawks with whom he won the Stanley Cup in 1961.

In addition to Toronto, the director has plans to submit the film to Edmonton’s and Calgary’s respective film festivals and the Texan capital of Austin as he searches for a North American distributor.

A key takeaway, Mr. Mula said, were some of the parallels the players drew between when their relatives emigrated to North America and the aggression Ukraine today faces from Russia.

In the film, Nesterenko speaks of his father, a native of the Chernihiv region, fighting the Bolsheviks in 1919 on the Ukrainian side before emigrating to Canada.

“He [Nesterenko] said he currently sees what’s happening in Ukraine now and made comparisons when his father left the country,” Mr. Mula pointed out, referring to Russia’s illegal annexation of Ukraine’s Crimean peninsula six years ago and the current occupation of certain territories in Ukraine’s Luhansk and Donetsk regions.