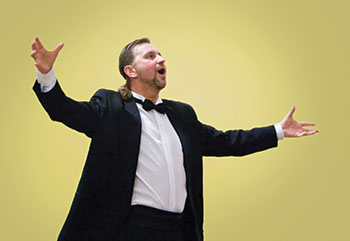 TORONTO – The Kyiv Chamber Choir concert on Sunday, October 30, in Toronto’s Koerner Hall was described by Conductor Mykola Hobdych as “something that happens maybe once or twice in the lifetime of any choir or conductor. In our case, the last time was in Carnegie Hall in 1996.”

This superb concert hall was virtually sold out. The choir and producers Platinum Concerts International were welcomed by the president of Canada’s Royal Conservatory of Music, which co-presented the Toronto concert. The choir performed both sacred and folk music from Ukraine with skill and passion. The choir’s performance elicited a standing ovation that went on for over seven minutes.

Two days earlier, the  award-winning choir had performed this repertoire in Chicago – their first-ever concert in that city – and their “Sounds of Ukraine” concert also drew a lengthy standing ovation.

Executive Producer Andrew Witer said “I think Mykola Hobdych and his choir are presenting the very best in Ukrainian choral music. Ukrainians are loving it. But so are the other people who come to these concerts because they know that Ukrainian music, as performed by this superb Choir, is great choral music.”

Mr. Witer said the Kyiv Chamber Choir’s performances “appeal to anyone who loves good music,” and noted that “Recognition by the broader music community helps the choir achieve one of its goals – ensuring that great Ukrainian music will never be banned or ignored again.”

The first half of the choir’s concert features sacred music by some of Ukraine’s greatest composers. This music was written in the middle ages, through the Baroque, Classical and Romantic eras and up to today.  It includes selections by Dyletsky, Bortniansky, Stetsenko and Sylvestrov, among others.

“Most Ukrainians have heard the music of these master composers – but never sung with such unforgettable skill and passion,”  says Choir Tour Coordinator Oksana Komarnicky.

The second half of the choir’s concert features melodic folk songs, drawn from over 1,000 years of music history – arranged by talented Ukrainian choral composers.  Havrylets, Bida, Nebesny and Zubytsky are among the composers whose works are featured in the choir’s concert.

The folk songs are not just sung – they are presented as “chapters” in a continuous story.

This concert is to be performed in New York, Washington, Philadelphia, Boston, Hartford and Rochester, from November 1 to November 6, before this world-renowned choir returns to Kyiv.