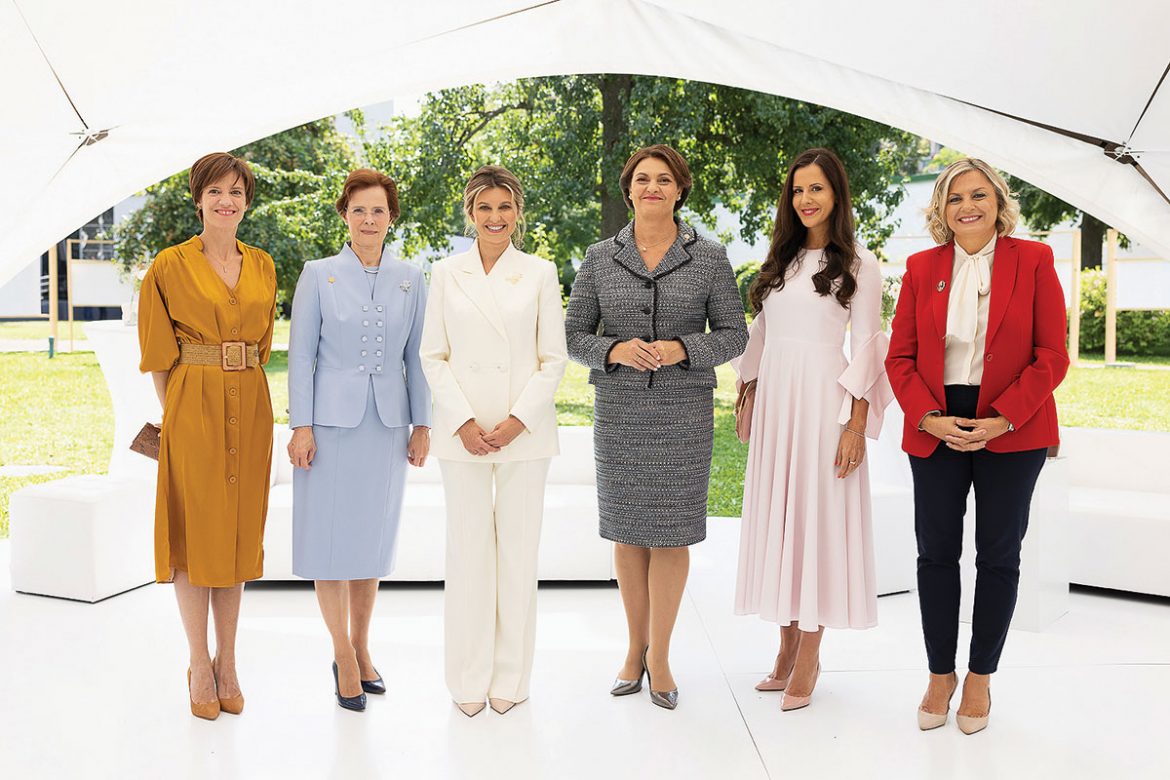 KYIV – At the initiation of Ukraine’s first lady, Olena Zelenska, the wives and husbands of the leaders of several countries met in Ukraine on August 23 to discuss “soft power and the new reality.”

The summit, which took place on the eve of the 30th anniversary of Ukraine’s renewed independence, concluded with a joint declaration on international cooperation and assistance in an effort to resolve pressing humanitarian issues and achieve the United Nation’s Sustainable Development Goals.

According to Ukraine’s Ministry of Foreign Affairs, the summit is a new format designed to promote international communication between the first ladies and gentlemen of various countries. It is meant to create an international platform whereby participants can share experiences and implement joint projects for the well-being of the citizens of their respective countries.

The key issue of this year’s summit is the adaptation of the world to humanitarian challenges caused by the COVID-19 pandemic.

The summit, which took place on August 23 in the complex of St. Sophia Cathedral, was held in a hybrid format, as some participants attended in person, while others joined the forum online as a result of ongoing COVID-19 pandemic restrictions.

“The pandemic has changed the global rules of the game. Different countries face the same challenges in education, healthcare and in ensuring equal rights in the new reality,” Olena Zelenska, the wife of Ukrainian President Volodymyr Zelenskyy, said during her speech that kicked off the inaugural event. 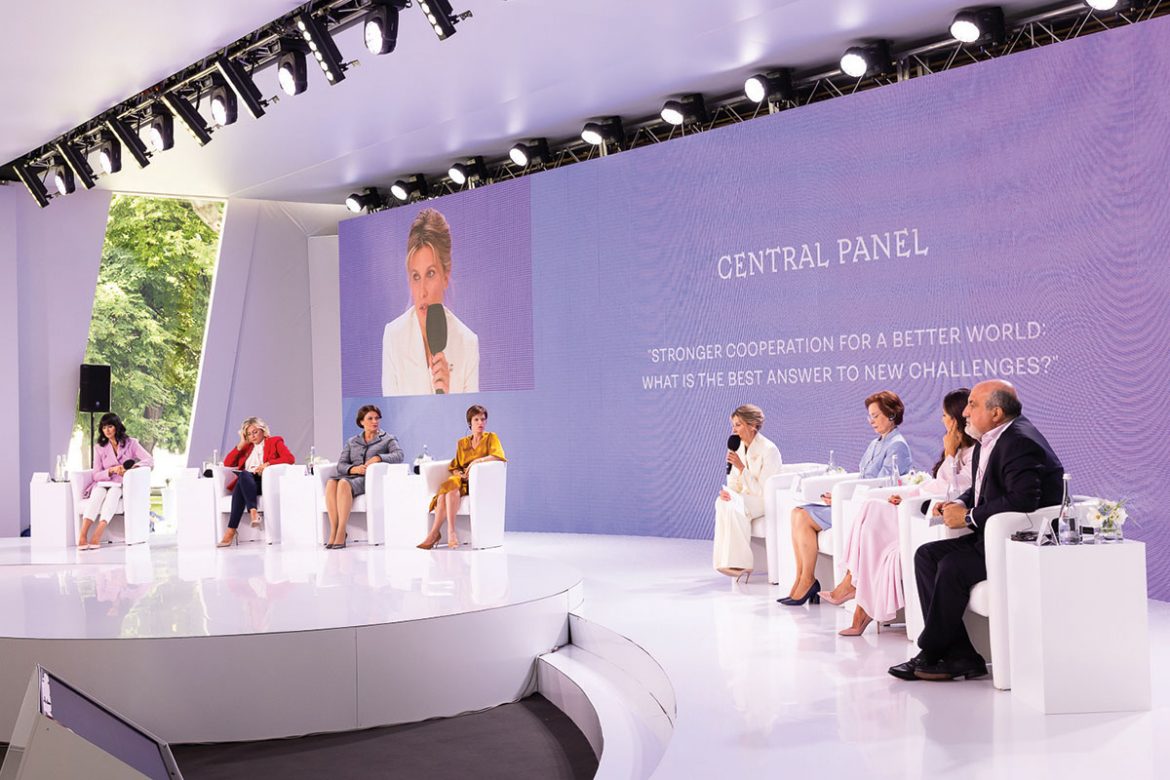 Olena Zelenska (center, holding microphone), the first lady of Ukraine, speaks during a panel at the inaugural summit of first ladies and gentlemen in Kyiv on August 23.

“It is more effective to overcome them by joint efforts. That is why Ukraine initiated this summit to unite the efforts of the first ladies and gentlemen around the world and create an effective international platform not only for the exchange of experience but also for the implementation of joint projects for the well-being of people.”

Ms. Zelenska emphasized that the summit is a completely apolitical event, and participants want to avoid political issues. She said that the event is solely a humanitarian forum, and their goal is to form a non-political union, one of the few in the world.

“First ladies and gentlemen have no political power, but they can draw attention to humanitarian issues at the highest level. So far, there has been no international platform on which we can communicate regularly, sharing the experiences of our countries. By creating such a platform as the summit of first ladies and gentlemen, Ukraine is setting a new trend for the whole world,” Ms. Zelenska said.

Ukraine’s first lady said she plans to organize such summits annually, saying that it will allow participants to discuss and find solutions to the world’s most pressing problems.
Among the topics discussed during the event were equal access to quality healthcare, challenges of the new reality in education, equal opportunities for development and self-expression of all people without discrimination.

Several experts joined the discussion, as well as special guests, including former United States Secretary of State Hillary Rodham Clinton, who was the first lady of the United States in 1993-2001; American actress and eight-time Emmy nominee and Golden Globe winner Robin Wright, who is known for her role as the first lady of the United States in the TV series House of Cards; Lebanese-American essayist and author of the bestsellers “The Black Swan” and “Antifragile” Nassim Nicholas Taleb, as well as Afghan director and the first woman CEO of the company Afghanfilm Sahraa Karimi.

“We, first ladies and gentlemen, have a unique position that is sometimes accompanied by unmatched challenges,” Ms. Clinton said. “We live under a magnifying glass, and our life is subject to great scrutiny. This is not easy, as I know from personal experience. At the same time, we have an unprecedented opportunity to serve our country, use resources and relationships to undertake important projects, and contribute to the preservation of health and well-being of our society,” Ms. Clinton said.

Recalling her personal experience, the former first lady and secretary of state said it had been very useful to work in such areas as health care, promoting the rights of women and girls, providing all children with the opportunity to fulfill their potential. Communication with other first ladies and gentlemen was also inspiring and essential, she said. She also congratulated Ukrainians on the 30th anniversary of their renewed independence.

Ms. Wright spoke about helping women in the Congo, saying that the idea to protect their rights came to her after she visited the country in 2011.

“The Congo is probably the worst place for women in the world,” she said, adding that she went “from household to household, to senators, nearly to [former U.S. President Barack Obama” to help Congolese women. In this regard, she invited the summit participants to organize a union that would consolidate their influence to help the needy. 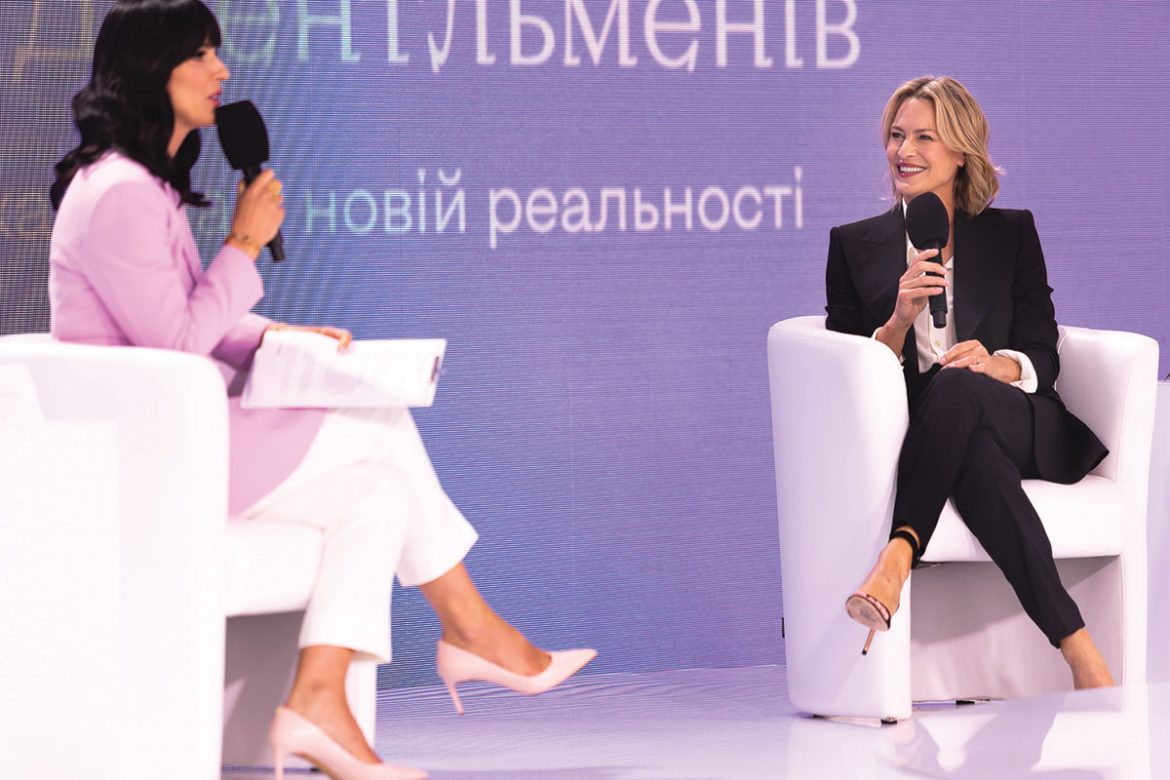 “Each of us has a little inspiration, power, authority and equal opportunities so that we can make the forum the beginning of a new partnership, a union,” Ms. Wright said.

According to the Ukrainian presidential office, the country will offer all participants of the summit an action plan meant to foster further cooperation.

“Soft power has received its first international document and will now be able to work continuously and more effectively in the long run,” Ms. Zelenska said at the conclusion of the event, referring to the name of the forum and the document that resulted from the summit.

Ms. Zelenska underscored that hundreds of thousands of women, children and families have lost their homes as a result of the armed aggression by Russian-backed troops in Ukraine, and she noted that they need help and support.

“Each and every one of us can and should become the voice of those who are deprived of the opportunity to be heard. Today, the social media initiative #WeCanSaveThem was launched, which calls on all concerned citizens to actively spread information about the situation of women, children and families in conflicts and ways to help them,” she said.