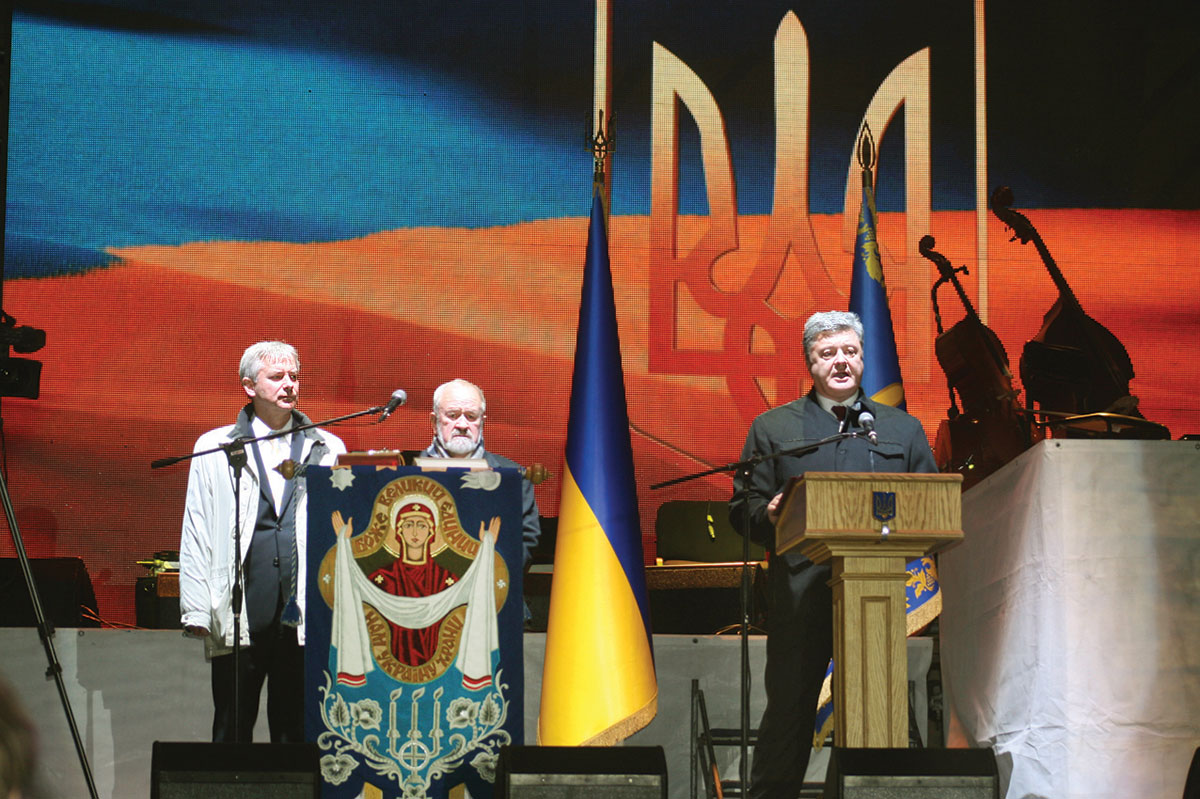 At the anniversary celebration (from left) are: Andriy Meleshevych, president of the National University of Kyiv-Mohyla Academy (NaUKMA); Vyacheslav Bryukhovetsky, honorary president of NaUKMA; and Petro Poroshenko, president of Ukraine. 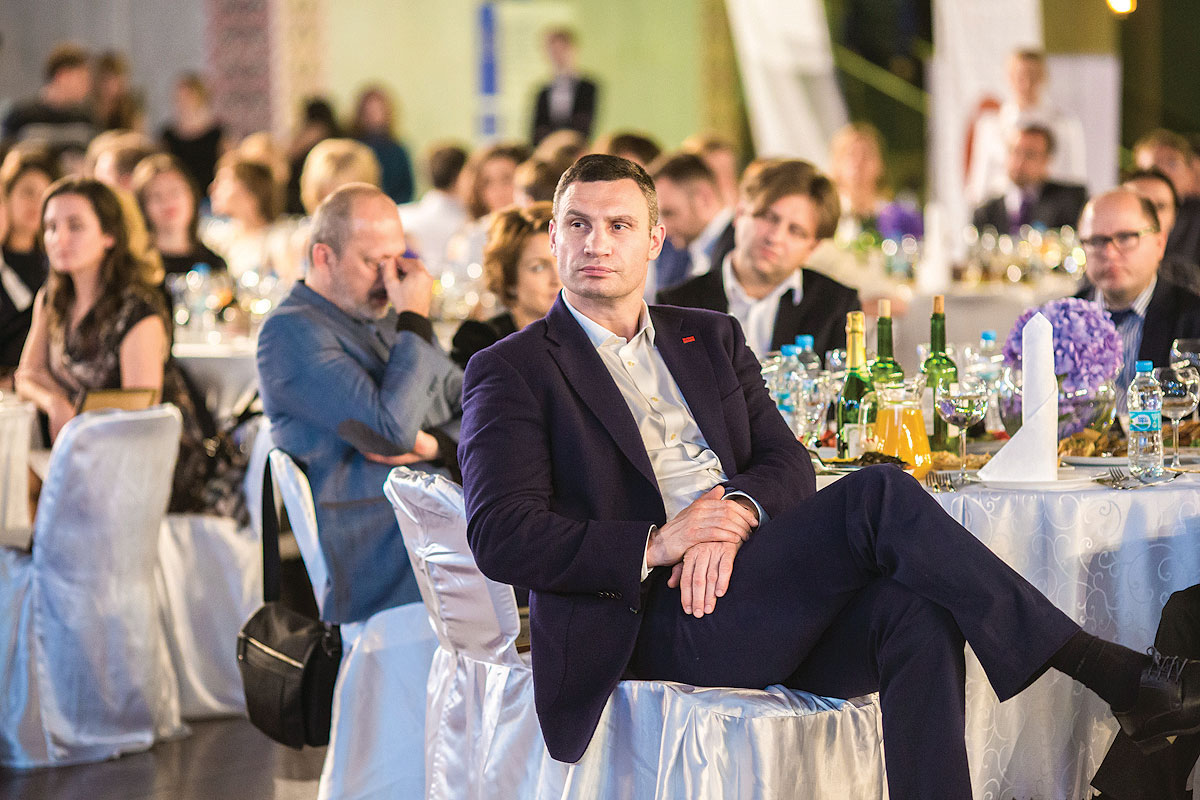 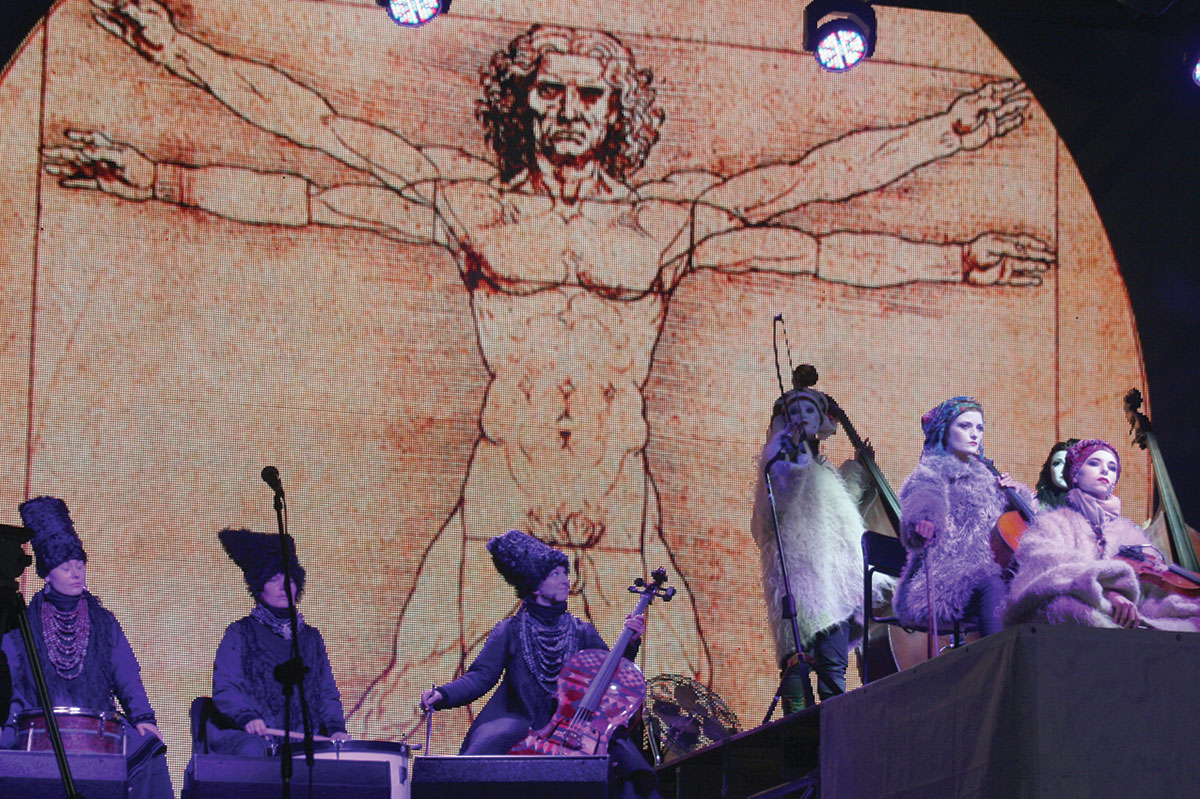 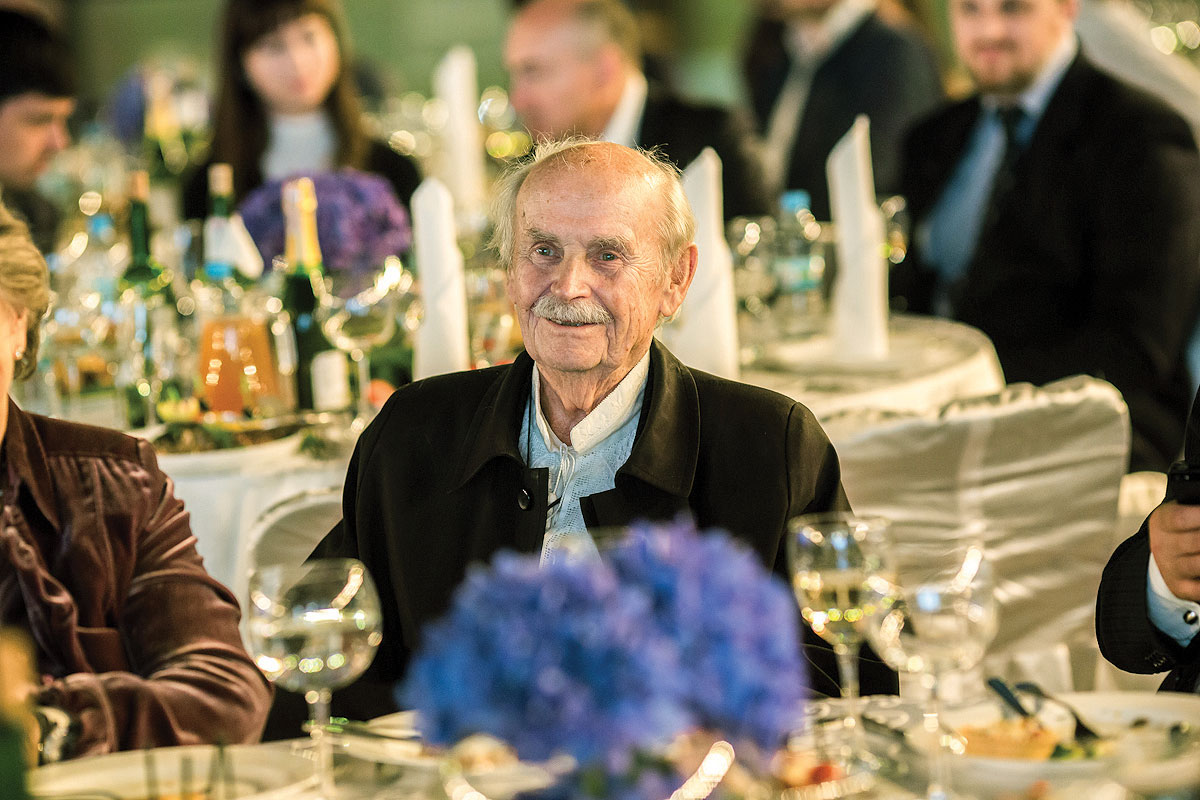 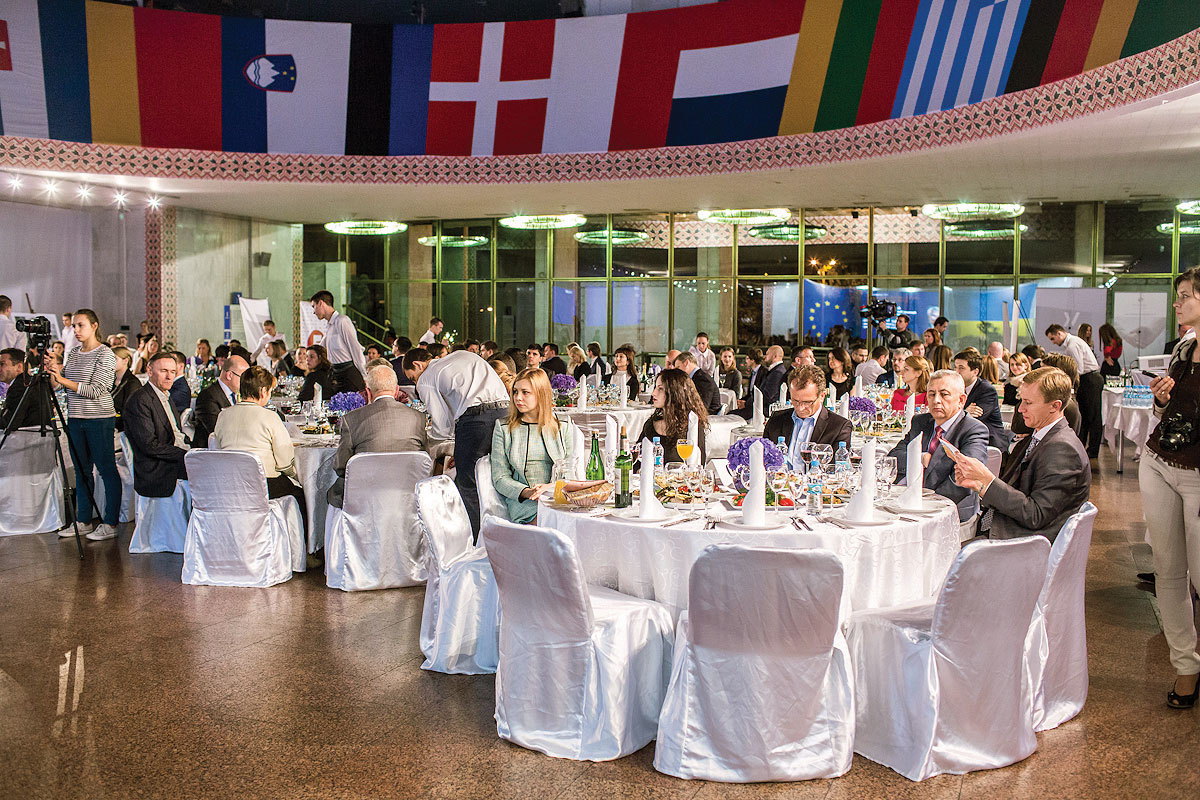 At the fund-raising reception at the Kyiv International Art and Conference Center. 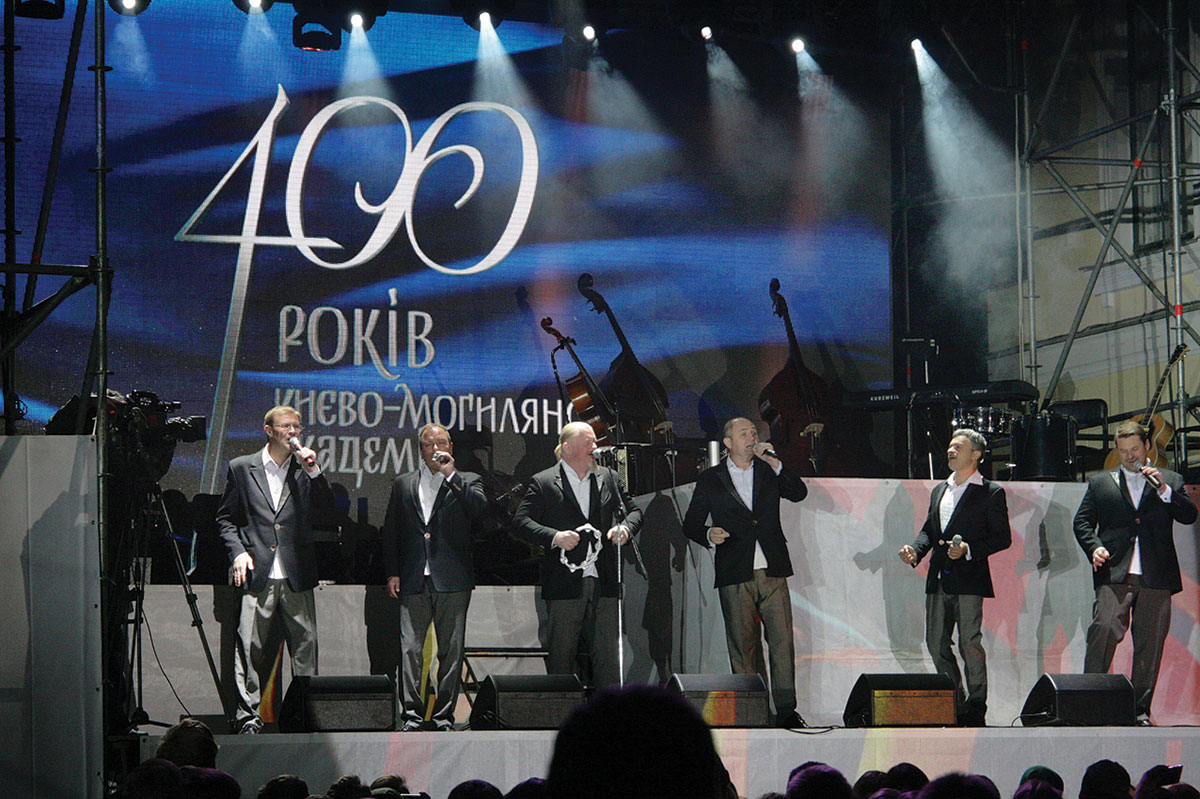 Pikkardiyska Tertsiya performs during the concert celebrating the 400th anniversary of Kyiv-Mohyla Academy. 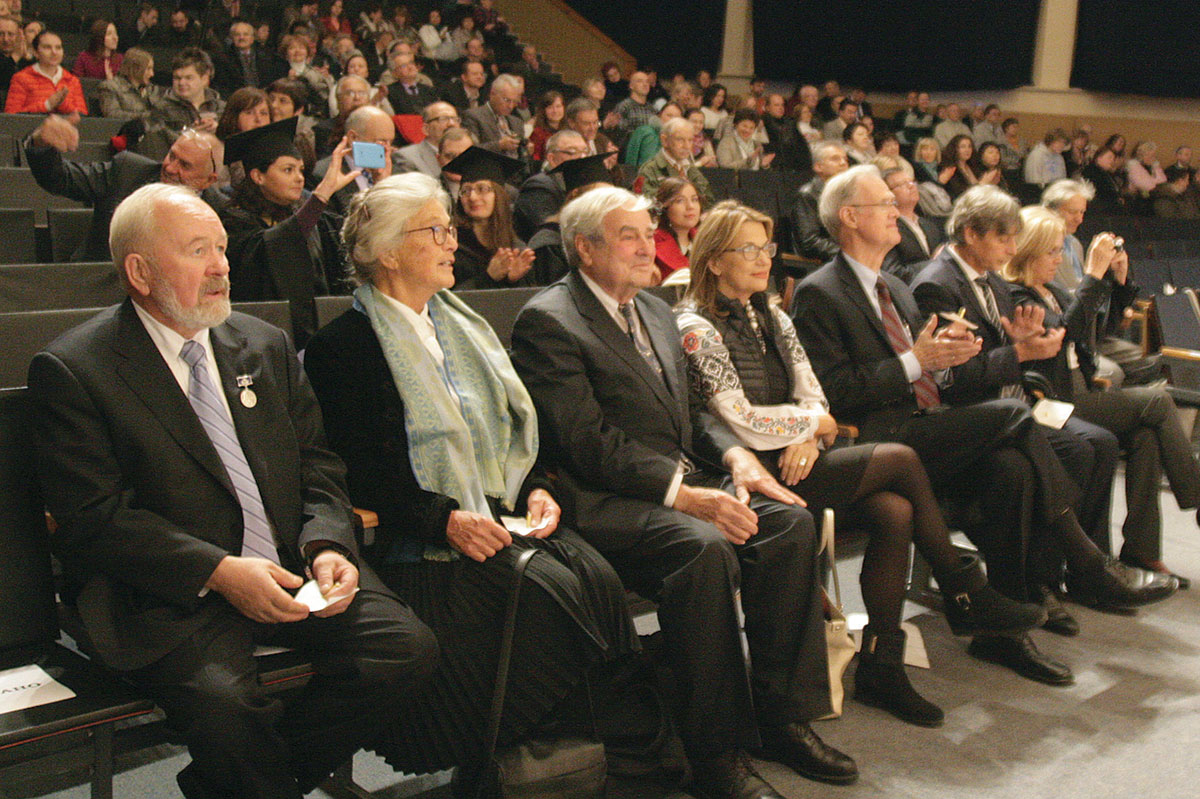 KYIV – The National University of Kyiv-Mohyla Academy celebrated its 400th anniversary in Kyiv with exhibits, concerts and conferences throughout the year, a fund-raising event on October 1 and a spectacular outdoor event on October 15.

A benefit reception and banquet under the theme “Freedom, Leadership and Innovation” was held on October 1 at the Kyiv International Art and Conference Center known as the Ukrainian Home. It was supported and attended by Kyiv Mayor Vitali Klitschko, ambassadors, diplomats, business and cultural leaders, alumni and friends.

Among the guests were Dr. Serhiy Kvit, minister of education and former president of the National University of Kyiv-Mohyla Academy (NaUKMA, as it is know by its Ukrainian acronym); many alumni who are now part of Ukraine’s government, including Gennady Zubko, vice prime minister, Rostyslav Pavlenko, deputy head of the presidential administration, and Oleksii Pavlenko, minister of agriculture; and others.

Volodymyr Lavrenchuk, deputy head of Raiffeisen Bank Aval, and many distinguished business executives, alumni, partners and friends of the university were in attendance.  Dr. Bohdan Hawrylyshyn, honorary professor of NaUKMA and renowned scholar, civic activist and philanthropist was featured as honorary speaker.

Mayor Klitschko spoke for many in attendance when he stated: “We came to support Kyiv-Mohyla Academy.  I have great respect for this university.  This is where many of my friends and colleagues received their education.  I consider it a privilege and a pleasure to help Kyiv-Mohyla Academy as much as I can.”

On October 12-14, approximately 50 researchers and academics from six countries gathered at NaUKMA for a scientific conference. The three-day conference focused on the philosophers, literary scholars, theologians and historians linked to the academy, and discussed issues related to Kyiv-Mohyla Academy’s history and its influence on the nation’s past.

The primary celebration was held outdoors on October 15 with thousands in attendance, including honored guests, ambassadors of various countries, ministers and members of Parliament, sponsors, longtime supporters, cultural and business leaders, faculty and students.

Almost 2,000 students and faculty members gathered in front of a grand stage, surrounded by bleachers that accommodated hundreds of special guests. Several hundred students and friends gathered at a separate campus area to watch the proceedings on large screens.

A special tribute and moment of silence was set aside to honor those who are defending Ukraine in the war in eastern Ukraine and those who participated in the Euro-Maidan, with a special mention of those members of the Kyiv-Mohyla family who have been injured or killed in the current war.

“The university played a pivotal role in Ukraine’s education and history. Today, the key to success in the world is innovation and human capital.  Right now, as never before, a country’s development and success depends on the competence and critical thinking of its pro-active and responsible people.  Such are the individuals that Kyiv-Mohyla Academy educates.

“A university’s success is measured by its graduates.  Your graduates are successful in business, your graduates are working in the Presidential Administration on my own team, your graduates are in charge of entire ministries, they are members of Ukraine’s Parliament, they introduce and pass laws that change our nation for a better future.”  To everyone’s applause, President Poroshenko stated that he supports an increase in funding for education and research.

A spectacular show featuring film, images and audio depicting the history of Ukraine and Kyiv-Mohyla Academy, and featuring scenes from the Euro-Maidan was projected onto the facades of the historic university buildings facing the audience.  This audio-visual presentation projected by high-power technology left a memorable image in the hearts and minds of everyone in the audience, and inspired a connection to Ukraine’s past and present. It was a spectacular way to relay Ukraine’s and the university’s history.

Especially moving was the unique and inventive performance by the Theater of the Dakh Center of Contemporary Art, directed and produced by the brilliant, expressive, innovative Vlad Troitsky.  When the group Dakha Brakha performed with the Dakh Sisters of the theater troupe, at times accompanying the visual lighting show and at times becoming its driving force, the effect was visually and emotionally jarring.  The sound effects combined with the visual presentation illustrated Ukraine’s history and the chaos of the last 25 years of struggles – from independence, to identity, to freedom.

The weird, haunting, magical sounds of the singers and actors penetrated the premises, the walls and the audience, producing a mood of reflection and mystery.  When these sounds combined with the piercing loud beating of drums, there was no doubt that the mystical energy surrounded the audience was a reminder of the brutality of the current war and its human cost. Yet, at the same time, it was a call for a reassessment of national and individual identity, and a sign of solidarity with the frailty of the human condition.

The drums accelerated to their strongest force when images of the snipers’ brutality on the Maidan were projected.  This was the moment when the audience felt the Maidan Revolution’s impact as a turning point in history that profoundly changed Ukrainians and the world, and that Kyiv-Mohyla Academy had played a significant role in this process.

An added artistic manifestation of the anniversary event was the performance of the well-known male vocal ensemble Pikkardiyska Tertsiya, which performed its most popular songs, as well as songs to honor those who give their lives in the current war for Ukraine’s freedom.  The university’s choir, Pochaina, provided a choral performance worthy of a full concert.  The university’s theater group entertained in the aisles during breaks.

Marta Farion is president of the Kyiv-Mohyla Foundation of America.