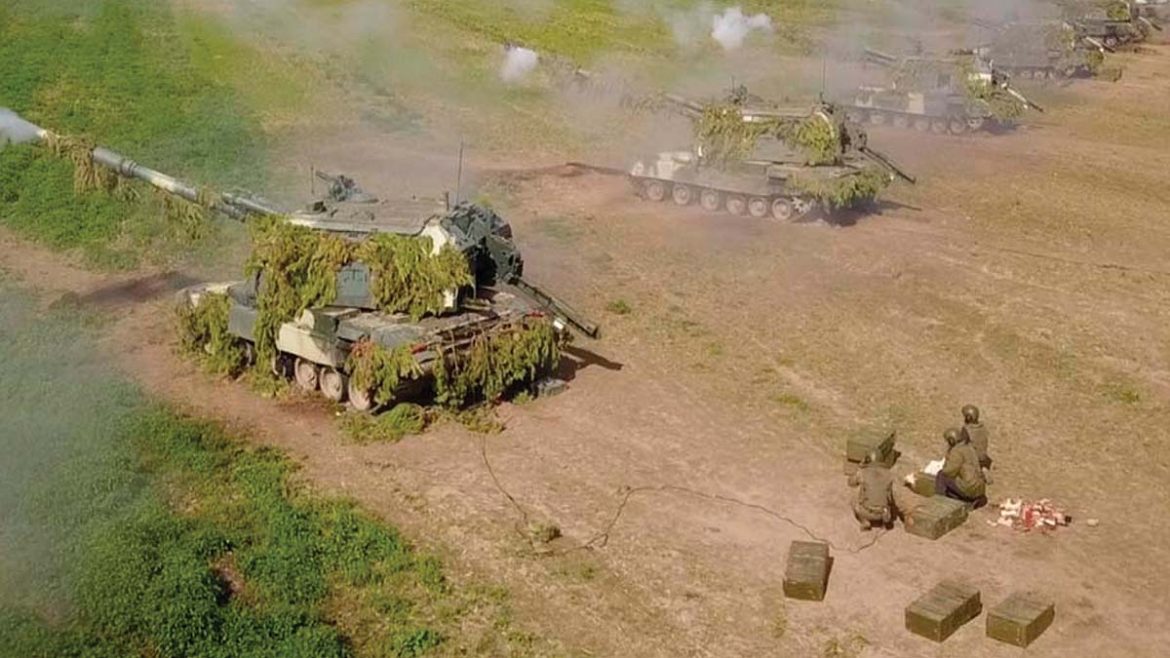 Tank gunners from Russia and Belarus jointly launch a massive fire strike in the Brest region of Belarus during the quadrennial Zapad-2021 military exercises.

Russia did not allow monitors from the NATO defense bloc to observe the exercises, a move that violated the Vienna Document, an international agreement that governs military exercises in Europe.

It was the biggest war game in decades. For comparison, NATO’s large-scale Trident Juncture 18 exercise, which took place in 2018, involved only 40,000 military personnel.

Belarus and Ukraine share a 1,200-kilometer border and Minsk reported that shots were fired at a border post on its territory from Ukraine on September 11 during the active phase of the Russia-led military drills that started the previous day.

In response, Ukraine’s Border Guard Ser­vice said it was investigating the incident.

The service’s press secretary, Andriy Demchenko, said that Belarus’s border guard service met with their Ukrainian counterparts to discuss the incident and that shots were most likely fired from a hunting rifle.

However, there is a canal that connects to a small lake which divides the border area. As a result, local Ukrainian media cast doubt on the Belarusian story, arguing that an individual firing a hunting rifle would likely not be able to hit their target across the body of water.

Mr. Demchenko added that the Belarusian side did not issue a formal note of protest about the incident.

Three days after the border shots, Ukraine’s main counterintelligence agency, the Security Service of Ukraine (SBU), reported finding a cache of weapons near the state border with Belarus in Rivne Oblast.

Relations between Kyiv and Minsk have gradually deteriorated since last year’s presidential election in Belarus in which dictator Alyaksandr Lukashenka claimed victory. Ukraine did not recognize the outcome of that election as legitimate because of widespread evidence of voter fraud.

Since ascending to the presidency in 1994, Mr. Lukashenka has cracked down on dissent and has led a despotic regime that has been sanctioned by Western powers. After the most recent presidential election, Kyiv also levied sanctions on Belarus. Among the punitive measures, Kyiv banned direct flights between the two countries.

The Belarusian self-proclaimed president has also falsely accused Kyiv of trying to destabilize the country and his rhetoric has grown in bellicosity. While speaking during the Zapad military drills, he announced plans to have Russia’s sophisticated S-400 air defense systems deployed along the Ukrainian border.

The announcement was in reference to a $1 billion arms package from Russia. Mr. Lukashenka spoke with Russian President Vladimir Putin about the matter in Moscow on September 9. It was their sixth meeting this year.

Over time, Mr. Lukashenka has veered toward forming a “union state” with Russia. Minsk relies on hefty financial assistance from Moscow to keep its economy afloat.

A bilateral 28-bullet-point outline that would adjoin their economies and foreign policy was agreed to at their latest meeting. Russia already jointly patrols the state borders of Belarus with its border guards and partly owns the country’s strategic natural-gas pipeline network.

“Many commentators now believe [Mr.] Putin is close to achieving the stealth takeover of Belarus without a single shot being fired,” Lisa Yasko, a Ukrainian member of parliament from the pro-presidential Servant of the People party, wrote in a blog for the Washington-based Atlantic Council on September 14.

Kyiv is planning rival military drills with 15 other countries on September 22-30 as the invaded country increasingly finds itself surrounded by hostile neighbors. Called Joint Efforts-2021, 11 of the participating countries are NATO members. The drills will involve 12,500 military personnel, 85 tanks, 420 armored vehicles, 50 artillery installations, 20 vessels and 30 aircraft. 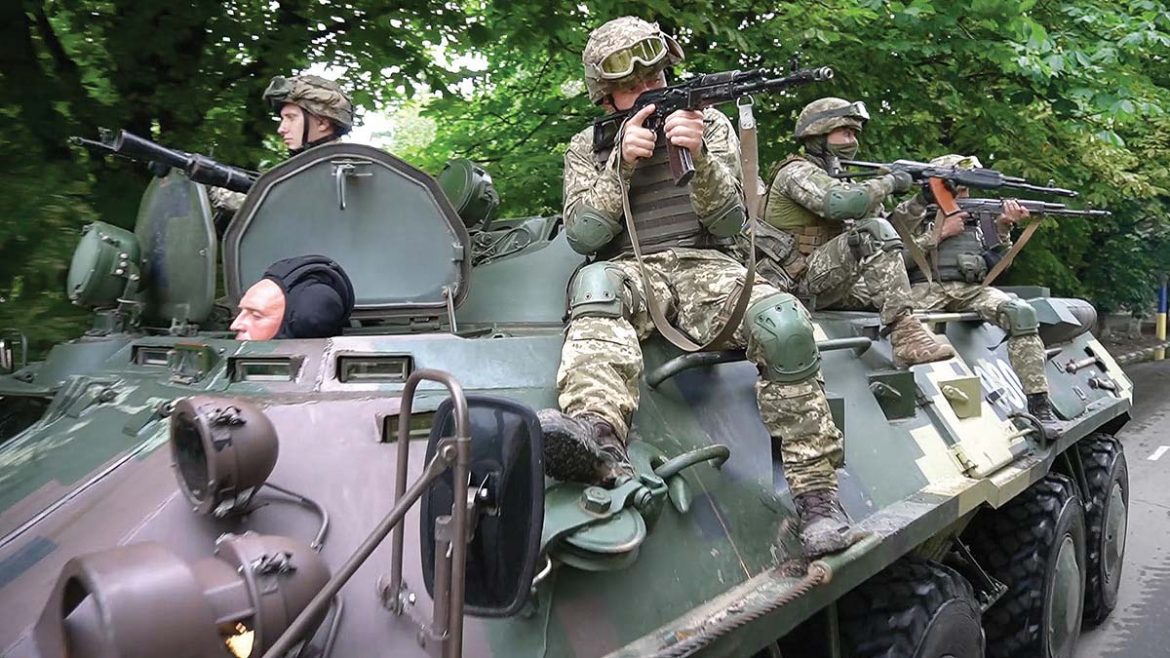 General Staff of the Armed Forces of Ukraine

Ukrainian soldiers atop an armored personnel carrier on September 15.

More than 60 Ukrainian soldiers have been killed so far this year in the war fighting Russian-armed formations. The conflict, which began in 2014, has been fought in the two easternmost regions of Luhansk and Donetsk. It is Europe’s only ongoing shooting war; more than 150 Ukrainian troops have been wounded this year so far.

Ukraine’s Defense Ministry announced additional plans to bolster its military capacity by purchasing 24 more battle-proven Bayraktar war drones from Turkey through this and next year. Valeriy Zaluzhnyi, the commander-in-chief of Ukraine’s army, announced that Ukraine already has 12 drones that were bought previously.

That procurement came after Russia held another massive war game in April when about 100,000 troops were massed along Ukraine’s borders. Western and Ukrainian military experts viewed the move as a dress rehearsal for an invasion, including from the south where the Ukrainian peninsula of Crimea is located. Russia forcibly seized the area in 2014.

Moscow later announced a pullback, but Ukraine’s military intelligence said that most of the military hardware used during the drills was left behind near the country’s state borders and that a new Russian military base was created near Luhansk Oblast.

As Ukraine holds the front line against Russian-led, supplied and trained forces in the east, another possible upgrade to its military might come from the U.S., which has provided Ukraine modern Javelin tank killers.

Politico reported that a proposed bill in the U.S. House of Representatives includes an amendment for next year’s defense draft law that would allow the U.S. “to sell or transfer new air and missile defense systems to Ukraine, including potentially sending an Iron Dome battery currently being operated by the U.S. Army.”

Since March of this year, the administration of U.S. President Joe Biden has signed off on providing Ukraine with $275 million worth of training and weapons to stave off Russian military aggression.

Ukrainian President Volodymyr Zelens­kyy said the proposed amendment to the defense bill is a result of his visit to the White House earlier this month.

At the yearly Yalta European Strategy conference held in Kyiv this month, the Ukrainian president said that an “all-out war” with Russia is possible.

“This is the worst thing that there can be, but unfortunately there is such a possibility,” he said, pointing out that he seeks a substantive meeting with Russian Presi­dent Vladamir Putin, Reuters reported.