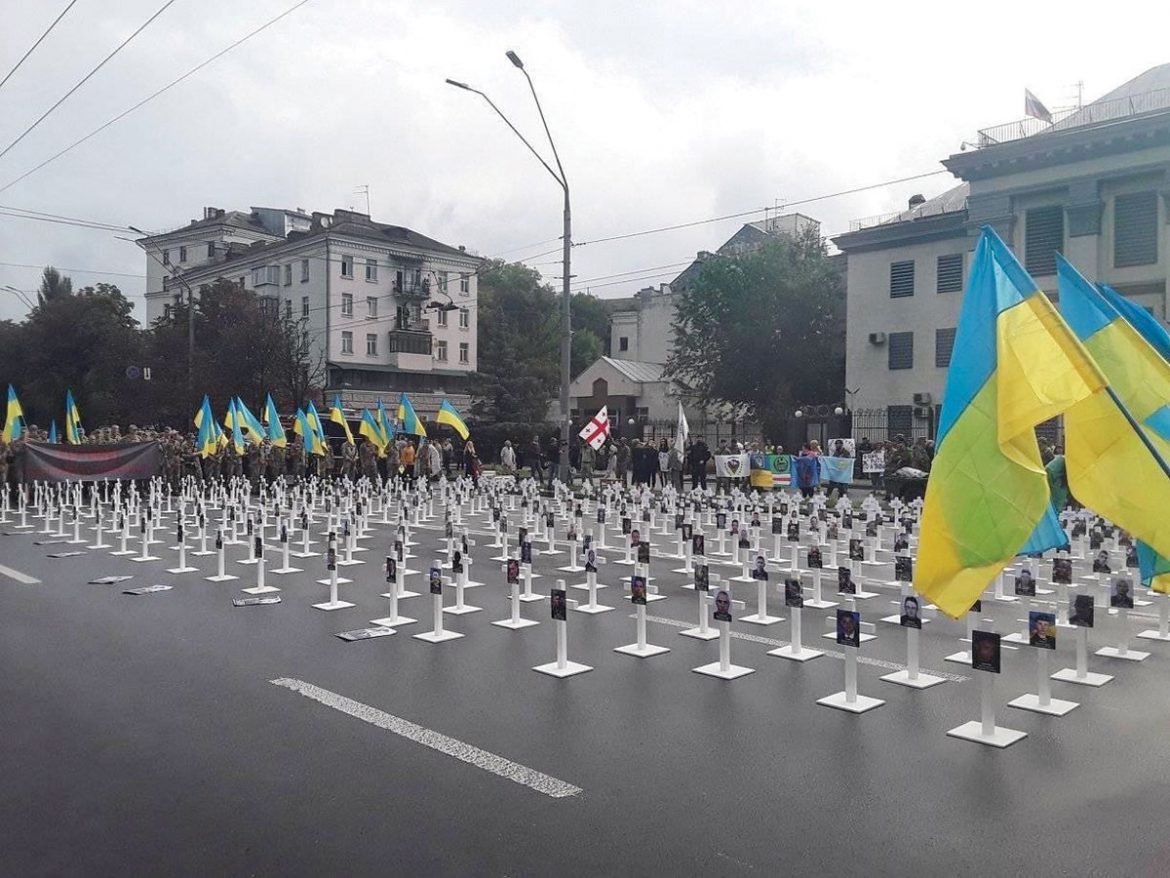 Activists placed crosses in front of the Russian Embassy in Kyiv on August 29 to represent the more than 340 Ukrainian soldiers and volunteer fighters who were killed in the battle of Ilovaisk in August 2014, when Russia sent in regular army and armored units to stop a summer offensive to re-take occupied towns and cities in the Donbas.

KYIV – When the country’s legislature, the Verkhovna Rada, reconvenes on September 4 after the summer break, it will have a presidential bill registered to have European Union and NATO membership enshrined in the Constitution.

President Petro Poroshenko said that government lawyers have “found a formula for doing this optimally and quickly,” during a speech in Kyiv at the Ukrainian Independence Day parade on August 24.

“By the time of the autumn session… my corresponding bill will have been registered,” the commander-in-chief said. “Such integration is a 100 percent guarantee of our independence… Europe needs us as well, because without us the EU will not become a completed project.”

Fifty-two percent of Ukrainians are for joining the EU, a nationwide poll commissioned by the International Republican Institute found in June. And 43 percent of the population supports NATO accession, according to the same survey.

Additional bills considered a priority are on national security and defense, adopting an election code, staffing the Central Election Commission, and laws for continued cooperation with the EU, Verkhovna Rada Chair Andriy Parubiy said at an August 23 briefing.

He noted that the security and defense law that Parliament passed in the previous session is only a general “framework” and that additional “implementation laws” are needed, including one on the Security Service of Ukraine (SBU), which foresees establishing a separate parliamentary committee on intelligence.

Mr. Parubiy expects next year’s budget to be submitted for consideration by September 15, and in October, Parliament needs to legally appoint new members to the Central Election Commission, as well as adopt an election code.

Election watchdogs have urged eliminating single-mandate election districts for Parliament through which half the 450 legislative seats get allocated. Groups like Opora and Committee of Voters of Ukraine say that vote-buying is prevalent in those districts. They’ve also called for having election lists through the proportional voting system be made open to the public – currently only the first five candidates are listed.

Mr. Parubiy noted that over 4,000 “corrections” or amendments need to be made to the existing election code.

More laws need to be adopted to implement existing bilateral treaties and agreements with the 28-nation EU – the world’s second largest economy, the speaker of Parliament added.

A mission by the Washington-based International Monetary Fund (IMF) is scheduled to visit Kyiv on September 6-19. It will provide an assessment on whether to re-new funding and provide an installment of $1.9 billion as part of a $17 billion program that has stalled because Kyiv has failed to meet lending benchmarks, most notably, to keep household natural gas prices at cost-recovery levels.

The politically unpopular measure means that gas tariffs need to be raised by more than 40 percent whereas they have stayed flat since the second quarter of 2016, according to BNP Paribas bank analyst Maksym Burinski. Moreover, in an August 29 resolution, the Cabinet of Ministers extended the rate freeze through September.

“Naturally, the government isn’t going to raise gas prices during an election campaign,” said Alexander Paraschiy of Kyiv-based Concorde Capital. “A successful deal with the IMF in the near term is virtually the only choice for Ukraine to solve its mounting foreign currency liquidity trouble, so we are confident the government will find some way – no matter how unpopular – to secure the needed funds.”

Still, Kyiv expects to receive the IMF tranche by the end of autumn, the deputy head of the National Bank of Ukraine, Oleh Churiy, said on August 28. This would unlock further lending from the World Bank and the European Commission totaling $1.5 billion, he added.

As of August 1, Ukraine’s public debt stood at $76 billion, or 62 percent of the country’s yearly estimated economic output, according to Dragon Capital estimates in Kyiv. “Overall, as the government faces another $4.4 billion of external debt repayments in 2019, support from official donors remains crucial,” Dragon Capital said in a note to investors on August 29.

Mr. Poroshenko asked the Foreign Affairs Ministry this week for the necessary documents to cancel the 1997 Treaty on Friendship, Cooperation and Partnership with Russia. 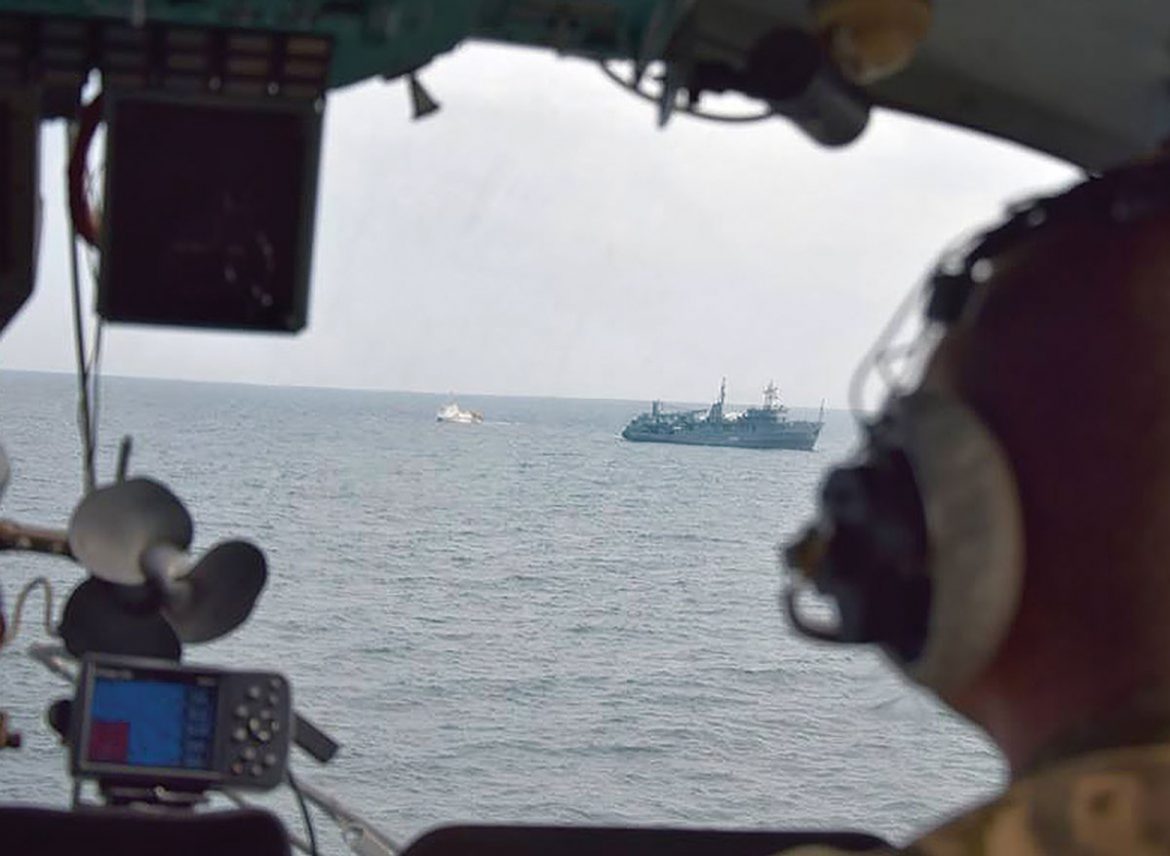 Ukraine’s naval forces on August 29 take part in “Storm 18” exercises in the Azov Sea designed to protect the country’s maritime territory and prevent Russia from enforcing a blockade and arbitrarily detaining vessels passing through.

He also instructed the ministry to provide a proposal for Kyiv to protect its territorial waters in the Azov Sea, where Russia has increasingly detained and arbitrarily inspected commercial ships coming to and leaving the ports of Mariupol and Berdiansk.

“I’m not going to put up with this. I firmly believe that the current situation is categorically unacceptable,” Mr. Poroshenko said of the encroaching Russian blockade at a gathering of Ukrainian diplomats in Kyiv on August 28.

He continued: “The illegal and insidious actions of Moscow in this region should not and will not remain unpunished… without an adequate international response. And here I need your help.”

Army and naval exercises, titled “Storm 18,” ensued on August 29 in the Azov Sea. They were meant to train for a possible Russian invasion of the Azov Sea coastline where Donetsk Oblast’s second largest city, Mariupol, is located.

Ukraine lost control of territory further northeast and east of the port city due to intense cross-border shelling from Russia in the summer of 2014. The same happened in the border areas of Luhansk Oblast. This allowed regular Russian army and armored units to invade and prevent Kyiv’s counteroffensive to liberate more occupied territory in the Donbas war.

As a result, Russian units encircled Ukrainian army and volunteer forces after August 24, 2014, in the city of Ilovaisk, 160 kilometers northeast of Mariupol. More than 360 Ukrainian servicemen were killed after they were fired upon while retreating – despite safe passage that was brokered with Russian officers. More than 150 servicemen remain missing.

Known as the Ilovaisk slaughter, the tragic event was commemorated on August 29 in Kyiv when activists erected 366 crosses in front of the Russian Embassy. The battle of Ilovaisk led to the first of two Donbas war truces that have never taken hold.

More than 10,300 people have been killed in the Kremlin-instigated war and at least 1.6 million are displaced – the largest internally displaced population on the European continent since World War II.