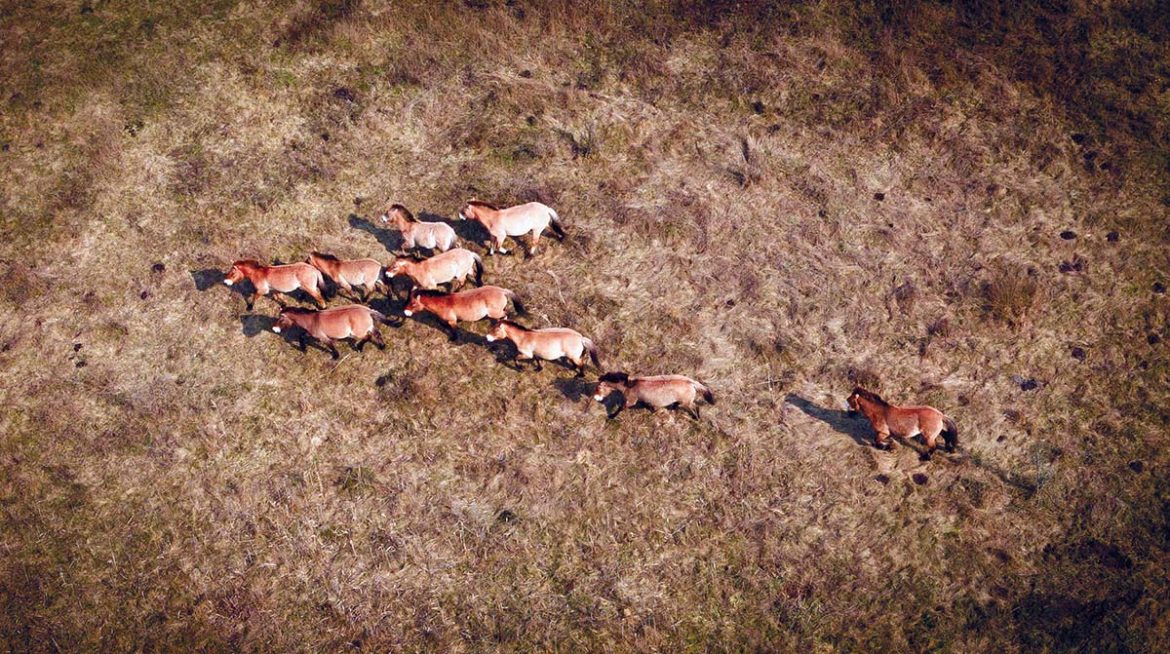 A team of wild Przewalski’s horses gallop across a field in an image taken from drone footage on April 20.

KYIV – To mark the 35th anniversary of the Chornobyl nuclear accident on April 26, the nonprofit European Institute of Chornobyl is holding a series of events to commemorate and raise awareness about the fallout that will include discussions, lectures, a musical concert and an evening memorial vigil.

An official mobile phone application – Chornobyl App – was even developed for users to view the schedule and read more about the mixed online and offline format that runs from April 20 through the end of the month.  That app can be found at http://chornobyl35.com/.

A primary goal of the endeavor is to dispel Soviet myths about the nuclear fallout that still linger in society today, the project website says.

A survey commissioned by the Culture Ministry at the Kyiv International Institute of Sociology found that 60 percent of adult Ukrainians do not know the date when the fourth reactor at the Chornobyl Nuclear Power Station exploded on April 26, 1986.

Thirty-one people died in the first days of the accident, and an estimated 4,000-10,000 died later from causes related to radiation exposure.

The explosion released the most radioactive material at one time in an accident emitting “an estimated 45 million curies of radioactive iodine (among other elements) …into the atmosphere,” Massachusetts Institute of Technology professor Kate Brown wrote in the Washington Post.

However, Belarus, where 70 percent of the fallout landed, Russia and Ukraine “have no public tallies of Chornobyl-related fatalities” to update long-term health effects, she said.

Chornobyl-caused cancers will reach 41,000 by 2065, the United Nations’ International Agency for Research and Cancer estimates.

Ukraine’s government says that 1,747,803 people were victims of the fallout as of July 2020. There are also 185,206 surviving “liquidators” who took part in extinguishing fires and containing the nuclear disaster.

One myth is that the accident only had regional consequences, which the MIT history professor debunked.

Swedish scientists are credited for first reporting the incident, which took place in Pripyat, a town Soviet authorities built from scratch to house families of the employees of the nuclear plant about 100 kilometers (62.5 miles) north of Kyiv.

The public received official news of the radioactive fallout only three days after a virtual news blackout and the Soviet government in Kyiv went ahead with a scheduled Labor Day parade on May 1 despite high radiation levels in the air.

Contaminated milk was found as far away as northern England and the sale of sheep sourced from southern Scotland was suspended, for example.

Soviet authorities almost immediately started evacuating Pripyat following the explosion. Some 50,000 residents had been relocated within 36 hours of the incident.

Eventually, 116,000 people were removed from the area while an exclusion zone was created within a 30-kilometer (18.75 miles) radius around the damaged plant.

Five years ago, a new safe confinement at the infamous fourth reactor was completed at a cost of 1.4 billion euros financed by an international consortium of countries and was designed and built by a French-led team of engineers and scientists. It has a life span of 100 years.

Left mostly untouched by human intrusion since 1986, wildlife in the area has rejuvenated.

Denys Vishnevskiy, head of the research department at the Chernobyl Radiation and Environmental Biosphere Reserve, has documented the regrowth in flora and fauna on his Facebook page with the use of drones and camera traps.

Some 60 feral Przewalski’s horses, introduced in 1998, roam the area. Up to seven wolf families have been counted and wild boar, moose, brown bears, European bison, deer and roebuck also have made the area part of their habitat.

Since they’re part of what Mr. Vishnevskiy calls “umbrella species,” this indicates that the ecosystem in the exclusion zone is healthy.

Since the HBO Chernobyl miniseries aired in May 2019, tourism to the area has steadily grown.

Ahead of this year’s anniversary, 40 kilometers of road between the main checkpoint into the Exclusion Zone and Pripyat has been repaved.

“Our task is to put in order the popular tourist routes in three years and provide normal access to the zone for conservationists, scientists, power engineers and entrepreneurs,” Oleksandr Kubrakov, head of the state highway agency Ukravtodor, wrote in a Facebook post.

Last year, the Ukrainian Sea Ports authority dredged the Pripyat River for boat tours to commence from Kyiv to Chornobyl. About 130,000 cubic meters was dredged along 64 kilometers (40 miles) between the Kyiv Sea and Belarus border. This allows passages for boats with a maximum draft of 1.6 meters (1.75 yards).