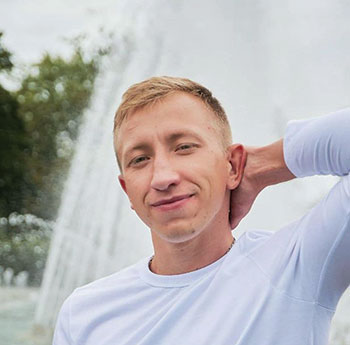 Belarusian Home in Ukraine via Telegram

Belarusian House head Vital Shyshou was found “hung” in a park near his home in Kyiv on August 3.

KYIV – Ukraine’s capital bore witness to a chilling death on August 3 when an exiled Belarusian activist was found hanged in a park near his residence where he went for morning jogs.

Vital Shyshou, 26, had headed the Belarusian House in Ukraine (BDU) that provides legal, housing and employment assistance to other exiles like himself, who have fled their country to escape the despotic rule of self-proclaimed Belarusian leader Alyaksandr Lukashenka.

His death, which police are investigating as either “suicide disguised as death or suicide,” sent shockwaves throughout Ukraine’s Belarusian exile community. Ukraine is a favored destination for Belarusian citizens seeking refuge, especially among the country’s 70,000 information technology specialists.

A subsequent medical forensic examination found that Mr. Shyshou had lacerations on his nose, lip and on one knee “consistent with someone falling face forward,” either by “falling or being pushed,” said National Police chief Ihor Klymenko at a briefing in the afternoon on August 3.

Ukrainian President Volodymyr Zelenskyy announced that the inquiry into the activist’s death has been taken under his personal control. Meanwhile, Foreign Affairs Minister Dmytro Kuleba tweeted that “Ukraine will do everything possible to fully investigate the case: it is of [the] utmost importance for us to reveal the truth about his tragic death.”

A vigil that took place on the evening of the activist’s death at the Belarusian Embassy in Kyiv drew dozens of demonstrators, most of whom were Belarusians.

Fellow BDU activist Yury Shchucho, who found his colleague’s hanged body, told local reporters that “hit squads” from Belarus’s security service have been sent to Ukraine to “liquidate” dissidents who oppose Mr. Lukashenka’s 27-year-old authoritarian grip on the country that neighbors Ukraine to the northwest.

He cited knowledge from “informal and formal channels…including the SBU [the Security Service of Ukraine] who’ve told me that they” want to assassinate Belarusian nationals living abroad who oppose the dictator’s rule.

The exile help group was officially established in December, according to registrar data, and the SBU banned its co-founder, Rodion Batulin, from entering Ukraine as of July 23 over national security concerns.

Another member of the group from its outset is an alleged neo-Nazi who is from Russia but was raised in Belarus: Serhiy Korotkykh. He is a naturalized Ukrainian citizen who fought in the war in eastern Ukraine against Russian-armed formations. He joined the volunteer battalion Azov in April 2014 and led a reconnaissance unit. He has since the hanging told local reporters that he opposes “autocratic regimes led by Lukashenka and [Russian President Vladimir] Putin” and wants to see both Ukraine and Belarus as “part of Europe.”

The U.S. State Department has labeled Azov as “a nationalist hate group” and in November 2014 the group was integrated into the National Guard overseen by the Internal Affairs Ministry. Its former leader, Kharkiv-native and ex-lawmaker Andriy Biletsky, currently heads an affiliated nonprofit organization and a political party called National Corps.

Mr. Shyshou’s death immediately led to suspicions of foul play amid growing concern that Belarusians abroad are under threat from the grasp of Mr. Lukashenka’s security apparatus.

The activist’s Belarusian partner, Bozhena Zholud, told reporters in Kyiv that her boyfriend’s death couldn’t have been an act of suicide because they “had plans for the future.”

“Vital had no parents or family – they all died. He worked as a freelance IT specialist. There was no such thing as him complaining that he was being watched. But lately, Vital has become more attentive – sometimes he looked at which cars approached, which of them came out…” she said.

His hanging coincided with a defection by a female Belarusian sprinter at the Summer Olympics being held in Tokyo, Japan. Krystsina Tsimanouskaya, 24, landed “safely” in Warsaw on August 4 after a public feud with her country’s Olympic officials who she said “made it clear” that she should be punished upon returning home, the Associated Press reported.

Her husband fled to Kyiv. He plans to rejoin his spouse in Poland.

Following her dissent, another Belarusian athlete, heptathlete Yana Maksimava, said she and her Olympic-medalist husband have decided to stay in Germany with their child amid the decades-long crackdown on pro-democracy movements in Belarus.

In a social media post on August 3, Ms. Maksimava said in connection with Belarus’s worsening situation and international isolation that “now one can lose not only his or her freedom, but life,” the BBC reported.

Last summer, Mr. Lukashenka claimed victory in a rigged presidential election that the west, including Ukraine, did not recognize. Sanctions were subsequently imposed by Washington, the European Union and Kyiv over a severe clampdown on protests, police brutality and numerous human rights abuses.

His main opponent, Svyatlana Tsikha­nou­skaya, who fled to neighboring EU-member Lithuania in August 2020 as a second night of protests assembled over the fraudulent election, has urged foreign governments to impose stricter financial sanctions on the Belarusian dictator’s regime.

Opposition journalist Roman Protase­vich was dragged off a commercial airliner on May 23 after Belarusian authorities forced the Greece-Lithuania flight to land in Minsk.

Another fear of Belarusian and other foreign security services operating on Ukrainian soil is the death of Minsk-born journalist Pavel Sheremet, who died when an improvised explosive devise detonated and exploded in his vehicle on July 20, 2016.

His murder is still unsolved, yet three Ukrainians – all with ties to the war in eastern Ukraine – have been labeled suspects and have been placed under restrictive detainment measures.

The three suspects, Yana Duhar, Andriy Antonenko and Yulia Kuzmenko, all deny any involvement in the murder.

Audio recordings from 2012 of former Belarusian KGB chief Vadzim Zaytsau revealed an alleged plot to kill critics of the self-proclaimed Belarusian president. They were verified by the Crime Lab for Audio and Video Documents in Saint Petersburg, Russia.

“How to provoke a natural explosion…it is necessary to work on [Mr.] Sheremet, who [became a pain in the butt]…. We will place some kind of input or something so that this rat’s f…ng…hands and legs could not be collected,” Mr. Zaytsau says on the leaked tape, as cited by Radio Free Europe/Radio Liberty.