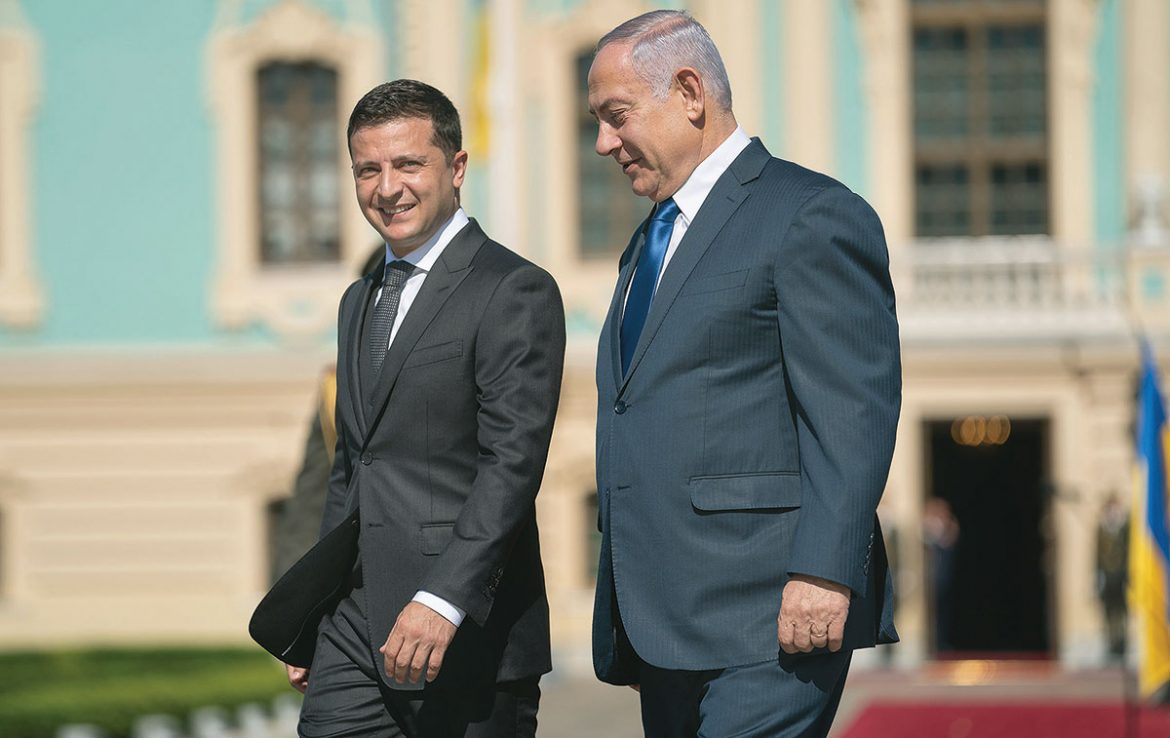 KYIV – During Israeli Prime Minister Benjamin Netanyahu’s official visit to Ukraine on August 19-20, which is being hailed as “historic” by both sides, Ukraine’s President Volodymyr Zelenskyy cited the two countries’ “long-standing historical ties.”

“Our nations have together experienced all the tragedies of recent history – the Holodomor and the Holocaust, the second world war, the totalitarian Soviet regime,” Mr. Zelenskyy stated.

Mr. Netanyahu, who cited “the excellent relationship between the two countries,” called for stronger ties between Israel and Ukraine, emphasizing, “We can seize the future separately, but we can do it better together.”

Mr. Netanyahu’s two-day visit was indeed historic, as it was the first visit by an Israeli prime minister in 20 years, but it also responded to pressing current challenges. The visit helped clear the air by addressing some issues and downplaying other contentious ones, while at the same time bolstering existing ties and looking ahead to future cooperation in various spheres.

It was also the latest test for Ukraine’s new president as to his projection of the country’s interests and his understanding of how to move forward. Mr. Zelenskyy commented on his Facebook page that he’d met with an Israeli leader “in whom I sense a reliable partner and friend of Ukraine.”

Ukrainian-Israeli relations, Mr. Zelenskyy elaborated, are entering “a new phase.” The bilateral free trade agreement signed in January has already been endorsed by the Ukrainian Parliament, and it awaits ratification by the Knesset. New bilateral agreements were signed during Mr. Netanyahu’s visit in the areas of education, culture and sports, and there are prospects for cooperation in the agriculture sector and economic relations, as memoranda of understanding in those spheres were signed by the two parties.

Agreement was apparently reached on resolving the issue of Israel’s refusal to issue visas to many visiting Ukrainians. “We are talking about numerous refusals for Ukrainian citizens to enter Israel. We have agreed to finally solve this problem. Citizens of both states should take advantage of a visa-free regime, and thousands of Ukrainian citizens should not be detained at the border,” President Zelenskyy said at a joint briefing with Prime Minister Netanyahu.

According to Ukraine’s State Border Guard Service, since the beginning of 2019, 2,700 Ukrainians were denied entry to Israel, while 716 Israelis were denied access to Ukraine.

Another sensitive issue was that of Ukrainian pensions for some 8,000 Ukrainian seniors in Israel who immigrated after the country gained independence from the Soviet Union in 1991. Mr. Netanyahu mentioned that Mr. Zelensky said he would propose in the Verkhovna Rada the ratification of a pension agreement.

Significantly, Mr. Zelenskyy said Ukraine wanted to take into account Israel’s experience in the areas of security and defense. “As a state, we have a lot to learn from Israel,” he stressed. But the Ukrainian president, being aware of Israel’s balancing act between Russia and the United States, was cautious and tactful. He thanked Israeli for its continued support of Ukraine’s territorial integrity and as regards the war in the Donbas and the annexation of Crimea. But he did not press further.

Thus, Mr. Zelenskyy did not raise the issue of Mr. Netanyahu’s possible role as a mediator between Moscow and Kyiv, as had been suggested in some news media before the visit. According to The Times of Israel, the Israeli prime minister, who is close to both the American and Russian presidents, said he was not averse to helping out, but that, “Currently, however, conditions are not ripe for concrete discussions about Israeli involvement as Russia and Ukraine are currently not engaged in serious peace talks.”

Nor did Mr. Zelenskyy fall for the highly politically charged topic of moving Ukraine’s Embassy to Jerusalem. Instead, Mr. Netanyahu himself announced that the Ukrainian side had agreed to open a hi-tech and investment office in Jerusalem, and that Israel would open a similar bureau in Kyiv.

The fact that an Israeli prime minister was visiting a country where, for the moment, both the president and the prime minister are of Jewish origin was not ignored by Ukrainian, Israeli and international commentators. One Ukrainian observer, Anastasia Herasymchuk, even suggested that Mr. Netanyahu wanted to visit Ukraine while this was still the situation in order to secure votes from the sizable number of Ukrainian Jewish emigrants to Israel in Israel’s parliamentary elections on September 17.

Commenting on the broader context, the chief rabbi of Ukraine and Kyiv, Moshe Reuven Azman, said on August 16: “The Ukrainian people have become a mature people, they are tolerant, they are difficult to outwit. It’s not easy even to fool them with propaganda.”

Alluding to the recent presidential election in Ukraine, the chief rabbi added: “We can see it even just from recent events, there is no need to prove… Today, when I am asked about the level of anti-Semitism in Ukraine, I say that anti-Semitism exists in almost all countries where Jews live, and even where they do not live. But in Ukraine, it is much less than in Russia or in Europe.”

Mr. Netanyahu, who as prime minister of Israel had visited Ukraine in 1999, was taken by Mr. Zelenskyy to pay his respects at Babyn Yar, the killing field outside of Kyiv where in September 1941 tens of thousands of Jews and others were executed by the Nazis as part of the Holocaust. “For humanity, Babyn Yar is a warning sign,” he said. “For Jews, it is an eternal imperative – we will always defend ourselves, by ourselves, against any enemy.”

Mr. Zelenskyy spoke at Babyn Yar of “this terrifying and tragic page of the common past of the Ukrainian and Jewish nations.” He noted that German occupation troops carried out mass executions and that, having killed all the Jews they could find, the Nazis began to kill the others – war prisoners, Roma and Ukrainians who were fighting for their country. “According to various sources, during the Nazi occupation from 70,000 to 200,000 people were killed in Babyn Yar,” the president said.

Not all observers pointed out, as Herb Keinon reported in The Jerusalem Post on August 20, that that “Netanyahu’s state visit began” that day “with a visit to the monument to the Holodomor – the famine in the Soviet Ukraine in 1932-1933 during which millions starved to death. Zelensky, during his statement, asked Netanyahu to recognize the Holodomor as a genocide.”

The Times of Israel reported that Mr. Netanyahu “placed a small wheat basket at a monument in Kyiv for the victims of the Holodomor on Monday [August 20] in a short ceremony that all foreign dignitaries visiting Ukraine are asked to partake in.”

Prime Minister Netanyahu met not only with President Zelenskyy, but also with the outgoing Ukrainian prime minister, Volodymyr Groysman, whom Mr. Zelenskyy has opted not to retain. The two prime ministers seemed pleased and upbeat in the official photos of their meeting.

According to the Ukrainian Cabinet of Ministers, during the first half of 2019, trade turnover between Ukraine and Israel exceeded $445 million. The key export items are cereals, oils, metals and wood, and the opening of a full free trade zone will facilitate, among other things, agricultural exports from Ukraine to Israel.

Israel has invested more than $50 million in the Ukrainian economy, and the bilateral free trade agreement should “open up new opportunities for effective realization of the existing potential in trade and investment cooperation, especially in the sphere of IT and new technologies,” the Ukrainian government’s website noted.

Mr. Keinon of The Jerusalem Post also reported that the prime minister’s official trip “got off to a clumsy start when his wife, Sara, who was unfamiliar with the ‘korovai’ ceremony, was caught on camera dropping a piece of bread that her husband handed to her after he was ceremoniously given the morsel by women in traditional dress who greeted them when they landed at Boryspil International Airport” on the evening of August 18.

The Post’s story went on to say: “Some in the Israeli media highlighted the incident and reported that the prime minister’s wife had thrown the bread to the ground. This was then picked up by some in the Ukrainian media as a sign of disrespect. Netanyahu dismissed this as ‘complete nonsense’ and told reporters that he raised the issue with the head of the Ukrainian President’s Office, whom he quoted as saying, ‘it was clear that there was no intention of Mrs. Netanyahu to show disrespect to Ukraine.’ ”