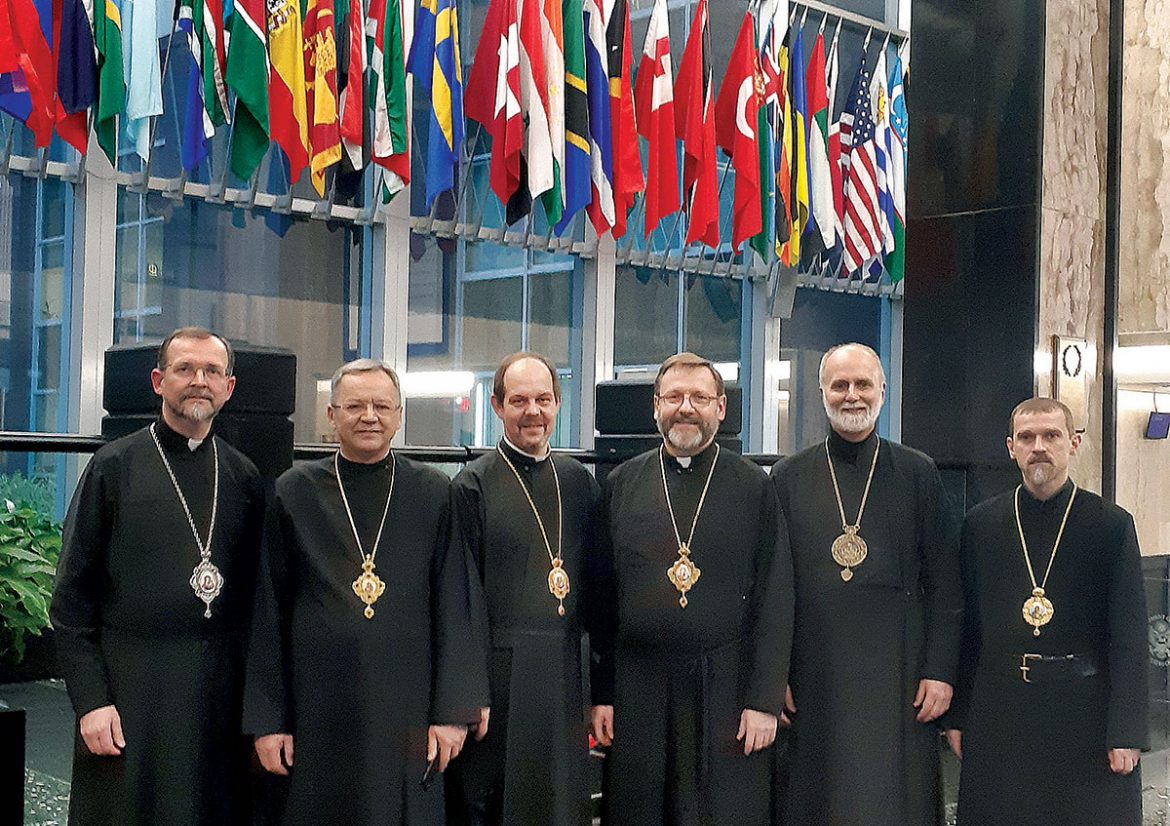 WASHINGTON – On December 9-12 the head of the Ukrainian Greek-Catholic Church, Patriarch Sviatoslav, together with the bishops of the Permanent Synod – an executive committee that helps the patriarch in leading the Church – visited Washington.

In addition to their working sessions, the bishops met with the Apostolic Nuncio to the U.S.A. Archbishop Christophe Pierre, representatives of the State Department, the U.S. Conference of Catholic Bishops, the Catholic University of America, and others.

“The Permanent Synod’s goals are manifold,” noted Patriarch Sviatoslav in a comment to The Ukrainian Weekly. “We usually have our internal agenda. We discuss and decide how to resolve particular Church issues. We as a Synod meet a few times a year, but once a year, bishops of the Synod visit local Church communities to listen to the people in order to understand the authentic reality of our global Church. We always meet with representatives of the state authorities and leaders of Roman Catholic communities as the heart of local life.” He pointed out that for the first time in history they met in Washington.

Among many matters the bishops discussed, was a 10-year pastoral plan (strategy) for the UGCC. Metropolitan Borys heads the committee that will work on the strategy.

The pastoral plan was among the topics discussed during the meeting with the apostolic nuncio. “We ask ourselves: How do we dream about our future? What kind of Church should we be? We must place the wounded human being at the center of our pastoral mission. Our goal is spiritual healing,” Patriarch Sviatoslav emphasized.

He said he believes that, because of the abuse scandals, the Catholic Church in the U.S.A. is experiencing tremendous pain and is now going through a purification process.

During their meeting with Msgr. Brian Bransfield, general secretary, and other representatives of the U.S. Conference of Catholic Bishops, Ukrainian Catholic leaders expressed their gratitude for the support the USCCB gave the UGCC to strengthen and rebuild its structures.

It is worth mentioning that it was precisely 30 years ago, after the historic meeting between Pope John Paul II and Soviet leader Mikhail Gorbachev, that the Ukrainian Greek-Catholic Church, which was persecuted by the Soviet regime, was given the right to develop and establish parishes.

“Today in Washington, Ukraine is associated with corruption. It is important for American officials and politicians to see healthy initiatives in Ukraine. The Church community can be a partner even in the fight against corruption,” said Patriarch Sviatoslav, referring to the activity of the UGCC anti-corruption office and the anti-corruption document the Church issued in 2016.

“The Permanent Synod took place during days of political turmoil in the U.S.A. and at a time of important decisions to be made regarding Ukraine, particularly regarding the war Ukraine that is ongoing as a result of outside aggression,” added Metropolitan Borys. 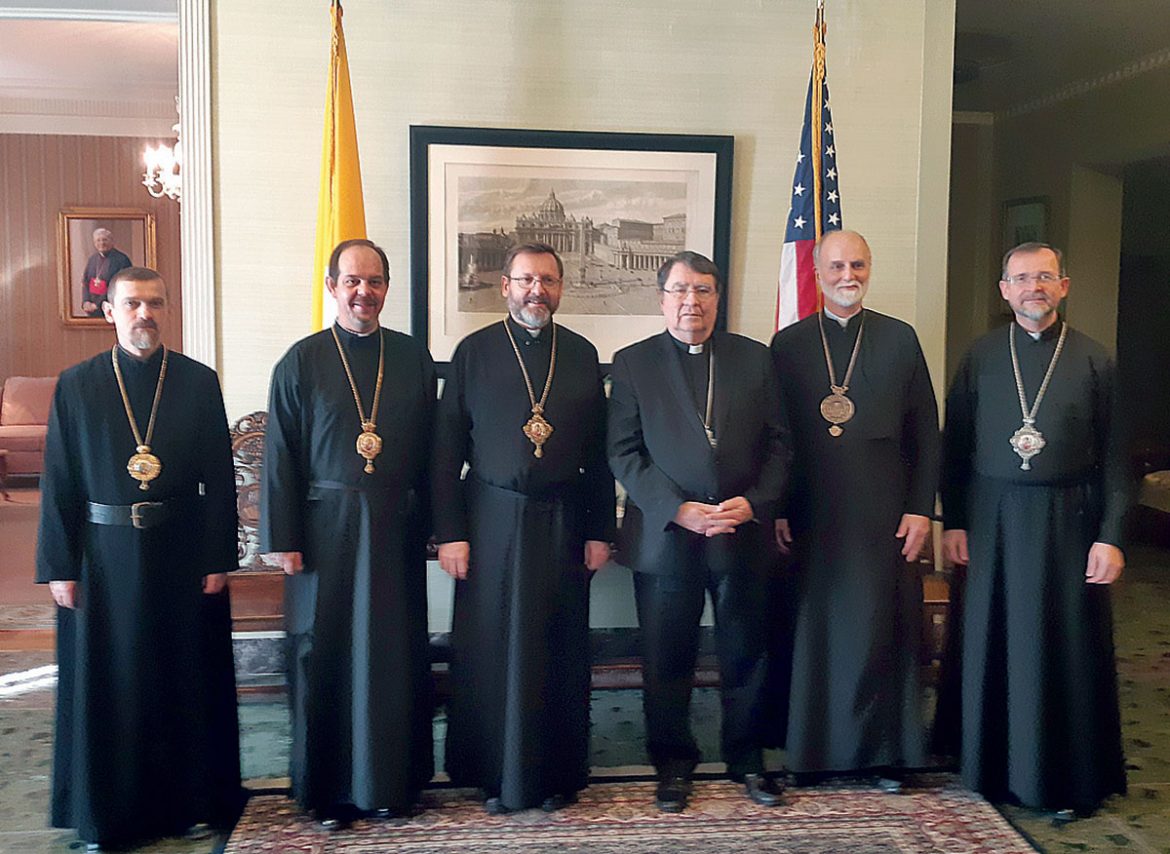 At a meeting at the Apostolic Nunciature on December 12 (from left) are: Auxiliary Bishop Teodor Martyniuk of Ternopil, Bishop Bohdan Danylo of Parma, Ohio, Patriarch Sviatoslav, Apostolic Nuncio to the U.S.A. Archbishop Christophe Pierre, Metropolitan Borys Gudziak of Philadelphia and Bishop Bohdan Dziurakh.

The bishops of the Permanent Synod also took part in the Sobor (assembly) of the Philadelphia Archeparchy on December 7-8. Focused on communion and unity in Ukrainian Catholic communities and the global Church, the Sobor gathered almost 200 participants – clergy, religious and laypeople.

“The presence of the UGCC’s head and the Permanent Synod members highlighted the weekend of sincere exchange of ideas, powerful spiritual witness, joyful personal encounter – all in the context of deep and beautifully expressed prayer,” commented Metropolitan Borys. He explained that many people representing parishes of the Philadelphia Archeparchy had met for the first time.

While the first session of the Sobor in October was held at the cathedral, this time Sobor participants visited different places where the faithful, especially the young, gather on a typical Saturday. “The diversity of the encounter made the Sobor a festival of perspectives and mutual enrichment,” the metropolitan summed up.

Patriarch Sviatoslav called the Sobor a unique space for listening. “We need to understand where we are and how the Church can encounter its people – both spiritually and geographically,” he said. Speaking with the clergy and the faithful, the bishops tried to understand if the existing parish network correlates with the locations where Ukrainians live in the United States.

Patriarch Sviatoslav observed that most of the UGCC’s parishes are on the East Coast, where Ukrainians settled over 100 years ago, but now they live throughout the U.S., and the Church needs to respond to this change.

“We need to encounter our people where they are, in what they need and in what they are living through,” concluded the 49-year-old head of the Church. “We also need to bring the Church back to the heart of Ukrainian community.”