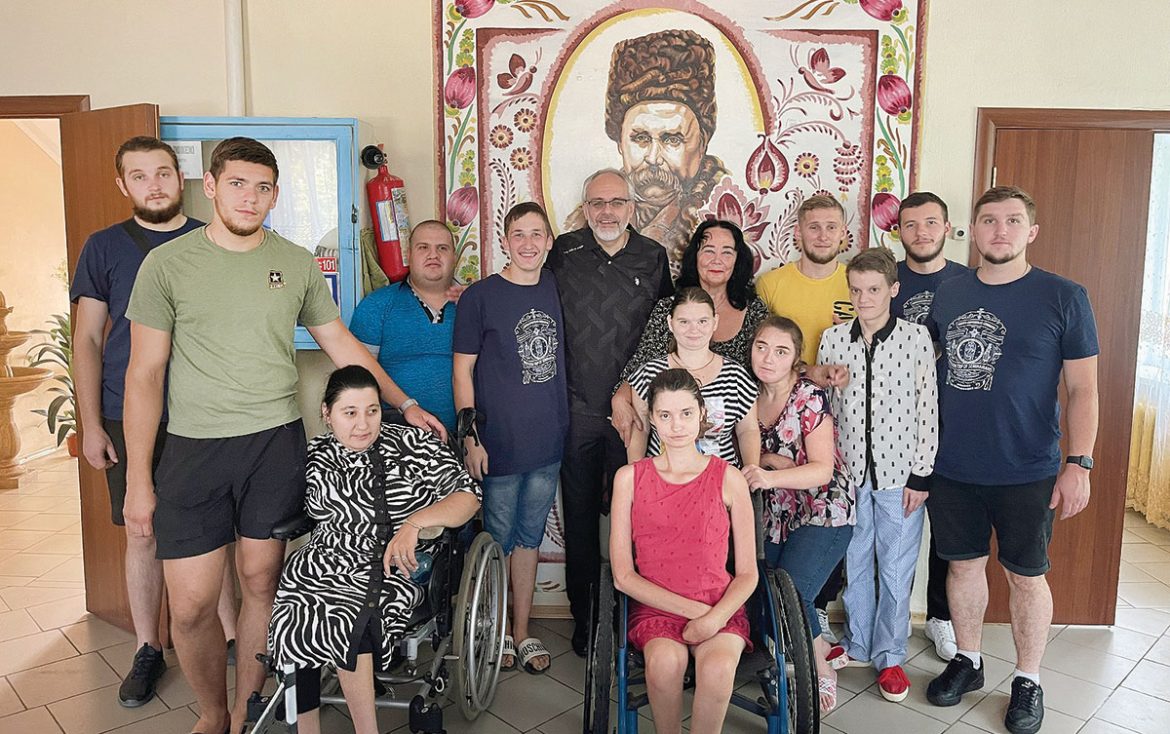 The Mission Team with children of Znamyanka Orphanage in Ukraine.

The cost of the trip for the seminarians was covered in part by their own fundraising efforts, including the sale of a Nativity CD and food sales. Far from being a vacation, the archbishop reminded the seminarians, “The Lord instructed us all to care for our neighbors; to spread love and mercy; to feed, clothe, and visit the ill… knowing full well that when we do this, especially for those who are the most helpless and innocent of society, we do this for God.”

While at the orphanage, the archbishop visited individually with each child, praying over them, offering God’s blessings, reminding them of their personal value, and asking God’s mercy for them. Mission team members took on responsibilities to feed the children, play with them, read to them and offer a human touch in their otherwise isolated lives.

Other activities at the orphanage included singing with the children. The activity was led by the orphanage director and their music teacher Tetiana Andriivna Valko, and the seminarians were enchanted by their talent. Baking and cooking demonstrations also showcased the children’s talents and life skills. 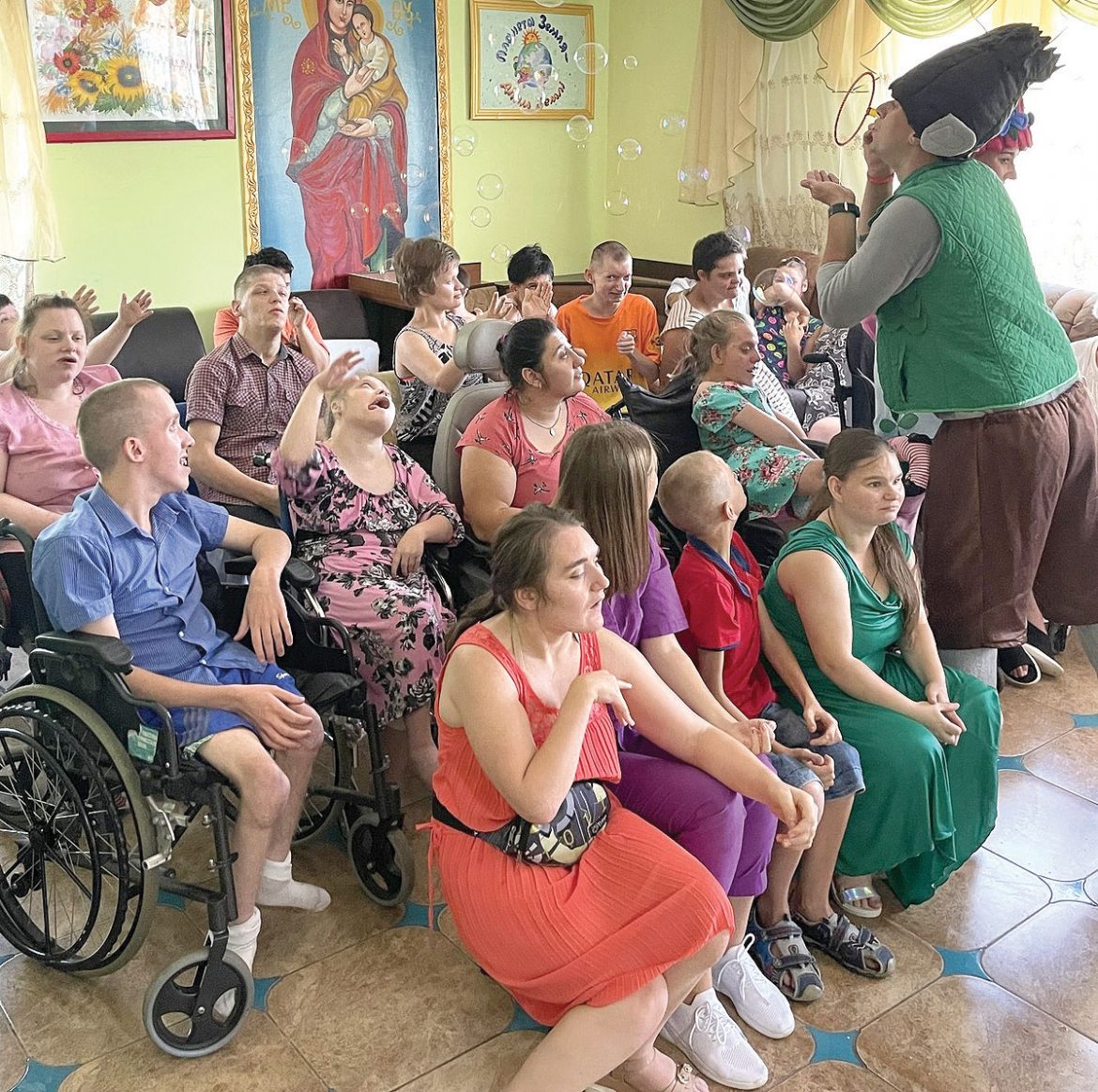 A local theater group enchants the children by blowing bubbles.

An outing for some ice cream was a real treat for the children, but it also showed how many of the local population view the disabled children, and the work that is needed in Ukraine for acceptance and infrastructure for handicapped accessibility. During this trip, Archbishop Daniel also purchased sugar, flour, diapers, as well as arts and crafts supplies for the children. In a second outing he was joined by the other mission team members in purchasing a butchered pig (145 kg), which was canned and frozen for use by the orphanage during the weeks ahead.

Daily morning and evening prayers were led by Archbishop Daniel and the seminarians, followed by a brief reflection from the seminarians on the daily struggles of those at the orphanage, their longing for friendship, willingness to help one another, as well as their joy in the midst of such difficulties. The archbishop also met with the State’s Commission on Handicapped Individuals, noting the improvements already made in handicap accessibility, but underscoring that there is much work left to be done in meeting the needs of the elderly as well as the orphaned children. He also met with Serhiy Yamanayev, a former resident of the Znamyanka Orphanage who was able to move out and live on his own, highlighting the life skills gained from living at the orphanage, despite living with regular dialysis treatments.

Arrangements were also discussed to address specific safety issues at the orphanage, including the installation of new electrical cables and a new perimeter fence, as the old one had fallen into disrepair.

Archbishop Daniel also met, informally, with the leadership of the Znamyanka Mayor’s Office. He expressed gratitude to the officials for their cooperation in installing a new sidewalk in front of the orphanage, which makes life for the children with disabilities a bit safer and easier to maneuver.

A local theater group performed a skit for the children that was met with squeals of laughter from the children, particularly after large bubbles were created, floated over the children and were popped. Members of the public were invited to join the performance, and sales of desserts and cookies (prepared by the children for the benefit of educational programs) helped to break the ice between the local residents and the children.

On the fourth day of their visit, the mission team seminarians entertained the children by acting out a rendition of the children’s play “The Turnip” (Ripka). Each child was invited to come to the aid of the grandfather, grandmother and others as they attempted to uproot the turnip. An encore performance of the Ukrainian classic, “The Dumpling” (Kolobok), highlighted the cunning escapes of the Kolobok, but it finally succumbs to an even more cunning adversary – the fox. 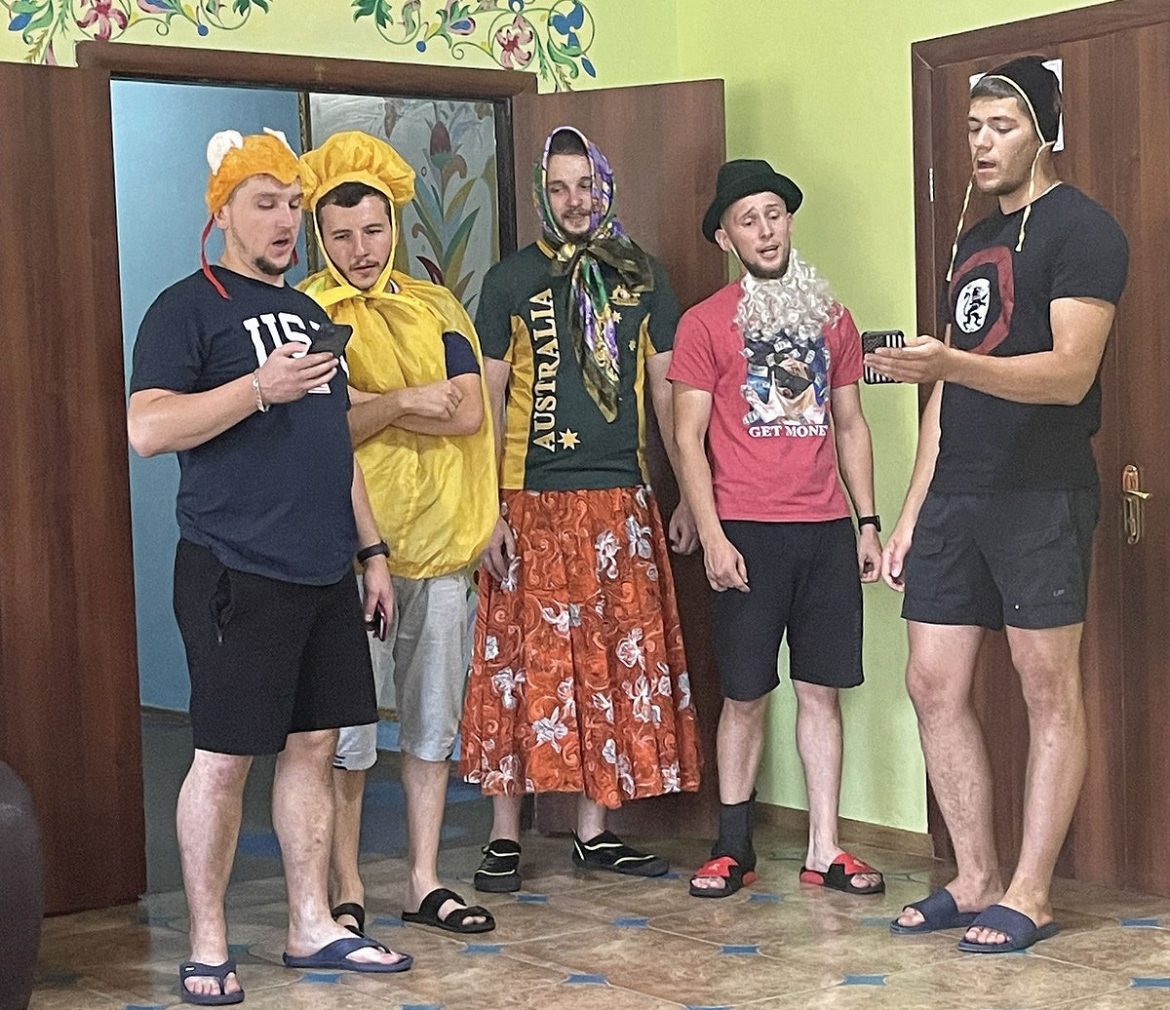 The children presented Archbishop Daniel with an embroidered image of Christ reaching out His arms to the peoples of the world. He thanked the children for the gift, and expressed his joy at seeing them from year to year, watching them as they grow, reminding them that they are remembered by the team members in their daily prayers.

During an evening walk, the children played with local cats and dogs, with owners allowing the children to hold and pet the animals. It was unclear who had more fun, the children or the puppies.

Ms. Valko thanked the mission team members for their work and presented each with a certificate of gratitude. A moleben service was led by Archbishop Daniel for the health and well-being of the children, staff and administrators of the orphanage, as well as for the benefactors and supporters of the Charitable Mission of the UOC-U.S.A. Archbishop Daniel then proceeded to bless with holy water each child at the orphanage, each room of the facility, the grounds, as well as the newly installed fencing.

The mission team bid farewell to the children and staff of Znamyanka Orphan­age, promising to return in the future. Archbishop Daniel offered a final blessing for the children before he joined the seminarians in departing.