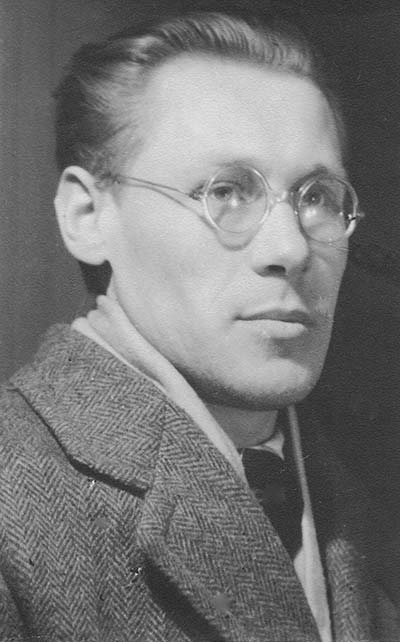 An undated photo portrait shows Poltava in his younger years.

NEW YORK – In 1955, two years before the Soviets launched the first artificial Earth satellite, Sputnik 1, Leonid Poltava published his Ukrainian spy-novella “Will the Sun Rise Tomorrow” (Chy Zijde Zavtra Sontse). Captivating readers with cloak and dagger cliffhangers à la Tom Clancy or Ian Fleming, his narrative also explored serious concerns about tomorrow’s technology, foretelling a time when energy supplies of gas, oil and even uranium are almost exhausted, and parched food harvests loom. All told, “Will the Sun Rise Tomorrow” was a brave look into the future by an accomplished story teller.

In Poltava’s fast paced futuristic thriller, a new and free Ukrainian government races to recover from thieving Russian spies a Ukrainian Canadian’s recent discovery of the technology used to extract energy from ubiquitous lead ore. Along the way, the author poetically exalts the Ukrainian countryside, its people’s spirit, their national ideals and their nation’s responsibilities to humanity (Unlike Moscow, Kyiv pledges to share the discovery with the entire world).

Yet, perhaps even more fantastic than this sci-fi adventure were the actual life and kaleidoscopic activities of its author, Leonid Poltava. Born one century ago in Romny, Sumy Oblast, on August 24, 1921, Poltava began writing as a child, but he destroyed all of his early poems in dread of the NKVD, a fear induced by witnessing his father’s arrest and disappearance in Siberian exile. Poltava himself survived the Holodomor, years in a German labor camp and Potsdam prison.

Today, one can barely imagine the myriad social and cultural activities once generated by resourceful Ukrainian refugees throughout post-war Displaced Persons camps in Germany and other countries. These exiles created their own school systems, operated their own bakeries and medical units, organized choirs, theatrical and opera ensembles and even established printing centers. Poltava often had opportunities to meet with circles of like-minded litterateurs in other camps. It was in Augsburg (in 1946) that he published his first collection of poems “Behind the Walls of Berlin” (Za Muramy Berlinu).

Poltava’s unquenchable thirst for experience, his unflagging willpower and perceptive eye would accompany him across the world via his many activities as a poet and novelist, journalist, translator and playwright/librettist. As these interests evolved, Poltava befriended and translated German, French, Spanish, Polish and Russian authors and poets. Impressions of Vienna, Berlin, Paris, Madrid, Rome, Morocco and London left their imprint on his diverse works.

In Madrid, Poltava worked for two years in the Ukrainian sector of Spanish National Radio. He followed this with four years in broadcasting for Radio Svoboda in Munich. He was later also employed by Voice of America in Washington. Poltava was first married in Paris; his son Ivan Alexander now lives in California. In 1974, Poltava wed Halyna Dykyj with whom he shared a happy and productive life for the remainder of his days. He died in 1990 and is buried in St. Andrew’s Ukrainian Cemetery in South Bound Brook, N.J.

This writer is grateful for having had the opportunity to meet and speak with Poltava in the 1980s. Throughout his life, Poltava always championed the importance of producing suitable literature, poems, plays and musicals for children. His love for children was matched by a lively imagination and puckish sense of humor; the poet created and staged children’s plays and “montages,” penning poems and libretti for songs and children’s operettas. He also edited and contributed to the youth journals of Plast Ukrainian Scouting Organization and the Ukrainian American Youth Association (SUM). In Berlin, Poltava co-founded the Organization of Creators of Literature for Children and Youth (UPLDM), an organization dedicated to publishing children’s works by many Ukrainian authors. His numerous rhyming and illustrated children’s books became the first exposure to reading Ukrainian for many youngsters throughout the worldwide Ukrainian diaspora.

Deeply patriotic, Poltava was an active participant at Ukrainian demonstrations, cultural and political events; as a member of America’s foreign language press, he attended Congressional receptions with Ukrainian community representatives.

Poltava’s protean interests extended to all performing arts, especially theater, opera and cinema. He was engaged by MGM studios in Hollywood as a Russian script editor for the 1956 Yul Brynner film “The Journey.” Poltava composed plays and film scenarios about the Ukrainian Insurgent Army (UPA), the brutal deportation of Ukrainians by Polish authorities in “Operation Wisla,” the Soviet and German occupations and other works related to Ukrainian history, like Shevchenko in exile and “The History of Ukrainian Film 1903-1930.”

His major prose work is “1709,” a novel about Hetman Ivan Mazepa and the historical figures of his era, published in 1961. Poltava’s notable lyric compositions include a collection of poems titled “Ashen Grass” (Bila Trava), in which the poet foresaw in 1964 a future Ukrainian land devastated by nuclear catastrophe. A long poem dedicated to Chornobyl reflected upon the actual catastrophe.

Of special interest is Poltava’s imaginative epic poem “Eneiida Moderna” (Contemporary Aeneid), the author’s “cri de coeur” on behalf of the suffering Ukrainian nation, in which the reincarnation of an ancient monk visits Ukraine at intervals of 300 years, ostensibly to complete painting his icon. But as this monk journeys from city to city, Poltava weaves a gripping and passionate condemnation of Soviet brutality and crime.

Poltava also created librettos for five operas, most notably “Anna Yaroslavna,” about the learned and cultivated princess of Kyiv who married Henry I of France, who ruled France as co-regent while their son Philip was still a child. 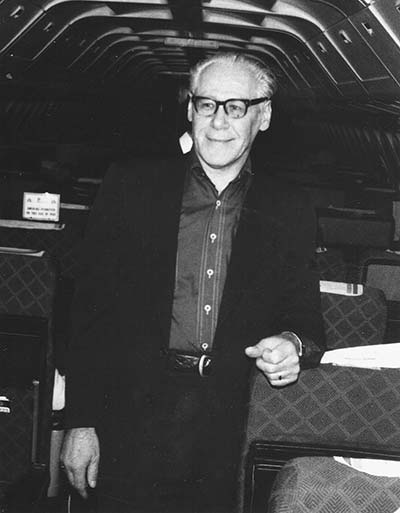 Poltava on an Air Alaska flight in 1980 in route to Alaska to study Ukrainian churches and communities.

In his 60th year, Poltava’s curiosity and explorer spirit sparked his travels through Alaska to discover the remains of 19th century Ukrainian churches and communities. His musings were embodied in his eighth collection of poems, a volume titled “Taste of the Sun” (Smak Sontsia) in 1982.

Poltava’s stepdaughter Daria Dykyj shared with The Ukrainian Weekly how Poltava was engrossed in news from every corner of the world.

“Every experience was mined for themes and content connecting Ukraine. The distance to his on-call Underwood typewriter was short, and a cigarette was always in hand as if connected to the whirring wheels in his mind,” Ms. Dykyj said.

Near the end of his life Poltava lay in bed, uncharacteristically still from illness, his eyes following avidly videos of Germans tearing down the Berlin wall, yet he knew that he would not live to join and report on Ukraine’s long-awaited freedom. He was unaware that Kyiv editors interested in publishing his work were writing him letters of recognition from his homeland, which his wife, Halyna Dykyj, received too late to share with him. She responded by supporting, with Daria Dykyj, the Ukrainian publication of Poltava’s main compositions, as well as depositing his archive in the National Academy of Sciences of Ukraine (NANU) in Kyiv. She also helped support the first staging in Ukraine of his opera “Anna Yaroslavna” (music by Antin Rudnytsky) at the Kyiv National Opera in 1995.

“As familiarity with the creativity of Leonid Poltava recedes on American shores, his works are alive and well in Ukraine, just as he wished,” Daria Dykyj said.