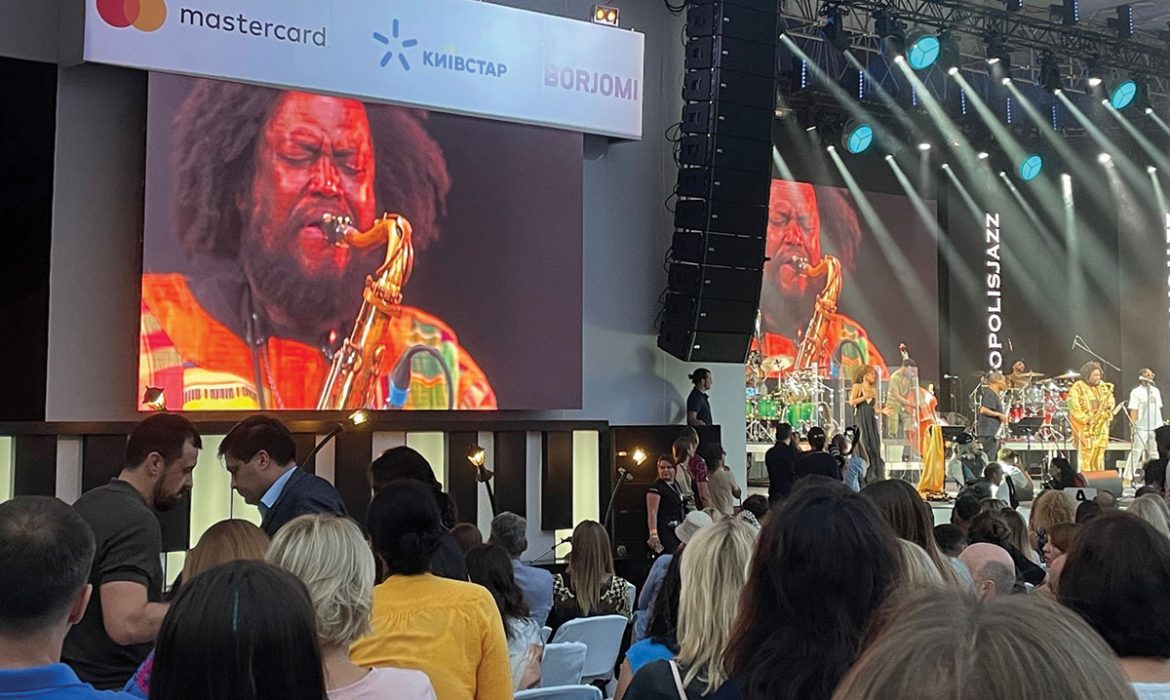 Kamasi Washington, seen on the video screen wearing a full-length, multi-colored Ghanaian dashiki, plays the saxaphone during the Leopolis Jazz Festival in Lviv.

LVIV – In the world of jazz, there are a number of summer festivals that stand out as the most prestigious venues for emerging artists as well as established superstars. For decades, Montreux in Switzerland; Newport, R.I.; and Monterey, Calif., have been recognized as meccas that attract the finest jazz talents from around the world. But unbeknownst to much of the Ukrainian diaspora, Lviv has established itself as an elite stop for jazz aficionados and performers alike.

Established in 2011 by Lviv businessman Mikhail Fridman, the Leopolis Jazz Festival has drawn an impressive array of Grammy winners and internationally renowned recording artists over the past 10 years. These include some of the biggest names in jazz: acclaimed vocalists Bobby McFerrin and Esperanza Spalding, Spyro Gyra, Ron Carter, Bill Evans, Diana Krall, Pat Metheny, and in June of this year, Wynton Marsalis.

Originally, Leopolis was known as “Alfa Jazz,” named after its principal corporate sponsor Alfa Bank. More recently, after acquiring a more diverse group of sponsors, such as Mastercard, Kyiv Star and Borjomi, the festival adopted the more inclusive Latin name for Lviv: Leopolis.

Until recently, this writer was shamefully ignorant of the scope and heft of the Leopolis Festival. In June 2019, during a visit to the Ukrainian Catholic University, colleagues presented him with a very touching birthday gift – tickets for three nights of the festival, though there was no indication of the caliber of music one might expect.

During years in college and law school, this writer was spoiled after attending incredible live performances by some of the giants of blues and jazz: keyboard master Keith Jarrett, saxophonist Gato Barbieri and guitarist Albert Collins. B.B. King performed a live concert on campus on the eve of college graduation.

As much as this thoughtful gift was appreciated, a thought did cross a snobbish mind: “What caliber of music could one expect from some amateur quartets from Kyiv or Warsaw that I had never heard of before?” To put it mildly, one could expect to be somewhat underwhelmed.

But spectacular concerts awaited. The first night brought modern fusion and funk group “Snarky Puppy.” Despite the bizarre stage name, Snarky has now won four Grammys, and has played to a sold-out crowd at Royal Albert Hall in London. Led by bassist Michael League, the group spent several years languishing in relative obscurity in Texas. Much like the Leopolis Festival itself, Snarky Puppy was one of jazz’s best kept secrets.

But since relocating to Brooklyn, N.Y., Snarky Puppy has exploded on the jazz scene, dazzling audiences with its reckless virtuosity and explosive instrumental riffs, winning a 2021 Grammy for Best Contemporary Instrumental Album.

After such a glorious introduction to Leopolis on the first night, one could hardly wait to hear a headliner of the festival – the acclaimed pianist and sultry Canadian chanteuse Diana Krall. Besides her solo albums, televised concerts and numerous Grammy Awards, Ms. Krall is known for her collaborations with fellow superstars Tony Bennett and Elton John. 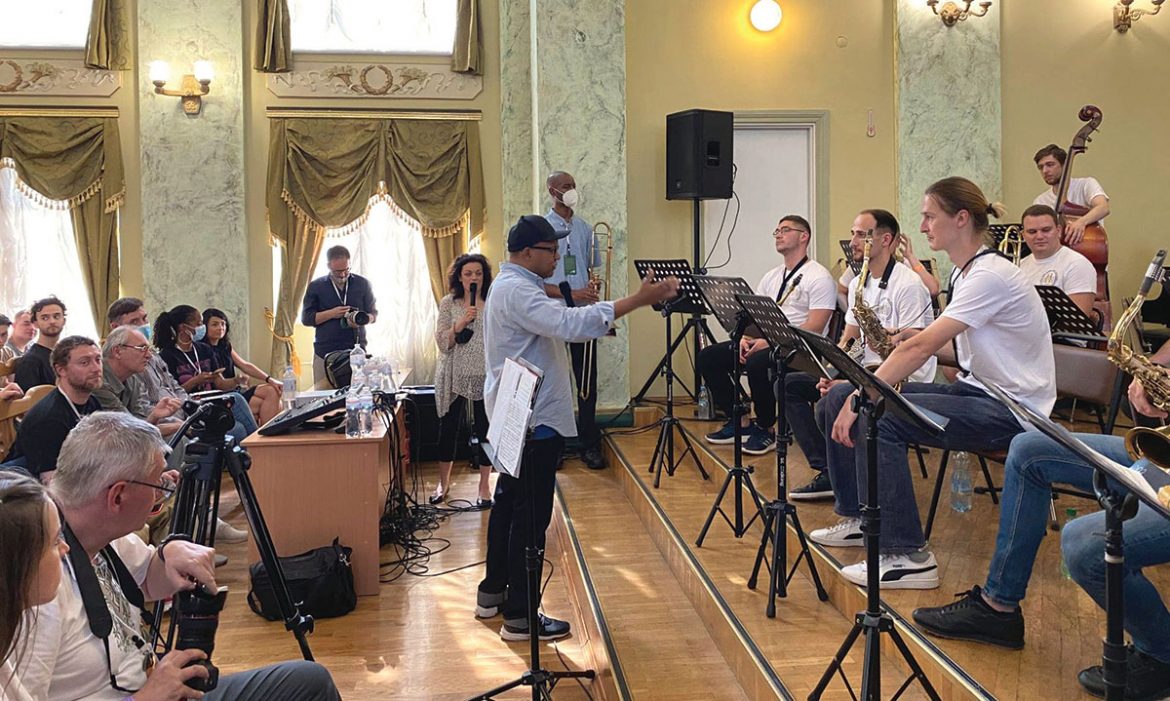 Wynton Marsalis (center) works with musicians during a master class with students at the Lviv Music Institute.

The most memorable performance at the 2019 festival came on the final night when UCU hosted a delegation of VIPs from the University of Notre Dame. This writer had the privilege of attending one of the final concerts of legendary pianist and composer Chick Corea, who passed away in 2020. It was Mr. Corea’s second performance at the Leopolis Festival. Like a growing number of artists from North America, he was enchanted by the beauty and convenience of the city, the professionalism of the festival organizers and the warm audience response.

The experience of seeing Chick Corea perform live in Lviv was blissfully surreal: as an aspiring pianist in his teenage years, this writer attended concerts by several world-class virtuosi, including Andre Watts and Artur Rubinstein. But he never would have imagined that the only time he would see Mr. Corea performing live would be at a world-class festival in an independent Ukraine.

After a generous display of his signature Latin rhythms and gorgeous, innovative harmonies, the concert ended with Mr. Corea performing his best-known work – Return to Forever. It brought the audience to its feet, crying out in adulation.

Fast forward to 2021. After the cancellation of the festival due to the COVID-19 lockdown in 2020, Ukrainian and European audiences were hungry for a return to live music.

Featuring a diverse and powerful musical lineup, the Leopolis Festival in 2021 did not disappoint. Capturing the Zeitgeist of a fragile world community just recovering from a brutal pandemic, there were soulful and contemplative performances by the Avishai Cohen Trio from Israel and Kathrine Windfeld of Denmark. But for those with a taste for more gritty styles, the festival provided plenty of joyful noise and rousing anthems that became a kind of celebration of human resiliency and a return to life as we remembered it before the pandemic.

For many concert goers, one of the biggest highlights this year was an appearance by British singer-songwriter SEAL (Henry Olusegun Adeola Samuel), who is known worldwide for his hit songs “Kiss from a Rose” and “Stand by me.” Seal began the concert with a fine rendition of jazz standards popularized by Frank Sinatra, including “Luck be a Lady,” “When I was Seventeen” and “My Funny Valentine.” He launched into a set of new songs that brought the audience to its feet.

Unfortunately, this writer was unable to attend the concert by Wynton Marsalis, the world-renowned trumpeter, American goodwill ambassador and artistic director of Jazz at Lincoln Center. In addition to his performance on the main stage at the Leopolis Festival, Mr. Marsalis gave a master class to students at the Lviv National Academy of Music.
The continuing success of the Leopolis Jazz Festival attests to the reawakening of Lviv as a cosmopolitan city and an increasingly popular tourist destination. It also underscores some aspects of Ukrainian cultural life and economic health that are seldom recognized:
First, that so many international stars are eager to perform in Lviv and to return to Leopolis shows that Ukraine is no parochial backwater.

Second, Lviv has now developed sufficient infrastructure in marketing, corporate backing and hospitality that the city can not only accommodate but impress world-class artists.

Third, Ukraine is now growing a business elite and a comfortable middle class that can afford to attend fashionable cultural events and provide a successful market for international artists. The organizers of the festival have done an outstanding job of making it accessible to different income tiers of jazz lovers. They have provided a “Fan Zone” in the Bohdan Khmelnytsky Cultural Park where people can watch the live concert on a giant Jumbotron – reminiscent of outdoor concert settings at Tanglewood or the Wolf Trap. Wealthier patrons that can afford higher-priced tickets can see the performers live on the Eddie Rosner Stage, or in the Pototski Palace Square. And those that enjoy a more intimate outdoor setting can watch smaller ensembles perform in Lviv’s downtown Rynok Square.

Fourth, although Ukrainians are deeply patriotic, they are also culturally diverse, open to new art forms, and eclectic in their tastes. In keeping with Taras Shevchenko’s adage “і чужого научайтесь,” the success of the Leopolis Festival has shown that at their core, Ukrainians are neither chauvinistic nor reactionary, but deeply pluralistic and welcoming of people of other nations and races.

This was underscored during the June 25 performance by the Los Angeles-based ensemble of Kamasi Washington. This is a band with two percussion sessions and a big sound “straight out of Compton,” full of soaring, triumphant brass riffs that combined the raw urban mysticism of John Coltrane and Miles Davis with the elegance of Earth, Wind and Fire. Mr. Washington told the audience that because of the COVID-19 pandemic, Leopolis provided his ensemble with its first opportunity for a live performance in over 18 months.

Flanked by his trumpet and saxophone soloists wearing distinctive Ukrainian embroidered shirts, Mr. Washington – an imposing, heavy-set man with a billowing afro and full-length beard – was dressed in a full-length, multi-colored Ghanaian dashiki.
Looking out into the enthusiastic audience, eyes glittering with emotion, Mr. Washington declared:

The audience let out a roar of approval and gratitude.

The Leopolis Festival offers fresh evidence that despite all the challenges it faces, Ukraine is emerging as a cultural mecca and a mature society that has embraced the legacy of the Revolution of Dignity and has untapped potential for further economic and cultural growth.