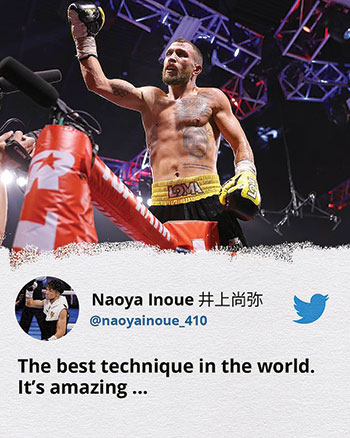 Lightweight Vasyl Lomachenko celebrates his victory against Masayoshi Nakatani of Japan on June 26 in Las Vegas.

SOUTH WINDSOR, Conn. – Vasyl Lomachenko returned from a painful loss, aiming to get back on track with a fight against Masayoshi Nakatani on June 26 in Las Vegas.

Nine months ago Lomachenko lost his lightweight gold to Teofimo Lopez of the U.S.A., whose clear decision win relieved ‘Loma’ of his WBA (Super) and WBO titles. In the aftermath, Lomachenko blamed defeat on an injured shoulder, but, without a rematch clause, the 33-year-old Ukrainian found himself at the back of the line in an attempt to secure a second bout with Lopez.

Before that unfortunate reversal, Lomachenko was well on his way to greatness. A double Olympic gold medalist and a three-weight world champion as a professional, he cut a swath through the weight classes, forcing many opponents to retire after being totally outclassed. Since a loss to Orlando Salido (41-12-2, 29 KO) of Mexico in 2014, Lomachenko had a streak of 13 consecutive victories before the Lopez setback.

Tokyo-based Masayoshi Nakatani was thought to be a good yardstick for Loma, with the Japanese’s sole loss also coming at the hands of the aforementioned Lopez in 2019. Heading into their fight, Lomachenko was the betting favorite, with most experts concluding that an impressive victory by “High-Tech” would put him right back in the mix at lightweight, and perhaps even earn him another shot at Lopez later this year.

Lomachenko did not officially return to any lightweight throne after his masterful performance in a ninth-round TKO of Nakatani (19-2, 13 KO), but he certainly looked like a lightweight king. In his first appearance since the Lopez loss, Lomachenko (15-2, 11 KO) reasserted himself as one of the best 135-pounders in the world.

“I’m happy because I won,” Lomachenko said in a post-fight interview on ESPN+. “All the strategies that we developed with my team (worked). I reached all my goals. I won, and now I’m back on track.”

The ending came at 1:48 seconds of the ninth round when referee Celestino Ruiz intervened during a prolonged flurry in the middle of the ring. Nakatani, who had survived an earlier knockdown in the fifth round, was pretty much out cold on his feet. He tried to tie Lomachenko up to stop the onslaught, but Lomachenko consistently created space and landed punches at will.

The victory earned Loma the right to a potential rematch with Lopez (16-0, 12 KO). Lopez’s father was in attendance at the Lomachenko-Nakatani fight, and was quickly escorted away by security after approaching Lomachenko’s corner after the bout. Lopez is scheduled to fight George Kambosos, Jr., (19-0, 10 KO) of Australia on August 14. A Lomachenko-Lopez rematch could be on the horizon as early as this December.

Lomachenko was aggressive from the opening bell in front of a sellout crowd of 2,072 inside The Theater at Virgin Hotel. His defense was impeccable, consistently working to the inside of his much taller and rangier opponent. Lomachenko’s only adversity came in the initial round when he suffered a cut following an accidental head-butt. The cut bled throughout the fight, but did not slow down the Ukrainian. His left hand caused Nakatani major problems and he was not bothered by Nakatani’s physicality in the clinch.

The first knockdown occurred in the last seconds of round five, thanks to a powerful left hand. As Nakatani tried to tie him up, Lomachenko landed a short left and followed with a lightning-quick right hand from a short distance. In addition to dominating a most worthy opponent, Lomachenko made a statement by finishing his Japanese challenger, something Lopez did not do when he fought him in July 2019. Lopez won that fight in a convincing decision, although the bout was competitive. Lomachenko purposely chose Nakatani as his next opponent for that reason.