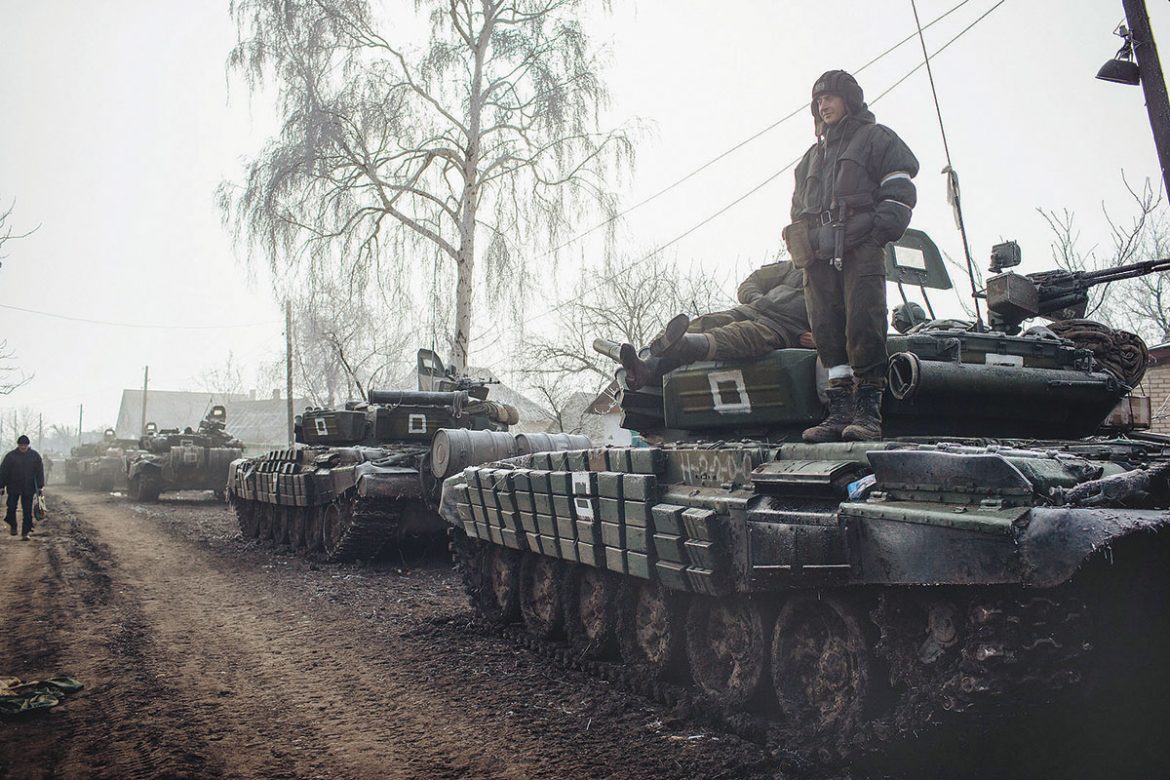 A column of Russian tanks near the Donetsk Oblast town of Debaltseve on February 18, 2015.

KYIV – Four years and one month ago, the second of two major and decisive battles took place in the Donbas war. In the Battle of Debaltseve in Donetsk Oblast, Ukraine’s army tested itself against regular and irregular units of the Russian military, including battle-hardened mercenaries from the Wagner private military outfit.

As in the August 2014 Battle of Ilovaisk, Kyiv was overwhelmed by a superior foe that broke through thin defensive lines with a heavy concentration of forces and modern weaponry. In the end, more than nine towns and territory were lost in a pocket of land that was sandwiched between Russian-occupied Horlivka to the west and Alchevsk to the east.

Ukraine’s armed forces general staff, in an analysis of the battle published on February 3, 2016, said that 136 personnel were killed and 331 wounded during clashes on January 27-February 18, 2015.

The casualty figures don’t include volunteer forces – namely the Donbas Battalion. Total Ukrainian losses were 300 dead and 700 wounded, according to a report authored by Maj. Amos Fox of the U.S. Army Fort Benning on September 14, 2016.

“The battle for control of Debaltseve destroyed the 128th Mechanized Brigade and the Donbas Battalion as fighting formations,” the U.S. Army reported concluded. “The Russian and separatist losses are far more difficult to define as Russia continues to deny any involvement in the battle.”

Prelude and backdrop of battle

Russian-led forces had repeatedly flouted the first Donbas war truce that was brokered in Minsk in September 2014 following the disastrous Ilovaisk battle. Fighting escalated in the fall and winter of that year and reached a crescendo in January 2015 as clashes persisted for the Donetsk Airport, in the Debaltseve bulge and around Shyrokyne, 30 kilometers east of the Azov Sea coastal city of Mariupol.

This included the area around Debaltseve, a city that had a pre-war population of 25,000. It was considered strategic to both sides, because it sits on the “nexus of multiple highway and railroad lines that are critically important,” read the U.S. Army report.

However, this part is “overstated,” former British Lt. Col. Glen Grant, a defense reform expert at the Ukrainian Institute for the Future, told The Ukrainian Weekly on February 27.

Because this swath of territory is what the British expert called a “northern pincer sticking into Russian territory,” Russia decided to take it over as a “bonus opportunity,” he said.

It made no sense for Ukrainian forces to hold the pocket unless it was going to use it as a “ram to re-take more territory” or “heavily fortify it to make it impregnable,” said Mr. Grant, who also is a senior fellow at the U.K. Institute for Statecraft.

Adhering to the first Minsk ceasefire of September 19, 2014, made defending the Debaltseve bulge “untenable” and “gave the enemy an advantage to conduct offensive operations simultaneously in three directions,” the Ukrainian military analysis stated.

Thus, fighting continued. Kyiv withdrew from the Donetsk airport in the second half of January 2015 “because there was nothing left to defend,” as National Security and Defense Council Secretary Oleksandr Turchynov said then.

But the further loss of territory forced Ukraine’s President Petro Poroshenko back to the negotiating table in Minsk on February 11, 2015, to meet with his Russian counterpart Vladimir Putin, then-French President Francois Hollande and German Chancellor Angela Merkel as mediators.

Russian-led forces first advanced on the west flank of the Debaltseve pocket in late January 2015, targeting the town of Vuhlehirsk, a railroad hub.

U.S. estimates put the concentration of Russian forces in the Debaltseve area at 9,000 “conventional and unconventional troops… this number doesn’t include the cooperation of separatists, partisans and other proxy forces.”

Although “pound for pound” Ukrainian soldiers had a “value of three to one against the Russians,” Mr. Grant said, “they [Russian-led forces] had more numbers, more organization, more equipment and more rockets.” 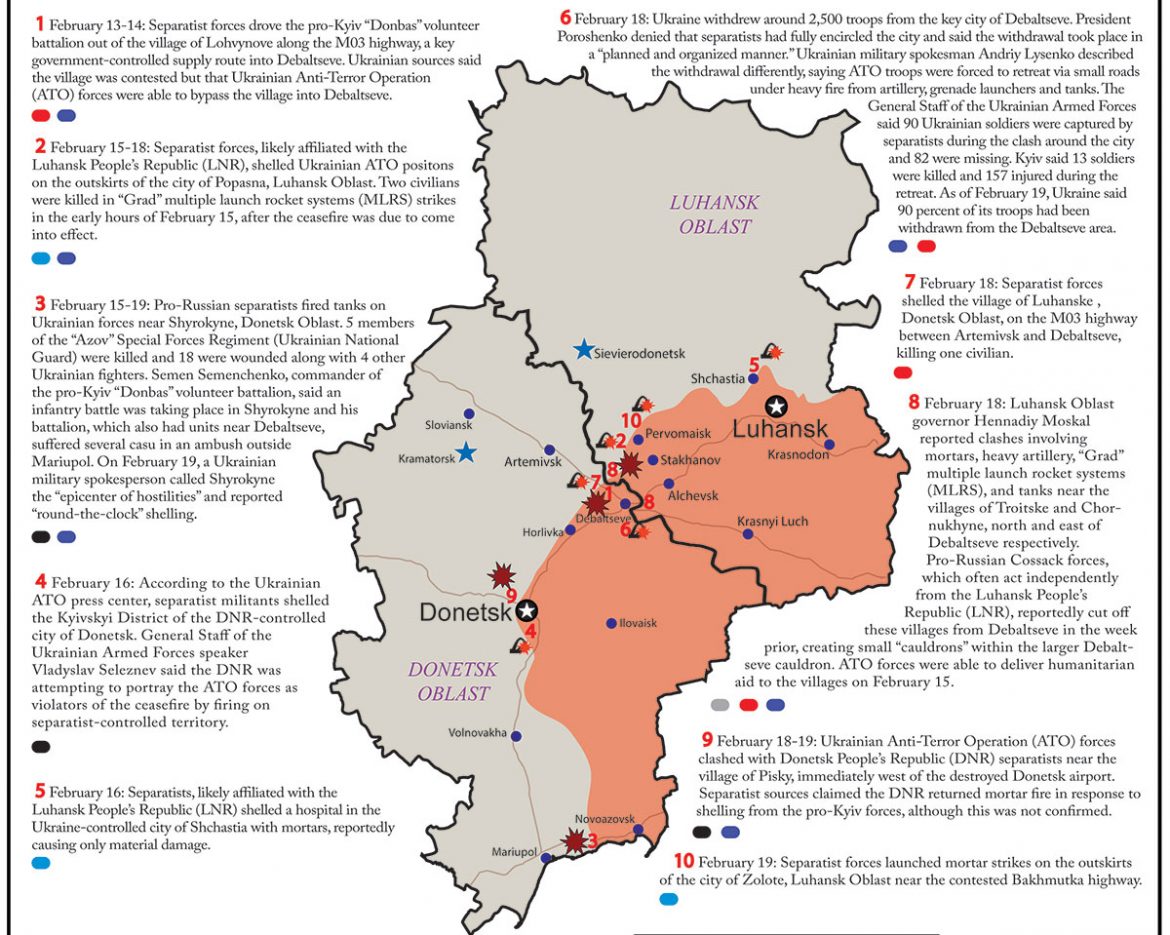 Graphic by the U.S.-based think tank Institute for the Study of War shows the situation in the area of Debaltseve on February 13-19, 2015.

One by one, towns fell as Kyiv saw its forces being gradually encircled in the pocket. By January 30, 2015, Vuhlehirsk fell in conditions of blowing snow and frigid winter. By February 9, 2016, the town of Lohvyne was taken over along the M03 highway that linked Ukrainian troops with their headquarters and logistics base in Bakhmut to the northwest.

Kremlin-led forces had successfully pinched off the bulge three days before the second Donbas war truce was signed in the Belarusian capital. Ukraine’s analysis stated that any interim ceasefire that was agreed upon during talks in Minsk let Russia to amass more forces in the Debaltseve area.

The U.S. military described Russia’s operational approach as vacillating “between a strategy of attrition and exhaustion.”

The strategy focused on “trapping Ukrainian ground forces and slowly bludgeoning them through the repetitious employment of indirect fire and armored thrusts,” according to Maj. Fox. As Russian-led forces closed in on Debaltseve itself, “the attack quickly took the form of a siege… to inflict a high cost on the Ukrainian army and the civilian population…in pursuit of the city.”

By the end of fighting on February 18, 2015, 8,000 civilians had fled the city and another 6,000 were killed, according to the United Nations Office for the Coordination of Humanitarian Affairs.

After Vuhlehirsk and before Lohvyne fell, the village of Ridkodub and Nikyshyne fell in the southern end of the pocket in early February 2015. Efforts to retake the fallen towns and villages failed.

“The overall situation was extremely acute,” the Ukrainian analysis read.

Moscow-led forces achieved “a high level of synergy” during the fighting, the American military report stated. Coordination illustrated the “Russian predilection for employing drones, Spetsnaz [special forces], GRU [military intelligence] and partisan forces in conjunction with one another for reconnaissance to support the battalion tactical group and army headquarters at the Southern Military District [in Russia’s Rostov-on-Don].”

Fighting also revealed Ukraine’s inferiority at the tactical level and slow reaction to on-the-ground realities because of poor communication with the high command.

Another mistake, according to British expert Mr. Grant, was Ukraine’s tendency to “concentrate forces” in response to Russian attacks.

Thus, with the so-called “road of life” cut off for Ukrainian soldiers, the military started to prepare a withdrawal from Debaltseve on February 14, 2015, two days after the Minsk II ceasefire was signed – it was supposed to take effect on February 15.

The eastern flank of the pocket collapsed by February 16 near the towns of Luhanske and Chornuhyne.

Despite the truce, Moscow kept advancing on the surrounded city before finally taking it over on February 20, 2015, in clear violation of the second truce.

Seeing the futility of trying to hold Debaltseve, Kyiv launched small-scale breakouts from the encirclement starting on February 13, 2015. Ukraine’s analyses maintains that it was organized and planned, which led to only to 110 killed and 270 wounded.

Kyiv inflicted “heavy casualties” on Russian-led forces which stopped them advancing further once the Debaltseve pocket was taken, the Ukrainian analysis read.

“By the night of February 18, 2015, about 2,500 Ukrainian troops had withdrawn from Debaltseve, leaving about 4,500 soldiers still in and around the city,” Maj. Fox wrote.

Unlike the Ukrainian analysis, the U.S. major’s report noted that “Ukrainian forces were forced to flee from the roads, abandon their vehicles and make for safety on foot… In the process, Russian forces destroyed innumerable Ukrainian combat vehicles and captured close to 100 Ukrainian soldiers.”

Russia continues using the Donbas war as a testing ground for fresh troops, new weapons and operational strategies, Mr. Grant said. For example, Moscow deployed a modernized T-72 tank that has the fighting capability of its latest T-90 tank, which was also seen in the Debaltseve battle.

Russia used horizontal command mechanisms by eliminating “divisions and aligned its expeditionary capability in its brigades and regiments…with the battalion tactical group” as the “physical embodiment of this adjustment,” Maj. Fox wrote.

Ukraine, on the other hand, still relies on a stationary command post in the rear that is removed from on-the-ground field commanders.

Since the battle, Ukraine has somewhat improved in other areas, Mr. Grant said. “Yes, the brigade commanders are better… but overall it is a Soviet army that tends to look modernized,” he added.

The fact that the Ukrainian military deemed Debaltseve a success is at the crux of the matter, Yuriy Butusov, a war correspondent and chief editor of Censor.net, told The Ukrainian Weekly.

“The [military] Leadership didn’t know what was going on; there wasn’t enough objective information about the enemy and of our own capability,” he said. “Logic dictates that if we gave up space, if we gave up territory, then we lost.”

As of today, 7.2 percent of Ukraine’s territory, including Crimea, is under Russian control. More than 10,300 people have been killed in the war and 1.5 million more internally displaced.

The size of the Russia-controlled territory is 16,700 square kilometers – larger than the country of Montenegro or state of Connecticut, according to the U.S. State Department’s Bureau of Conflict and Stabilization Operations.