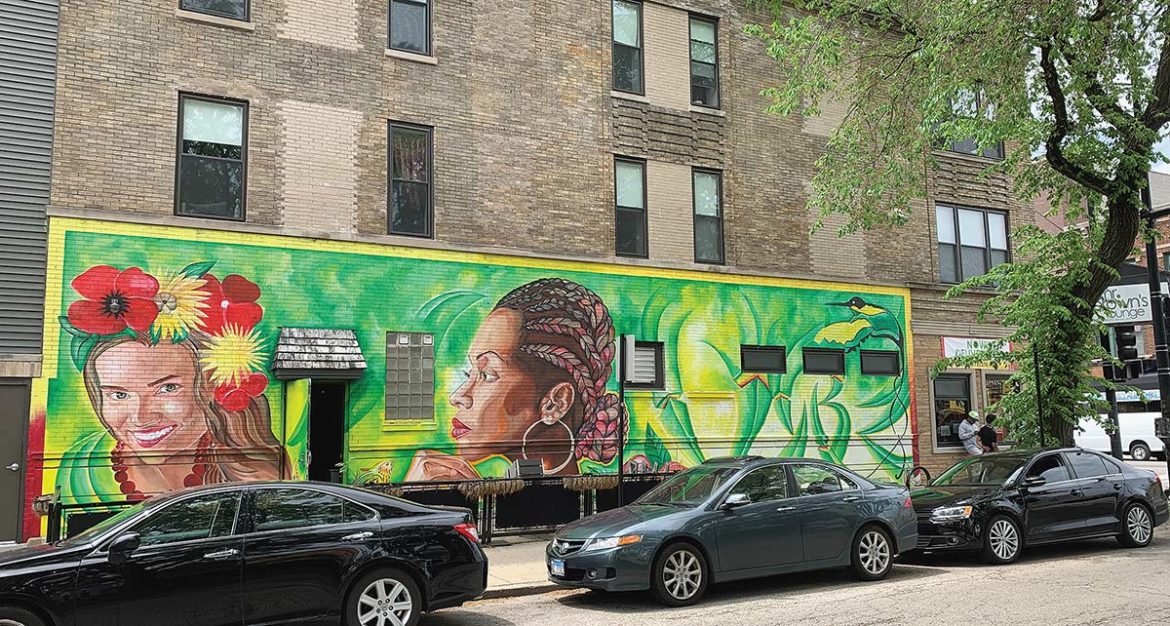 A mural depicting two women – an African American and a Ukrainian – is featured on the side of Mr. Brown’s restaurant and lounge, one of two black-owned businesses in the Ukrainian Village neighborhood of Chicago.

CHICAGO – The looting that accompanied protests over the death of a black suspect while in police custody in Minnesota spilled over to the Ukrainian Village neighborhood in Chicago on May 31-June 1. 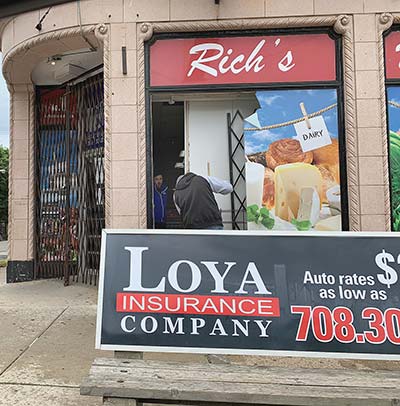 Rich’s Deli, a Polish-owned establishment, was looted on the evening of May 31 amid protests over the death of George Floyd, an African American who died in police custody in Minnesota earlier in May.

The establishments that were looted all sold liquor, except for a cell phone store and gas station that was struck two consecutive days. Two businesses – a fresh fruit and vegetables grocery and a liquor store – remained shuttered as of June 4. Those businesses were not owned by Ukrainians, but a Polish-owned deli that reopened employs Ukrainians, who also make up a large portion of the clientele.

Vandalism was seen at one condominium unit in the neighborhood and no injuries were reported.

Ukrainian American Myron Lewyckyj, the owner of the Tryzub Ukrainian restaurant, said the people who were “doing the looting were not acting out against racism, discrimination or police brutality – they were just opportunists.”

He noted that the places broken into were establishments where looters “could get the most goods… and liquor is a big draw.” 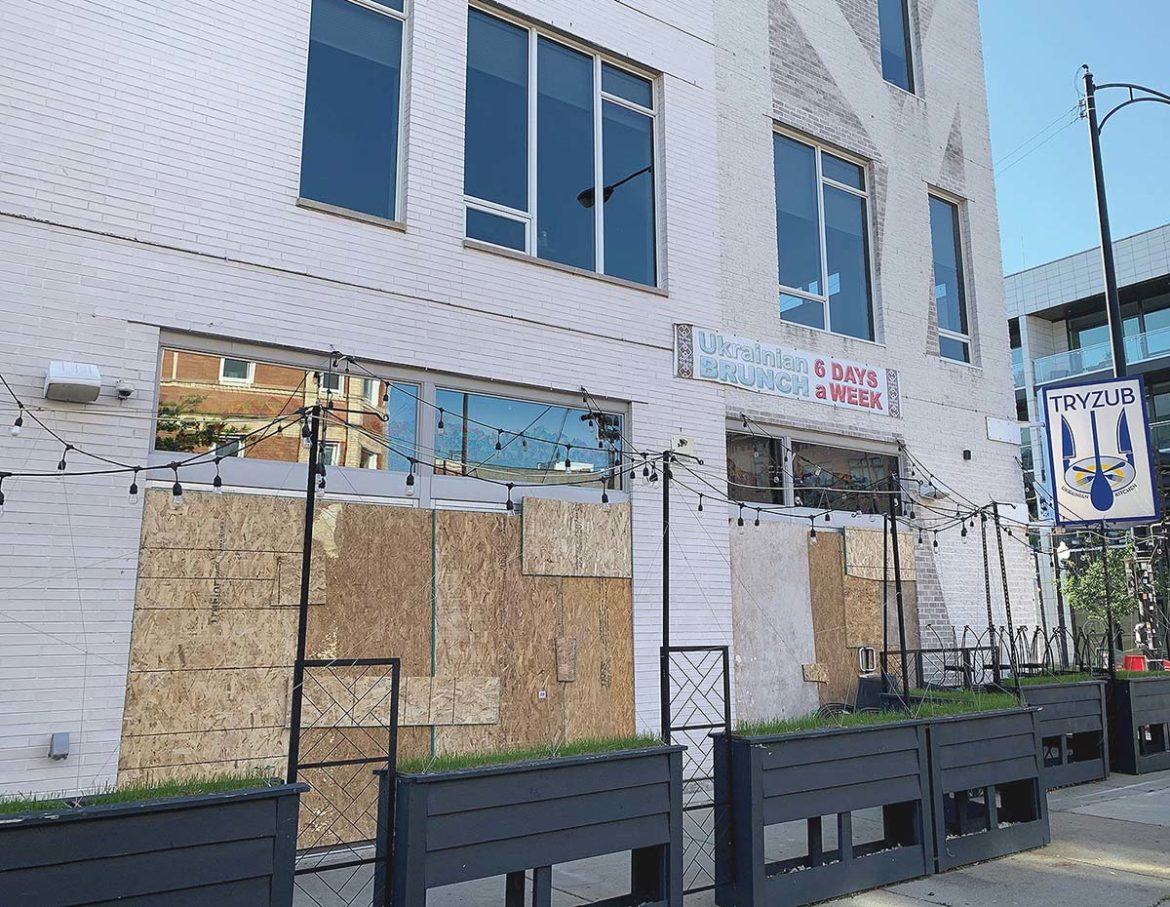 The Tryzub Ukrainian restaurant was boarded up on June 1 in anticipation of more looting and planned protests later in the week along Chicago Avenue in the Ukrainian Village of Chicago.

Tryzub was boarded up on June 1 as a precaution and in anticipation of a protest the following day along Chicago Avenue, the neighborhood’s main thoroughfare.

The Chicago home office and the Chicago Northwest branch of the Selfreliance Federal Credit Union sent people home early twice during the week out of safety concerns and to allow them to obey the 9 p.m. curfew that Mayor Lori Lightfoot imposed, which remained in effect as of June 3.

Protests and looting had erupted throughout the city and suburbs over the killing of George Floyd by a white police officer who pinned his neck under a knee for nearly nine minutes in Minneapolis on May 25. 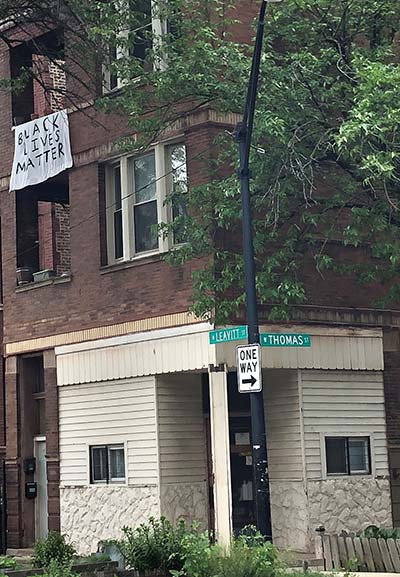 A banner hangs on a residential balcony on the corner of Thomas and Leavitt streets in the Ukrainian Village of Chicago.

Regarding the looting, a June 1 internal intelligence assessment of the protests by U.S. Department of Homeland Security officials said most of the violence appears to have been driven by opportunists, Reuters reported.

Chicago Police Superintendent David Brown said 240 people were arrested for looting and other violations during the first night of protests on May 31.

It was the first time the National Guard was deployed in Chicago to perform civil disturbance duties since the 1968 Democratic Convention, Lt.-Col. Brad Leighton of the Illinois National Guard told The Ukrainian Weekly.

Mayor Lightfoot praised the mostly peaceful protests, which persisted on June 3, and characterized the violence and destruction as “disgusting.”

This week she announced directives to reform the city’s police force within 90 days.

In a rare prime-time address on June 2, the mayor said her “heart is broken over what has happened here in the city that I love.” She mentioned the death in Chicago of 17-year-old Laquan McDonald in 2014 when police shot the unarmed teenager 16 times and after which the police chief was fired.

The police reforms Ms. Lightfoot announced will include new police training “that incorporates citizen involvement,” according to WBEZ, the local public radio station.

The Illinois Division of the Ukrainian Congress Committee of America (UCCA) issued a statement in support of the mayor’s position to protect neighborhoods.

“At this time, with our nation and our city on edge… challenged by unemployment and economic uncertainty, and the growing awareness of the systemic injustice that inflicts unequal punishment on communities of color resulting in the current street protests, the Ukrainian Congress Committee of America Illinois Division expresses its support for the steps taken by Chicago’s Mayor Lori Lightfoot and the Chicago Police Department to provide a sense of security and responsibility for our communities,” the organization’s vice-president, Marta Farion, said on Facebook on June 2.

She described the looters as “hired thugs.”

“I condemn, first of all, how the African American man died in a horrific way and condemn bigotry that destroys America, including acts of violence that destroy our society because we live here, this our home,” Ms. Farion said.

She cited the gentrification process that the Ukrainian neighborhood went through over the past 20 to 30 years, observing that black families have moved in and two black businesses are operating – a sign of the changing demographics.

“Generally speaking, our Ukrainian Village is close to downtown and it is in much better shape… it has been voted as a neighborhood with the highest real estate prices,” Ms. Farion said.

“Martin Luther King once stated,” Rep. Davis said, “‘Injustice anywhere is a threat to justice everywhere.’ African American men want and demand the exact same pathway for fair and just treatment as any other American taxpayer.” 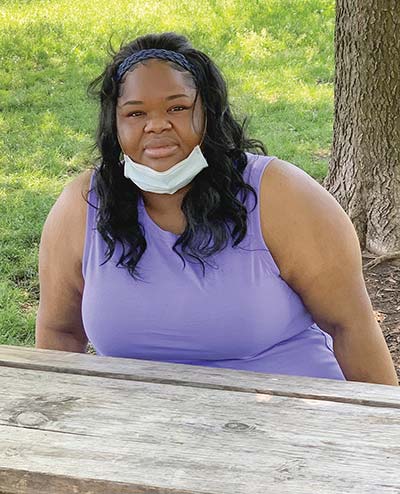 Tacarra Birmingham, an activist and community development and food programs consultant, is seated at Smith Park near the Ukrainian Village neighborhood of Chicago on June 2.

Racism runs deep in Chicago, according to activist and community development consultant Tacarra Birmingham. A former employee at the U.S. Department of Agriculture, she said the racism is fueled by “segregation through divided neighborhoods, by class and income inequality.”

Ms. Birmingham added that she “doesn’t feel safe anywhere I go,” noting that she was once called a “big crazy black bitch” by a police officer.

Once, while attending a festival in the neighborhood, she felt that “people look at you like you don’t belong here… they behave like it’s their festival and that I’m unwelcome.”

Ms. Farion of the UCCA said, “considering our own history of discrimination and being treated as second-class citizens by Russia and then the Soviet Union, we should be sensitive to bigotry and discrimination.”

She said the Ukrainian community should “push for equal rights and equal treatment of all citizens.”

Meanwhile, the front glass door of the Ukrainian Institute of Modern Art remains boarded up and Mr. Lewyckyj said he has plans to reopen his restaurant only “once the coast is clear.” 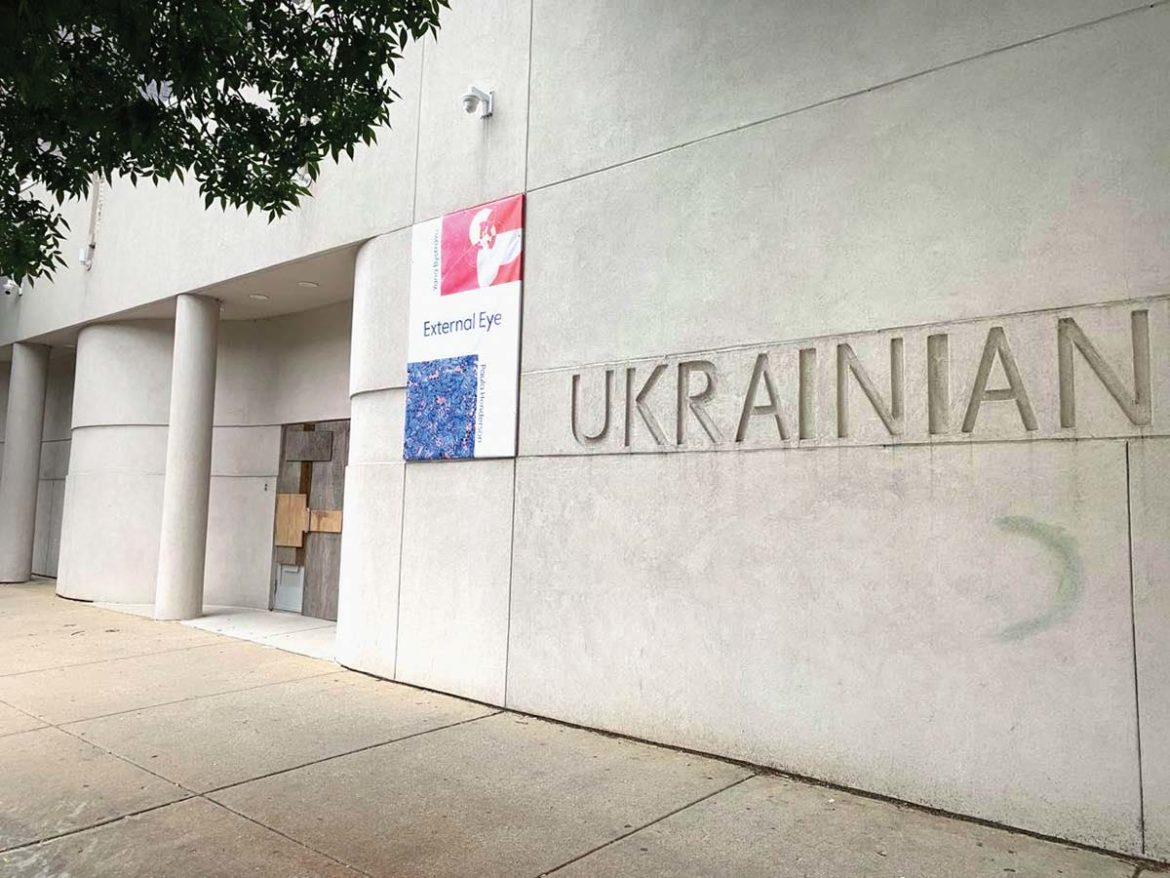 The boarded-up entrance to the Ukrainian Institute of Modern Art in Chicago’s Ukrainian Village.