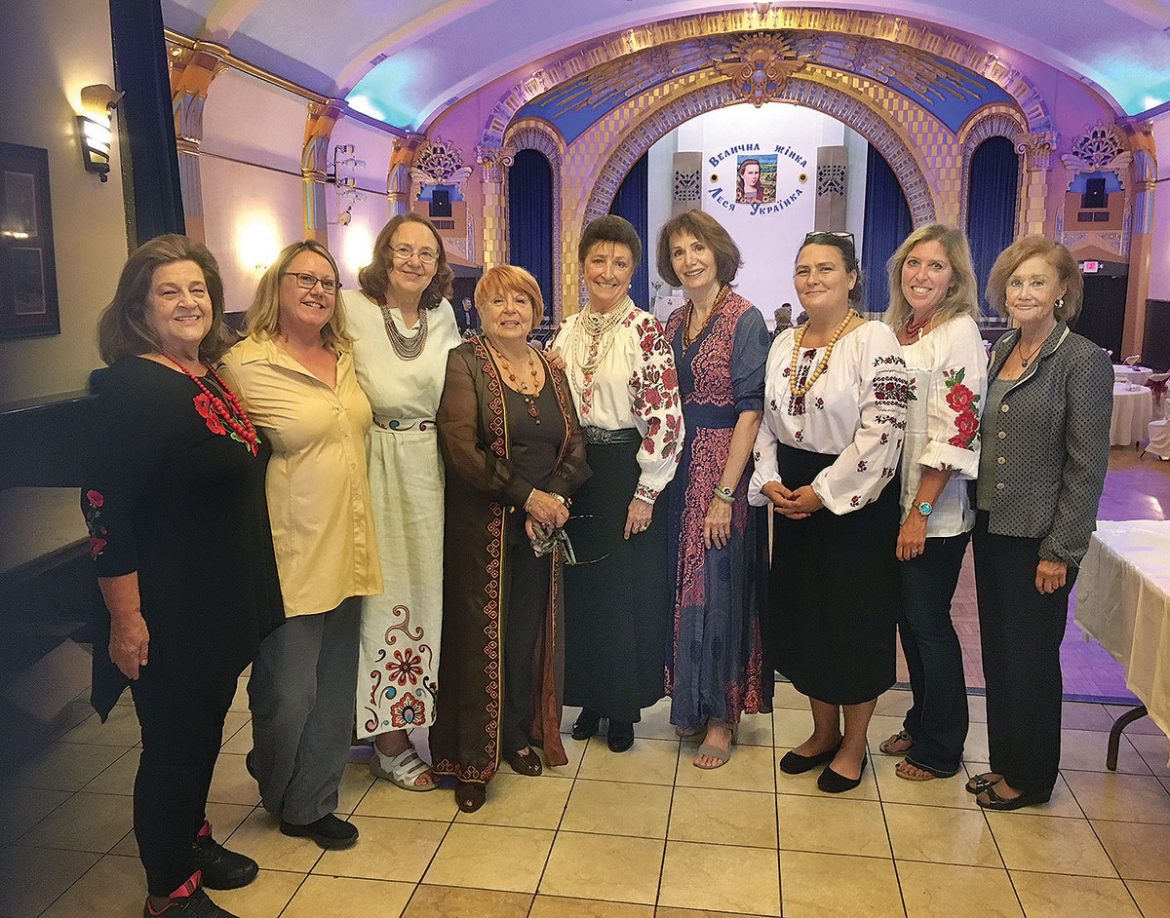 The play was written in Ukrainian by the artistic director, Victoria Kuzina, and translated into English by Luba Keske, who also served as the English-language narrator. Asya Gorska, who partnered with Ms. Kuzina on the creative elements of the play, narrated in Ukrainian.

That Sunday afternoon, arriving guests were treated to “high tea” consisting of flavorful teas and coffee, savory canapes and delicious home baked scones and other delectable sweets. When everyone had settled in, the president of the Ukrainian Art Center, Daria Chaikovsky, briefly greeted Ukrainian and American guests to the center’s first major stage production dedicated to Lesia Ukrainka, the foremost woman writer in Ukrainian literature.

Born Larysa Kosach on February 25, 1871, in the Volyn region of Ukraine, she was the oldest of six children born to well-off intellectuals. Because the schools were Russified, Lesia and her siblings were home-schooled by their mother, Olena Pchilka, a writer in her own right.

The play, starring Halyna Stadnyk as Lesia Ukrainka, presented the life of this majestic woman through narration, poetry, music, interpretative dance and film. Integrating these media, the writer wove the story of Ukrainka’s life as a gifted writer of poems, prose, short stories and music, and as a linguist and translator of classics into her native Ukrainian language. At age 12, Lesia was struck by a devastating illness – tuberculosis of the bone – that eventually spread throughout her body and took her life when she was only 43 years old. Despite this debilitating disease, her spirit was unstoppable, and her endearing Ukrainian heart and soul longed for freedom for her people and native land. She continued to write and in 1912, even at the height of her illness and burning with fever, she wrote the drama “Lisova Pisnia” (“Forest Song”), one of her most famous works.

Ukrainka travelled to distant lands – Crimea, the Caucasus, Germany, Italy and Egypt – seeking a cure for her painful illness. Sadly, she did not find a cure, but she did find love.

As the curtain opened to lovely background music and the lights dimmed, Ms. Gorska walked onto the stage, picked up the Holy Bible from Lesia’s writing table and read: “Then when our dying bodies have been transformed into bodies that will never die, this Scripture shall be fulfilled: ‘Death is swallowed up in victory, o grave, where is your victory? O death, where is your sting?’ ” 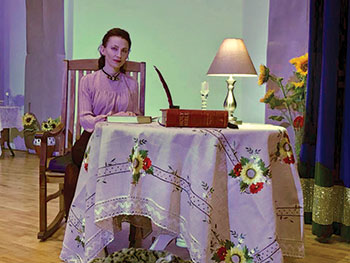 The narrator then related: These same words from the Holy Bible remind us of Lesia Ukrainka. They give meaning to her enduring creative personality. Larysa Kosach …entered into Ukraine’s and the world’s literary sphere under the beautiful pseudonym, Lesia Ukrainka, …whose words are eternal and whose enduring spirit was victorious over death.

The stage went dark and a spotlight appeared on Ukrainka, brilliantly portrayed by Ms. Stadnyk, who walked toward the front of the stage, looked out into the audience, and not really seeing them, spoke:

If all of my blood would flow as these words,
If all my life would disappear unnoticed, like the disappearance of the evening’s light…
Who charged me to be the guardian among the ruins and sadness!
Who put upon me the responsibility to awaken the dead,
To bring joy to the living with a kaleidoscope of happiness and sadness?
Who put pride into my heart?
Who gave me the double-edged sword?
Who called – take the saintly oriflamme –
Songs and dreams and unbending thoughts?
Who ordered me not to abandon my weapon?
Not to retreat, not to fall, not to be weary?
Why must I obey these orders?
Why cannot I run away from the field of honor,
Or fall on my own sword?
What does not allow me to speak frankly:
“Yes, fate, you are stronger, I surrender.”
But, why at the mention of these humble words,
Does my hand clutch an invisible weapon… and my heart hear echoes of war?

The story of the writer’s life continued on the screen, as the audience watched the documentary film “Lesia Ukrainka” directed by B. Holen. The conclusion of the film led viewers back to the stage, where Lesia describes her childhood as never complaining about pain because she was a proud girl.

The narrator notes that Lesia’s illness made her sensitive to the suffering of others. She saw and felt the injustice and lack of freedom in her native land, and she longed for change. She yearned to break free of Moscow’s chains. But how could an ill and crippled girl reach these leaders ensconced in a high tower, or even take a weapon into her hands? Lesia found another road – her words became her sword.

As the lights slowly dimmed, 12-year-old Margaryta Kuzina walked onto the semi-lit stage and sang “The Evening Hour,” beautifully set to music by V. Vorobey.

As the last note of the song faded, Ms. Gorska and Ms. Keske walked on stage and continued the narration of Lesia’s life in both languages. They noted that Ukrainka’s stirring poems, which have been translated into many foreign languages, carry love and hope and embolden humanity to be strong and spiritual individuals. One such poem, “Contra Spem Spero” (“Hope Against Hope”), was recited on stage in English by Leslie Ro, a student from the University of California, Los Angeles. The poem ends with these powerful lines:

Yes, I’ll smile, indeed, through tears and weeping,
Sing my songs where evil holds its sway,
Hopeless, a steadfast hope forever keeping,
I shall live! You thoughts of grief, away!

The play continued by citing the two great loves of Ukrainka’s life: Serhiy Meszynskyj, a man she deeply loved but who was unattainable, and after whose death she suffered tremendous grief and abandonment; and Klement Kvitka, with whom she spent her last ears in Georgia, where they experienced suffering, poverty and loneliness in a foreign land, longing but unable to return to Ukraine.

Next came the documentary film, “Great Ukrainians,” directed by V. Nykolayets, which ended with a shot of the couple as they sit close to each other on a bench in their humble home. The camera focused on Lesia’s face, and the audience was transfixed on Lesia’s intense eyes on the screen, as her spirit (Ms. Stadnyk) spoke from backstage: “I lived a beautiful and fulfilling life. Fate granted me good fortune to leave my footprints on this earth, the earth on which I was born and I glorified. They called me a woman possessed, a singer of earthly passion, a flower which breaks through boulders, daughter of Prometheus! But I, a star, a heavenly star that shone brightly, burned out, and disappeared.”