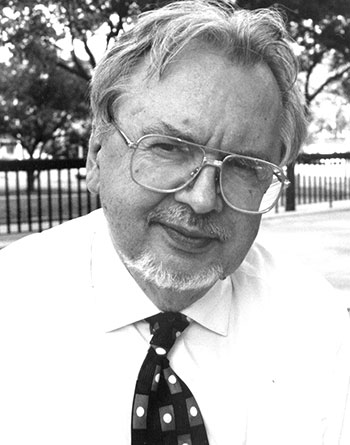 OSTROH, Ukraine – Dr. Lubomyr R. Wynar, the prominent scholar, academic organizer, founder and editor for many years of the journal Ukrainian Historian, passed away on Easter Sunday, April 16, in Woodstock, Ga. He was 85. His death, following a brief illness, constitutes a huge loss for historical scholarship and for his family and colleagues.

Lubomyr Roman Wynar was born in Lviv on December 16, 1931, (the official date of birth is January 2, 1932) to a family of educators. Despite difficult times, he obtained an excellent education (he began his secondary education at the Academic Gymnasium in Lviv and continued in gymnasiums in the displaced persons (DP) camps, initially in Karlsfeld and later in Berchtesgaden).

While still in Europe, he studied history at the Ludwig Maximilians University and the Ukrainian Free University, both in Munich. In the U.S., he received a diploma in archival studies and library science at the Western Reserve University in Cleveland. The scholar worked at a number of American universities, among them Kent State University in Ohio, where he stayed the longest (1969-1996).

While at Kent State, he founded and was director of the Center for the Study of Ethnic Publications and published an international journal on ethnic studies, Ethnic Forum (1980-1995.)

Dr. Wynar was also a professor at the Ukrainian Free University in Munich.

He was well-known as the author of more than 2,000 academic studies, among which were some 37 books that he wrote and another 48 that he edited, along with 28 bibliographic guides. He perfected historical research methodology, exhibiting a deep and seemingly innate knowledge of history, historiography, bibliography, knowledge of source materials and other branches of scholarship. Among those, his work on historian and political leader Mykhailo Hrushevsky (1866-1934) is perhaps the best known.

Dr. Wynar’s historical research was dedicated to the history of the Ukrainian Kozaks; prominent historical figures – from Kozak leaders to the leading political activists of the 20th century; events in the Ukrainian revolution of 1917-1921; World War II; and other areas. He was recognized for his bibliographic guides and publications associated with ethnic museums, archives, libraries and organization in the U.S. Dr. Wynar always included Ukrainian scholarly materials among these works and by so doing promoted Ukrainian studies to an international scholarly forum.

Dr. Wynar was a member and leader of a range of major Ukrainian scholarly organizations in the diaspora and American scholarly organizations. He was one of the founders and later president of the Ukrainian American Association of University Professors; was the vice-chair of the Association for the Research of Nationalities in the USSR and Eastern Europe; headed the World Scholarly Council at the Ukrainian World Congress; was a full member of the Shevchenko Scientific Society; chaired the History Section and was vice-president of the Ukrainian Academy of Arts and Sciences in the U.S. In 1989, he became a member of the executive committee of the Ukrainian National Council, where he headed the Academic Council. As a world-class scholar of ethnic studies, he was a consultant to the Ukrainian program at Harvard University in 1968-1970.

With tireless energy throughout his life, the scholar was the founder and organizer of a wide variety of academic, publishing and institutional projects, countless academic conferences (among those conducted at his initiative and support were three international congresses of Ukrainian historians) in Europe, America, Canada and in independent Ukraine.

Under the direction of Dr. Wynar, the Ukrainian Historical Society became the patron of the historical-memorial museums dedicated to Hrushevsky in Kyiv and Lviv and the Institute for the Study of the Ukrainian Diaspora at the National University of Ostroh Academy and was instrumental in developing cooperation with universities and academic institutes at the National Academy of Sciences of Ukraine.

Researchers in both the diaspora and Ukraine had the highest regard for the contributions of Dr. Wynar to Ukrainian scholarship. The Ukrainian World Congress awarded him its St. Volodymyr Medal (Toronto, 1993); the Shevchenko Scientific Society presented him with the Hrushevsky Medal (Lviv, 1994); the International Hrushevsky Forum awarded him a “Diploma for exemplary contributions to restoring Mykhailo Hrushevsky to his proper place in Ukraine” (Kyiv, 2008); the All-Ukraine Geographical Society recognized him with its Ivan Krypiakevych Award in 2008; the Omelian and Tetiana Antonovych Foundation recognized him for his 45 years of editing the Ukrainian Historian.

Dr. Wynar was happily married for 50 years (1944-2013) to Anna Theresa (née Kuzmych). He is survived by his grieving family: daughter Natalia-Wynar-Chambers and her husband, Andy Chambers; grandchildren Rostyslava and Reese; and nephews and niece Taras, Mykhailo and Roksolana Wynar.

The funeral will be Monday, May 1, at 10 a.m. at St. Andrew Ukrainian Catholic Church in Parma, Ohio. In lieu of flowers, the family requests donations for the continued publication of the Ukrainian Historian” (P.O. Box 674074, Marietta, GA 30066).

Dr. Alla Atamanenko of the National University of Ostroh Academy submitted this obituary on behalf of the Executive Committee of the Ukrainian Historical Society.