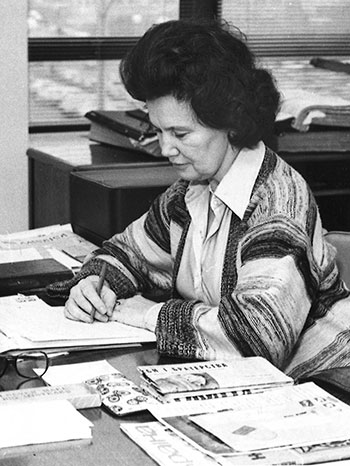 Lubov Kolensky at her desk at Svoboda, then located in Jersey City, N.J.

PARSIPPANY, N.J. – Lubov Lydia Kolensky, a former editorial staff member of the Ukrainian-language newspaper Svoboda, died on August 14 at the age of 93.

Mrs. Kolensky was both an author and a journalist. She wrote novelettes, short stories, sketches and dramas, as well as poetry. She continued writing poetry, in both the Ukrainian and English languages, long after she retired and later moved to Sloatsburg, N.Y.

She was an editor for 25 years at Svoboda, where her colleagues knew her as an energetic and creative writer.

She was born Lubov Savchak on April 17, 1923, in the Ukrainian city of Stanislaviv (now known as Ivano-Frankivsk), completed school in Lviv and then attended university in Innsbruck, Austria, studying philosophy.

Her debut work as an author was a short story in Ukrainian titled “Turboty Dniv” that was published in 1946 in Zveno (Innsbruck, Austria). She emigrated to the United States with her family in 1949. Here she first found work at a school of Ukrainian studies and then at Svoboda.

In the United States, Svoboda Press published several of Mrs. Kolensky’s works, including “Dzerkala” (Mirrors), a collection of novelettes, in 1981 and “Potoybich Rubikonu” (Beyond the Rubicon), a book of short stories, novelettes, sketches and a play in 1988.

She was recognized for her literary work in 1982 with an award from the Ivan Franko Literary Fund in Chicago. Her literary works were the subjects of studies by Kost Kysilevsky and Wolodymyr Zyla.