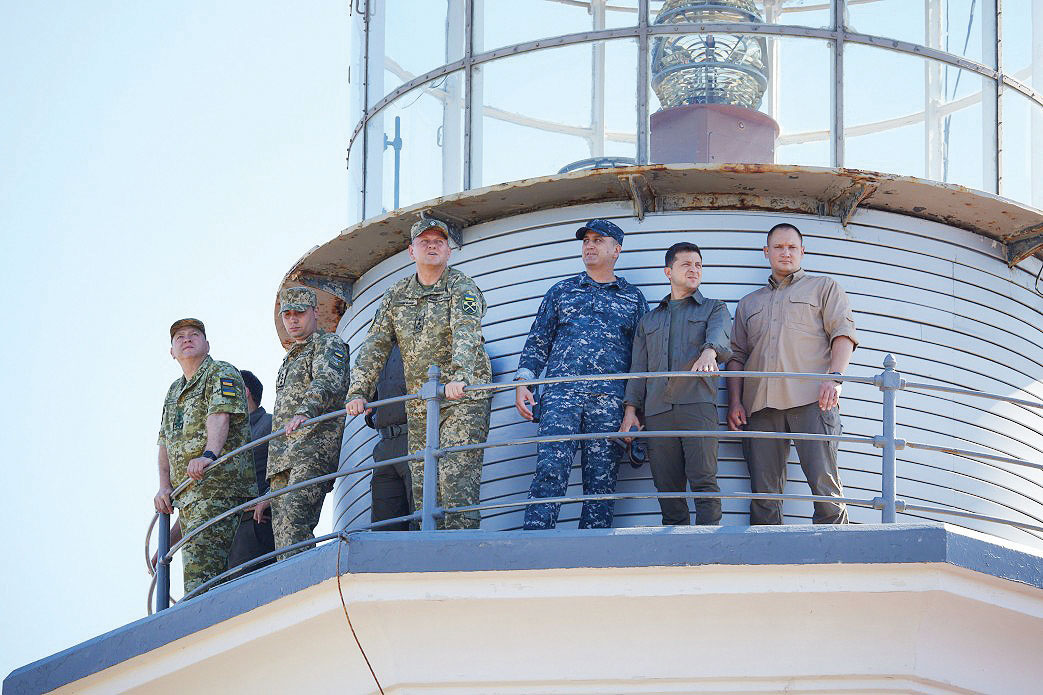 KYIV – Self-proclaimed Belarusian President Alyaksandr Lukashenka has intensified hostility toward Ukraine by accusing the country of sending “weapons and fighters” into the neighboring country to “fuel unrest.”

During a prolonged eight-hour monologue in Minsk on August 9 in front of the “public, experts and media community,” according to the country’s presidential website, he blamed Ukraine and the West for stoking the pockets of protests that still persist one year after what many believe was a fraudulent presidential election that could have ended his 27-year-old authoritarian grip on the country.

Blaming Ukrainian President Volodymyr Zelenskyy, he rhetorically asked: “Why are you training militants on the territory of Ukraine and throwing weapons at us here?”

The Ukrainian president’s new spokesperson, Serhiy Nikiforov, the following day rejected the allegations without referring to the dictator by his proclaimed title. Kyiv, the European Union, the United States, Britain and Canada, have not recognized the outcome of last year’s disputed presidential election and have financially sanctioned Mr. Lukashenka’s regime for severe human rights abuses and for clamping down on the media. 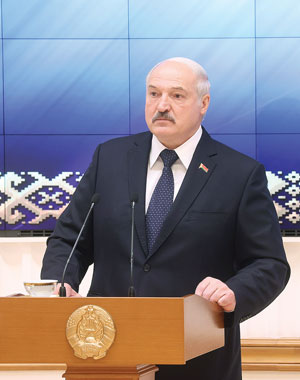 Self-proclaimed Belarusian President Alyaksandr Lukashenka at a meeting with senior government officials in Mink on July 30.

“President Volodymyr Zelenskyy calls the accusations made by Alyaksandr Lukashenka of training militants on the territory of Ukraine, which are then allegedly sent to Belarus, unfounded,” Mr. Nikiforov said. “Such statements are directed on distraction from a domestic political situation in this country.”

A separate response came from Ukraine’s Foreign Affairs Ministry on the election’s one-year anniversary. That response called on the dictator to install democratic rule in the beleaguered country. In addition to Poland and Lithuania, Ukraine has become a favored destination for Belarusian exiles, especially among the country’s approximate 70,000 information technology professionals.

“Ukraine will remain open and hospitable to the citizens of Belarus who are forced to look for places to live and work in Ukraine,” the ministry’s statement said. “Ukraine is in solidarity with the Belarusian people and supports their desire to live in a free, democratic, truly independent European state, in which the voice of every citizen is taken into account. The Belarusian people are among the closest and friendliest to Ukraine.”

Large-scale, nationwide protests erupted immediately after the election in which the dictator’s main opponent, Svytlana Tsikhanouskaya, was seen as the victor. Her husband had initially been the main opposition candidate but was jailed on spurious charges in May 2020, so she entered the race. Ms. Tsikhanouskaya currently lives in exile in the EU and NATO-member country of Lithuania and has urged foreign leaders to impose stricter sanctions on Mr. Lukashenka’s regime.

However, and with Russia’s support, Mr. Lukashenka has cracked down on the pro-democracy protests using arbitrary arrests, torture and a clampdown on independent media. Russian journalists were subsequently sent to run state-owned media outlets after the vast majority of their staffs had resigned. Moscow also props up Minsk’s economy financially and owns a huge chunk of its natural-gas pipeline network that supplies energy to greater Europe.

In addition, Mr. Lukashenka has since the election met with his Russian counterpart, Vladimir Putin, about once a month.

On July 8-9 alone, Belarusian law enforcement “carried out nearly 70 raids on media outlets and journalists’ homes, arresting at least 15 of the journalists, including four who are now being prosecuted on terrorism charges,” Reporters Without Reporters and the World Organization Against Torture said in a joint report published on August 9.
Belarusian-Russian military drills 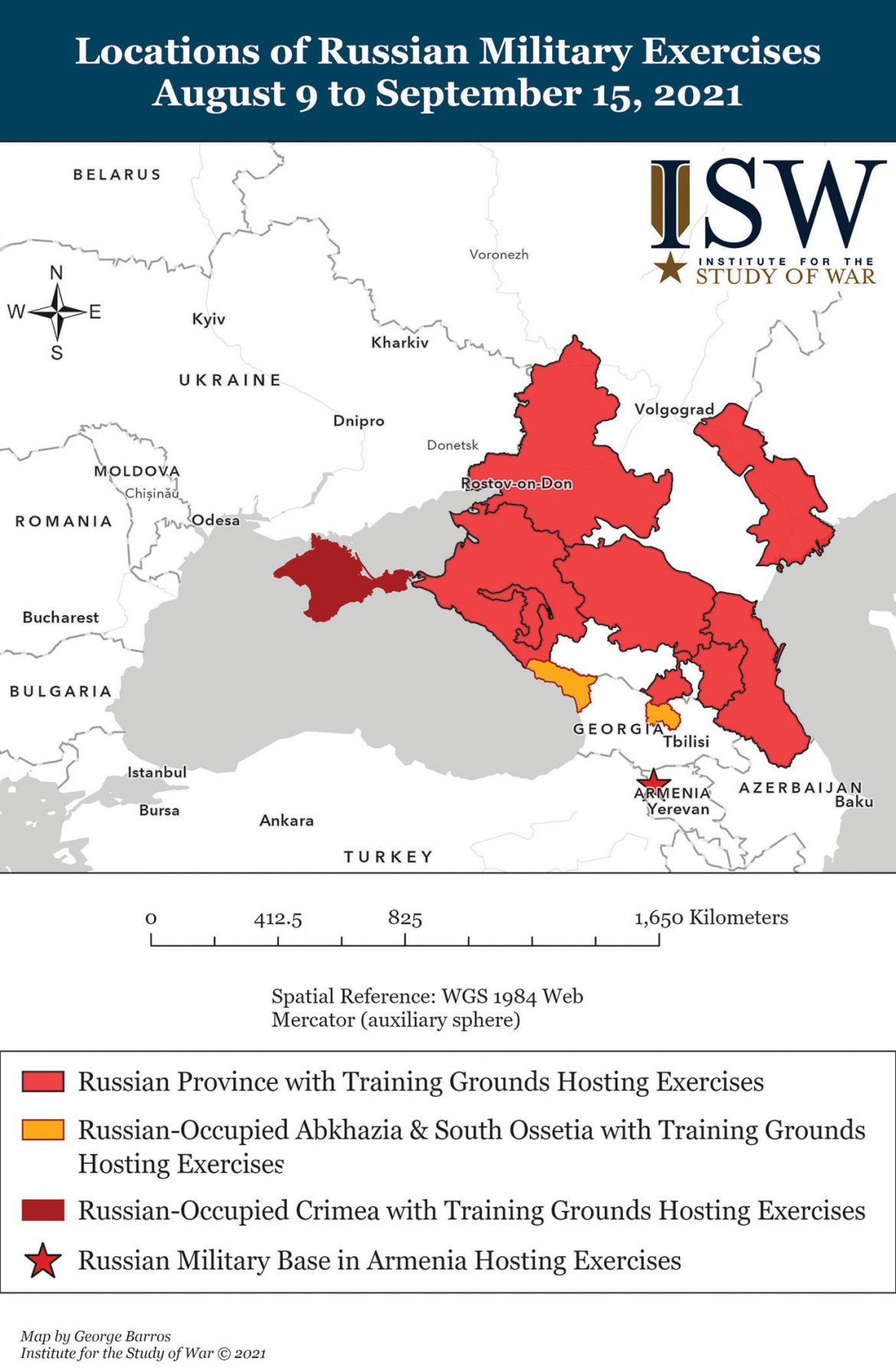 Institute for the Study of War

Preparation for massive Russian-Belarusian military exercises have already begun for the capstone Zapad-21 (West) drills. They take place yearly and are quadrennial based on the four main geographic compass zones of Russia.

In parallel, Russia’s Southern Military District on August 9 started massive drills along Ukraine’s eastern state borders as well as to the south in occupied Crimea that was forcibly seized in early April 2014.

“The Russian military is framing the exercises as testing the ability of Russian officers to use attached assets and demonstrate creative decision-making,” the Washington-based Institute for the Study of War (ISW) said in an analysis.

The drills will run through September 15 and will coincide with Zapad-2021.
The Russian military holds an annual capstone military exercise every September, rotating between Russia’s four military districts – East, Center, South and West.

“Zapad-2021 will occur in the Western Military District and Belarus from September 10-16,” ISW said.

In April, Russia held large-scale drills around Ukraine’s state borders and Kyiv had said that after they concluded, about 80,000 personnel along with military hardware remained deployed near the state borders.

In response, Ukraine held its own military exercises in the southern regions of the country.

Mr. Zelenskyy on August 9 observed one of the drills held by the Joint Forces Command in Mykolayiv Oblast that concluded five days later. The military camp he visited, Shyroky Lan (wide field), “was built according to NATO standards and is designed for 2,500 people,” a presidential office statement said.

While attending the drills, the president introduced his new appointees to the military’s top brass.