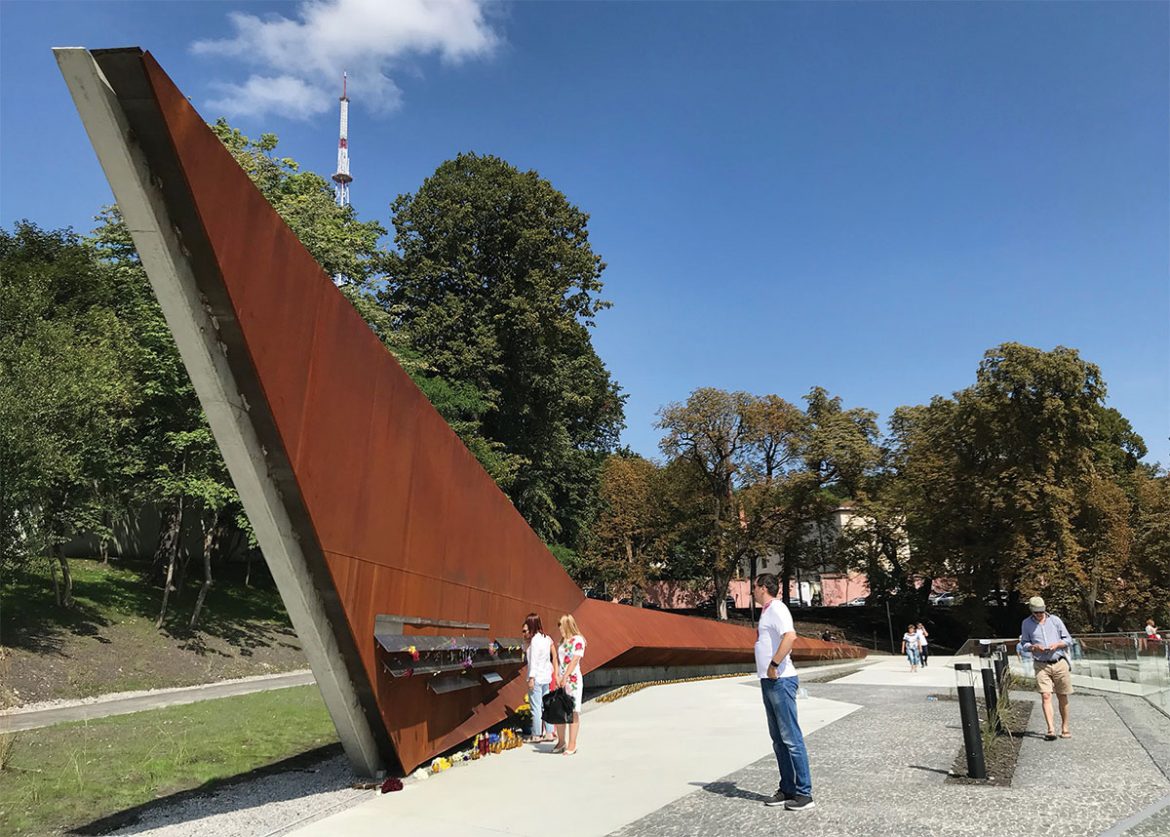 The memorial in Lviv dedicated to the Heavenly Hundred who died during the Revolution of Dignity in 2014.

This weekend Ukrainians celebrated Independence Day. Twenty-eight years ago, Ukraine’s Parliament adopted the Act of Declaration of Independence of Ukraine on August 24, 1991. Since then, an annual massive celebration has been held on August 24. However, after the Russian annexation of Crimea and occupation of some parts of Donetsk and Luhansk oblasts, the value of independence is considered differently. We have visited some events of the celebration in Lviv – the largest city in the west of Ukraine – and asked people on the streets about their thoughts on Ukraine’s independence in view of recent events.

LVIV – “I am a peer of Ukraine’s independence because I was born in 1991. It is very valuable for me as a citizen of this country. From the very beginning, our country is fighting for the independence and many worthful people sacrificed their lives for it,” says Yulia, who we met next to the newly opened Memorial of the Heavenly Hundred in the city center. “We want to be free on the land that is given to us by God, speak our language and appreciate our traditions. At the same time, we are respectful to our neighboring countries and their culture. Celebration of our independence is even more important due to recent events. First of all, it is gratitude for our soldiers at the war front. Thanks to them we have this possibility to wear our traditional clothing and march on our streets. We have a peaceful sky and we sleep in peace.”

In Lviv events dedicated to Independence Day started a day earlier. Local authorities commemorated heroes of the Heavenly Hundred at the Lychakiv Cemetery and went to the city center to hold the opening ceremony of the Memorial of the Heavenly Hundred. The event started with a minute of silence. Mayor Andriy Sadovyi welcomed the families of the heroes of Heavenly Hundred who came to the opening ceremony. “People with different moods will come here, but they all will leave this place with a good mood – their sorrow will pass,” said Mr. Sadovyi. As it was the Day of the National Flag of Ukraine, the culmination of the event was raising the Ukrainian flag at the memorial by children of the heroes of Heavenly Hundred – Vasylyna Kotsiuba, Anastasia Dyhdalovych and Khrystyna Zhalovaha. After that, all participants of the event united in a group prayer.

“This memorial of the Heavenly Hundred is another evidence of the fact that Ukrainians are peaceful people, but we are ready to defend our land,” says Ihor, whom we met near the memorial after the opening ceremony. “Lviv is holding a parade, but probably without machinery [military equipment]. We need to raise the spirit of our boys at the war front. That is why I do not support the decision of our new authorities in Kyiv [to not hold an official military parade as in previous years].” As happened in Kyiv, Lviv held an unofficial march, led by veterans. More than 1,000 people marched from the Lychakiv Cemetery to  Ss. Peter and Paul Garrison Church in the city center. Authorities didn’t show up at the march.

“This celebration is also gratitude to their [Ukrainian soldiers’] families – they accepted this decision to defend Ukraine and are waiting for them home with a strong belief that they will return alive,” continues Ihor. “Someday the peace will come. We need to celebrate Independence Day because tomorrow we might not have this chance.”

On August 24, official events started from raising the flag of the European Union by the City Hall entrance. It is a symbol of Europe’s Prize – an award given by the Parliament Assembly of the Council of Europe to the city of Lviv for the spreading of democratic values and European lifestyle. Another international event which took place during those days was a partnership fair by the sister cities of Lviv – Przemyśl, Krakow, Rzeszów, Wroclaw (Poland) and Tbilisi (Georgia). Within this event, Lviv hosted another 10 official delegations from sister cities. Nearby, hundreds of people gathered at one of the city’s main squares near the Taras Shevchenko monument for prayer for Ukraine.

Lviv’s Rynok square hosted two music events at different parts of the square. The annual festival “Etnovyr” spread folk music for locals and guests of the city in one part and the military orchestra of the Hetman Petro Sahaidachnyi National Ground Forces Academy held an hour-long performance in another part of the square – near the entrance to the city hall.

Apart from official and massive events, Lviv traditionally enjoyed the presence of a huge number of tourists both from other parts of Ukraine and from abroad. Independence Day is a national holiday in Ukraine, so Ukrainians had a three-day weekend – the perfect occasion for travel. As one of the favorite internal travel destinations for Ukrainians, Lviv held a huge number of events during the holidays and celebrated Independence Day.