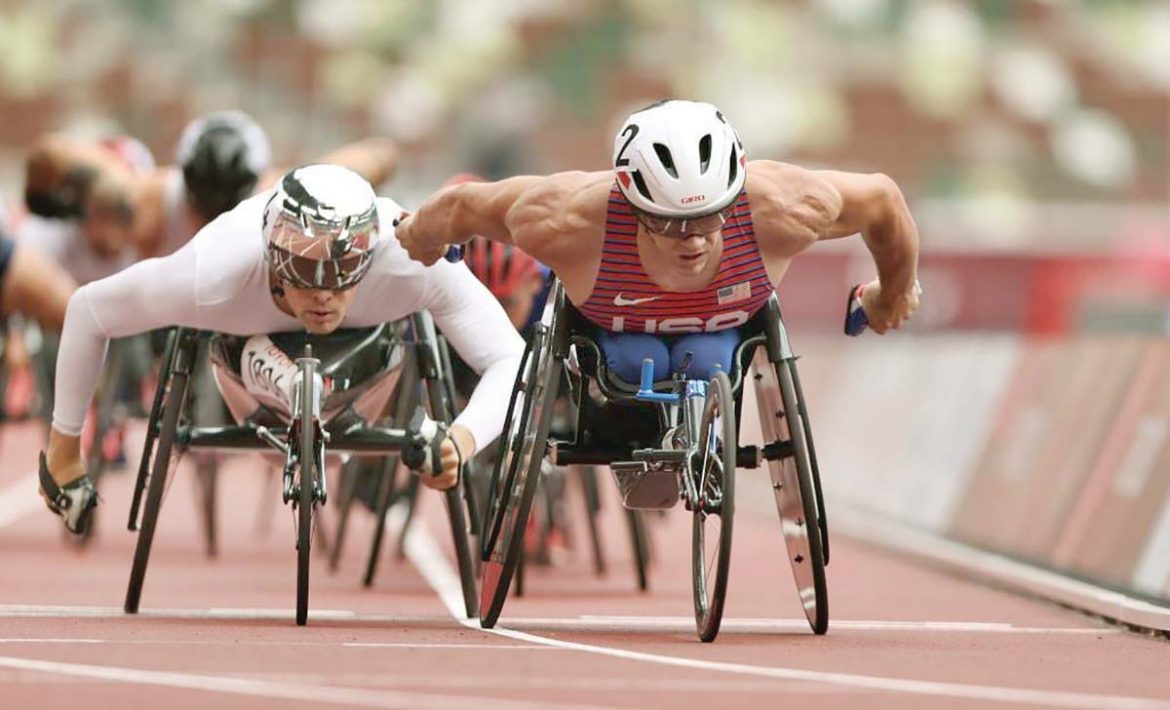 Daniel Romanchuk pushes toward the finish line in the men’s (T54) 1,500-meter race.

Oksana Masters has been making an impression on the Para sports world for almost a decade, “mastering” whichever sport she tries. Owning eight Paralympic medals across three different sporting disciplines, Masters was not quite content. In Tokyo she managed to fill another hole in her athletic resume by winning the women’s time trial (H4-5), claiming her first medal in cycling. It was her first gold medal at a summer Paralympic Games.

A day later, the Ukrainian proceeded to win her second gold medal of the 2020 Tokyo Paralympics, bringing her career total to four gold and 10 medals total in both summer and winter events. She was victorious in the women’s hand-cycle road race.  The win came a day after her victory in the time trial.

Once the race started, it was a whole different matter.

“I did not trust myself, but the minute the clock went off and the whistle went off, I just let my body go on autopilot.”

Masters began her Paralympic career in 2012, winning a bronze medal in rowing at the London Games. She has had equal success in winter events, winning a total of five cross-country skiing and biathlon medals in 2018 and two skiing medals in 2014.

Masters became the fourth American woman, sixth American overall, to win gold at both the summer and winter Paralympics.

Masters’ superiority in cycling is hardly a fluke. She took up handcycling to help her recover from a back injury and has competed at three world championships, winning two silver medals and a bronze. She performance in Tokyo took place a mere 100 days after she had surgery in May to remove a tumor from her femur.

Six-time major marathon winner Daniel Romanchuk won his first Paralympic medal of his career on August 29. The marathon legend, the first and only American man (elite or wheelchair) to win the World Marathon series title, and a reigning world champion on the track, Romanchuk had already made himself famous, but had not yet won a Paralympic medal.

Competing for his native United States, he won the men’s 400-meter (T54) in 45.72 seconds in Tokyo, edging Thailand’s Athiwat Paeng-Nuea by .01 of a second. In the final race, the 23-year-old Romanchuk trailed the 18-year-old Paeng-Nuea as they rounded the final turn, but Romanchuk chased his competitor down the straightaway and caught him at the line.

Romanchuk made his Paralympic debut five years ago in Rio in 2016, racing in every distance from the 100-meter to the 5,000-meter, but placed no better than 13th in his five events.