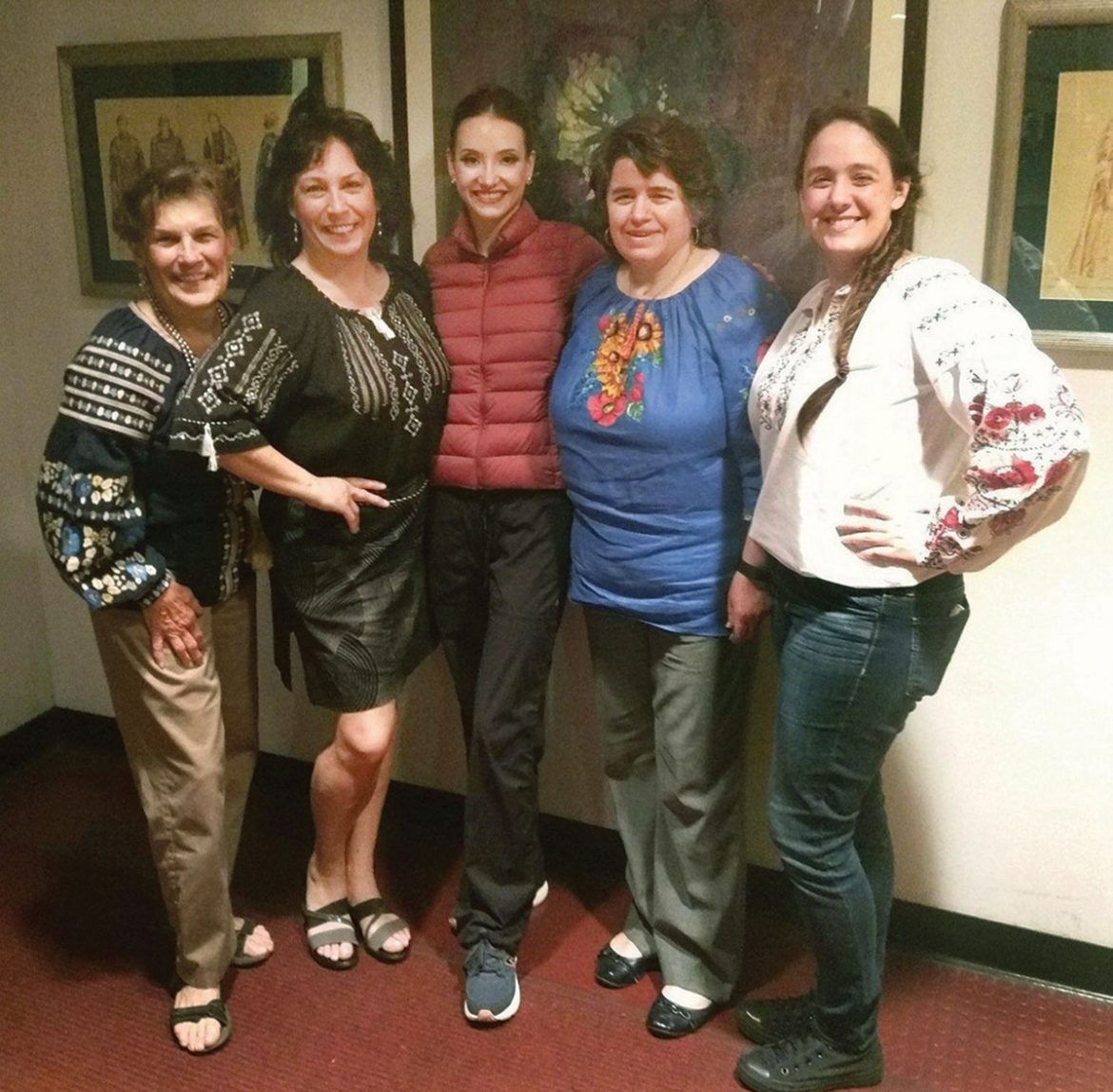 At Lincoln Center on May 30, ballerina Christine Shevchenko (center) is seen with (from left): Olia Szkafarowsky-Rudyk, Lillianna Szkafarowsky-Chudolij, Stefania Tchoryk-Szkafarowsky and Alexandra Szkafarowsky.

NEW YORK – Earlier this year, a group of Ukrainian American women had the honor of meeting the beautiful, talented and charming ballerina Christine Shevchenko, a principal dancer of American Ballet Theater (ABT).

For years this writer has been trying to make it to Lincoln Center in New York to see the ballet “La Bayedere” (The Temple Dancer) choreographed by Marius Petipa, performed to music by composer Ludwig Minkus and staged by ABT. This year, when I received my annual ABT mailing of the season calendar, I quickly scanned the booklet and found that “La Bayedere” was being performed and finally on May 30 – a date that fit my schedule.

Upon reading further, a name jumped out off the page: Shevchenko. A little research led me to learn that Christine Shevchenko has been a dancer all her life. Since birth, she was surrounded by artistic members of her family who saw her potential and nourished her talent. Ms. Shevchenko’s grandfather was a composer, her mother a dancer and her father a gymnast.

Born in Odesa, Ukraine, in 1988, Ms. Shevchenko started training as a gymnast at the age of 4. In 1996 her family immigrated to the United States and settled in Pennsylvania. There, Ms. Shevchenko was enrolled in The Rock School for Dance Education, and, at the age of 8, her dance career was launched.

Ms. Shevchenko has a long list of awards and has performed myriad roles in countless ballets.

In 2006, she joined American Ballet Theater’s Studio Company and the following year joined ABT as an apprentice. She worked her way up from the corps de ballet in 2008 to soloist in 2014, and became a principal dancer in September 2017.

In “La Bayadere,” Ms. Shevchenko danced the major role of Gamzatti. Christina Pandolfi of Broadwayworld.com noted: “The ability to adapt, adjust and make something your own is a rare gift that so often gets taken for granted. But it’s exactly that nuance that let Shevchenko …shine like the brightest star in the sky.”

Ms. Shevchenko’s next performances with American Ballet Theater at Lincoln Center included these in June: Peirette in the comic ballet “Harlequinade”; Odette/Odile in “Swan Lake” and Kitri, the muse of the impossible dreamer and title role in the ballet “Don Quixote.” ABT then went on the road, with Ms. Shevchenko once again performing Gamzatti at the Los Angeles Music Center in mid-July.

In October, Ms. Shevchenko is performing with ABT in New York in a Jessica Lang World Premiere, “Symphonie Concertante” and “Songs of Bukovina.” In December, she dances Clara in “The Nutcracker” at the Segerstrom Center for the Arts in Costa Mesa, Calif., and in late January-early February she will dance Pierrette in “Harlequinade” at the John F. Kennedy Center for the Performing Arts in Washington.