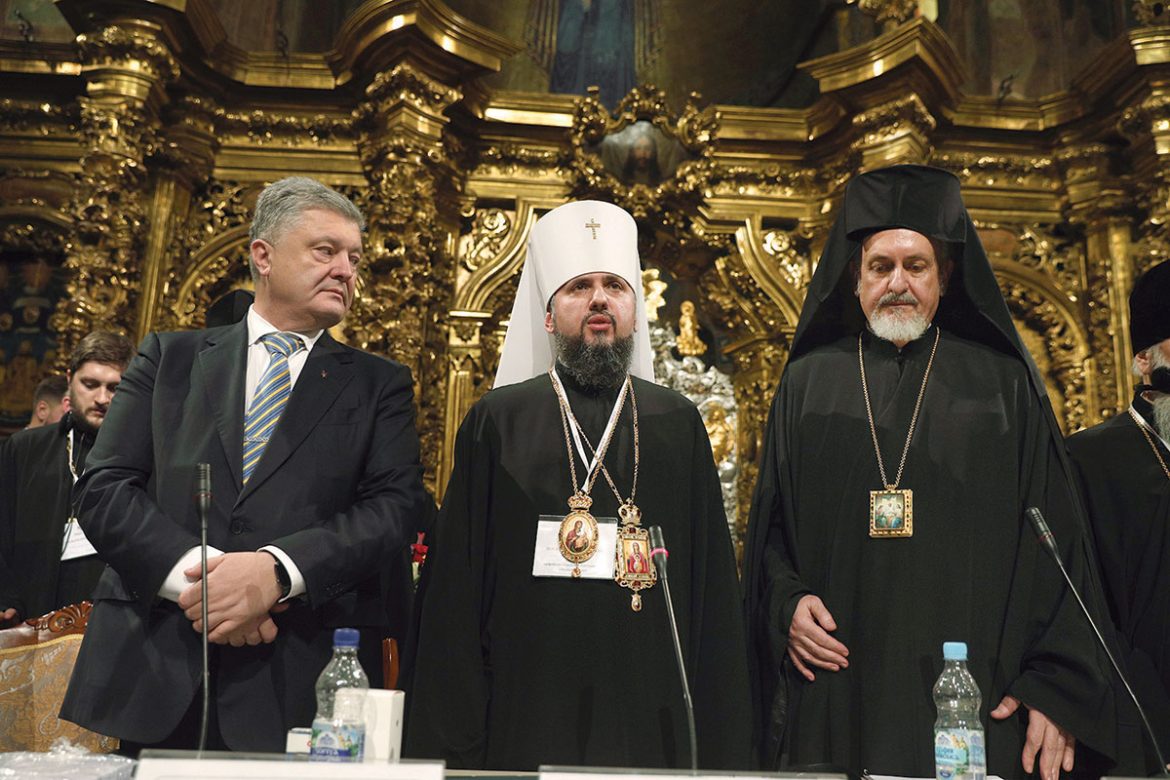 Metropolitan Epifaniy (center), head of the newly established Orthodox Church of Ukraine, stands next to President Petro Poroshenko (left) and Metropolitan Emmanuel (Adamakis) of France inside the 11th-century St. Sophia Cathedral in Kyiv on December 15 during the Unification Synod of church leaders that elected him by secret ballot.

Metropolitan Epifaniy (center), head of the newly established Orthodox Church of Ukraine, stands next to President Petro Poroshenko (left) and Metropolitan Emmanuel (Adamakis) of France inside the 11th-century St. Sophia Cathedral in Kyiv on December 15 during the Unification Synod of church leaders that elected him by secret ballot.

KYIV – A more apt location couldn’t have been chosen to elect the leader of the newly established Orthodox Church of Ukraine on December 15.

As thousands of worshipers stood outside in central Kyiv braving sub-zero temperatures, 192 delegates of the Unification Synod (Council) assembled inside, in the five-naved core beneath the ancient towering domes of St. Sophia Cathedral.

Built in the early 11th century by Prince Yaroslav the Wise when the Kyivan Rus’ kingdom was already evangelized, the church is an “outstanding example of Byzantine art,” according to UNESCO, which designated it a world heritage site in 1990.

Thus, the stage was set to finally grant Ukraine a canonical autonomous Orthodox Church, one that hasn’t existed without subordination to Russia in 332 years. It was the latest step by the country to expel a huge Kremlin lever of influence over Ukraine and reverse centuries of Kremlin domination and colonization.

A huge pantheon of saints depicted on frescoes and mosaics looked down upon the clergymen as they voted to elect Metropolitan Epifaniy (Serhiy Dumenko), 39, of Pereyaslav-Khmelnytsky and Bila Tserkva (Ukrainian Orthodox Church – Kyiv Patriarchate) as the Church’s primate.

He now holds the title of Metropolitan of Kyiv and all Ukraine and will lead a Church that expects to receive autocephaly via a Tomos from its mother Church on January 6 in Istanbul from Ecumenical Patriarch Bartholomew of Constantinople.

The following day Metropolitan Epifaniy called for unity while celebrating his first liturgy after the election at St. Michael’s Golden-Domed Monastery in Kyiv.

“We must complete the unification of Ukrainian Orthodoxy… pray for an end to the war [in eastern Ukraine], and for a just peace in Ukraine,” Metropolitan Epifaniy said, according to Radio Free Europe/Radio Liberty. 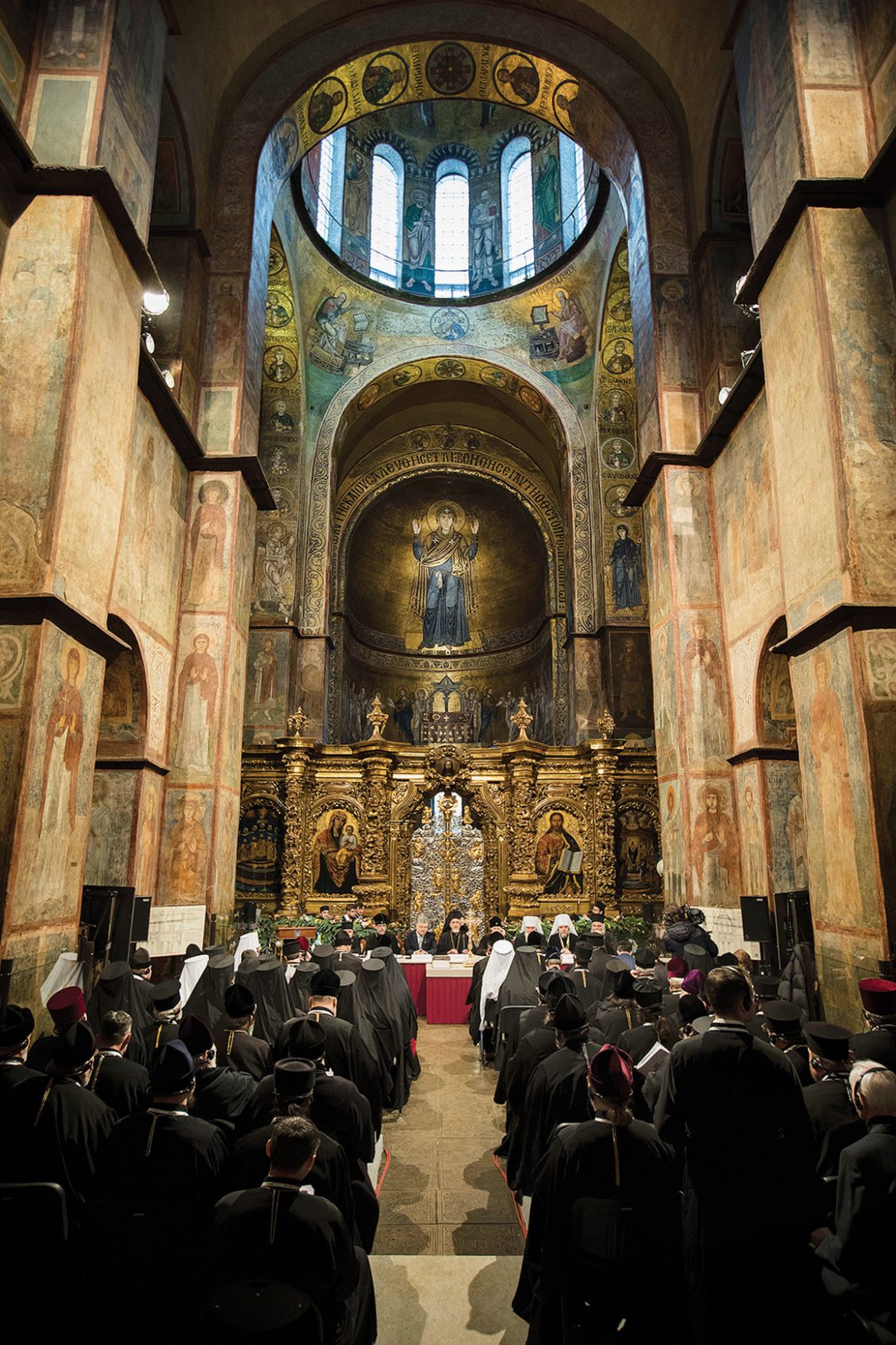 Clergymen gather inside the 11th-century St. Sophia Cathedral in Kyiv during the Unification Synod that elected Metropolitan Epifaniy as the primate of the newly formed Orthodox Church of Ukraine.

During the Sunday liturgy, the metropolitan urged priests and parishes under the UOC-MP to also join the newly established Church.

The UOC-MP was the only one of three Orthodox Churches in Ukraine that was canonically recognized. A branch of the Russian Orthodox Church (ROC), the UOC-MP refused to participate in the Unification Synod. Meanwhile, the ROC severed its relationship with the Ecumenical Patriarchate in Istanbul, where Ecumenical Patriarch Bartholomew is considered the “first among equals” in the world’s Orthodox community of 250 million to 300 million faithful.

President Petro Poroshenko, who also was present during the ecclesiastical council, described the outcome as Ukraine’s concluding break from Russia’s yoke.

“This day will go into history as a sacred day… the day of final independence from Russia,” he told thousands of supporters gathered on St. Sophia Square.

The Russian Orthodox Church has so far called two of its Ukrainian members who joined the Unification Synod “traitors.”

Writing about the ROC’s decision to end diplomatic ties with the Constantinople Patriarchate, religious expert Giacomo Sanfilippo noted in an opinion piece published on December 14 in the Kyiv Post: “The facts seem clear: Moscow has willfully created and orchestrated a global schism the scale of which we have never seen in Orthodox history – worse than 1054, as promised.”

“These do not look like the actions of a Church motivated by pastoral concern for anyone at all, but the retaliation of a thug who sees his power slipping through his fingers,” Mr. Sanfilippo commented.

About 54 percent of Ukrainians view the Orthodox Church’s autocephaly as “positive,” according to a survey conducted by the Rating Sociological Group whose findings were released in October. Nineteen percent hold the opposite view.

The ROC claims that it has more churches and parish communities in Ukraine than the other two Orthodox Churches combined. However, 29 percent of Orthodox believers identify with the Kyiv Patriarchate, according to findings from a Razumkov Center poll published on April 26. Less than half that number identify with the Moscow Patriarchate. The remainder say they are simply “Orthodox.”

President Putin has promised to “protect” believers of the UOC-MP and property belonging to it.

The Security Service of Ukraine (SBU) said two days before the synod that it had prevented a series of provocations directed by Moscow to fracture the event.

They were to take place at religious sites throughout the country, including the Monastery of the Caves (Pecherska Lavra) in Kyiv, another UNESCO heritage site.

At a press briefing, the first deputy head of the SBU, Viktor Kononenko, said that Lavra leader Metropolitan Pavlo (Lebed) had met with Russian agents in Moscow and received $5,000 to coordinate the actions on December 13-14. Among them allegedly were the takeover of church property and injuries and killings of worshipers at various religious sites.

Metropolitan Pavlo rejected the allegations and called the SBU’s investigation “political pressure” ahead of the Unification Synod. He cited the counterintelligence agency’s searches of his residence on November 30.

Asked why Russia is so opposed to Ukraine receiving a Tomos, the chief editor of the Religious Information Service of Ukraine, Taras Antoshevskyi, told Radio Liberty that is because “it ruins the historical myth of the unity of the Russian Empire’s people.”

He said the myth was built over the centuries with great effort, including by Soviet dictator Joseph Stalin.

“This myth is guided by representatives of the Russian Orthodox Church,” Mr. Antoshevskyi said. “The main idea of the myth is that Ukrainians and Russians are one people, and therefore Ukrainians do not need an independent Church. And the destruction of this myth is very dangerous for the new imperial policy of the Kremlin.”

Metropolitan Epifaniy was born in Odesa Oblast, but grew up in the village of Stara Zhadova in Chernivtsi region, according to a profile published on RISU’s website. Upon completing high school, he entered the Kyiv Theological Seminary in 1996, graduating three years later. He immediately entered the Kyiv Theological Academy, finishing in 2003. He also studied for two years in 2006-2007 at the National University of Athens, majoring in philosophy.

The metropolitan was given the clerical name of Epifaniy on December 21, 2007, after being tonsured a monk. A year later he was “appointed secretary of Patriarch Filaret (Denysenko),” wrote RISU.

He was appointed Bishop of Vyshhorod in 2009 and a year later was chosen to lead the Kyiv Orthodox Theological Academy and became ruling bishop of the Peryaslav-Khmelnytsky eparchy.

In 2012, he rose to archbishop, and then metropolitan a year after that. At the time of his election as head of the new Orthodox Church of Ukraine, he was also a permanent member of the Holy Synod of the UOC-KP.