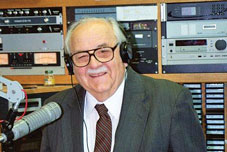 Michael Komichak, who hosted the Ukrainian Radio Program in Pittsburgh.

PITTSBURGH – Michael Komichak, a prominent ethnic radio broadcast personality who had been the host of Pittsburgh’s Ukrainian Radio Program since July 1950, died on December 28, 2014. He was 95.

The Ukrainian Radio Program in Pittsburgh, now in its 65th year of continuous service to the Ukrainian American community in western Pennsylvania, eastern Ohio and northern West Virginia, is heard each Sunday at 1-2 p.m. on Radio Station WPIT-AM (730), and can be heard on the Internet at www.wpitam.com.

Mr. Komichak, a noted Ukrainian American community leader, presented the program in Ukrainian and English, and featured traditional and contemporary Ukrainian music, news, commentaries, and Ukrainian social and community activity announcements. The program’s objectives have been to champion the cause of freedom and independence for Ukraine, to promote Ukrainian culture and consciousness, to preserve, maintain and nurture the Ukrainian identity and heritage of its listeners through music, language, history and traditions, and to reflect the best image of Ukrainian-Americans. For many listeners, the radio program is the primary source of current information about Ukraine and Ukrainian activities on the local, national and international scenes.

Through his radio program over the years, Mr. Komichak supported and promoted the activities of Ukrainian fraternal, cultural and civic organizations and the Ukrainian Catholic and Ukrainian Orthodox Churches on the national and local levels, and sponsored, organized and promoted Pittsburgh-area Ukrainian American community events and observances, including Captive Nations Week marches and public demonstrations, public gatherings and programs commemorating Ukraine’s Independence Day (January 22 and August 24), Pittsburgh’s celebration of the Millennium of Christianity in Ukraine, anniversary commemorations of the 1932-1933 Famine-Genocide in Ukraine, and numerous concerts and cultural performances featuring Ukrainian music, song and dance presented by choruses, orchestras, folk dance ensembles and entertainers from Ukraine, the United States and Canada. He generated and mobilized Ukrainian-American community financial support for many Ukrainian projects and causes, over the years raising a total nearing $1 million for the establishment of the Taras Shevchenko Monument in Washington, the endowment of three chairs of Ukrainian studies at Harvard University, the establishment of the Ukrainian Nationality Classroom at the University of Pittsburgh, the purchase of the Ukrainian Embassy in Washington, and for Ukrainian orphans, army veterans, displaced persons, child victims of the Chornobyl nuclear disaster, victims of mine and natural disasters, and other needy persons in Ukraine.

Born on October 21, 1919, Mr. Komichak was a lifelong resident of McKees Rocks, Pa., near Pittsburgh. He visited Ukraine for the first and only time in 1997. During World War II, he served with the United States Merchant Marine as a lieutenant junior grade aboard a Liberty ship, sailing around the world three times and delivering troops, ammunition, supplies and war materiel to the Allied war effort in the European and African theaters, including the Allied invasion of Italy at Anzio.

He began his 45-year career in commercial radio with WPIT in 1947, initially serving as the station’s first radio engineer, and subsequently serving as chief engineer and assistant station manager, and as WPIT’s general manager from 1975 until his retirement in 1992.

Mr. Komichak was a member of the Ukrainian National Association and will be remembered by many UNA convention delegates, as he attended and recorded four conventions beginning with the 1994 convention in Pittsburgh. Mr. Komichak and his family spearheaded the Convention Committee that organized and hosted the Pittsburgh convention, which marked the 100th anniversary of the UNA.