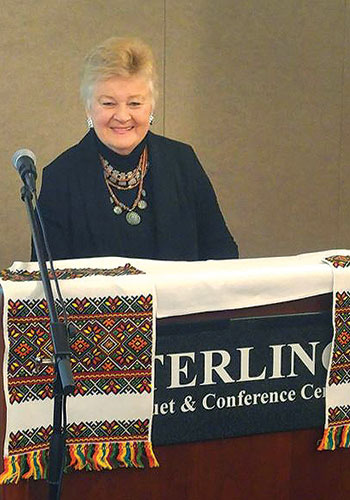 Vera Andrushkiw speaks at the conference session titled “Adding to the Melting Pot: Ukrainians in Detroit.”

STERLING HEIGHTS, Mich. – “Adding to the Melting Pot: Ukrainians in Detroit” was a session topic featured at the annual “Michigan in Perspective” local history conference held in Sterling Heights on March 3-4. Although the roads were icy outside, inside the Wyndham Garden Hotel, the air proved electric as nearly 600 history aficionados gathered to attend 25 breakout sessions over the course of two days.

Vera Andrushkiw, president of the Detroit Regional Council of the Ukrainian National Women’s League of America and vice-president of the U.S.-Ukraine Foundation, was invited to host a session. Coincidentally, the event was held at the same time that the film “Bitter Harvest” about the Ukrainian Holodomor was playing in local theaters.

Speaking before a packed room, Ms. Andrushkiw gave a dynamic and comprehensive presentation that featured a synopsis of Ukraine’s history, in which she detailed the complexities as Ukraine continually found itself being carved out among various countries. Independence, she stressed, was always key for every Ukrainian. She then discussed the four waves of Ukrainian immigration to the United States and the local area, highlighting the many people, organizations and churches that, in essence, built up the community throughout the years.

The first Ukrainian who moved to Detroit was Mykola Stefansky, who arrived in Detroit in 1885 with his family and settled on the west side of Detroit. Other Ukrainians followed, and in 1907 a small wooden Ukrainian church was built on Cicotte Avenue on the west side of Detroit. Prior to that time, a Jewish merchant, who was originally from Ukraine, helped Detroit Ukrainians by inviting them to use a Jewish synagogue for their services and helped them organize their congregation.

Ms. Andrushkiw explained that, as more Ukrainians emigrated to Detroit, the community expanded to Hamtramck, where more churches, schools and credit unions were built. Interestingly enough, Hollywood actor John Hodiak, who grew up in Hamtramck and was married to the actress Anne Baxter, participated in his first theatrical performances in Ukrainian community plays.

Hamtramck’s Immaculate Conception Ukrainian Catholic Church (which was completed in 1942 and later painted by well-renowned artist Mychailo Dmytrenko in the early 1960s) was featured in the book “Detroit’s Historic Places of Worship,” published by Wayne State University Press in 2012. Wayne State University features a Ukrainian Room as part of the Manoogian Hall heritage rooms decorated by the Kozak family of artists – Edward, George and Jerome, as well as Mykhailo Mayorchak.

A slide show enhanced Ms. Andrushkiw’s vibrant talk and there were many interesting facts that she deftly weaved in throughout, including personal stories of her childhood in both Germany and New York City. She emphasized how, even during Soviet times, Detroit Ukrainians demonstrated and worked with the local media to include articles on the dissident arrests and trials in support of human rights for political prisoners in Ukraine. Marie Zarycky, who was the president of the Committee for the Defense of Human Rights at that time, was in the audience.

Ms. Andrushkiw also talked about current events and the devastating effect of Russia’s war in Ukraine, emphasizing that this is in no way a civil war. She noted that another local Detroit Ukrainian, Dr. Ulana (née Jurkiw) Suprun, is the acting minister of health in Ukraine, and is working to transform the country’s corrupt medical services.

There were some attendees who were not at all familiar with Ukraine’s history and were impressed with the talk and interested in learning more. “I’ve been coming to this conference for many years now and this session, by far, was the best one. Ms. Andrushkiw was very engaged with the audience,” commented one attendee. 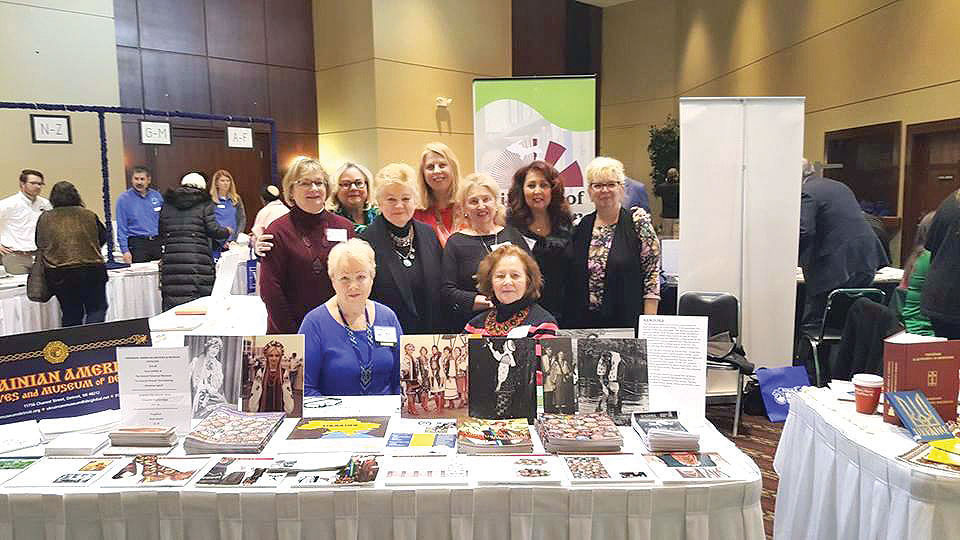 In coordination with the Ukrainian session, two exhibit tables showcased Ukrainian culture and books by local Ukrainian American authors. The Ukrainian American Archives and Museum of Detroit, which recently purchased a larger facility in Hamtramck, had displays, books and pamphlets available to the public portraying different eras and costumes in Ukrainian history from earliest times. In 2013, the museum organized an exhibit about the local Ukrainian diaspora, which was held at the Detroit Historical Museum. The exhibit featured an excellent catalogue compiled by Dzvinka Nykorak Hayda, John Nagridge and Myroslava Stefaniuk. Over 1,000 pysanky (by Dr. Luba Petrusha, Arnie Klein and Roman Seniuk) were displayed, and a catalogue and newsletter describing the origins and symbolism of the Easter eggs were available for purchase at the conference.

The second table featured books by local Ukrainian American authors, including several books about the history of Ukrainians in Detroit, specifically “Ukrainians in Detroit” by Michael and Martha Wichorek, “Ukrainians of Detroit” by Myrosia Stefaniuk and Fred Dohrs, and “Ukrainians of Metropolitan Detroit” by Nancy Wichar. These were snapped up by attendees and highlighted the growing interest generated by the session. Ms. Andrushkiw has been asked to write an article for the magazine of the Historical Society of Michigan. Additionally, Michigan State University Press has expressed interest in publishing a book on Ukrainians for their “Discovering the Peoples of Michigan” series.

The enthusiasm that participants displayed at the conference was very uplifting as so many of them expressed further interest in learning more about Ukraine and its culture. In turn, some of the Ukrainian Americans present had the opportunity to interact with other immigrant groups and local Michigan organizations, and perhaps plan for future exchanges.