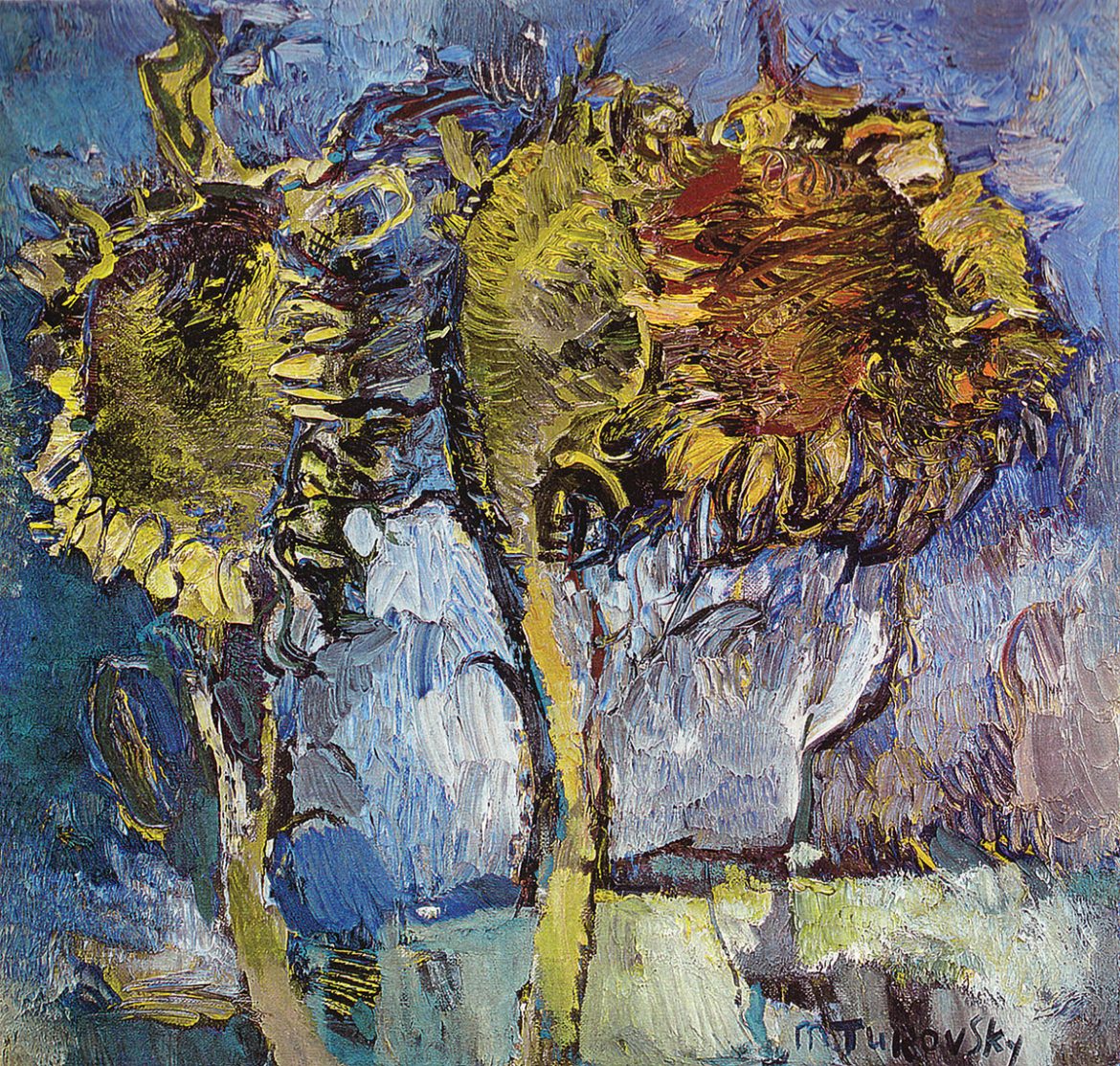 An oil painting from the “Sunflower Suite” by Mikhail Turovsky.

NEW YORK – The Ukrainian Museum is presenting “From Darkness to Light: The Paintings of Mikhail Turovsky,” a retrospective exhibition of works by the artist, who began his career in Soviet Ukraine. The Ukrainian poet Vasyl Makhno is guest curator of this exhibition, which will showcase a selection of paintings from the artist’s years in the U.S. The exhibition opened on October 27 and will be on view through March 22, 2020.

Born in 1933 to Jewish parents in Kyiv, Mr. Turovsky experienced the horrors of World War II as a child. Evacuated from Kyiv, the family suffered a grueling existence in Uzbekistan before returning to a Ukraine devastated by war. Mr. Turovsky received a solid academic art education at the Kyiv Art Institute, at a time when the 20-something postwar generation in Europe and the U.S. laid claim to rethinking worldviews and traditional artistic concepts.

In the artistic milieu of the 1960s, writes Mr. Makhno, there was an obvious struggle between tradition and innovation. Mr. Turovsky’s development as an artist is rooted in the post-Stalin “Shistdesiatnyky” (The Sixtiers) movement that peaked in the 1960s. It was a cultural shift that challenged government-sanctioned socialist realism, but despite the Khrushchev thaw – a period when repression and censorship were eased – the movement fell victim to arrests and the sentencing of many of Mr. Turovsky’s peers. Disheartened, Mr. Turovsky sought to emigrate and made his way to the U.S., where he settled with his family in 1979.

Mr. Turovsky’s rebirth as an artist took place in New York City. Confronted by a metropolis brimming with art and commercial galleries that had their pick of artists to represent, Mr. Turovsky had to rethink his creative path in order to make his mark. The artist’s perceptions transitioned to diverse directions as he rebuffed his characteristic painting style. It is precisely at this juncture in Mr. Turovsky’s career that we encounter the earliest selections from his oeuvre, the essence of which the curator exemplifies in this retrospective.

A recurrent theme in this retrospective is Mr. Turovsky’s emotive mother and child paintings, symbolic of earthly existence for the artist. Women are frequent subjects in the artist’s portfolio, as Mr. Makhno points out, and he theorizes that Mr. Turovsky is “attempting to comprehend the completeness of the world through the form of the female figure.”

“From Darkness to Light: The Paintings of Mikhail Turovsky” features more than 60 large-format works from the artist’s collection, spanning the years 1979 through the present. The exhibition is accompanied by an illustrated brochure with an essay by the curator.