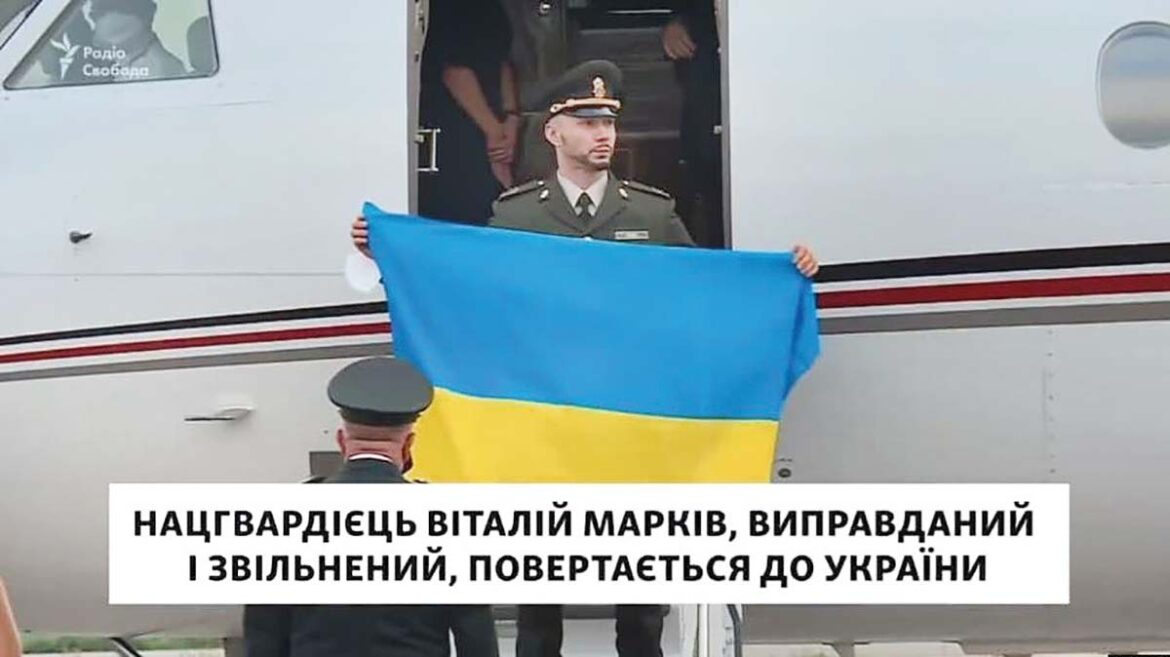 Vitaliy Markiv holds a Ukrainian flag while exiting an airplane in Kyiv on November 4 after flying from Milan, where he was released from prison after having been found not guilty of being an accessory to murder.

KYIV – When Ukrainian National Guardsman Vitaliy Markiv was released from a maximum-security prison in Italy on November 3, it seemed that Ukraine also was vindicated of the false criminal charges of being an accessory to murder.

After spending three years, four months and two days in a Milan prison for his alleged role in killing an Italian photojournalist and his Russian interpreter in an eastern Ukrainian war zone, an appellate court ordered Mr. Markiv’s immediate release upon acquitting him of all charges.

At around 9:50 p.m. local time, the 31-year-old native of Ternopil Oblast regained his freedom, emerging with a Ukrainian flag draped over his shoulders and wearing a T-shirt bearing the Ukrainian trident symbol (tryzub) with the insignia of his 1st Battalion of the National Guard.

Flanked by Ukrainian Internal Affairs Minister Arsen Avakov and wearing a mask with Ukrainian embroidery, Mr. Markiv’s first words were: “This is an extraordinary moment. We proved that the truth exists. Justice exists. My conviction in the lower court showed that there are no limits to the reach of Russian propaganda. The truth and goodness prevails.”

He added with restrained emotion, while pivoting on his left and right legs: “This is my victory – this is in memory of all those who’ve perished in the [Donbas] war since 2014.”

It was a direct reference to Russia’s war in Ukraine that has led to the deaths of more than 13,000 people in the country’s two easternmost regions of Luhansk and Donetsk.

His remarks also mentioned one of Russia’s many weapons in its hybrid war toolbox – disinformation – which Mr. Markiv’s defense and his supporters say influenced the criminal trial and the Italian media’s coverage, and even made its way into evidence that prosecutors had presented.

The Kharkiv Human Rights Protection Group (KHPG) and other observers said the disinformation helped destroy the defendant’s presumption of innocence and eliminated the possibility of him having a fair trial.

The following day, the National Guard senior sergeant landed in Kyiv dressed in a military uniform with Mr. Avakov, his ultimate superior, and Lyudmyla Denisova, the country’s human rights ombudswoman.

In a Facebook post, Ms. Denisova called Mr. Markiv “our hero” and reiterated that “there is justice.” 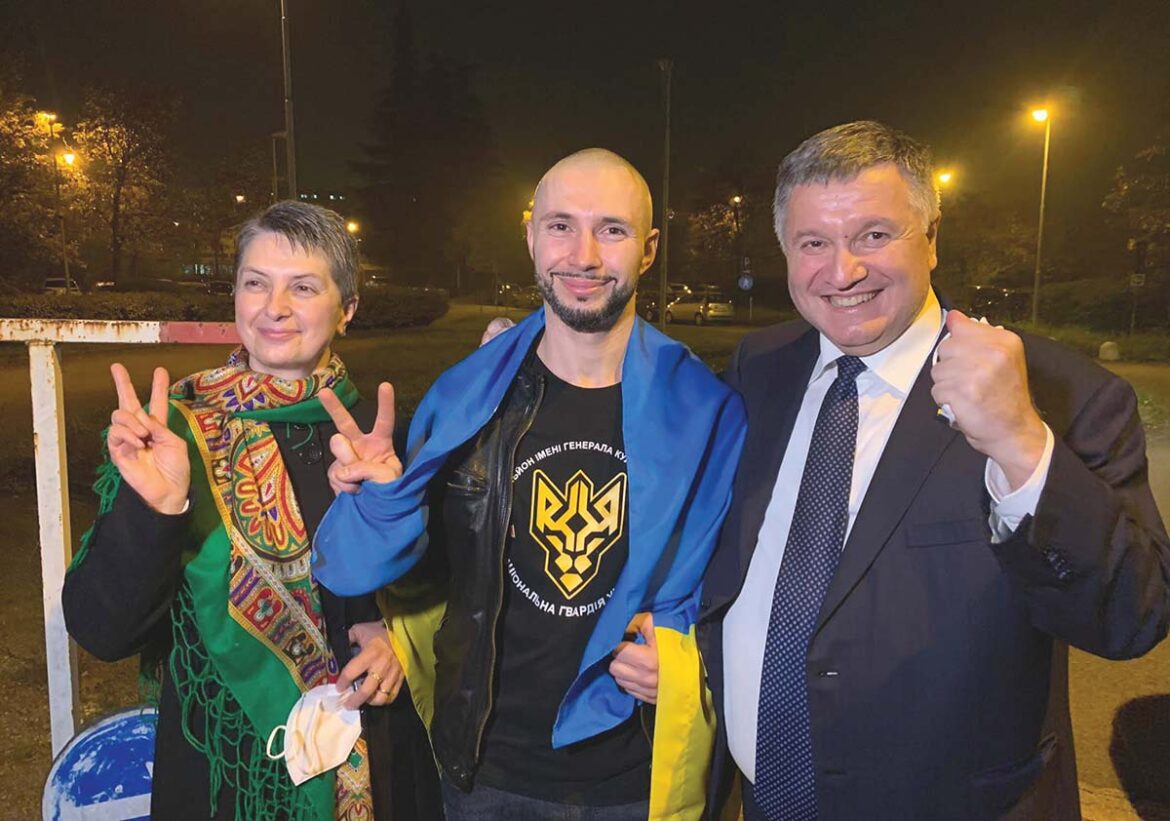 At the landing strip in Kyiv, Mr. Markiv said he would continue serving in the National Guard but will first spend time with his wife, whom he hasn’t seen in more than three years.

He also didn’t rule out suing the Italian government for his wrongful conviction, but said he will first consult with lawyers after the full text of the ruling is published.

The family of the Italian victim, Andrea Rocchelli, and prosecutors have not stated whether they will appeal the Milan Court of Appeal’s acquittal of Mr. Markiv.

The previous day’s denouement in the case followed four appellate court hearings that started on September 29.

They followed Mr. Markiv’s conviction by a lower court in the same Lombardy region on July 29, 2019, and his sentencing to the maximum 24 years’ imprisonment for allegedly coordinating mortar fire that killed the journalist and his Russian colleague, Andrey Mironov, six years ago near Sloviansk, a town that was controlled by Russian-led forces in Donetsk Oblast.

The Ukrainian government was a co-defendant in the case and was accused of “crimes against humanity” – a charge that Kyiv rejected on jurisdictional grounds. Kyiv also argued that the charge was groundless because it didn’t fit into any definitions outlined by international bodies as “being systemic and repeatedly committed.” Mr. Markiv underscored in his defense that “civilians were never the target of the Ukrainian Armed Forces.”

Mr. Markiv’s defense has maintained that prosecutors never proved the national guardsman was in the vicinity on the day and time the victims were killed and wounded.

Furthermore, his lawyers, Raffaele Della Valle and Donatella Rapetti, provided evidence that suggested the victims were caught in a crossfire and, given their position in a wooded ravine behind a railroad passageway of cargo trains, were not visible from the nearest point where Ukrainian soldiers were based – more than 1,700 meters away.

At best, Mr. Markiv’s defense argued, the evidence prosecutors had provided was circumstantial and partly based on Russian propaganda and testimony consisting mostly of hearsay.

Only one witness of the events, the wounded French journalist, William Roguelon, said he surmised the firing was coming from the Ukrainian position atop a hill that overlooked the area. He gave the testimony three years after the tragic events, leading the defense to question the accuracy of his recollection.

The defense also pointed out that Mr. Roguelon never suspected Mr. Markiv of involvement in the crime and even visited the national guardsman when he was wounded in a hospital and subsequently asked him for a bulletproof vest that the Ukrainian gave him. 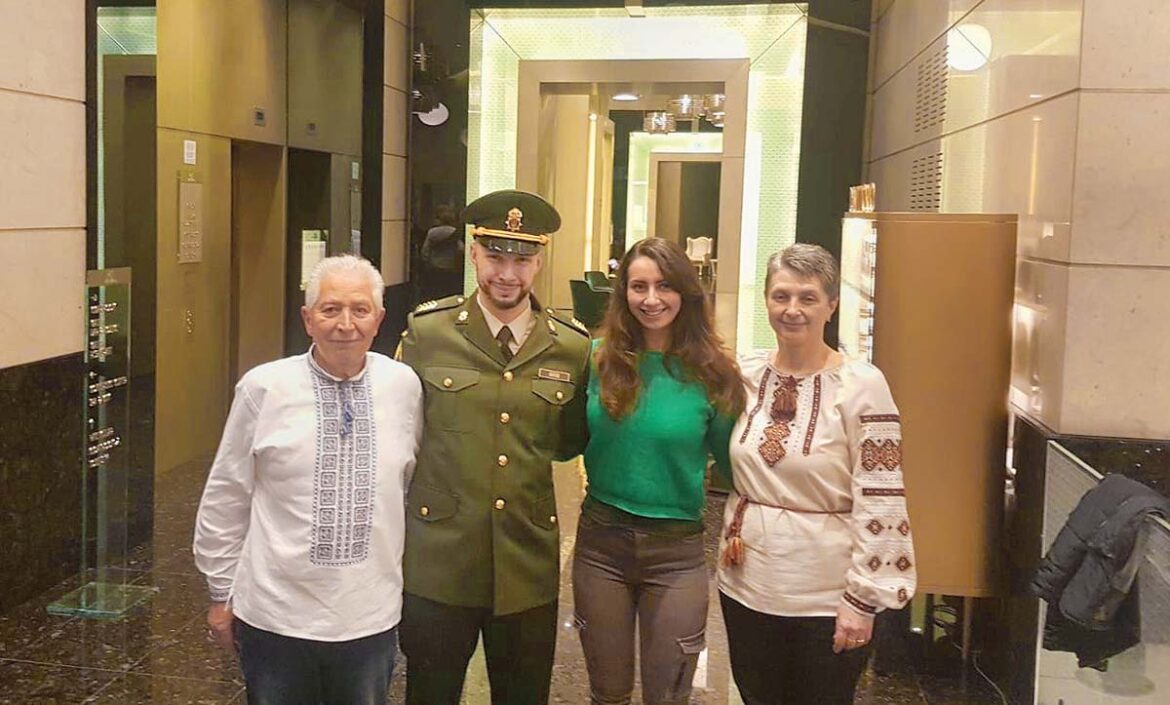 Ukrainian National Guardsman Vitaliy Markiv is reunited with his mother, Oksana Maksymchuk (far right), sister, Ruslana Markiv, and stepfather, Manlio Rogani, upon being released from a maximum security prison in Milan on November 3.

One article, published on the eve of the final hearing by Ukraina.ru implicated Mr. Markiv and called him a “Nazi.” The Russian-language website, which often reports news about Ukraine with a pro-Kremlin slant, published a picture found on the Ukrainian’s phone posing with comrades-in-arms with a flag bearing a swastika. Mr. Markiv, and others who served with him, have stated the flag was a war trophy captured from Russian-led militants during fighting in Donetsk Oblast.

However, in the weeks leading up to the final appellate court hearing, Italian media started publishing articles that questioned the prosecutor’s version of events while pointing to Mr. Markiv’s innocence. They included: Libero, Milano Today, Linkiesta and Il Foglio.

In addition, a working group consisting of the Russian Memorial Human Rights Center, of which Mr. Mironov was a member, the Ukrainian Center for Civil Liberties and international lawyers from the France-based Centre de la Protection Internatio­nale (CPI) delivered a preliminary assessment that favored Mr. Markiv’s defense.

“The lack of objectivity [by prosecutors] was doubtless influenced by the very suspect reliance on propaganda sources of information about the events in Ukraine in May 2014,” the KHPG stated on November 4. “It is therefore an immense relief that the Italian justice system has, albeit belatedly, taken a different turning.”

Mr. Markiv was arrested at the Bologna airport on June 30, 2017, while on leave from service during a trip to visit his mother, with whom he had lived in Italy for nearly 10 years before returning to Ukraine to join the Euro-Maidan movement in December 2013.

After Russia forcibly seized Ukraine’s Crimean peninsula in early 2014, he joined the National Guard and saw combat near Sloviansk. The Italian journalist was on the Russian-controlled side when he died and was accredited with the self-proclaimed, Kremlin-backed “separatists.”