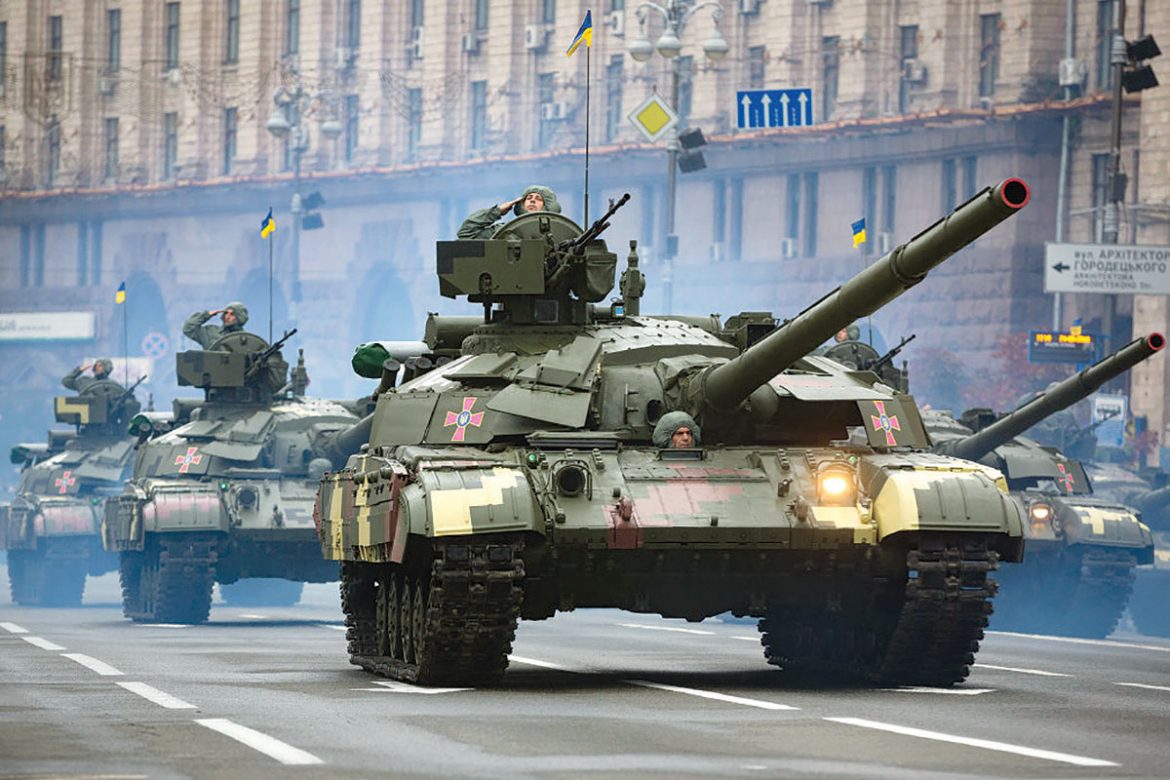 KYIV – Perhaps the first Ukrainian city to hear the national anthem on Independence Day was Russia-occupied Donetsk. At about 6 a.m. hidden loud speakers started blaring the first words of the anthem, “Ukraine hasn’t perished yet.” The daring audio performance lasted about 30 minutes as startled passersby gazed in bewilderment at the central intersection of Artem and Tamansky boulevards, according to a closed-captioned video posted by Novosti Donbass, an independent news outlet based in the Donetsk Oblast city of Sloviansk.

That defiance toward ceaseless Russian aggression was on full display along Kyiv’s main thoroughfare of Khreshchatyk Street on August 24 during the country’s 25th year of renewed independence. President Petro Poroshenko had ordered a military parade for a third consecutive year intended to underscore the nation’s military capability. But it was the first year that highlighted hardware rolled fresh off factory floors and newly designed uniforms, marking Ukraine’s efforts to shed its outdated Soviet past.

After more than 4,000 armed forces units marched past, some equipped with Ukraine-made Tavor automatic rifles, and 200 armored vehicles rumbled by, Mr. Poroshenko said: “Our main guarantor is the Ukrainian armed forces.”

Noting that Ukraine spends about 5 percent of its gross domestic product on defense, the president said, “from this parade, our international partners will get the message that Ukraine is able to protect itself, but needs further support.”

It was in reference to Russia’s military spending, which is more than nine times what Kyiv spends and whose army is more technologically advanced. The West has so far declined to give Ukraine lethal weapons fearing what military experts call “escalation dominance” on the part of Russia.

Several thousand spectators were on hand amid an overcast sky of menacing rain clouds, many wearing embroidered attire, others t-shirts bearing the national trident symbol or blue-and-yellow colors.

“Thanks for your patriotism, thanks for your protection,” he said. “Ukraine’s independence was supposed to end at the 23rd anniversary (when Russia invaded Ukraine), but thanks to your sacrifice, it didn’t and that’s why we’re celebrating the 25th anniversary year.”

Meanwhile, indoors at Kyiv’s city hall, 25-year-old Kateryna Horonzhuk, a PhD student of international relations from Rivne, perused Ivan Marchuk’s “Genotype of Liberty” art show. When asked what it means to be a Ukrainian and wear national embroidery, she said: “I came dressed in national attire because I’m absolutely not ashamed of who I am. Just because we live in difficult times, it’s not a reason to give up for if we all give up, then Ukraine will cease to exist. We as Ukrainians don’t have the right to give up…and I don’t only put it (embroidered clothing) on once a year.”

Indeed, a poll of 75 political and civil society experts conducted this month by Kyiv-based policy center Democratic Initiatives, found that among the top five achievements that Ukraine made over the last 25 years were improving defense capabilities and the preservation of statehood.

Safeguarding a nation-state has come at a cost though.

Mr. Poroshenko noted during his speech that more than 2,500 soldiers have died fighting in easternmost Donbas since April 2014, when a Moscow-engineered armed uprising took over key cities and buildings. The United Nations estimates that a total of 10,000 have died altogether, including civilians and combined Russian-separatists. And more than 1 million have been forced to flee their homes in-country, with hundreds of thousands more leaving for neighboring Russia or elsewhere.

A soldier from the Freedom Legion that is affiliated with the nationalist Svoboda Party, Oleh Dyachenko, died from mortar fire near Zaitseve in Donetsk Oblast, about 30 kilometers from occupied Horlivka, said Oleh Tyahnybok who heads the political party.

“The mortar landed directly in the trench shelter where three soldiers were, one of whom was 41-year-old Oleh (Dyachenko),” Mr. Tyahnybok said on his Facebook page. The slain soldier is survived by his wife and 11-year-old daughter, the party leader added.

Altogether, Ukrainian forces faced 85 attacks on Independence Day, the Defense Ministry reported on August 25. Tanks and heavy artillery fire were used, including 152- and 122-millimeter caliber shells, and 120- and 82-millimeter mortars.

Back outdoors, a group of relatives whose family members died in the Russia-instigated war, as well military and civilian volunteers, medics, chaplains, and former Maidan activists, held a separate “March of the Unvanquished.”

Also taking part in central Kyiv, the marchers held portraits of their slain relatives and headed toward Instytutska Street, where the majority of the more than 100 killings took place in late February 2014 at the height of the Euro-Maidan Revolution. It ended in a solemn prayer as rain already fell, which was preceded by a solemn song by folk rock singer Anastasia Prikhodko.

“It is music that unites us – groups like Okean Elzy, the late Skryabin…they unite Ukrainians in Lviv, Odesa, and Kharkiv, for example,” said PhD student Ms. Horonzhuk, now standing outside on Khreshchatyk Street. “If earlier I thought all Ukrainians should exclusively speak Ukrainian, then over the last few months I understood that it shouldn’t be that way. There’s also Russian speakers, and that’s a phenomena that evolved historically and we can’t simply make that go away. There are many Ukrainian patriots among Russian speakers.”

Standing on another main street, Velyka Vasylkivska, that dissects Kreshchatyk, was Serhiy Horetsky, a medical equipment supplier. He also spoke of what it means to be Ukrainian.

“It’s difficult to say where Ukraine stands today…Belief in our future of becoming fully independent and for Ukraine to become a nation is what defines me as a Ukrainian,” he said.

He got into his vehicle and headed south toward the city’s Parkovka recreation area further south near Ocean Plaza mall where a live music festival was in full swing. Groups like Odyn v Canoe, Gapochka and The Velvent Sun were performing until midnight. Writers and poets like Artem Polezhaka and Ella Yevtushenko were giving readings and lectures. And a street food festival was underway.