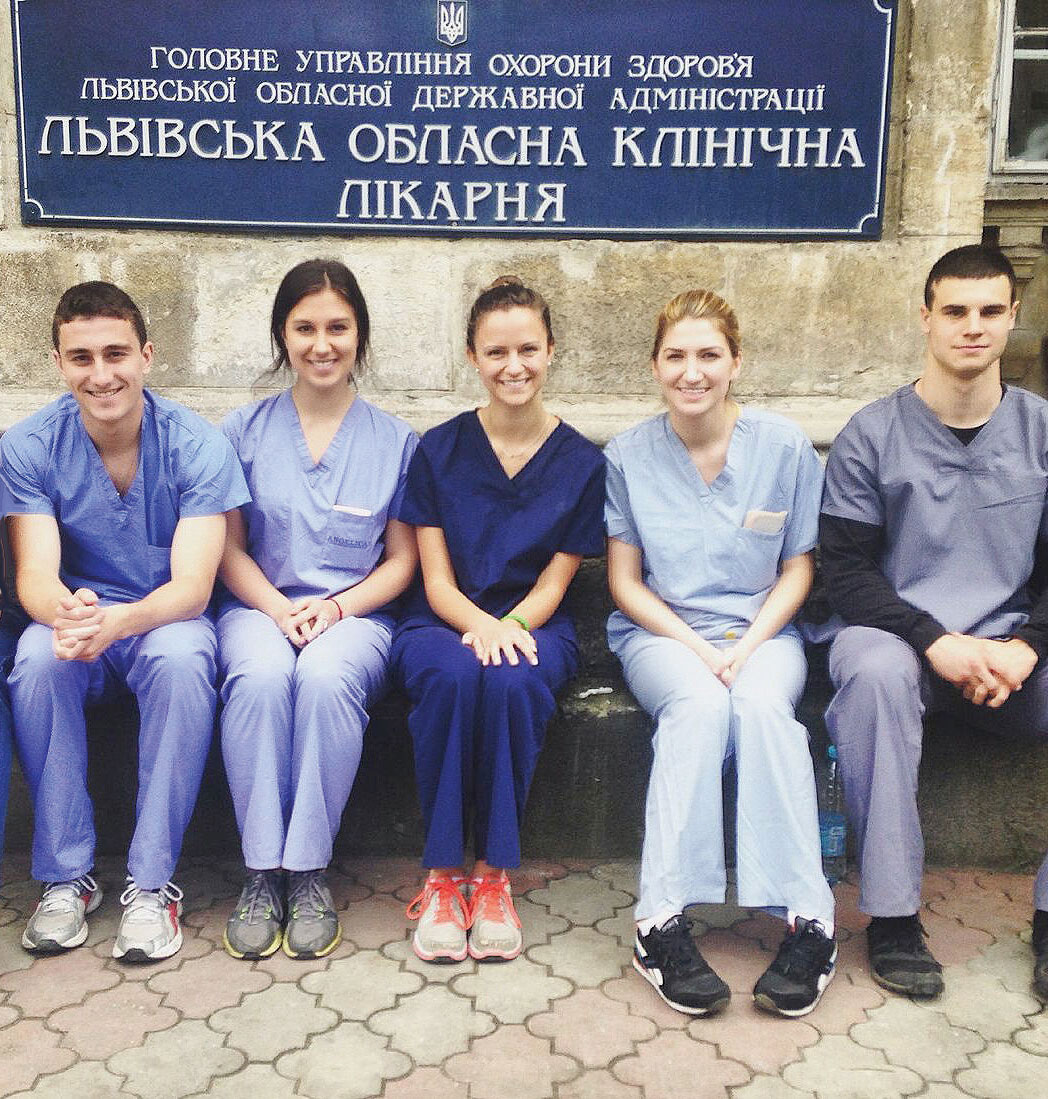 NEW YORK – Our Ukrainian society would not be sustainable without the influx of new community activists from the younger generations of Ukrainian Americans. In the past few months, six young adults, raised and educated in the United States, decided to make a personal commitment to apply their skills and interests to help victims of war and others in need of medical support in Ukraine. Their story is one of passion and patriotism, and how much a few individuals can achieve when working as a team.

A grassroots project called Medical Aid for Ukraine was initiated this spring by Areta Bojko, 23, and Solomiya Grushchak, 22, when they decided to raise funds for medical assistance for war-wounded in Ukraine. Both Areta and Solomiya are pursuing careers in medicine, and were raised in the spirit of community service as Plast scouts. They also wanted to enlist the support of others who wanted to help Ukraine, particularly from their generation, through a website that allowed immediate and transparent insight into the progress of the project.

As a first step, Areta and Solomiya created GoFundMe website pages with the intent of raising $2,000 and $2,500, respectively. In a very short time they exceeded their goals and raised just under $8,000 collectively. The funds were to be used to purchase medical equipment and supplies for Ukrainian medical institutions.

The next steps were two-tiered: to travel to Ukraine to volunteer in hospital settings, and to develop a purchasing process that identified and addressed the medical needs of war-wounded soldiers, their families and others on an ongoing basis. 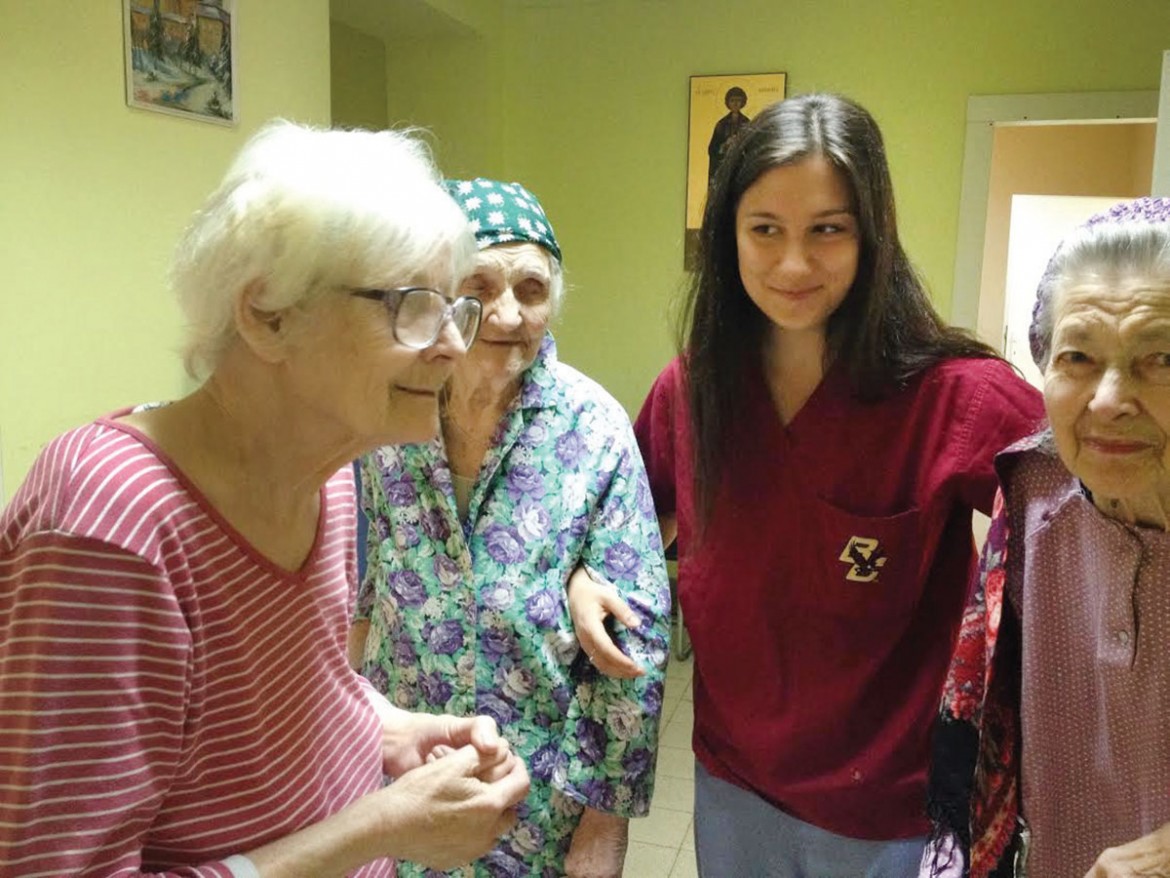 Areta Bojko with patients at the Metropolitan Andrey Sheptytsky Hospital.

Collaborations were established with three major medical facilities in Lviv. The first was the Metropolitan Andrey Sheptytsky Hospital, under the guidance of Father Andriy Lohin. The Sheptytsky Hospital is primarily a palliative care unit that administers to terminally ill patients. Another facility was the Military Medical Clinical Center of the Western Region, which provides medical care for military personnel wounded in the war in eastern Ukraine. Dr. Rostyslav Davidov was their primary contact, while Lesya Kalandyak, a volunteer at the hospital, organized the day-to-day assignments. The group also worked at the Lviv Regional Clinical Hospital under the supervision of Dr. Vitaliy Averchuk, chief cardiothoracic surgeon.

The six volunteers arrived in Lviv in late May, paying their own transportation and living expenses. They rotated as two teams through different assignments in the three hospitals. At the Sheptytsky Hospital, the volunteers provided direct care to elderly and dying patients, often suffering from dementia, Parkinson’s disease, strokes or paralysis. They fed patients, conversed with them, transported them to hospital stations and assisted in the care of bed sores. At the military hospital, the two teams were assigned to the rehabilitation wing. One project involved cleaning and refurbishing a collection of old wheelchairs and walkers, resulting in over 50 useable mobility devices. At the Lviv regional hospital, Dr. Averchuk took a personal interest in providing the volunteers with real medical experiences: he had them participate in over a dozen open heart surgeries as observers in the operating rooms.

In addition to hands-on work, the volunteers provided the hospitals with needed equipment and supplies. The first major item purchased with funds donated on the GoFundMe site was a Stryker sternal saw and kit, which is used in open heart surgery. The donated Stryker saw replaced a less efficient and more invasive Gigli wire, and was presented to Dr. Averchuk and staff of the Lviv Regional Clinical Hospital on June 11. “This was a huge moment for both us and the hospital,” wrote Areta in one of her blog updates. (A video of the presentation can be found on the GoFundMe site. See the link at end of this article.)

In another example, a wounded soldier with a skull-deforming head injury could not afford the necessary titanium cranial prostheses, and the surgery was put on hold. The group worked with the military hospital and purchased the mesh plates on behalf of the soldier. Upon hearing that the surgery could now take place, the soldier was deeply moved by this generosity and expressed his heartfelt gratitude. He successfully underwent cranioplasty the following day.

In collaboration with the three hospitals, the GoFundMe donations were used to purchase surgical tools, blood-pressure cuffs, catheters, disposable diapers and other items for a total of almost $8,000 of equipment and supplies.

An important goal was to maintain complete transparency in all purchases, so the group created a process of accountability, delivery and financial review that demonstrated secure fiduciary responsibility. The volunteers established working collaborations among the hospitals, suppliers and banks, and reported all transactions on the GoFundMe site.

The group members were invited to make several presentations to their host communities. At the Metropolitan Sheptytsky Hospital, staff members wanted to understand what had motivated these young adults to come to Ukraine, and how was it possible to be “raised Ukrainian,” learning the Ukrainian language and heritage while living in the diaspora.

The audience was also interested in how Ukrainians in the U.S. view the war in Ukraine. One staffer’s feedback was that diaspora Ukrainians should “make people aware that we want democracy, we are our own separate nation with our own language, traditions and territory.” Soldiers, on the other hand, requested “weapons and armaments, and political support,” reported Mark.

The six volunteers worked for three weeks in staggered time frames, and returned to the United States feeling both exhilarated and humbled by their experiences. At every step, the volunteers were warmly welcomed by their hosts. People who met them often commented on their command of Ukrainian and dedication in coming to Ukraine.

“We were overwhelmed by the sheer generosity of everyone we met, in the true meaning of the culture of ‘shchedrist,’ ” said Mark. They had not expected to have so much personal contact with patients, or such upfront exposure to surgeries. It was incredibly fulfilling for the group to see how much of a morale booster their presence was for staff and patients alike.

Throughout the course of the three weeks, the team developed an extraordinary respect for the medical staff at the three hospitals, for the high quality of care that was provided despite the scarcity of resources. “The work ethic of the personnel we interacted with was inspiring. We were constantly impressed by their expertise and resourcefulness,” Areta observed. “Anything we send them will go a long way.”

Moving forward, the group will continue to work with its collaborators and hospitals to purchase needed items. The group feels it has developed a viable, workable and secure process for identifying what is necessary, disbursing the funds, documenting the purchases, and paying for supplies in an accountable and transparent manner. And, the group members feel confident that the relationships they developed are trustworthy in sending and delivering equipment to these hospitals.

These young activists truly exceeded their own goals on all levels. Not only did they succeed in raising money and push forward into uncharted territory, they were able to engage and inspire their fellow Millennials in supporting the Ukrainian cause. (For more information readers may contact Mark at oconnell92@gmail.com.)