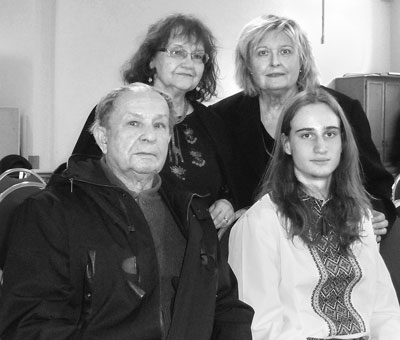 MONTREAL – Joining communities worldwide, Montreal marked the 81st anniversary of the Famine-Genocide in Ukraine on Saturday, November 22, remembering the millions deliberately starved to death in 1932-1933 by Stalin and his regime.

The program was organized by the Ukrainian Canadian Congress (UCC), Montreal branch. It followed a requiem service officiated by the Rev. Wolodymyr Kouchnir of the Ukrainian Orthodox Church, together with the Revs. Ihor Oschipko and Yaroslav Pivtorak of the Ukrainian Catholic Church, and held at St. Sophia Cathedral.

Among the 100 attending the solemn remembrance were Famine survivors and children of survivors, as well as members of Plast Ukrainian Scouting Organization and the Ukrainian Youth Association, students from the Metropolitan Sheptytsky Ukrainian Saturday School and other community members.

The guest speaker was historian Roman Serbyn, a specialist on the Holodomor. He stressed the importance of recalling the pivotal contribution made by Raphael Lemkin in coining the term “genocide” and applying it to include the 1932-1933 Famine. Prof. Serbyn noted how attempts by Russia to destroy Ukraine as a nation date back to the times of Tsar Peter I and continues today “with Putin, a Russian imperialist, intent in destroying Ukraine as a nation.”

Pavlo Chornous shared recollections passed onto to him by his grandmother, who barely managed to live through the Holodomor, losing many family members through forced starvation.

Ms. Hawryluk mentioned how Montreal has been in the forefront of raising public awareness of the Holodomor with the organization of the first international conference on the Famine-Genocide in 1983 by Prof. Serbyn at the University of Quebec in Montreal (UQAM). The conference was filmed by Yurij Luhovy and the tapes of the conference are being restored.

The evening concluded with the singing of the Ukrainian national anthem and the passing of blessed pieces of bread as a reminder of how precious this life-sustaining food is and how confiscation of food was used as a weapon in the breadbasket of Europe to try and destroy Ukraine as a nation.

A display of books about the Holodomor written over the decades in the diaspora and more recently in Ukraine was organized by the president of UCC Montreal, Zorianna Hrycenko-Luhova.