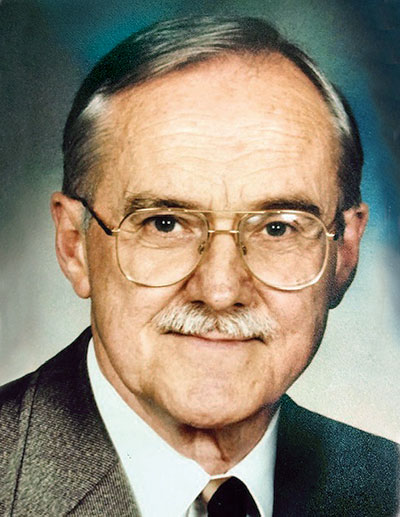 TORONTO – With the death of Morris John (Myroslav Ivan) Diakowsky on November 8 at the age of 92, the Ukrainian global community lost a distinguished figure, widely respected for his effective leadership, professionalism and wise counsel.

Throughout his long life, Mr. Diakowsky was dedicated to public service. He valued faith and family, culture and education, and left a lasting legacy in these areas through his career with Radio Liberty, his involvement in numerous Ukrainian organizations, notably the Ukrainian Orthodox Church and the Canadian Foundation for Ukrainian Studies (CFUS), as well as through his activities as one of the world’s foremost bandura experts.

Mr. Diakowsky served as the CFUS president in 1991-1997 and as its director until 2002. CFUS supports Ukrainian studies publications, such as the Encyclopedia of Ukraine, the Hrushevsky Translation Project and other Canadian Institute of Ukrainian Studies initiatives.

“During his term as president, Mr. Diakowsky was responsible for setting up many if not most of the program funds we have today,” said Olga Kuplowska, the CFUS’s current president. “His knowledge and expertise in governance matters, as well as his attention to detail, ensured that all agreements with universities were solid, robust and would withstand the test of time.”

Mr. Diakowsky was born in Montreal on January 20, 1927, to Franko and Theophilia Diakowsky. After he graduated from high school in Montreal, his family, which by then included his younger brother Gene, moved to Winona, a small community in Ontario. Mr. Diakowsky attended McMaster University in nearby Hamilton, where he completed a master’s degree in English literature and philosophy.

While in university and in the Canadian Officers’ Training Corps, he served as a tank commander and artillery instructor in the Princess Louise Dragoon Guards, attaining the rank of lieutenant.

Mr. Diakowsky started his career in Ottawa with Canada’s Department of Citizen­ship and Immigration, then moved back to Montreal, where he was an announcer and producer with the Canadian Broad­casting Service’s International Radio Service.

In 1954, he relocated to New York City to work for Radio Liberation, later renamed Radio Liberty – an initiative of the American Committee for the Liberation from Bolshevism – which broadcast news and cultural programming on shortwave into the Soviet Union. Mr. Diakowsky, who was known as Moe in his broadcasting and civil service career, became Radio Liberty’s chief translator and then moved to its headquarters in Munich, West Germany, where, over 15 years, he held various positions, ultimately heading a 200-person department producing programming in 17 non-Russian languages.

In Munich, he was active in local Ukrainian community life and pursued one of his life’s main interests  the bandura, Ukraine’s national instrument. At that time, the future of the bandura, which had been historically played by Ukraine’s wandering bards, was in peril. Bandurists, accused of fostering nationalism, had been murdered by the Soviet regime. Few banduras remained, and only a handful of people worldwide knew how to construct them.

Mr. Diakowsky set out to learn. He studied under bandura master Zinoviy Shtokalko and wrote letters to Simon Lastovych, a bandura-building expert. Mr. Diakowsky constructed his first bandura in 1955 and led workshops with young people in Germany to teach them. He continued teaching the art of bandura-building for decades.

While in Munich, Mr. Diakowsky met Daria Wyshniowsky, a young Ukrainian Canadian from Ontario. They married in September 1967 in Grimsby, Ontario, where their parents (both the Diakowskys and Wyshniowskys) had resettled, and they went on to have four children: Larissa, Franko, Roxolana and Michael.

Having been a bachelor for four decades, Mr. Diakowsky approached family life with the same dedication he had hitherto applied in all other spheres. He and his wife moved back to Canada so the children could grow up nearer to their grandparents and other relatives and friends.

In Toronto, Mr. Diakowsky built a career in the provincial civil service, while his wife worked as a teacher. A power couple with many shared interests, they complemented and supported each other in their endeavors. Over the years, the Diakowskys took leadership roles in numerous organizations, including the St. Demetrius Development Corp., which spearheaded the construction of a long-term health care and seniors’ centers, and St. Vladimir Institute, a cultural center and student residence.

The Ukrainian Orthodox Church of Canada also greatly benefited from Mr. Diakowsky’s volunteerism. In his youth, he read the Apostle in Church, arranged music for the choir, and was active in the Ukrainian Orthodox Youth Association. Later, he was a parishioner of St. Demetrius Ukrainian Orthodox Church. He served on the board of St. Andrew’s College, the theological school at the University of Manitoba. He was a member of the Order of St. Andrew, a group of distinguished laity who pledge to act as missionaries, defend the faith and serve Canada, as a homeland of religious freedom and democracy.

Mr. Diakowsky made a significant contribution to the Church’s intellectual heritage by translating and editing key documents and publications, an activity he continued into his 90s. He translated into English a volume of the history of the Orthodox Church and was assistant editor of “The Good Shepherd Prayer Book” (2013) and “The Liturgy Pew Book and the Faith” (2018).

With his resonant voice, Mr. Diakowsky was a natural chorister. He helped organize a course for cantors and sang in the St. Demetrius Church Choir as well as with the Prut River Boys, who came together at Christmas to carol in support of worthy causes. Many of the “boys” were decades younger, but with his quick wit and joie de vivre, Mr. Diakowsky had no trouble keeping up.

Mr. Diakowsky mentored those younger than him and buoyed up those senior. For years he volunteered biweekly at the Ivan Franko Home for the Aged, reading to the residents and leading them in song while playing the bandura.

He delighted in family life and was thrilled with the arrival of grandchildren Katya, Danylko, Sabina and Keaton. It was a blessing that in his few final days, spent in hospital after a very brief illness, his beloved wife, Daria, and their four children kept vigil, even singing at his bedside.

The funeral, held on November 13 at the Ukrainian Orthodox Chapel of All Saints of Ukraine, in Oakville, Ontario, was befitting a life of long service and dedication to his Church and community. The community came out in great numbers to pray for his soul and pay their final respects. Officiating clergy included Metropolitan Yurij and Bishop Andriy, as well as numerous priests: Fathers Walter Makarenko, Bohdan Sencio, Mykolaj Sidorski, Bohdan Hladio, Gregory Mielnik, Jaroslaw Buciora and Myroslaw Shmyhelskyy.