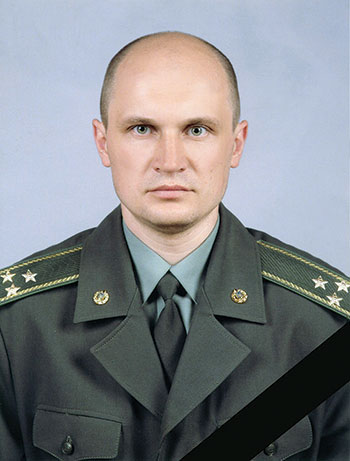 Col. Yuriy Voznyi of the Security Service of Ukraine.

KYIV – Three high-ranking Ukrainian service personnel have been killed in car explosions in the past three months, leading some experts to believe that Russia is specifically targeting an emerging cadre of proven field leaders.

Security Service of Ukraine (SBU) Col. Yuriy Voznyi became the latest victim on June 27. A passenger vehicle in which he was sitting exploded in the Kostiatynivka district of Donetsk Oblast, according to the SBU.

The military prosecutor’s office is investigating the death and has classified it as a terrorist act. Meanwhile, the SBU said Col. Voznyi’s death marks the 23rd casualty that the agency has suffered in Russia’s unprovoked war against Ukraine, which started with the illegal annexation of Crimea in March 2014, with the invasion of Donbas commencing a month later.

The same day, army Col. Maksym Shapoval was killed in a car explosion in Kyiv, the Defense Ministry reported. He had been collecting evidence of Russian war crimes to substantiate Kyiv’s case against the Kremlin at the International Court of Justice at The Hague.

Col. Shapoval was also the commander of a deep reconnaissance division within the armed forces. According to the UNIAN news agency, he had planned reconnaissance raids deep into enemy territory in Russian occupied Donbas and also took part in some of them. He was visiting Kyiv fresh from a stint on the war front.

Another SBU officer, Lt.-Col. Oleksandr Khararberiush, who was the deputy head of the local counterintelligence unit in Donetsk Oblast, died in a car blast on March 31 in the Azov Sea coastal city of Mariupol.

He had been a thorn in Moscow’s side, as he went after Russian saboteur groups and their Ukrainian collaborators in the region, Yuriy Butusov has reported for Censort.net, the publication’s chief editor and main war correspondent.

“This was obviously a vendetta by the Kremlin,” Oleksiy Melnyk, co-director of foreign relations and international security programs for the Razumkov Center policy center, told The Ukrainian Weekly by phone. Over the years, Col. Khararberiush “made the enemy’s life really hard.”

Put together, the three deaths in car blasts “are obviously a trend,” added Mr. Melnyk. “They were coordinated from abroad, most likely by Moscow, but not necessarily carried out by Russians… it could have been done by Ukrainian [collaborators].”

In a similar manner, a Belarusian journalist, Pavel Sheremet, who was living and reporting in Ukraine, died in a car explosion on July 20, 2016, in Kyiv during his morning commute to work.

His killing remains unsolved. Journalist-turned-member of Parliament Mustafa Nayyem said at the time that it was “an ordered hit.”

“One can kill many ways – quietly, insidiously without… drawing attention to the process,” the national deputy said on Facebook.

The United Nations’ latest report says that over 10,100 people – a “conservative” estimate – have been killed in Russia’s war against Ukraine and up to 2 million people have been uprooted from their homes.