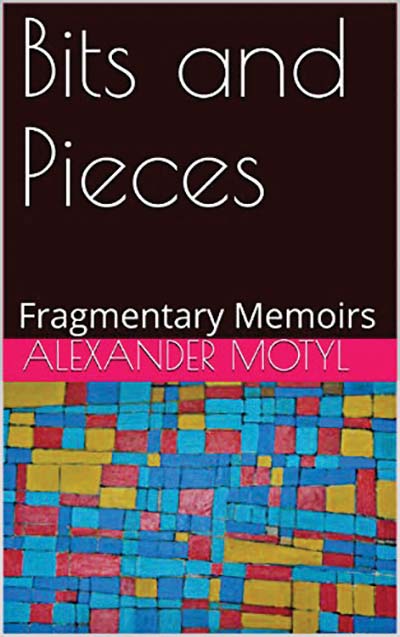 The cover of the Kindle e-book edition of Alexander Motyl’s “Bits and Piece: Fragmentary Memoirs.”

As the author writes in the foreword, “I’ve never wanted to write a memoir, and, as ‘Bits and Pieces’ demonstrates, I haven’t. These ‘fragmentary memoirs’ consist of a handful or two of semi-biographical essays and interviews, interlaced with my drawings, poems and paintings, and with a novella (which may have more to say about me than the non-fiction pieces) thrown in for good measure. Some things are discussed in great detail; others are passed over in silence: readers will have to decide which. All memoirs are selective remembrances full of inconsistencies, lacunae, and contradictions; this one is no different.”

In particular, Prof. Motyl’s “fragmentary memoirs” focus on art, writing, identity and Sovietology, in general and as experienced by the author. Particular attention is paid to the author’s relationship with New York’s Lower East Side, his love of cafés, his obsession with Fall River, Mass. (where his mother was born), his collaboration with Andy Warhol’s Superstar Ultra Violet, and his emotional and intellectual engagement with Ukraine, the Soviet Union and Vladimir Putin at Columbia University’s Harriman Institute.

Prof. Motyl (born in 1953 in New York) is a writer, painter and professor. Nominated for the Pushcart Prize in 2008 and 2013, he is the author of nine novels, “Whiskey Priest,” “Who Killed Andrei Warhol,” “Flippancy,” “The Jew Who Was Ukrainian,” “My Orchidia,” “Sweet Snow,” “Fall River,” “Vovochka” and “Ardor,” and a collection of poetry, “Vanishing Points.”

Prof. Motyl’s artwork has been shown in solo and group shows in New York City, Philadelphia and Toronto and is part of the permanent collection of The Ukrainian Museum in New York and the Ukrainian Cultural Center in Winnipeg. The laureate of the 2019 Omelian and Tetiana Antonovych Foundation Award, he is the author of seven academic books and numerous articles and a contributor of a monthly column to the Ukrainian magazine Ukrainskyy Tyzhden.

“Bits and Pieces” is available on Amazon.