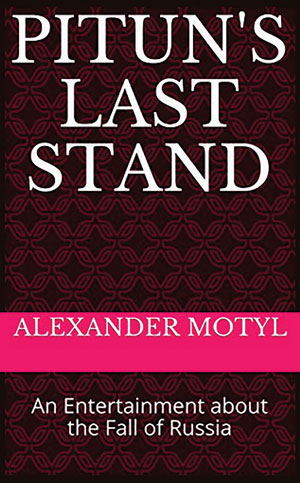 The time is the near future. Steven Smith, a New York City-based journalist, travels to Tallinn to cover Russia’s invasion of northeastern Estonia. Upon arriving in the country’s capital, he learns that the invasion – intended as a quick, glorious war by Russian dictator Vladimir Pitun (sic) – has unleashed counter-offensives by a score of non-Russian nations against Russia. Together with his Estonian colleague, Smith travels to Moscow, where he witnesses the destruction of much of Red Square by Chechen terrorists. His host in Moscow, a retired KGB agent, commits suicide out of despair that Russia is falling apart. As it in fact is: Ukrainians, Kazakhs, Lithuanians, Poles, and many other nations have taken the initiative and are driving back Russia’s armed forces, increasingly decimated by growing numbers of desertions. Amid all this mayhem, Smith discovers that Pitun has fled the country and that a rogue general by the name of Fedotov, who claims to possess nuclear weapons, declares that he will use them to reestablish the Russian state under Pitun’s leadership.

Upon returning to Tallinn, the emotionally and physically drained Smith decides to spend a few days on the Riviera in Nice. A British colleague, Pippa Tumblethwaite, asks if she may join him – “separate bedrooms, of course” – and the two of them board a plane and fly to France. On their first day in Nice, they visit the casino in the posh Hotel Negresco and encounter someone who looks like Pitun at the roulette table. After some digging, they discover that it is in fact the Russian dictator and that he is in Nice rallying Russian émigrés and West European supporters and planning a triumphant return. He offers to meet with them and, during the interview, Steven jokingly suggests that it would be more appropriate for Pitun to follow in Lenin’s footsteps in 1917 and return by train to St. Petersburg’s Finland Station. Pitun agrees and invites Steven and Pippa to join him and be his chroniclers. They set off the following day in a luxurious train that used to serve as the Orient Express.

Several adventures and misadventures, along with a lot of drinking, eating and speech making, take place on the train as it travels northward via Milan, Nuremberg, Berlin and Lübeck, where it is carried by barge to Kaliningrad and thence by rail to St. Petersburg. There the journalists witness Pitun’s last stand…

Alexander Motyl is a writer, painter and professor. Nominated for the Pushcart Prize in 2008 and 2013, he is the author of nine novels, including Whiskey Priest, Who Killed Andrei Warhol, Flippancy, The Jew Who Was Ukrainian, My Orchidia, Sweet Snow, Fall River, Vovochka and Ardor. Vanishing Points is his first collection of poetry. Worries, his second poetry collection, is slated to appear in 2021. He has done performances of his fiction at the Cornelia Street Café and the Bowery Poetry Club in New York City. His artwork has been shown in solo and group shows in New York, Philadelphia, Westport and Toronto and is part of the permanent collection of The Ukrainian Museum in New York and the Ukrainian Cultural Center in Winnipeg. He teaches political science at Rutgers University-Newark and is the author of seven academic books and numerous articles. He is the 2019 Laureate of the Omelian and Tatiana Antonovych Foundation.

According to Academic Influence, Motyl was ranked sixth among the “Top Ten Most Influential Political Scientists Today.”

Pitun’s Last Stand is available on Amazon in both electronic and hard-copy formats.