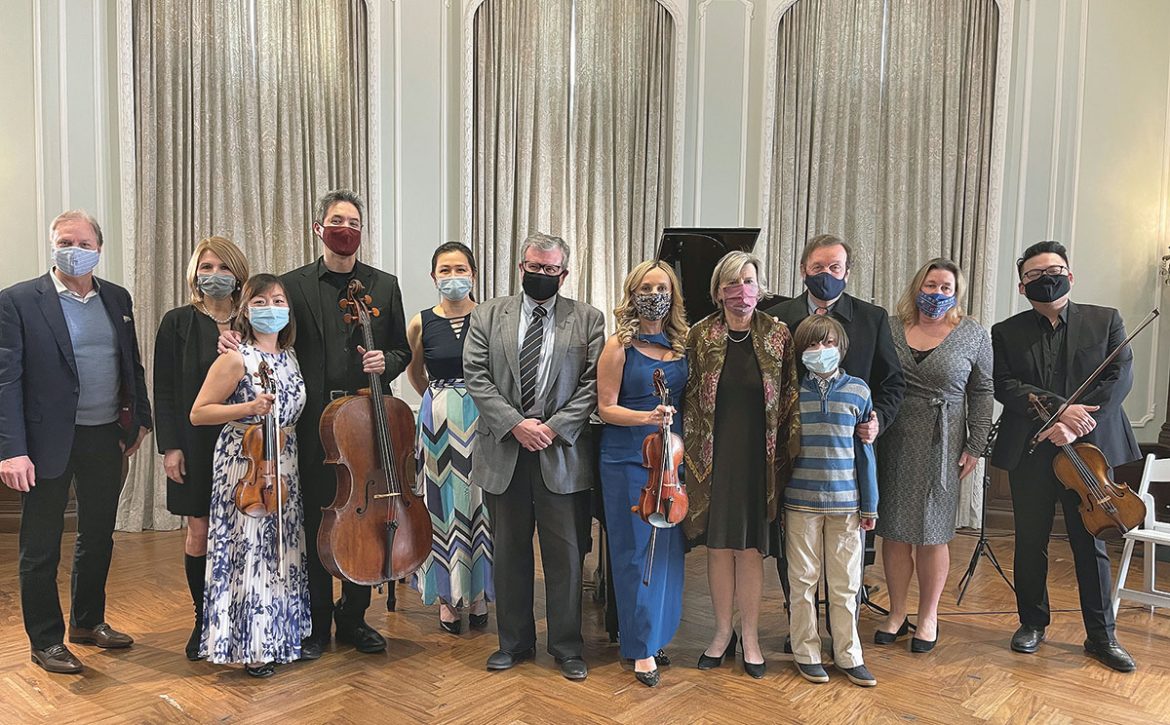 On March 14, the Ukrainian Institute of America (UIA) in New York presented a midday concert titled Dream in Spring. With in-person attendance limited to only 25 people, this Music at The Institute (MATI) event was also professionally produced by OurConcertsLive for home streaming. The concert consisted of a major work by Robert Schumann, a seldom heard gem by Serhiy Prokofiev, and miniatures by Virko Baley.

The streaming began with Archbishop-Metropolitan Borys Gudziak’s greeting to viewers with the advent of spring, expressing his hope for new openness in connecting with others in the coming new life of Easter.

The first composition turned out to be the most compelling performance of the afternoon – Prokofiev’s Sonata for Two Violins, op. 56 (1932). Prokofiev’s work was prompted by hearing a “bad piece” for two violins and piano. His response was to see if he could compose a piece “interesting enough to listen to for 10 or 15 minutes” – for merely two solo violins. The result was a substantial and entertaining four-movement sonata, offering a new world of unique textures and effects transcending the “limitations” of two violins.

Violinists performing this piece must negotiate awkward intervals and wide leaps typical for Prokofiev, and also coordinate the intricate interplay of their parts. Ms. Ivakhiv and Ms. Kang evinced no strain overcoming these technical hazards and blended impeccably.

More notably, they proved sensitive to the changing rhythms and colors, from lyrical to playful to aggressively martial – at times, sounding like a rich string section, while at others, merging onto a single ethereal pitch, spaced over wide octaves.

The longest movement of the work was the last, with mounting rhythmic complexities, darting triplets and slashing chords. Both violin parts were superbly executed, with special commendation for Ms. Ivakhiv’s lovely tone and clear intonation negotiating the stratosphere of the first violin.

The middle section of the program was devoted to composer Virko Baley (who, like Prokofiev, was born in Ukraine).

Ms. Ivakhiv returned with pianist Amy Yang to perform Mr. Baley’s Three Songs without Words (2001), based on poems by one of America’s greatest and most original poets, Emily Dickinson. Three captivating musical miniatures (the second song was barely one minute) echoed the emotions of the poems.

“Love can do all but raise the Dead” spun a soulful violin melody around the piano’s desolate repetitions to convey the sadness in the verse. The last song, “There is a solitude of space,” was similar, reflecting the poet’s meditation on the world within the self. The short middle song, “Oh honey of an hour,” offered a sprightly contrast, with cascading, playful figures mirroring the clever wordplays in the poem, where Dickinson mused on precious time (via metaphor of a flower) and whether she will “deserving be” [bee].

Ms. Ivakhiv got into the spirit of the songs, although the end result was rather fussy. (More convincing is the bassoon version’s approach to the same three songs with its more straightforward and longer phrasing.) If indicated by the composer, superfluous violin effects like no vibrato and questionable shifts in tone color drew attention to themselves, fragmenting the mood.

The poster for Dream in Spring promised “Dumka” and “Hopak” from Mr. Baley’s Partita No. 3 for Violin and Piano (1999). In their place, Ms. Kang and Ms. Yang performed two other movements from the same Partita. The fiery “Intrada” for solo violin was played to the hilt by Ms. Kang, her robust tone well suited to the lightning leaps and virtuosic flourishes. The second selection, titled “Scorrevole” (sliding/gliding), included piano and represented “an inebriated ghost passing effortlessly through objects.” Indeed, the slithering icy figures in the violin and clever banter with piano communicated just that.
The concluding composition was Robert Schumann’s 1842 Piano Quintet in E flat major, op. 44. For this selection, pianist Ms. Yang and violinists Ms. Kang and Ms. Ivakhiv were joined by violist Che-Hung Chen and cellist Thomas Kraines.

Schumann’s Piano Quintet is one of the masterpieces of chamber music literature. Revolutionizing quintet writing, it no doubt inspired Johannes Brahms to create his own magnificent F minor Piano Quintet. (Notwithstanding what was stated at the concert, Schumann needs no exoneration for any “less refined level of skill.” Composer Benjamin Britten singled out Mozart and Schumann among the very finest composers, precisely because of what he deemed their “spontaneity.”)

Schumann composed his Piano Quintet in grand, exuberant Romantic style; above all, it calls for a deep sensitivity to the ebb and flow of its musical structure. In fact, Richard Wagner famously wrote that the “very life of music” is dependent on “flexibility of tempo with a delicacy matching the delicacy of motives.”

While playing with precision and lots of energy, the MATI ensemble generally shied away from opportunities to modify tempos, dynamics and color to express melodic shapes, and underscore bigger forms. This is supremely lyrical and dramatic Romantic music on steroids, after all. And by playing it safe and fairly “straight,” they overlooked chances to create real magic.

For example, in the first movement, the contrasting second theme is marked “sweetly” and offers a lovely duet for cello and viola. In this performance, both players bypassed the opportunity to convey anything extraordinary there. Rather than allowing each phrase to breathe and expand lyrically, they rendered it tame, relentless in speed and tone color – merely pretty sequences. The ensemble often pushed through the remaining movements in a likewise rather prosaic manner.

The second movement March should produce chills in a rapt audience; the desolation of these short phrases quickly evaporates unless carefully nuanced and coordinated. Instead, it had a rushed feeling; moreover, not vibrating made the march sound mundane without any animation to the halting notes. And, even making allowances for dry hall acoustics and close miking, the viola solos sounded brash and curt.

As Wagner suggested, the music itself will reveal how it should breathe and where a lyrical flexibility is appropriate. This process takes time; one must live with the piece and bravely take risks. This is difficult for even expert performers when assembling for a mere few rehearsals.

Overall, the MATI quintet played very well, with exacting ensemble and generally reasonable tempos. Pianist Amy Lynn is a prodigious musician and sensitive accompanist; each string player has a burnished tone that could easily project a solo over an orchestra. The musicians blended well, producing many lovely and genuinely exciting moments, and merited the appreciative applause.

Ms. Ivakhiv also deserves many plaudits for all the hard work she does for MATI, not least for drawing on her talented friends and professional colleagues to perform at the UIA. For her next performance, on March 21, she was scheduled to appear as soloist with the New Britain Symphony Orchestra. In addition, Ms. Ivakhiv is also spearheading a notable future project to record many Ukrainian Christmas carols in new orchestrations.