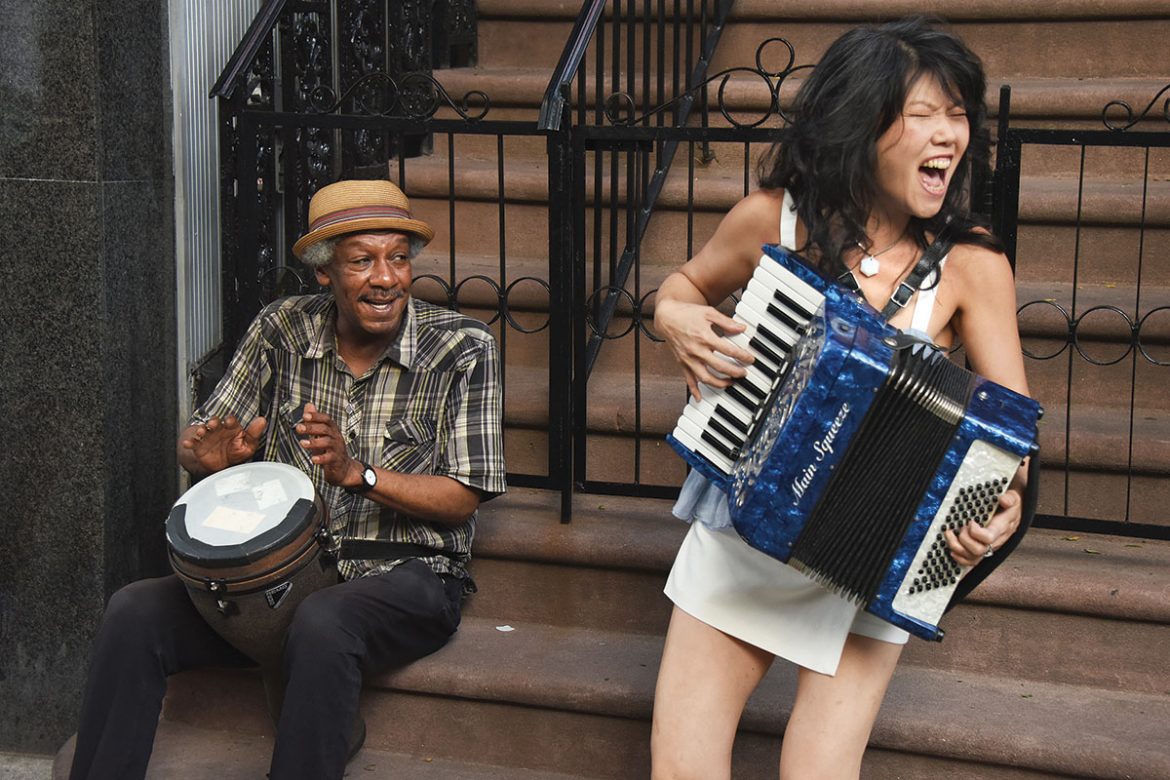 Susan Hwang is joined by Marlon Cherry, who provided percussion and vocal harmonies.

The words to the song – which were translated from Ukrainian into English by Virlana Tkacz and Wanda Phipps – speak of connection to nature and to language. The video features Ms. Hwang in a solo piano/vocal performance.

For the video release event, Ms. Hwang played the song live in a new arrangement with herself on accordion, Lila Eaton on trumpet and Marlon Cherry providing percussion and vocal harmonies. All served to emphasize a connection in recreating the feeling of the words in music.

The poem is part of a series yet unpublished in English translated by Ms. Tkacz and Ms. Phipps. Ms. Hwang interprets the poem as the search for meaning in the act of reading, and finding solace in language. A portion of the poem in English reads as follows:

Ms. Hwang is the founder of the Bushwick Book Club. The group uses literature to inspire songs of all kinds. She has worked with Yara Arts Group in the past and has traveled while performing extensively in Ukraine. One of her latest projects with Yara Arts Group is “Captain John Smith Goes to Ukraine,” about Captain John Smith’s time in Eastern Europe in 1603. She both played accordion and acted in that show.

Ms. Hwang is currently working on “SLAP” with Yara Arts Group. The show is now in development. It tells the story of artist David Burliuk, the father of Futurism, and his travels to Japan and eventually New York City.

Ms. Hwang spoke about her work while in her living room in New York. The first poem of Mr. Zhadan’s that she worked with was “Mushrooms of Donbas,” which she first performed at The Ukrainian Museum in New York City. She spoke of the way that the song offered an opportunity to speak to listeners unaware of the situation in Ukraine regarding the war in the Donbas region and how expressing a Ukrainian identity could be a political act.

“No matter what you’re writing about, you’re taking in, and responding to, the response is uncontrolled. For this song, I sat down at the piano, my hands hit a chord, and then another,” Ms. Hwang said.

She listens for the music in the words, where music already exists within the poem.

Part of what appeals to Ms. Hwang about Mr. Zhadan is his ability to speak of the universal. His work is not geared to a certain type of person. It is geared toward everyone. Ms. Hwang appreciates the depth of attention to all aspects of human existence that Mr. Zhadan brings to his work.

When asked about future plans with Mr. Zhadan’s texts, especially in light of the fact that the poet was recently awarded the prestigious Derek Walcott prize for his book “A New Orthography,” translated by John Hennessy and Ostap Kin, she replied that she would like to continue to bring attention to his work. In its universality, it is important for everyone to hear, she said.