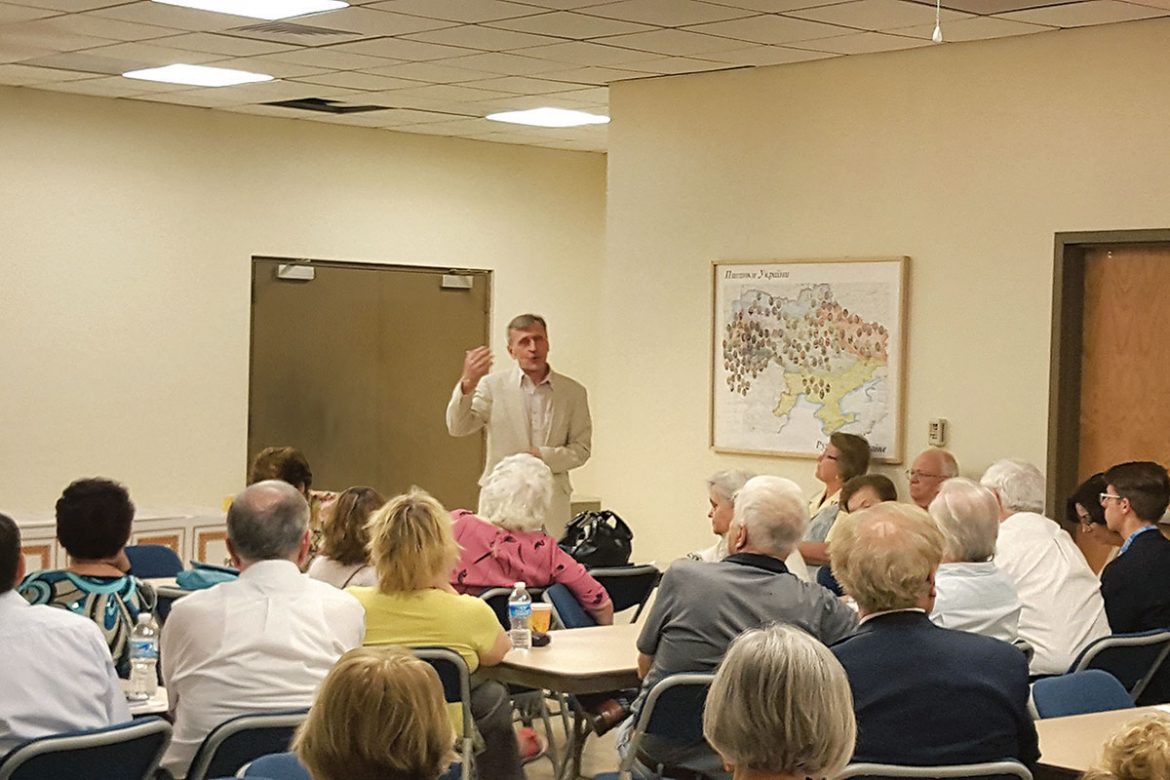 Mykola Riabchuk speaks at the Ukrainian Catholic National Shrine of the Holy Family in Washington on June 12. His lecture was sponsored by the Shevchenko Scientific Society, District of Columbia Chapter.

WASHINGTON – Over 50 people gathered on Sunday, June 12, at the Ukrainian Catholic National Shrine of the Holy Family in Washington to hear internationally known Ukrainian political commentator and essayist Mykola Riabchuk. Sponsored by the Washington chapter of the Shevchenko Scientific Society and delivered in Ukrainian, his lecture was titled “What is Left of ‘Two Ukraines’?  New Divisions and New Connections in Ukrainian Society, 2014-2016.”

The event was chaired by Bohdana Urbanovych, who heads the District of Columbia chapter of the Shevchenko Scientific Society.

Citing a variety of statistics, Mr. Riabchuk demonstrated that the stereotypical conception of “two Ukraines” – one patriotic and pro-Western, the other Russian and pro-Soviet – is misleading. For one thing, the “other” Ukraine does not have a Russian identity, but rather a different kind of Ukrainian identity. For another, the balance has changed in recent years, so that the patriotic and pro-Western portion of the population is now dominant.

Even the idea of NATO accession has gained ground, he noted. Various changes since 1991, especially after the Orange Revolution of 2004-2005, the Revolution of Dignity of 2013-2014, and the Russian invasion of 2014, have affected popular views and practices regarding language, politics and history. After his talk, Mr. Riabchuk fielded a spate of questions and comments.

Mr. Riabchuk is a senior research fellow at the Institute of Political and Nationalities Studies of the National Academy of Sciences of Ukraine and a member of the editorial boards of Krytyka, Porównania and the Journal of South Eastern Europe. Since 2014, he has headed the Ukrainian PEN Center, as well as the jury of the Angelus international literary award and the national Yuri Shevelov award for essays.