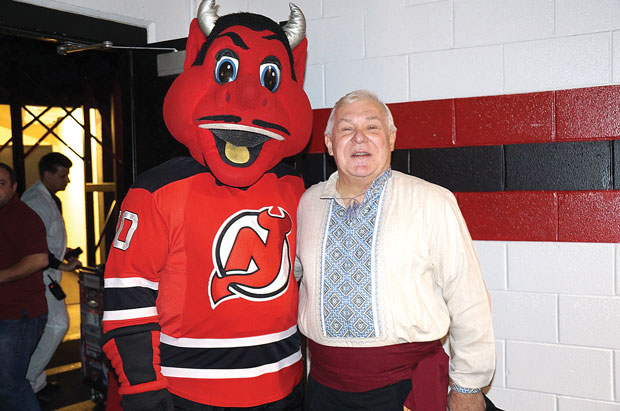 Opera singer Stefan Szkafarowsky, who sang the American national anthem before the start of the game, with the New Jersey Devils mascot. 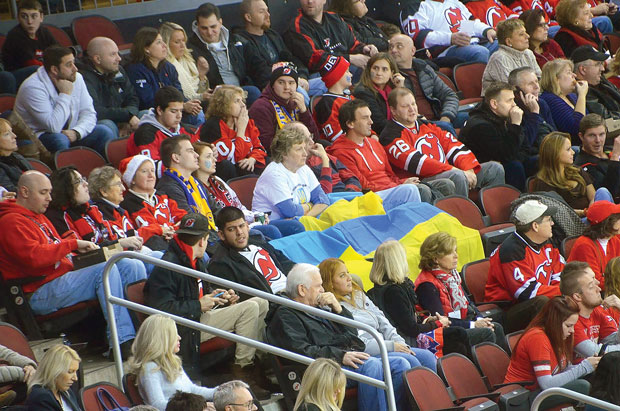 Fans in the stands with a huge Ukrainian flag. 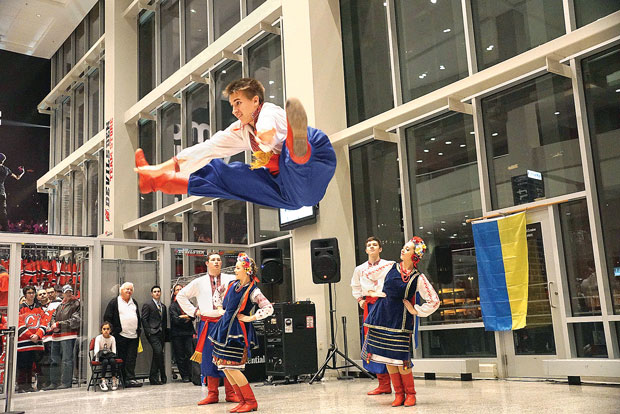 Dancers of the Iskra Ukrainian Dance Academy show off their moves. 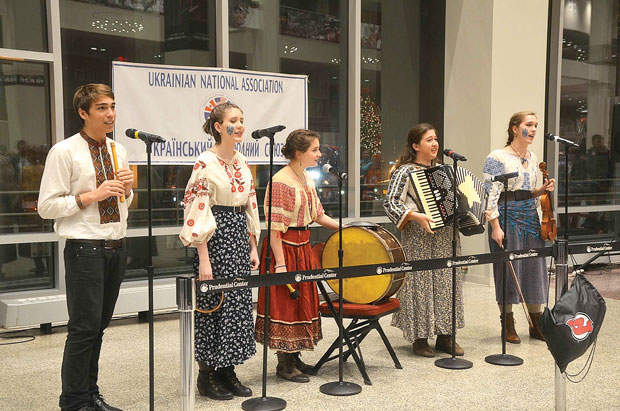 Korinya performs on the main concourse of Prudential Center.

Opera singer Stefan Szkafarowsky, who sang the American national anthem before the start of the game, with the New Jersey Devils mascot. 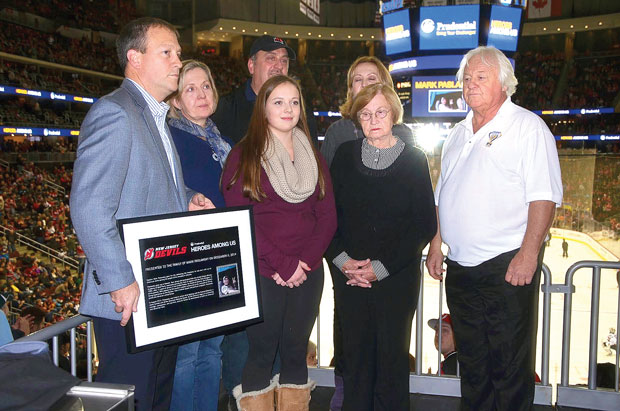 NEWARK, N.J. – Ukrainians demonstrated their Ukrainian pride by donning hockey jerseys, embroidered shirts and blue-and-yellow garb of all sorts, and heading to an ice hockey game on Saturday, December 6, here at the Prudential Center.

The second Ukrainian Heritage Night took place during the game between the New Jersey Devils and the Washington Capitals. Even before the puck dropped at 7 p.m., the melodic sounds of Ukrainian music echoed through the main concourse at “The Rock,” which opened to the public at 5:30 p.m. In a cordoned-off area of the concourse, young Ukrainian dancers were seen jumping and twirling in a variety of Ukrainian folk dances.

Andrij Cybyk, artistic director of Iskra Ukrainian Dance Ensemble and Academy of Whippany, N.J., emceed the pre-game and in-between-periods shows. He introduced each ensemble and explained each regional dance. Taking part and showing their skills were: Iskra, showcasing both its Academy and professional-level Ensemble; Tsvitka   Ukrainian Dance Academy of Rockland County, N.Y.; and Reechka Dance Group, a part of Assumption School in Perth Amboy, N.J., under the direction of Yarko Dobriansky.

Strolling among the throngs of hockey fans were accordionists Alex Chudolij, Matthew Dubas and Walter Syzonenko, who played popular Ukrainian songs. Theo Bodnar, a singer with Ukrainian Bandurist Capella, enthralled the audience with his playing of the bandura. Some had never seen the bandura and had many questions, which Mr. Bodnar answered. Many had asked to pose for photos with Mr. Bodnar and his instrument.

This year, in addition to receiving a T-shirt, designed by Roman Shumansky, a native of Ukraine currently residing in Prague, anyone who purchased tickets through the New Jersey Devils website using the code word “Ukrainian” also received a tote bag donated by the Ukrainian National Association and a Ukrainian flag donated by Selfreliance Ukrainian American Federal Credit Union of Newark and Whippany, N.J. (the credit union is headquartered in Chicago). The UNA was also a sponsor of the event, via advertisements in its two newspapers, Svoboda and The Ukrainian Weekly, and the printing of programs.

Children, as well as many adults, waited patiently in line to get their faces painted with either a blue-and-yellow flag or a tryzub (trident, the Ukrainian national emblem), some adorned with sparkles. A “face in the hole” that enabled visitors to seemingly pose in Ukrainian costumes was a new addition this year, built by Mark Mazuretz and hand-painted by Linda Kleban.

During the first intermission, Maksym Lozynskyj, 17, dressed in his Kozak best and draped in the Ukrainian flag, made his entrance seated on the Zamboni, waving his arms and beaming with pride. Meanwhile, out on the concourse, the dancers once again delighted the audience with their acrobatics and fancy footwork.

At the first stoppage of play in the second period, the “Heroes Among Us” segment was announced. During games when the hero is introduced, all in the arena rise from their seats to give the hero, normally present, a standing ovation. This time was not much different, except that Jim Leonard, senior vice-president of Devils Entertainment, presented the Paslawsky family with a plaque in appreciation of their late son, brother and uncle, Mark Paslawsky. Col. Paslawsky, a graduate of West Point, moved to Ukraine, joined the Ukrainian army and was killed earlier this year during a battle in eastern Ukraine. As the entire audience responded with a thunderous standing ovation, the Paslawsky family, through tearful eyes, thanked the Devils for their thoughtfulness.

When the hockey game concluded – the Capitals won 4-1 – hundreds of Ukrainians and non-Ukrainians flocked to the main concourse for the after-game concert. Andrij Dobriansky, the emcee of the concert, introduced Joshua Malakoff, spokesman for the Devils, who greeted the audience and thanked them for their support. Mr. Dobriansky introduced 14-year-old Anna Kosachevich, who sang “God Bless America.” Mr. Dobriansky and his brothers Yarko and Yurij sang the Ukrainian national anthem, adding a few more verses from the original version that many had not heard before. The brothers also sang two more numbers.

Next was Maksym Lozynskyj, who played guitar and sang “Almost Spring,” “The Wall” and “Rise Up” – songs full of hope for the future. Miss Kosachevich followed with “Svicha,” a song dedicated to the heroes who gave their lives for Ukraine’s freedom, “Christmas’ Quiet Night” and “Prayer for Ukraine.” Ms. Oksana Telepko entered the stage area with her bandura and enthralled the listeners with “Blowing Winds,” a selection about a boy who leaves for war and the girl who misses him; “Motherland” about Ukraine; and a Christmas song, “Where Are You Going, Three Wise Men,” joined by her daughter Katrusia.

The evening ended with an appearance by St. Nicholas, who greeted the children and adults, passing out a secret confectionary treat to all the good people.

The evening was organized by Myron and Christina Bytz under the auspices of the planned Ukrainian Sports Hall of Fame and Museum. An additional co-partner for this year’s event was Lys Sports Academy of Whippany, N.J.