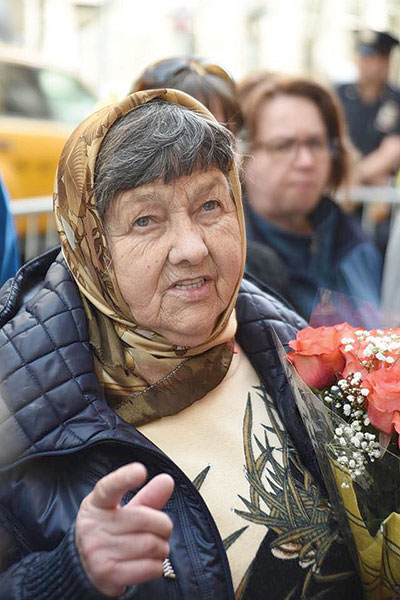 Maria Savchenko at a New York City rally in support of her daughter Nadiya Savchenko.

PARSIPPANY, N.J. – The mother of Nadiya Savchenko, the Ukrainian pilot currently imprisoned in Russia, has launched a global campaign to free her daughter.

Nadiya Savchenko, who has been in Russian custody since mid-June 2014 when she was captured in the war zone in Ukraine, is awaiting trial on charges of complicity in the killing of two Russian journalists during the conflict. She denies the charges and has spent 83 days on a hunger strike to protest her detention.

Her mother, Maria Savchenko, 78, told the Associated Press on April 20 that Nadiya is a political prisoner. Mrs. Savchenko said Russian prosecutors have showed “no evidence” that her daughter provided guidance for a mortar attack that killed two Russian state TV journalists at a checkpoint in eastern Ukraine, as Moscow claims.

Mrs. Savchenko launched her global campaign in Germany, where she pleaded for help from lawmakers and wrote to Chancellor Angela Merkel. New York was her second stop. She is traveling with her daughter’s Russian lawyer, Mark Feygin.

On April 19, Mrs. Savchenko met with her daughter’s supporters in the United States, who organized a rally near the Russian Mission to the United Nations. According to the rally’s event page on Facebook, participants protested Nadiya Savchenko’s illegal detention in a Russian prison, which, they underscored, violates all norms of international law.

The protesters demanded freedom for Ms. Savchenko and prayed for her release, and signed a large Ukrainian flag that will be sent to her. They also signed a petition to presidential candidate Hillary Clinton, seeking her help in securing the Ukrainian pilot’s release. Among the demonstrators were not only Ukrainians, but also Georgians, Belarusians, Moldovans and Latvians.

On April 20, Mrs. Savchenko and Mr. Feygin appeared at an informational meeting organized by the Ukrainian National Women’s League of America at The Ukrainian Museum in New York to provide the latest update on the Savchenko case. (See story on page 8.) 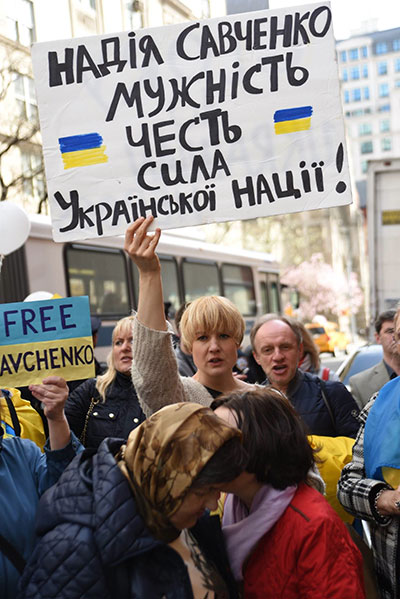 On April 22 Mrs. Savchenko met with U.S. Ambassador to the U.N. Samantha Power. According to a readout of the meeting provided by the U.S. Mission to the U.N., Ambassador Power stated: “It has now been 307 days since Nadiya Savchenko was abducted in eastern Ukraine and smuggled against her will into Russia. I was very moved to hear Maria talk about Nadiya and can only imagine how painful it must be to see one’s daughter’s health deteriorate in prison, with no clear idea about when she might be freed.”

The ambassador assured Nadiya Savchenko’s mother and lawyer that, “The United States is committed to working to secure her daughter’s release, just as we also remain dedicated to securing the release of all of those Ukrainians illegally held by the separatists and Russia.”

Meanwhile, in Kyiv, the Verkhovna Rada passed a resolution appealing to Russian President Vladimir Putin to release Ms. Savchenko, who is a Ukrainian national deputy and a delegate to the Parliamentary Assembly of the Council of Europe, as well as film director Oleh Sentsov and all other Ukrainian citizens illegally detained and imprisoned by the Russian Federation.

On April 21, news media reported that, in a phone call with U.N. Secretary General Ban Ki-moon, Ukrainian President Petro Poroshenko urged him “to take measures for the liberation of Nadiya Savchenko” and emphasized that “all hostages in the Donbas should be liberated.”

In Moscow, Russian Foreign Affairs Minister Sergei Lavrov said in an April 22 interview with several radio stations that he did not exclude amnesty for the jailed Ukrainian pilot as part of Minsk agreements’ provisions, but added that the case should first be heard in court.

Mrs. Savchenko said she would also travel to France and other European countries. The Associated Press quoted her as saying, “I’m a desperate mother who is ready to travel the globe to make everything possible that my message be heard.” She added, “I call upon all international leaders to help me to bring my daughter back home.”