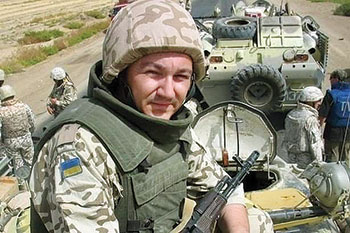 Dmytro Tymchuk, a military journalist, a colonel in the reserve who at the very onset of Russia’s aggression against eastern Ukraine in 2014 founded the Information Resistance group to expose Russian military tactics, and a national deputy of the People’s Front, was found shot dead on June 19 in Kyiv, Ukrainian police confirmed.

Artem Shevchenko, spokesperson for the Ministry of Internal Affairs, said on the air of the Priamyi TV channel that Mr. Tymchuk’s wife had found him with a gunshot wound to his head. Law enforcers are examining three versions: murder, suicide and careless handling of weapons. An investigating and operational team is in place to learn the circumstances.

Anton Herashchenko, a deputy from the People’s Front, had originally written in a Facebook post that the tragedy happened while Mr. Tymchuk was cleaning his award gun at home. But this version has not been confirmed. Mr. Herashchenko has since edited his post.

Mr. Tymchuk, 46, had served in various departments of the Ministry of Defense. In 2008, he became the editor-in-chief of the Internet project “Fleet-2017” and headed the NGO Center of Military-Political Atudies.

After Russia’s annexation of Crimea and the start of the conflict in the Donbas, he became the coordinator of the group Information Resistance, thanks to which he became one of the most influential opinion leaders on the Internet in Ukraine. During Ukraine’s snap parliamentary elections in 2014, he was elected as a national deputy from the People’s Front political party.

Euromaidan Press had translated and covered many of the works of Mr. Tymchuk’s Information Resistance Group in the first days of its activity (our first article telling about the foundation of the group on March 10, 2014, is found here: http://euromaidanpress.com/2014/03/ 10/ukrainian-army-reserve-officers-create-information-resistance/).

Mr. Tymchuk described the work of the group thus:

“The initiative group is made up of the recently retired reserve officers such as myself. This means that we do not have bosses, we do not get paid for our work and, therefore, depend on nobody. We are working on pure enthusiasm, and the only force motivating us is patriotism.”

“Incoming information is checked by at least two, but normally three independent sources. …Each message we transmit is backed up by the work of many people.”

“There is no point in lying. Aggressors need lies to cover up their vile intentions. Only an idiot would answer lies by lying. As we see, the Russian propaganda nonsense is easy to rebuke (it suffices to recall the fable about the crowd of ‘defectors’ from Ukrainian military units, or about the Hetman Sahaydachnyi [flagship] leaving Sevastopol). Our weapon is the truth.”

Information Resistance proceeded to cover the military action in eastern Ukraine based on its network of contacts in the military.