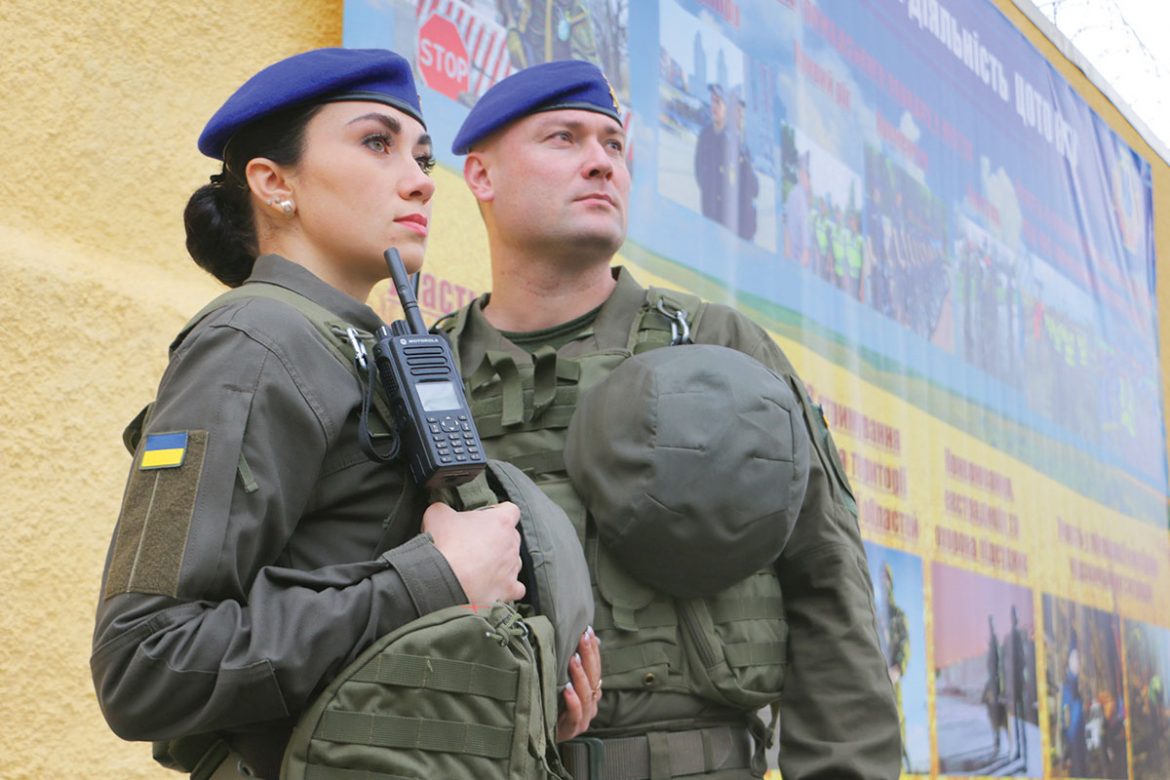 Press service of the National Guard of Ukraine

In this undated photo, National Guard Lt. Nataliya Manko is at work with her husband, Serhiy Manko, a lieutenant colonel in the National Guard.

KYIV – As a 29-year-old lieutenant in the country’s National Guard, Nataliya Manko has only known a free and independent Ukraine. She said she does not want Ukraine to revert to what she calls the “nightmare” of the nation’s past as a subordinate republic of the USSR or Russia.

Born a year after the country restored independence in 1991, she has no conscious memory of that 70-year period when millions of Ukrainians died from war, forced famine or political persecution.

Speaking over the phone exclusively with The Weekly from her deployment base in Dnipro, Ms. Manko said the stories she heard growing up from her grandparents and parents were enough for her to embrace a free Ukraine.

She recalled stories of empty store shelves, long lines even for the most essential of goods and “people in villages not being allowed to leave without having a passport, which was difficult to get.”

It was “like slavery…and the only toys available were military in nature, as if the Soviets were preparing us for war since childhood,” Ms. Manko said, referring to the toys she had as a child. “There was no freedom of speech, no free voting rights.”

The freedoms Ukrainians enjoy, unlike their neighbors in despotic regimes in neighboring Russian and Belarus, are not lost on Ms. Manko.

She grew up cherishing her civil liberties. Ms. Manko was born in a semi-rural area in the Poltava oblast district town of Dykanka – the setting of famed Ukrainian writer Mykola Hohol’s collection of short stories titled “Evenings on a farm near Dykanka.”

“Right now, we have independence, a democracy and voting rights…there is free speech and a gender-equity approach, women can now become engineers when earlier they couldn’t, they can become military commanders,” Ms. Manko said of the strides Ukraine has made since 1991.

About 53 percent of Ukraine’s adult population say they can “openly express their political views,” a joint survey conducted by the Ilko Kucheriv Democratic Initiatives Foundations and the Razumkov Center found earlier this month.

Ms. Manko is serving in her 10th year in the National Guard, which changed its name from Internal Troops in 2014 after a popular democratic uprising opposed the increasingly authoritarian and corrupt rule of former President Viktor Yanukovych.

She currently is stationed in a military unit that is subordinated to the Central Territorial Administration in Dnipro (formerly Dnipropetrovsk), 480 kilometers southeast of Kyiv.
To Ms. Manko, service in the National Guard means “not only serving to protect my country,” but it also means “ensuring the safety of my family and a life into seniority.”

Serving with her husband Serhiy, a lieutenant colonel, she is thankful to her parents for “being born in a free Ukraine.”

To Ms. Manko, Ukraine’s 30th year of independence and her Ukrainian citizenship “means being proud…Ukrainians should like their homeland…it means we are independent and the country gives us opportunities to grow.”

According to the same survey, 72 percent of respondents said they were either “rather proud or very proud” to be Ukrainian.

Her goal is to eventually become a general, the first woman in the National Guard, “because a poor soldier is one who doesn’t strive to become a general,” she said.
She already has the status of combat experience after being in the war zone for one month where Russian-armed formations have occupied certain parts of the two easternmost regions of Luhansk and Donetsk in a conflict that has killed 14,000 people since 2014.

When asked with whom Ukraine is at war, Ms. Manko said with “our neighbor.” When pressed to specify which neighbor among six bordering countries, she responded: “Russia.”

Currently, approximately 5,000 women serve and work in the ranks of the National Guard, of whom more than 360 hold managerial and command positions – or less than 1 percent.

There are also no female generals in the Armed Forces. However, more than 31,000 women serve in the Armed Forces, comprising nearly 16 percent of personnel, Defense Ministry statistics show. It’s a high rate compared with other countries. The United States nearly matches that rate with 14 percent, according to U.S. Defense Department data.

To become a general, Ms. Manko said, means to achieve more education to qualify. She graduated from a medical college in Poltava “because my parents didn’t have money to send me to a medical academy.”

Her two other degrees are from the Yuriy Buhai International University of Science and Technology in Kyiv where she majored in telecommunications and radio engineering, as well as accounting and taxation via distance learning.

Asked what she wants most from life and her personal interests, Ms. Manko said, “I want to be loyal to my country, wish for stability in Ukraine…I want an end to the war…I’m married, I care for my family and I enjoy reading books about psychology.”