The National Symphony Orchestra of Ukraine

PARSIPPANY, N.J. – The National Symphony Orchestra of Ukraine (NSOU), the country’s most acclaimed cultural ambassador and one of the most distinguished orchestras of Europe, will undertake a 44-concert North American tour beginning on January 18 in Fort Myers, Fla., and concluding in the San Francisco area on March 26.

Mr. Kuchar told The Ukrainian Weekly that he has been “fighting for this North American tour for ages” and that it promises to be “the largest-scale cultural event coming from Ukraine in our time.” 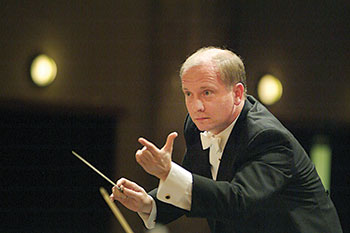 Theodore Kuchar, the symphony’s first artistic director and principal conductor, who is currently the conductor laureate.

In New Jersey, concerts are scheduled for Union (February 10), New Brunswick (February 19), Morristown (February 23); in the New York City area, there is a performance in the Bronx (February 12).

The NSOU has regularly collaborated with the most distinguished conductors of the past, including Evgeny Mravinsky, Igor Markevitch, Evgeny Svetlanov, Kiril Kondrashin, Kurt Sanderling and Gennady Rozhdestvensky, while having partnered with soloists such as Sviatoslav Richter, Emil Gilels, Artur Rubinstein, Van Cliburn, Leonid Kogan, David Oistrach, Isaac Stern, Yehudi Menuhin, Mstislav Rostropovich and Gidon Kremer, among many others.

Kudos for past tours

Tour reviews from the recent past have included the following.

• “In the Fifth Symphony of Shostakovich, the orchestra performed with a very rare level of perfection and uncontrolled intensity, earning roars and applause from the audience that filled the Auditorio Nacional, the great success granting three encores. The performance of the Shostakovich confirmed the high quality of the Ukrainian masters … all under the excellent and extrovert direction of Theodore Kuchar , who at all times offered a level of intensity of one thousand degrees, yet always remaining enthusiastic and clear.” – Antonio Iglesias, ABC (Madrid).

• “With City Hall packed and tickets more scarce than gold in Leeds for Saturday night’s concert, the tour of the NSO of Ukraine is proving a box office triumph. Though it has not enjoyed the high-profile status of many orchestras from the former Soviet Union, it is technically accomplished and as red-blooded as the best of them. It has in its lifeblood the music of the great national composer, Prokofiev; the First Suite from ‘Cinderella’ bubbled with vitality and brilliance, the final scene a wonderfully vivid conclusion. Conductor Theodore Kuchar packed every punch known to musical mankind in his dramatic reading of Dvorak’s ‘New World Symphony.’ The first movement, complete with repeat, was whipped up to a frenzy of excitement, and following a Largo with an earthy cor anglais, and also featuring some exquisite quiet strings, Mr. Kuchar offered a quick-silver and highly-charged reading of the Scherzo and Finale.” – David Denton, The Sheffield Post (England).

• “This is an orchestra with many virtues. Its strings can conjure up a vibrant songfulness; the woodwinds have a fruity, penetrating ripeness; the brass could endanger the walls of Jericho; the percussion might wake the dead. The 80 musicians, disciplined and balanced, show enough stamina to sustain fortissimos for hours on end. The arm that wields the baton for all this is that of Theodore Kuchar. Kuchar commands the Ukrainian orchestra with a meticulous, all-embracing authority and intensity resulting in vivid performances.” – Fred Blanks, The Sydney Morning Herald (Australia).

For further information readers may contact the orchestra at NSOU2017@gmail.com.

The National Symphony Orchestra of Ukraine