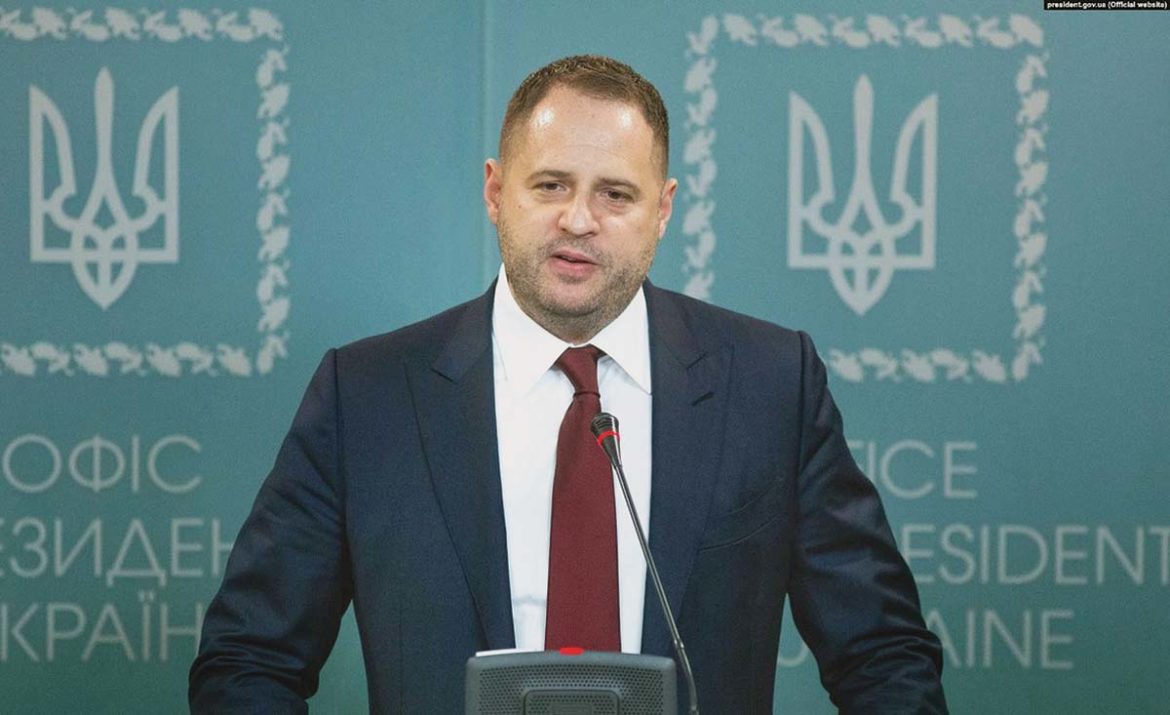 Andriy Yermak, head of the Presidential Office of Ukraine.

KYIV – The most recent meeting of the Trilateral Contact Group on Peaceful Settlement of the Situation in the Donbas was held in Minsk, Belarus, without being publicly announced beforehand. Only after the media of militant groups in the occupied Donbas published news about the March 11 meeting did a news release appear on the website of the Presidential Office of Ukraine.

The March 11 meeting was attended by the head of the Presidential Office of Ukraine, Andriy Yermak, and the deputy head of the Presidential Administration of the Russian Federation, Dmitry Kozak. The results of the meeting included an agreement on additional troop withdrawals, an exchange of prisoners and checkpoint openings. Public outcry was provoked by news about the establishment of an advisory council, a new body that could legitimize the occupational authorities of the uncontrolled areas of Donetsk and Luhansk regions (known by the Ukrainian-based acronym ORDLO).

The Presidential Office reported that the meeting in Minsk resulted in four decisions – first of all, an exchange of detained persons. A statement on the presidential website says that the parties agreed “To submit to the TCG [Trilateral Contact Group] a list of persons subject to mutual release, taking into account the need to complete the said release as soon as possible” and “To submit to the TCG definitively agreed lists of persons subject to the mutual release procedure, including the results of the verification carried out by the International Committee of the Red Cross, with the unconditional and unimpeded access of ICRC representatives to designated persons in the territories of Ukraine and ORDLO.”

The second and third decisions of the meeting related to “disengagement of forces and assets” and “simultaneous opening of the checkpoints in Zolote and Shchastia.” The fourth and final point of agreement – “the establishment of an advisory council” – is the most controversial. The decision on the council’s establishment “as part of the TCG political subgroup after consultations with representatives of the OSCE [Organization for Security and Cooperation in Europe], the French Republic and the Federal Republic of Germany” is expected to happen on March 25 in Minsk.

A source in the negotiation group shared the protocol of the March 11 meeting with the Dzerkalo Tyzhnia news outlet. That version of the document contains decisions different from those published on the Presidential Office website. Dzerkalo Tyzhnia published the document on March 13, commenting that the agreements reached in Minsk legitimize the so-called Donetsk and Luhansk people’s republics and give them voting rights on the advisory council. The new body is expected to include 20 members: 10 representing Ukraine and 10 representing the temporary occupied territories.

Later, Mr. Yermak tried to explain that the occupational authorities would not have half of the votes on this consultative body, but only five. The other five would be chosen from internally displaced persons (IDPs) who fled from the Donetsk and Luhansk regions after the start of Russian war. However, even if the choice of advisory council members were to be made this way, the leaked version of the protocol says the council’s decisions are made by a three-quarters vote of its members. This formula makes it easy for the militants to block decisions. Though the advisory council is to serve merely in a consultative capacity to the Trilateral Contact Group, its opinion could be used by the Russian side to continue sabotaging the peace process.

Ex-Minister of Foreign Affairs Pavlo Klimkin commented about the leaked protocol on his Facebook page. “First, it is a huge step towards Russia and its wishes. The text is written in such a way that there is no formal legal recognition there, but in fact, it is recognition of the occupation administrations. This is exactly what Russia is now speeding up, but, more importantly, this is the way many in the West perceive it, Mr. Klimkin posted. He added that Ukraine had always based on the legal principle that “the only legitimate authority in those territories was and remained the one that was elected in 2010.”

“Secondly, there is also the problem of establishing ‘rules’ and clear ‘procedures’ for the functioning of this ‘council,’ to which we have never agreed, even for the TCG in Minsk. That is, this ‘council’ becomes a de facto formal body,” Mr. Klimkin continued. “Third, it creates and strengthens the logic of an ‘internal conflict’ in Ukraine, and Russia assumes the role of mediator, the same as Germany and France. By the way, did anyone think how this would affect our cases in international courts?”

“And fourthly, who will prevent Russia from destroying the TCG and leaving only this ‘council’ as functioning? The answer is obvious. And most importantly, tell me, what is the added value for Ukraine of creating this structure? For Russia, it is obvious. What can this structure do better than the previous one? That’s right – nothing but direct negotiations, well, let’s call them consultations,” wrote the ex-minister.

Mr. Klimkin continued his post by offering an opinion on how this will affect the international perception of the conflict. “The question now is: Will Germany and France contradict it? I dare say no. For them it is only useful that we take the problem of the Donbas upon ourselves, and they have gotten room for maneuver to talk to the Russian Federation. Does this mean that everything will now go exclusively according to the Russian scenario? This question is the key and depends on Volodymyr Zelenskyy. Arrangements are one thing, and their implementation is another.”

When the topic of the advisory council achieved high visibility among the Ukrainian public, Mr. Yermak tried to explain the details – at least why this time he personally came to the meeting and did not leave the negotiations to Leonid Kuchma. During Savik Shuster’s “Freedom of Speech” program on Ukrainian TV, the head of the Presidential Office emphasized that he had decided to attend the meeting of the Trilateral Contact Group because over three months many of the agreements reached by the presidents during the Paris summit [in December 2019] had not been implemented. “So I decided to come personally and check what is going on there,” Mr. Yermak explained. However, after Mr. Yermak’s appearance on TV, the public still had more questions than answers.

Some national deputies of the Servant of the People parliamentary faction are demanding a halt to the advisory council’s launch. The text of their appeal published on Facebook reads: “It is alarming that the advisory council that is being created will comprise representatives of Ukraine and certain areas of the Luhansk and Donetsk regions uncontrolled by Ukraine as parties to the consultations with equal rights.” The national deputies said that talks with the so-called people’s republics and the temporarily occupied areas of the Luhansk and Donetsk regions (ORDLO) cannot be conducted in any form.

“All talks on ensuring the rights and interests of the citizens of Ukraine, and also on the termination of military aggression, need to be conducted only with the Russian Federation and its officials. The legitimacy of representatives of the so-called ORDLO can only be recognized if they were appointed by lawful Ukrainian officials or lawful bodies of the authority of our state,” the statement said. The national deputies said they are convinced that the practical implementation of the provision on the advisory council will become a foundation for doubting the legislatively stated position of Ukraine on Russia’s responsibility for the occupation of Crimea and its military aggression on the territory of the Donetsk and Luhansk regions. That, in turn, will lead to questions about the sanctions imposed on Russia for its acts of aggression and will not in any way resolve the security situation in the Donbas.

Addressing President Zelensky, the national deputies cited “the antagonistic public reaction to the recent Minsk initiatives” and called on him to issue orders “to Ukrainian officials in the Trilateral Contact Group and all Ukrainian negotiators to return to the framework of Ukrainian legislation and prevent implementation of the published decisions regarding the creation of the advisory council… which runs counter to current legislation of the state and its national interests,” the deputies stated.

Meanwhile in the Donbas, Russia-led mercenaries fired on a disengagement site from a hand-held anti-tank grenade launcher and using small arms, according to the press center of the Joint Forces Operation (JFO) headquarters. “Armed groups of the Russian Federation deliberately carried out armed provocations in the area of disengagement. So, today, on March 13, the Russian invaders once again fired at the disengagement area of Bohdanivka-Petrivske,” the JFO staff said on March 14. The Ukrainian military emphasized that such provocative actions by Russian illegal armed formations in the specified area “are quite obviously aimed at forcing the units of the JFO to open fire and to further accuse our defenders of disrupting the Minsk agreements.”