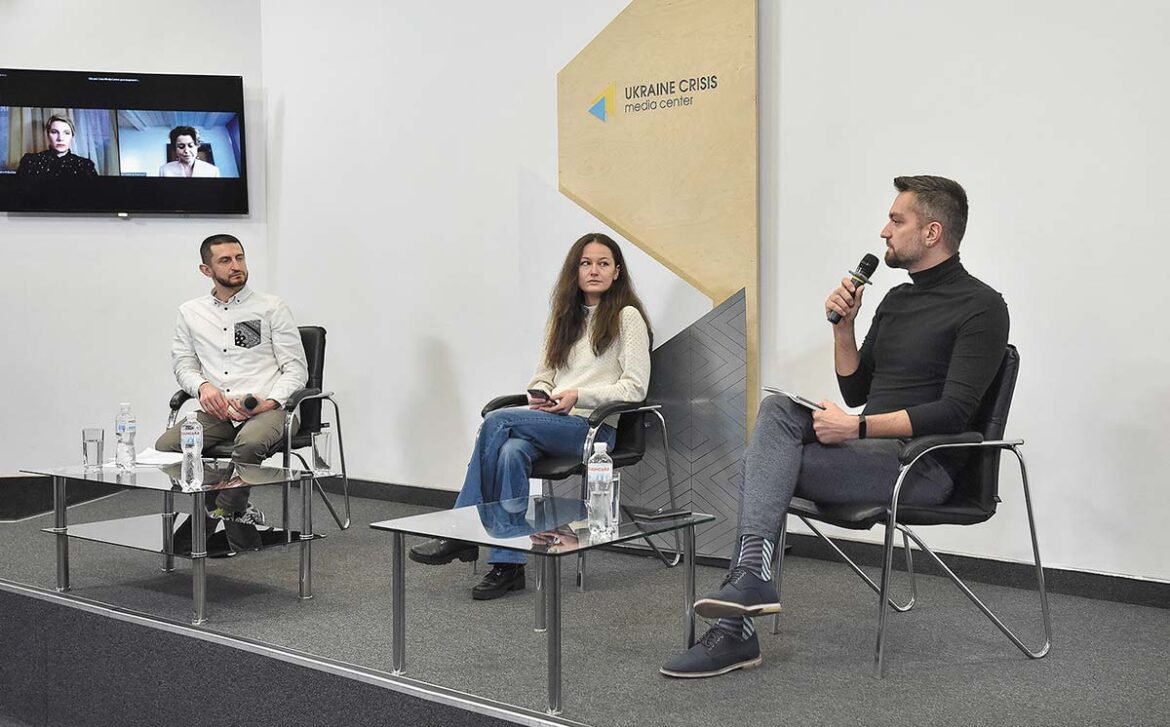 Volodymyr Sheiko (right), director general of the Ukrainian Institute, presents research findings at the Ukraine Crisis Media Center in Kyiv. Joining him on stage for the discussion were his colleague, Alim Aliev (left), and Iryna Matviyishyn of Internews-Ukraine. Lyubov Tsybulska (Hybrid Warfare Analytical Group) and Nataliya Popovych (One Philosophy) participated via video link.

WASHINGTON – As Ukraine pursues membership in the European Union and NATO, Ukrainians are often surprised by how little many Westerners know about their country. As a key step toward addressing this challenge, Ukrainian experts in the field of cultural diplomacy recently set out to assess how historic events and phenomena that have shaped Ukraine’s story and identity over the past century fit into contemporary news narratives.  For example, what, if anything, do leading European media have to say about how Ukrainians have experienced the Holodomor, World War II, Chornobyl, post-Soviet democratization, and the Ukrainian avant-garde and Executed Renaissance?

Some interesting insights are provided in a newly released study organized by the Ukrainian Institute in Kyiv and the One Philosophy consulting group.  The research, conducted by Corestone Group, analyzed news coverage by 30 major outlets in Great Britain, France, Germany and Poland in 2018-2019, including such influential publications as the Economist, the Guardian, the Financial Times, Le Monde, Le Figaro, Liberation, Le Parisien, Die Welt, Frankfurter Allgemeine Zeitung, Der Spiegel, Suddeutsche Zeitung, Gazeta Wyborcza and Rzeczpospolita.

The study generally confirmed a disappointing paucity of Ukrainian perspectives in European news media coverage of major events that have been commemorated in contemporary European historical and cultural discourse.  However, there are some encouraging signs regarding narratives that reflect Ukrainian sensibilities breaking into the mainstream.

The study found that the Holodomor and Chornobyl and their impact on Ukrainians did, indeed, receive notable coverage in major European news media. The interest of journalists and editors in these historic topics can likely be attributed, at least in part, to popular culture and non-fiction works – namely the release of the HBO miniseries about the 1986 nuclear disaster in Ukraine, Serhii Plokhy’s “Chornobyl: The History of a Nuclear Catastrophe,” the critically acclaimed feature film “Mr. Jones” about the Welsh reporter who witnessed the genocidal famine, and Anne Applebaum’s “Red Famine: Stalin’s War on Ukraine.”

The following excerpt provides a sample of the report’s findings: “All Polish media under study, in particular Gazeta Wyborcza and Rzeczpospolita, described the famine of 1932-1933 in Ukraine as a genocide staged by Stalin and the Soviet authorities.  In general, any other narrative that would deny the definition of the Holodomor as a genocide of the Ukrainian people was absent from Polish media.  …The German media generally covered the Holodomor in a moderate and cautious manner.  It is also worth noting that among the European media analyzed in this report, only the German media wrote about the Holodomor as a ‘central trauma to Ukraine’s national memory’ and a ‘central element of Ukrainian national identity.’ …The British media mentioned the Holodomor quite often.  The authors wrote about the Holodomor as a phenomenon caused by Soviet politics, and referred to the event as a mass murder and/or genocide.”

Meanwhile, despite commemorations of the 80th anniversary of the Molotov-Ribbentrop Pact between Nazi Germany and the Soviet Union, the devastation caused in Ukraine during World War II and its geopolitical ramifications for Ukraine barely registered in the coverage of European news publications that were reviewed.

Many Ukrainians express disappointment that their history and culture is misrepresented, misunderstood or ignored by foreigners. According to Volodymyr Sheiko, director general of the Ukrainian Institute, this study will help inform Ukraine’s cultural diplomacy efforts moving forward. “In order to properly tell Ukraine’s story, in order to find the right key to capture the attention and hearts of people abroad, we need to have a good understanding of the image of Ukraine that they grew up with and how it was formed and the sources of that information about Ukraine,” he said.

During his November 26 presentation at the Ukraine Crisis Media Center, Mr. Sheiko added that Ukraine did not just appear out of thin air in 1991 and that the nation has a long, distinct history and culture and must exercise its right to form its own historical narrative. That effort should focus on proposing genuine, compelling stories and content and not just being in a reactive mode of countering Russian depictions of events, he said.

Moscow’s campaigns of disinformation and dismissive treatment of Ukraine carried out in pro-Kremlin Russian media – and all-too-often disseminated in Ukrainian and other European media – have been the subject of much research and analysis. The Ukrainian Institute study also surveyed Russian media and, unsurprisingly, found Ukrainian perspectives to be missing.

Joining the discussion by video link, Nataliya Popovych, the founder of One Philosophy, explained that the study also looked at news publications in Ukraine: “Analyzing Ukrainian media helps us better understand Ukraine’s internal efforts regarding inculcating a consolidated, collective memory.” Ukrainians shouldn’t be surprised when foreign coverage is lacking, since internal media often suffer glaring shortcomings when it comes to portraying Ukrainian history and culture, as in the case with materials devoted to the Ukrainian avant-garde and cultural rebirth that was brutally suppressed in the 1930s, she said.  Ms. Popovych also noted that when Ukraine’s leaders draw attention to historical and cultural events this helps stimulate coverage in the media.

The Ukrainian Institute project is not the only recent study examining foreign attitudes toward Ukraine.  Last month the New Europe Center, headed by Alyona Hetmanchuk, released polling showing that the citizens of France, Germany, Italy and Poland are increasingly looking more favorably at the prospect of NATO and European Union membership for Ukraine.

At the Ukrainian Institute’s recent International Cultural Diplomacy Forum in Kyiv, Ms. Hetmanchuk shared her thoughts, based on anecdotal evidence, about the attitudes of Western elites and decision makers regarding Ukraine: “My work experience shows that in these circles Ukraine is associated, clearly, with ‘battle.’  It is a constant battle.  Internally – a battle with corruption, and a battle with oligarchs, a battle with many systemic problems.  And externally – a battle for its independence, for sovereignty, for the temporarily-occupied territories, for international support.  That is, a constant battle.” The prevalence of that particular image of Ukraine both within the country and abroad, perhaps, does not need to be confirmed by opinion polls.

Adrian Karmazyn is a former chief of the Voice of America’s Ukrainian Service.