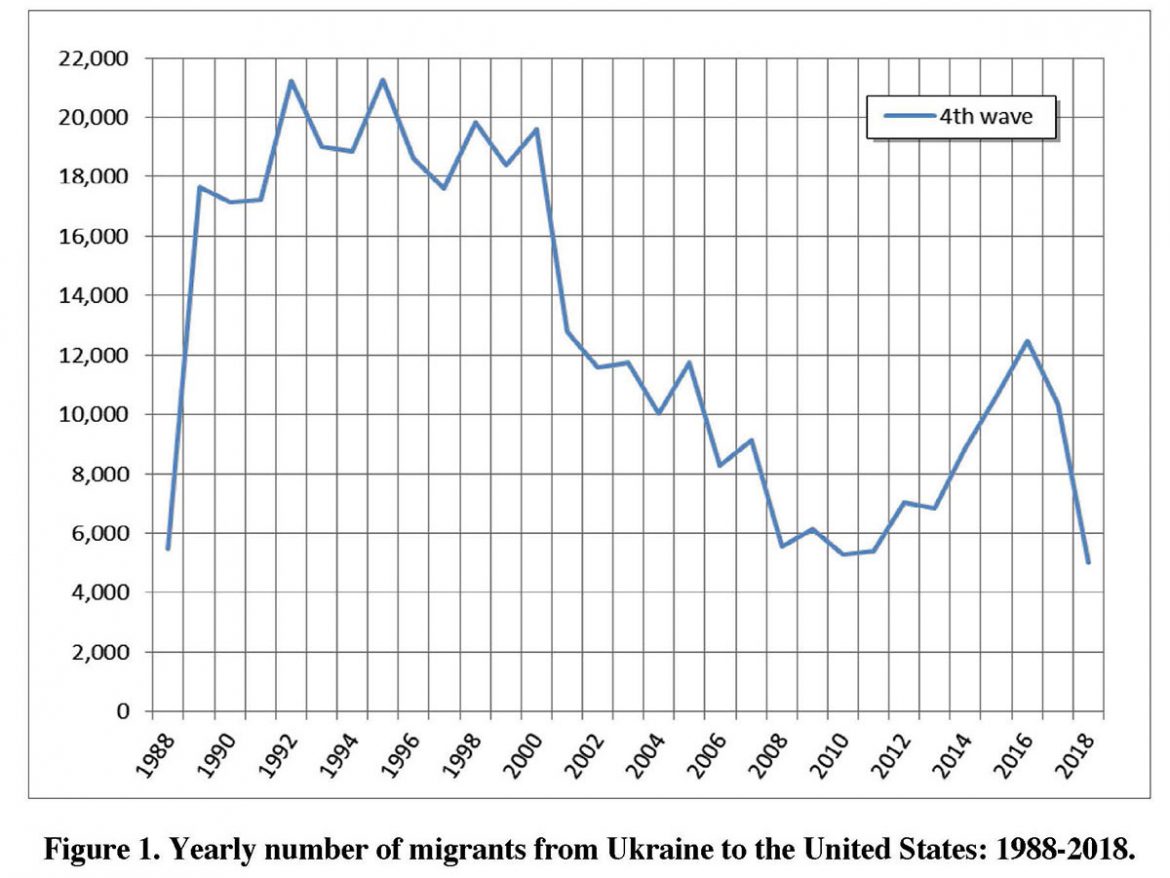 The most recent migration wave from Ukraine to the U.S., known as the Fourth Wave, was probably the most important event in the history of Ukrainians in the U.S. since the First Wave at the turn of the 20th century (Fourth Wave immigrants are persons born in Ukraine who migrated to the U.S. after 1987). The full story of this migration wave remains to be written. Some general information about this migration can be found in several publications (see list at the end of this article). Here the emigration of highly qualified professionals from Ukraine to the U.S. and its implications for the community of organized Ukrainians in the U.S. are analyzed. Based on this example, we point out the precarious position of research on Ukrainians in the U.S. in the field of ethnic studies.

The potential impact of this migration on the Ukrainian community in the U.S. can be summarized with the following statistics. There were 747,000 persons of Ukrainian ancestry in the U.S. in 1980. By 2000 their number increased to one million, out of which 217,000 or 22 percent, were Fourth Wave immigrants. The figures for 2018 are 1.1 million Ukrainians with 320,000 or 28 percent Fourth Wave immigrants. The massive migration from Ukraine to the U.S. is practically over. It is important to study the effects of this migration on the organized life of Ukrainians in the U.S., as this provides important clues for the community’s future. 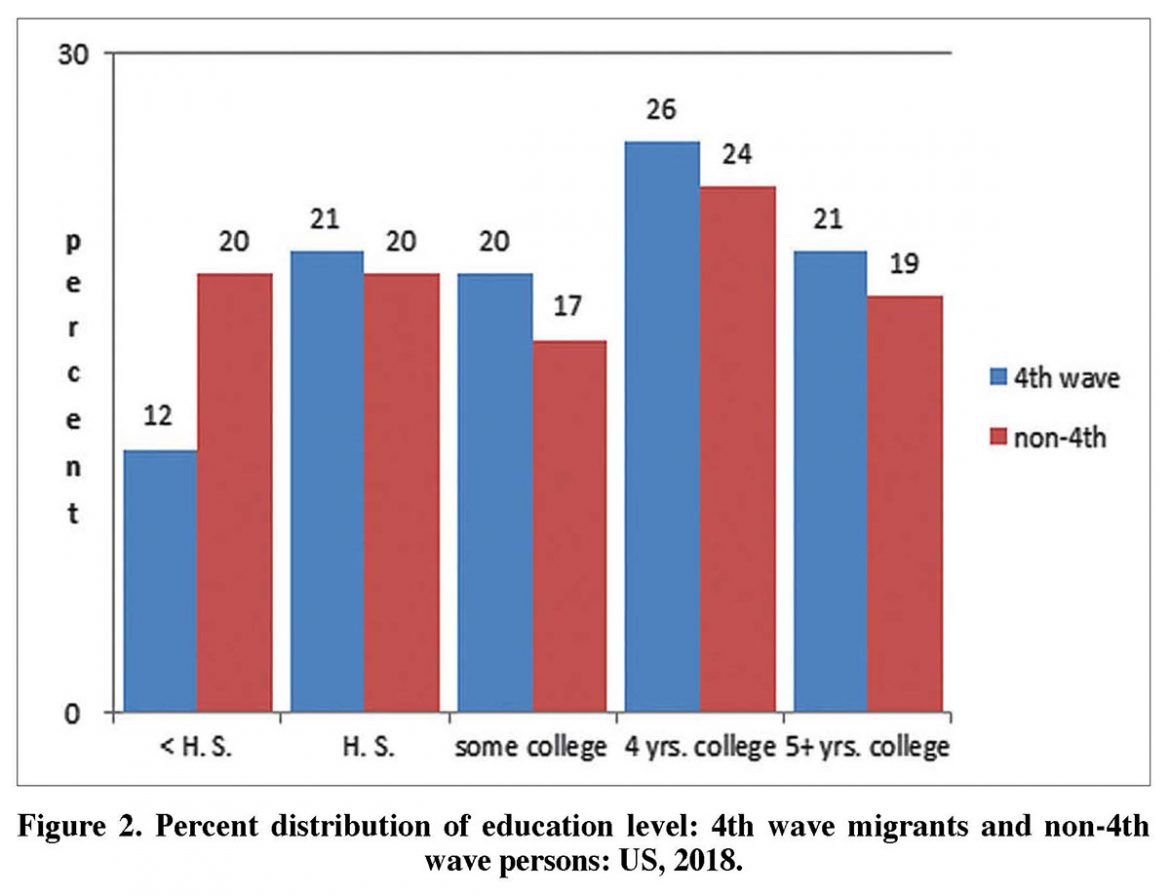 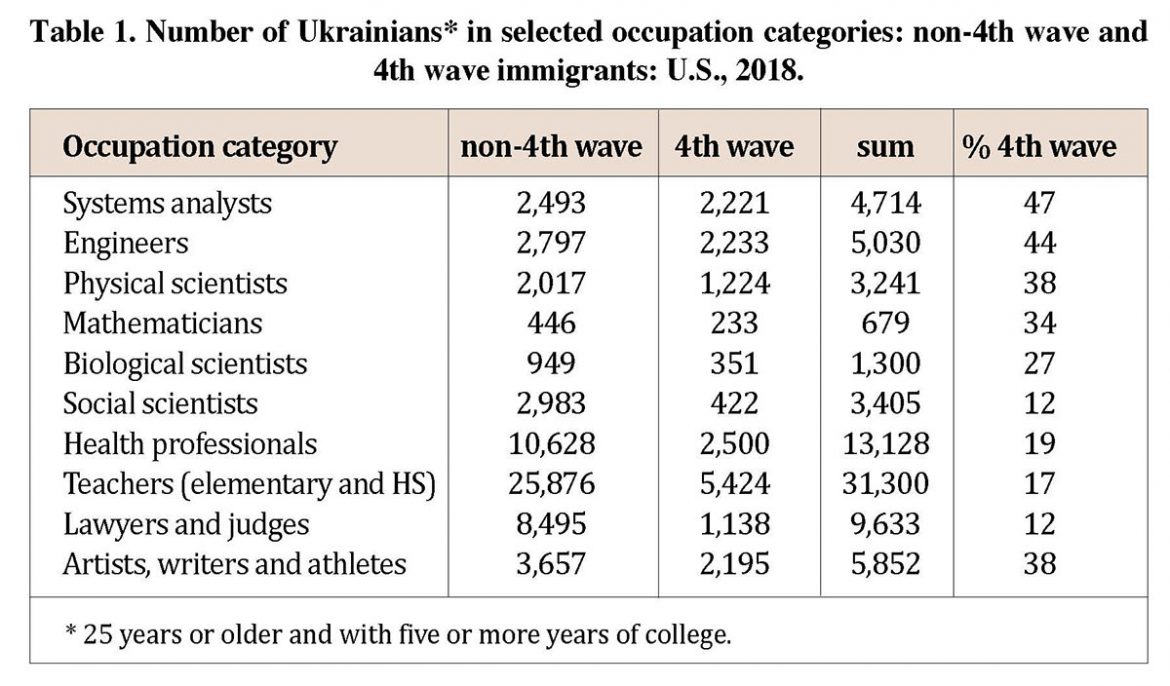 The occupation categories listed in Table 1 can be classified into three groups: science occupations, three categories of special interest and a category with occupations of interest to the organized Ukrainian community in the U.S. (The category “lawyers and judges” is composed of only these two occupations. Unfortunately, judges are not listed separately from lawyers).

The category “artists, writers and athletes,” on the other hand, has a relatively high percent of Fourth Wave immigrants. More detail on this is provided in Table 2, with data on specific occupations.

Professionals with occupations listed in the third group are likely to have found work in Ukrainian organizations. They probably filled a pressing need in our organizations for Ukrainian-speaking cultural and educational professionals. This is confirmed by the very high percentages of Fourth Wave immigrants in these occupations. The data on professional athletes have also been included for sports fans.

These results raise several questions. The first question regards the cost to Ukraine of the emigration of this specialized workforce. The Fourth Wave professionals in the U.S. can be divided into two groups: those who left Ukraine after having finished most of their higher education and those who obtained most of their education in the U.S. An analysis of these professionals by year of emigration and level of education at the time of migration shows that more than half of them had five or more years of college. This means that Ukraine paid for most or all their education, and the U.S. profited from this investment. Those who obtained most of their education in the U.S. can be considered a potential loss for Ukraine, assuming that they could have achieved their potential in Ukraine. One can conclude that Ukraine made a significant contribution to the American economy and society. 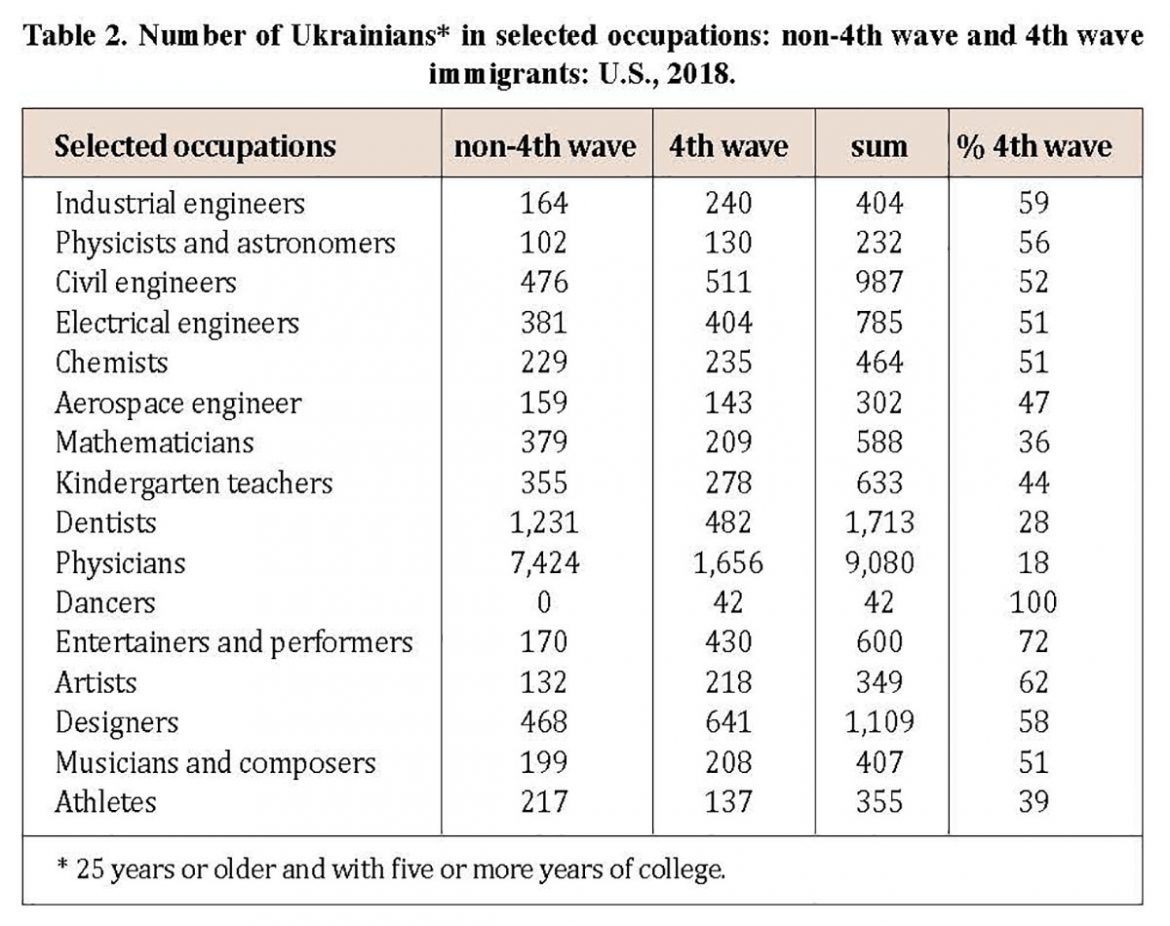 One of the many characteristics of the Fourth Wave, based on official U.S. data, has already been described. The description of the Fourth Wave in the U.S. academic literature is very different. For the most part, the Fourth Wave is practically absent in American ethnic studies. The few exceptions, as shown by the following example, are quite disappointing.

The excellent overview of immigration to the U.S. since 1965 (Mary C. Waters and R. Ueda, 2007) provides a comprehensive description of the latest research results on immigrants of different ethnic groups in the U.S., with chapters on many countries/ethnic groups. The book has chapters on Russia and Poland but not Ukraine.

The chapter on Russia has a few comments about recent emigration from Ukraine, but it has serious mistakes (Gold 2007). The following paragraph illustrates the author’s understanding (or misunderstanding) of the Fourth Wave of immigrants to the U.S. from Ukraine:

“Whether ethnically Russian or not, recent immigrants from Russia and the former Soviet Union are party to the Russian culture, language, and way of life to a greater extent than immigrants in the past. Because of their involvement with Russian culture, many develop ties to the greater Russian-American community when they arrive in the U.S. Regardless of their ethnicity and religion, they tend to speak Russian and have similar tastes and cultural outlooks.”

The U.S. is a country of immigrants. A branch of sociology called ethnic studies was developed to analyze the different ethnic groups in the U.S. and document their contributions to American society. Research on most ethnic groups can be found in articles published in professional journals and scholarly books. Unfortuna­tely, this is not the case for the Ukrainian ethnic group. There is very little published academic research on Ukrainians in the U.S. The idiom in physical sciences that “nature abhors a vacuum” also applies to the social sciences. As demonstrated in the example above, if this research is not done by Ukrainians, then somebody else will do it for them.

The Center for Demographic and Socioeconomic Studies of Ukrainians in the U.S. at the Shevchenko Scientific Society was created to try to change this situation. Researchers there have constructed an extensive database with official data on Ukrainians in the U.S., starting with the 1920 census. The most current data is for 2018 and there are plans to update the database next year with the 2020 census and survey data. The database is available for interested researchers. It has very detailed data on the demographic, social, economic and cultural characteristics of Ukrainians in the U.S. For example, the occupation data presented here can be analyzed in more detail by age, sex, year of immigration, and use of language at home for each state for many metropolitan areas.

Additional information about Fourth Wave immigrants
Some data on the Fourth Wave can be found at the web site of the Center for Demographic and Socioeconomic Research of Ukrainians in the U.S. (Center) of the Shevchenko Scientific Society (http://www.inform-decisions.com/stat). The “Atlas of Ukrainians in the U.S.” has maps about the distribution of Fourth Wave immigrants by state and metropolitan area (http://shevchenko.org/books/atlas-of-ukrainians-in-the-united-states-demographic-and-socio-economic-characteristics/). A general overview of the Fourth Wave of migration can be found in the article in “The Annales Universitatis Paedago­gicae Cracoviensis” (http://shevchenko.org/wp-content/uploads/2019/03/Demographic-Historical_analysis_Wolowyna.pdf).

Oleh Wolowyna is Director of the Center for Demographic and Socio-economic Research of Ukrainians in the U.S. at the Shevchenko Scientific Society, and research fellow at the Center for Slavic, Eurasian and Eastern European Studies at the University of North Carolina at Chapel Hill. He can be reached via email at olehw@aol.com.